A big week in FX; AUD may bounce

Among many contenders, the biggest story of the week in financial markets is the melt-up in the USD. It has gone from strength to strength since around the middle of last week. The drivers have rotated from a drop in the CNY with covid lockdowns, a drop in the EUR on energy crisis fears, volatile equities on earnings reports and global risk aversion, and a fall in JPY on double-down BoJ policy accommodation.

EUR at key supports and risks are two-way

The drop in EUR to around its previous lows in 2016 was led by a collapse in the real 10-year yield spread in the first weeks of April to a low on 19-April. While it is deeply negative and might allow a further decline in the EUR, the spread has lifted somewhat in the last week or so. 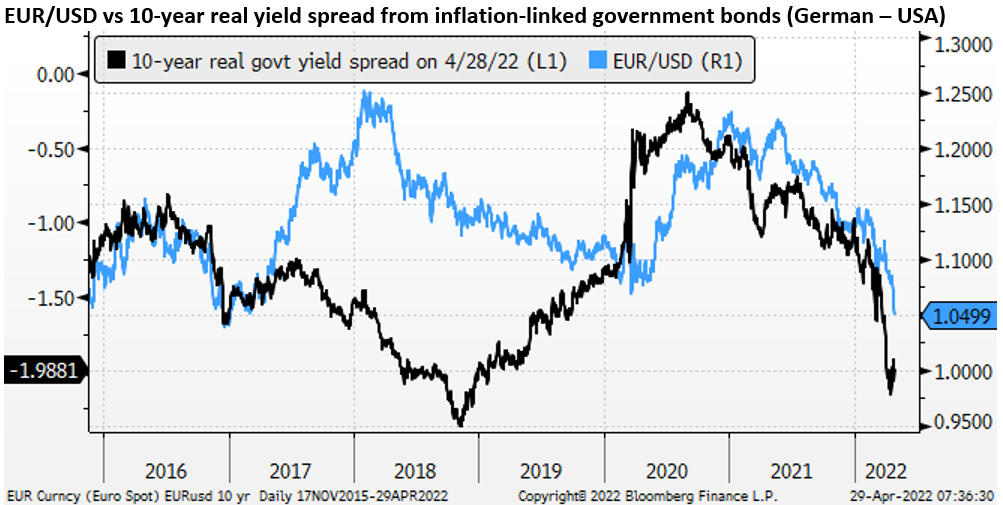 It is far from clear that the EUR will fall much further as it finds support around the previous major lows in 2016, around 1.05. However, there remains considerable uncertainty over the state of the war in Ukraine and energy supplies in Europe. The threat to LNG supplies this week has jumped significantly. There is both upside and downside risk.

JPY is cheap, but fundamentals have deteriorated

The jump in USD/JPY over the last two months is consistent with the sharp rise in the 10-year yield advantage. However, the yield spread is not extraordinarily high over the last 20-years, whereas the USD/JPY is at a high since 2002, and the JPY is at a historical low in real-effective terms.

The data on the 10-year real yield spread is not as consistent going back more than a decade, but it has followed a similar pattern to the nominal yield spread and is only back to a high since 2019 and somewhat below its average level from 2013-2019.

The yield spread peaked so far on 19-April, so while the jump in USD/JPY is consistent with the rise in yields over the last two months, it has extended in recent weeks without a further increase in the yield spread.

The JPY appeared to gain some support from global risk aversion through the middle of this week, but overall, it has failed to gain much traction as a risk haven this year. Stronger equities in recent days have given the USD/JPY clearer air to rise on the wider yield spread. 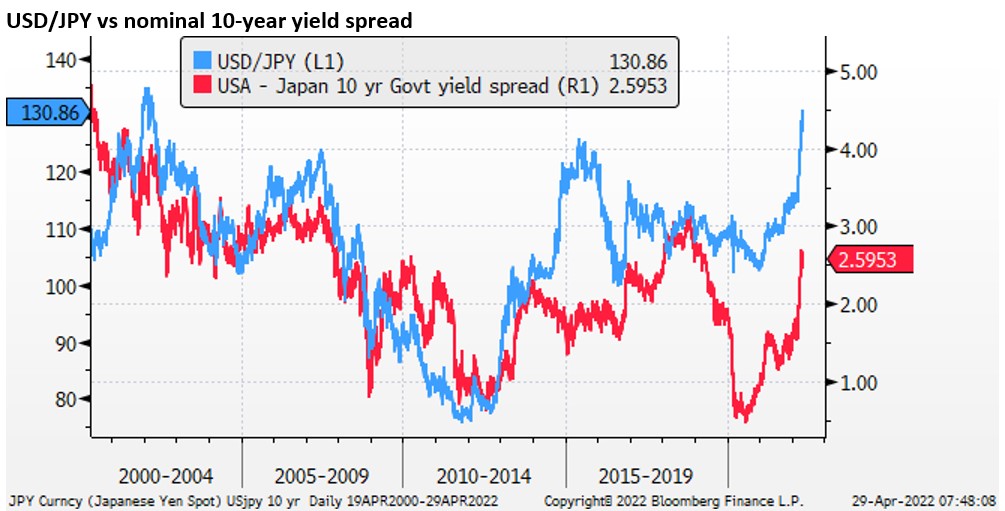 The diminished safe-haven attributes of the JPY might help account for its weaker performance this year. The BoJ’s Yield Curve Control policy in the face of rising global yields has called on them to increase the pace of its QE bond purchases at the same time as the US has stopped buying bonds and is expected to begin QT next month. Furthermore, Japan’s current account surplus is around its lows since 2014. Import value has surged on higher energy prices. 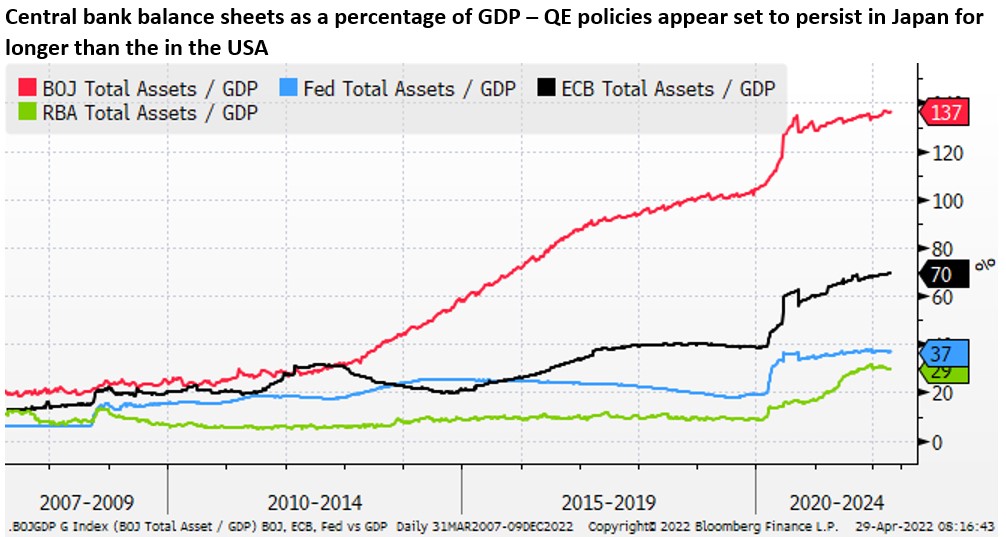 The rapid further fall in the JPY may also reflect the sharp drop in the CNY since the middle of last week. Both Chinese and Japanese policymakers may be feeling the competitive pressure from the fall in the other’s currency. The fall in JPY over recent months may have helped trigger the recent drop in CNY, and the recent drop in CNY may have fueled further weakness in the JPY in the last week. Both currencies have been the weakest in Asia recently.

The relative QE policies, the fundamental risks for CNY, and the weaker Japanese terms of trade on higher energy prices are downside risks for the JPY.   Volatile equity markets are providing only modest support for JPY. On the other side, the JPY already looks extremely weak and may need a further widening in the yield spread to justify significant further weakness.

CNY may remain under pressure

The usually impeccably steady CNY has crashed by its standards since the middle of last week, the weakest Asian currency recently. However, the CNY had it coming. Yield support has dropped and reversed across much of the curve against the USD as monetary policy has diverged. Chinese equities have been in a bear market, and China has been dealing with a property sector crisis for over a year.

The market has tended to give the CNY a pass over the last year since the currency is so heavily managed. China retains a balance of payments surplus, and its capital markets attract long term capital inflows due to its super-power status as its capital markets open.

However, the war has caused a significant jolt in perceptions of geopolitical risks. Chinese government policy has become more autocratic, reflected in its dealing with covid and big tech companies in China.

The tide had shifted between the US and China during the Trump administration. The Russian/Ukraine war is likely to generate a more adversarial state between the West and China. Trade and investment between them may grow much more cautiously from now on.

The handling of Covid has been the most significant near-term trigger for a collapse in CNY. Confidence in the government’s capacity to manage the virus with lockdowns has dropped sharply. Much of the Western world has moved on and is living with covid. Lockdowns in Australia failed to contain the virus last year and were ditched after an accelerated vaccine take-up. China appears not to have learned the lessons from abroad.

How China manages covid has become a major issue. The market fears persistent and rolling lockdowns in China, raising expectations for further significant policy easing in China, and undermining confidence in the CNY and equities. It also raises fears of prolonged or renewed supply chain disruption globally that may weaken global growth and raise inflation expectations, undermining global equity markets. 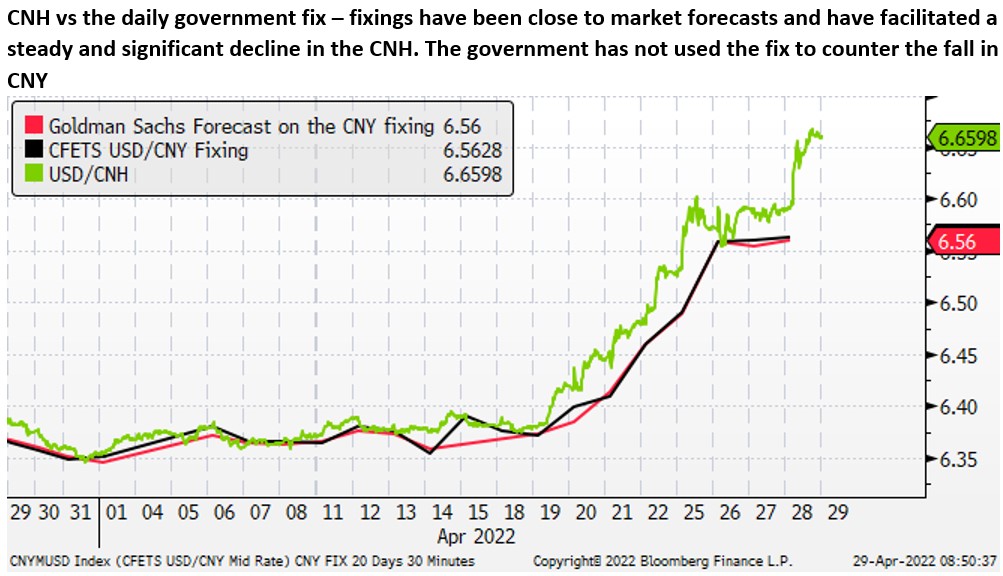 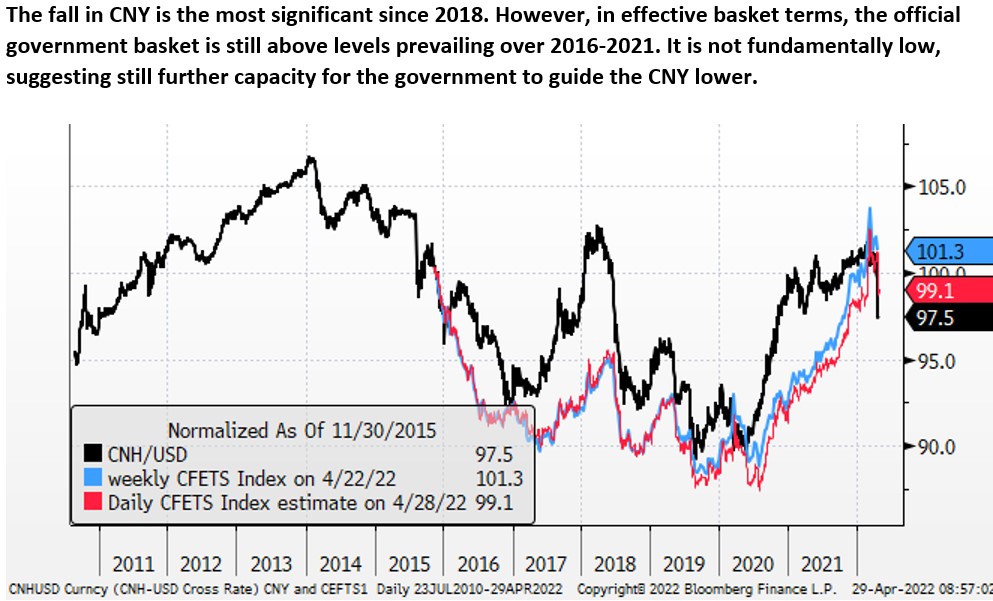 The Chinese government will be mindful not to let the fall in the CNY trigger a severe financial market upheaval in China, as occurred in 2015. However, the CNY is still relatively expensive, above its effective basket levels from 2016 to 2021. As such, the government could continue to guide the CNY lower for some time to help ease monetary conditions in China. This may exert broader upside pressure on the USD.

However, the fall in CNY should be seen as driven by its fundamental domestic problems and may not drive ongoing broader weakness across all other currencies against the USD. It might be more of a drag on larger Asian manufacturing exporters. Sure enough, we have seen relative weakness in KRW, TWD, MYR, and THB that tend to correlate more with the CNY. Conversely, INR, IDR and PHP have been more stable recently, even though they are often considered the more risk-sensitive currencies. 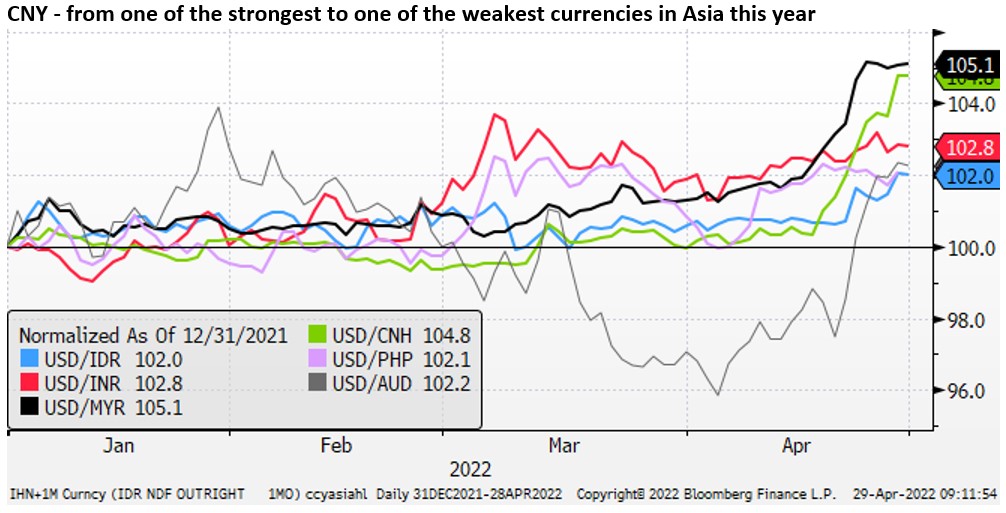 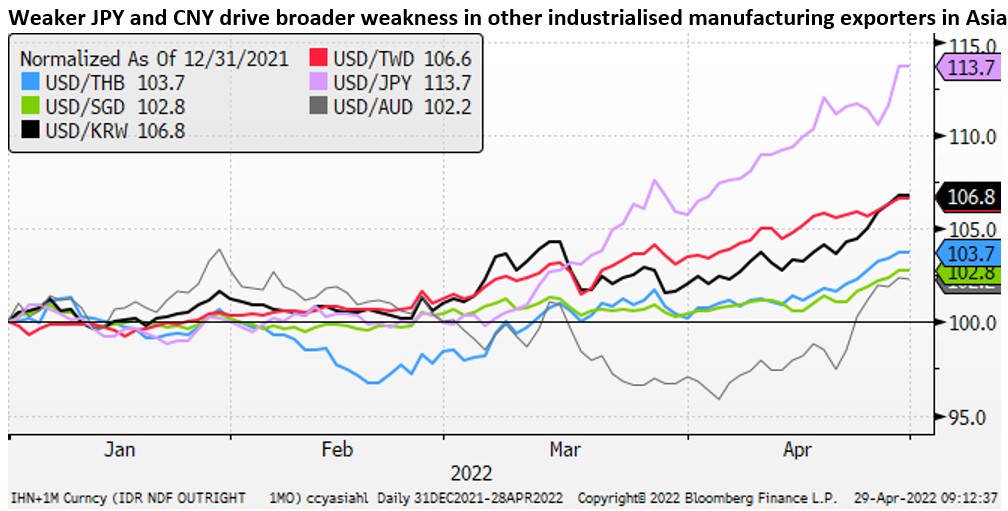 AUD may bounce from the lows this week

The AUD has had a rapid reversal from one of the strongest currencies in early April on higher commodity prices driven by the war to be down sharply as a proxy for China and global risk.

However, China is planning increased infrastructure spending to help reach its GDP growth target. This may help support iron ore prices that have stabilised in recent days after a sharp fall on China covid slowdown fears.

Despite its higher risk sensitivity, the AUD is supported by a much stronger external and fiscal balance than the USD.

Rate hike expectations by the RBA, starting next week, have lifted over the last week, boosting the AUD/USD yield spread. In real terms, the 10-year spread has lifted in recent months as long-term inflation expectations have lifted more in the USA than in Australia. 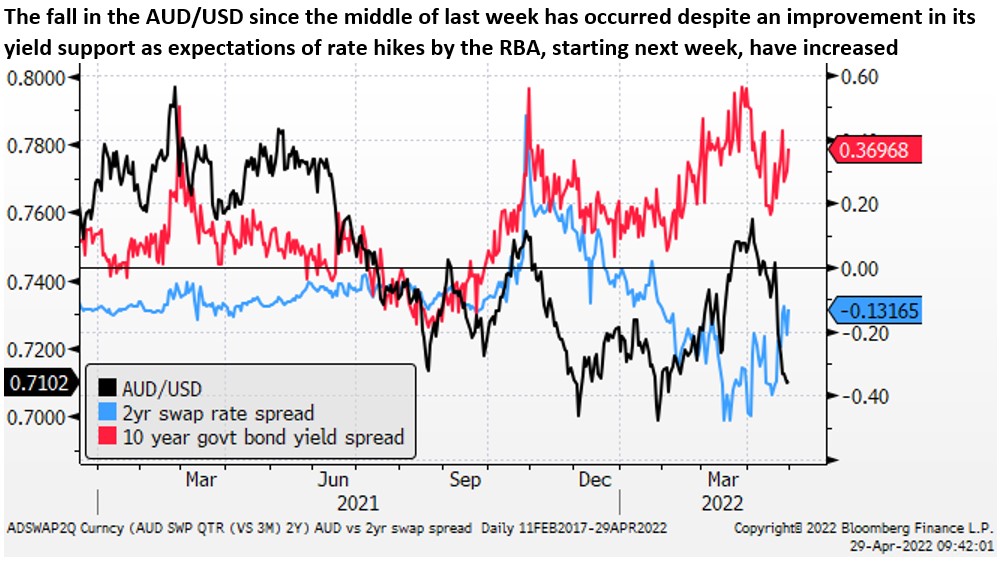 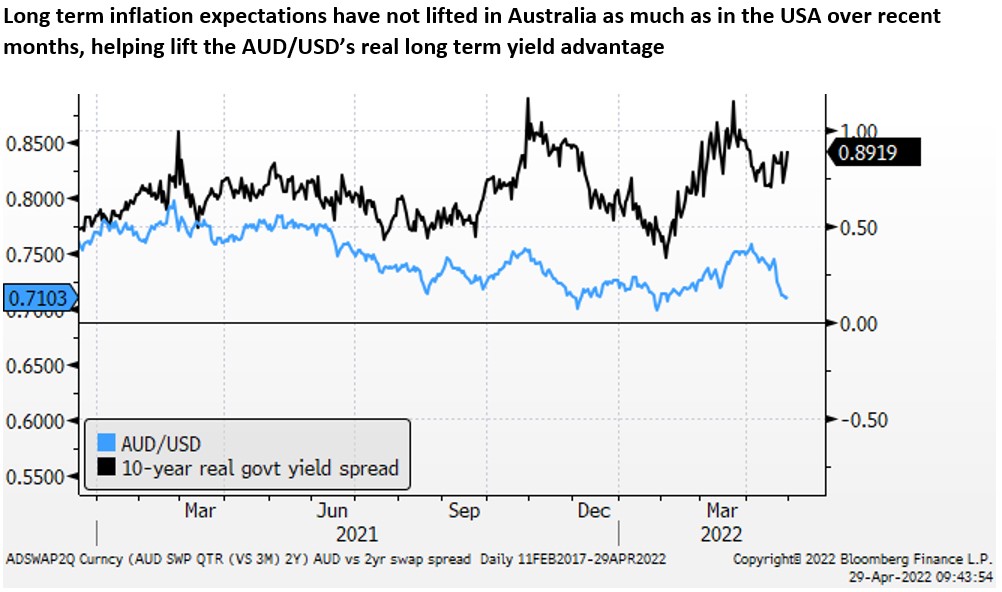 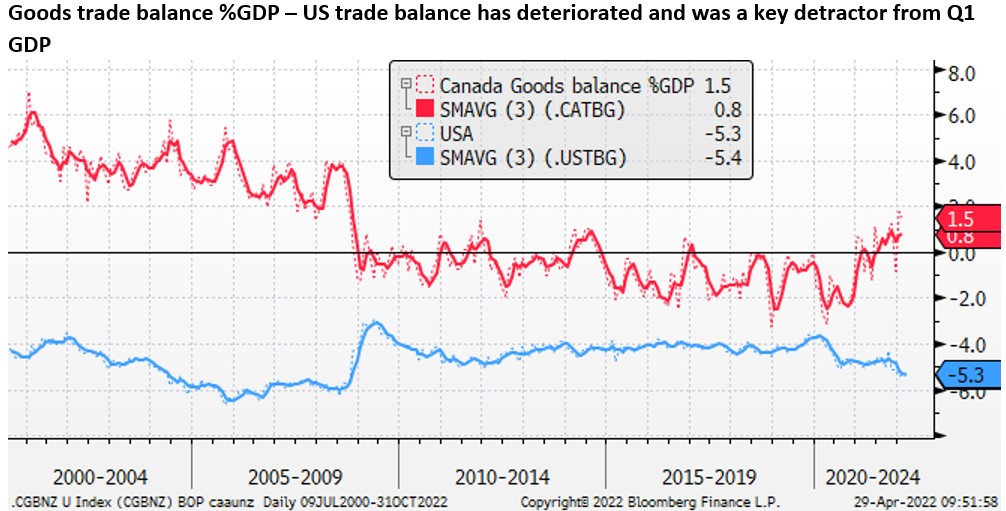