FOMC lowers its sights on the USA’s future glory

The FOMC was significantly more dovish than expected and might keep the USD on its recent weaker path for the time being. The dovish surprise came in the FOMC member projections for rates, growth, inflation and unemployment.  Their rates outlook was lowered significantly both in the near term and over the medium and longer term, suggesting they are less optimistic over the longer term productive capacity of the US economy.  They also lowered their forecasts for inflation (despite the recent higher than expected outcomes).  It appears that the Fed have been more influenced by the recent lower wages outcome in the last payrolls report, lowering their forecast for unemployment in the medium and longer term, suggesting that they see less wage pressure and more slack than previously forecast in the labor market. The FOMC press statement also did not restore its assessment that risks for the economy were balanced, and noted their concerns over a weaker global outlook.  The FOMC statement and forecasts suggest that it may be willing to look through evidence of near term strength in activity and higher inflation outcomes seeking clearer evidence that the US economy is still on a sustained trajectory towards higher inflation in the face of weaker global developments.  But of course they remain responsive to economic data and their view may be tested if recent strong labor indicators spill over to higher wages and inflation data continue their recent trend higher.

The US rates market has responded quite significantly to the FOMC meeting; 2yr swap rates are down 10bp, 2yr Govt yields are down 10.5bp and 10yr yields are down 6bp.  Not surprisingly then, the USD is broadly weaker and gold has rebounded by 2.5%.

Fed fund futures yields are down 10 to 11bp in the first quarter of next year.  Jan-17 Fed funds are now at 0.615, compared to 0.37% currently (roughly half-way between the current 0.25 to 0.50% Fed target), implying that the market expects about one policy tightening by the end of this year.

The market is pricing no chance of a hike at the next meeting on 27 April, and the odds of a hike on 15 June, the next quarterly review including the FOMC’s 3-year and long run projections, is now roughly 40%, down from around 66% ahead of today’s FOMC

The market’s pricing in the rates curve not just this year, but over the next few years has long been well below the Fed’s projections and nothing has changed on this front.  The Fed has significantly lowered its projected rate hikes in the statement today, but these still remain above those implied by the market curve by a significant margin.

The market has been proven more accurate over recent years, with the first rate hike by the Fed delayed on a several occasions and again this year they have stalled in making their second rate hike, originally slated for this month.

Nevertheless, probably the most significant dovish surprise in the FOMC today is the downward shift in the FOMC’s rate projections.  From their last projection in December, the Fed sliced 0.5% (2 rate hikes) off its projection (median of 17 member forecasts), not just this year, but also in 2017.

The FOMC has effectively adopted a more subdued view of the economy over the medium and long term.  These are the medians of the FOMC members’ projections and do not equate to a probability estimate with fan-charts that some central banks employ.  They are influenced by a relatively small group of 17 individuals shifting their views, rather than deeper robust analysis by the Fed staff. Nevertheless, they leave the market with an impression that the Fed is considerably less optimistic over the long term productive capacity for the US economy.

It is virtually impossible to predict what will make the Fed move medium and long run forecasts in this way from one quarter to the next; such medium term forecasts should not be much influenced by the data that is released over a few months.  These downward revisions are one of the surprise elements that helps account for the sizeable market reaction.

Dovetailing with these downward revision in rates across the FOMC horizon is lower GDP forecasts and lower core inflation forecasts.  It may seem odd in particular to see the core PCE inflation forecast for the current year unchanged at 1.6% since December after the recent higher than expected readings for Jan this year (1.7%y/y, higher than 1.5% expected, revised up to 1.5% in Dec from 1.4%).

Furthermore, the core CPI inflation reading released today just ahead of the FOMC meeting announcement rose to 2.3%y/y in Feb, above 2.2% expected, up from 2.2% in Jan. 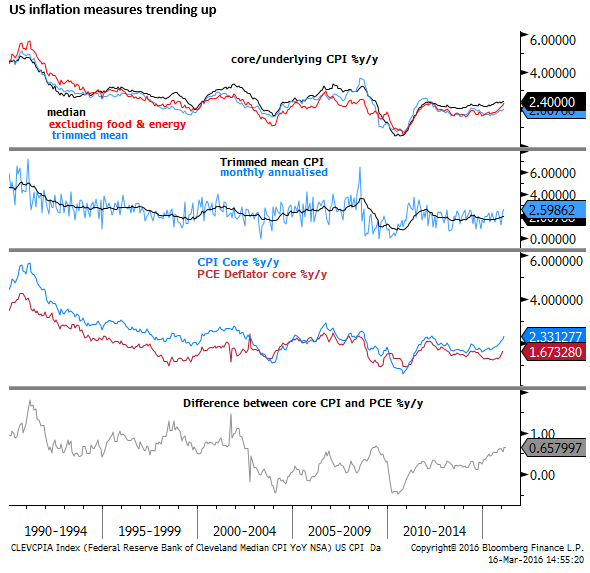 One might have anticipated that the FOMC would have increased its inflation forecast at least for this year based on recent actual outcomes.  But it has not, and instead it lowered its forecast for core PCE inflation next year from 1.9% to 1.8%, seeing less inflationary pressure, not more, even though actual inflation is on a rising trend.

In its press release today, the FOMC did make a passing reference to these higher inflation outcomes.  It said, “Inflation picked up in recent months”.

Jon Hilsenrwath, Fed watcher at the WSJ, noted in his commentary today that recent Fed studies found inflation readings tend to be high in the first half of the year, and recede later in the year.  And he recalled quotes from Yellen recently including that she was “wary” about concluding inflation is really trending up.

A surprise in the Fed projections today is that the Fed appears largely un-moved by recent higher inflation outcomes.  This is indeed a reason to view the FOMC as a more dovish institution that may allow inflation to overshoot its target more than  might otherwise be the case, and a reason for the market to buy alternatives to the USD, such as gold; one of the big rebounders today.

So in the next few years the Fed is now projecting unemployment falling more significantly below neutral, but is nevertheless unperturbed.  This implied that now sees the Phillips curve (the relationship between slack in the labor market and wages or inflation) as flatter.  More simply it is not seeing much of a pick-up in wages as unemployment falls in the next few years.

Furthermore, it now sees the neutral rate of unemployment (the long run rate) as lower than before.  It was only a couple of year ago that the FOMC thought this above 5.0%, now it has pegged it at 4.8%.  As such it sees more slack in the labor market than it appeared to before this FOMC meeting.

In her press conference, Yellen said in light of “broad-based improvement in the labor market” she was surprised that there has not been more wage growth.  She said the Fed is hearing anecdotal evidence of faster wages growth but that this appears to be in isolated geographies and industries and was not showing up in broad-based official data.  She noted that the lack of wage growth in official data may have been a factor contributing to the FOMC projections of lower longer term unemployment.

One might conclude that the Fed has taken extra notice of the lower wage growth figure reported in the last payrolls report, and the Fed’s outlook may be tested if wages data that has been more volatile recently were to pick-up in coming months. 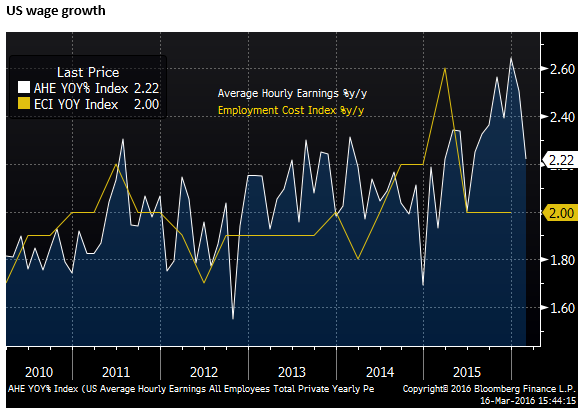 Risks still not balanced and some members see them tilted lower

Another aspects of this FOMC event that may be viewed as on the dovish side of expectations is that the press statement did not reinstate an assessment that risks are balanced.  The FOMC removed this assessment in January, understandably in the face of greater global market uncertainty.

There was a significant chance that after the recent strong employment data, higher inflation data, significant improvement in global financial markets in the last month, and further policy easing in Europe, Japan and China, that the Fed might restore its assessment that the risks were back in balance between higher and lower outcomes for key variable such as the labor market.

She further highlighted that FOMC members could see both upside and downside risks.  However, she noted that the committee made no collective judgement.  She said some members thought the risks balanced, some thought them tilted to the downside.

An inclusion to the press statement that caught the attention of many commentators was that the Fed pointed to those global risks.  It stated that, “global economic and financial developments continue to pose risks”.  This implies that the Fed is adopting a more cautious approach to policy tightening in light risks related to weaker global growth and potential for a return to more volatile global asset markets.

One hawk among the doves

A final point that is less dovish is that one Fed President, Esther L. George, dissented from the committee. She wanted a rate hike.  However, one Fed president, known to be a hawk, is seen as an outlier likely to have limited impact of on the FOMC decisions.