Fed speakers will be watched closely, dollar-bloc commodity central banks still ahead of the Fed

Fed speakers may be key this week

The dollar went on a rampage last week post the FOMC.  Weakness in the EUR after the still dovish ECB started a weak earlier.

The FOMC meeting last week has been described by many market commentators as a significant hawkish surprise, signalling earlier expected rate hikes and the beginning of taper talks.

The rise in the median dot-plot from zero to two rate hikes in 2023 and a rise from four to seven out of 18 FOMC members anticipating at least one hike in 2022 got the market most excited.

But the dot-plot is a very clumsy signalling mechanism. As Chairs have frequently done over the years, Fed Chair Powell downplayed the significance of the dot-plot for rates in his press conference. He said that the FOMC did not even discuss the lift-off for rates, and the “conditions for lift-off are well into the future.”

There are several Fed speakers this week, including Chair Powell’s testimony to Congress on Tuesday.  He may view this as an opportunity to cool expectations that the Fed might take away the punch bowl too soon.

However, the first Fed speaker out of the blocks only reinforced the hawkish surprise.   On Friday, US short to mid-term rates rose further on comments by St. Louis Fed President James Bullard, more frequently noted as a dove, that turned out to be on the hawkish end of the FOMC spectrum.

Bullard said that he thought rates should rise by end-2022.  In doing so, he noted his forecast for core PCE inflation of 3.0% in 2021 and 2.5% in 2022, saying that would be two years of inflation of 2.5 – 3.0%.  Interestingly, he is suggesting that the Fed’s average inflation targeting strategy may look at inflation over a relatively short number of years.

However, Bullard is not part of the Fed’s core decision-makers and has often been an outlier.

The rebound in the dollar was led by a significant bump up in short to mid-term yields in the USA.  The market has come to accept that rates are unlikely to move for some months, but they are starting to see a rising interest rate cycle on the horizon.

The other surprising element of the yield moves last week was that the curve twisted and flattened significantly.  Three-year yields rose 16.2bp, 30-year yields fell 12.5bp, resulting in a 28.7bp flattening in the 3 to 30-year curve.

We spend a lot of time talking about 2-year and 10-year yields as reference points for the yield curve.  However, these points on the curve understate the developments last week.  2-year government note yields did rise by a significant amount of 10bp, the biggest one week rise since Dec-2019.  10-year yields were little changed down 1.3bp. 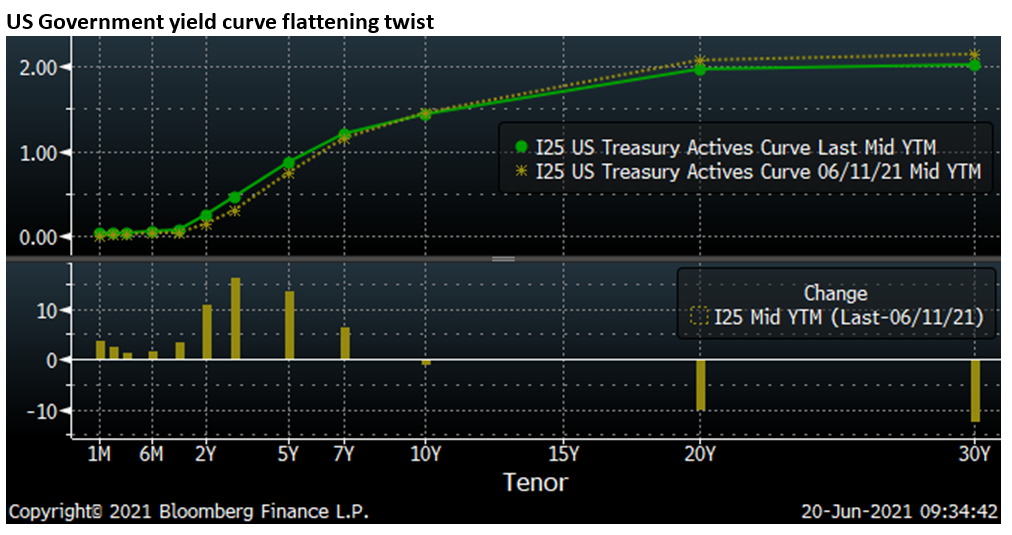 EUR turn down may be more sustained than other currencies

In contrast to the FOMC dot-plot, there was nothing in the ECB policy meeting a week earlier to suggest that it was thinking about rate hikes.  It decided to maintain its higher pace of PEPP asset purchases established in March, designed to hold down bond yields.

Following the FOMC meeting last week, on Thursday, ECB Chief Economist Philip Lane told Bloomberg TV that it is still “premature” to talk of reining in its QE bond-buying.

The ECB Governing Council met over the weekend to discuss its major strategy review that is expected to be announced later in the year.  The new strategy is expected to have elements of the Fed’s shift to an averaging inflation strategy and offer the ECB cover to extend its QE for considerably longer.  Long term inflation expectations in the Eurozone remain well below its existing inflation target.

On Friday, the ECB announced an extension its capital relief for banks by allowing them to continue to exclude deposits from their leverage ratios until March next year.  A minor development, but one that suggests it is not thinking about reducing monetary policy support.

Yield moves were much more muted for the EUR last week, allowing for spreads to move in favour of the USD. 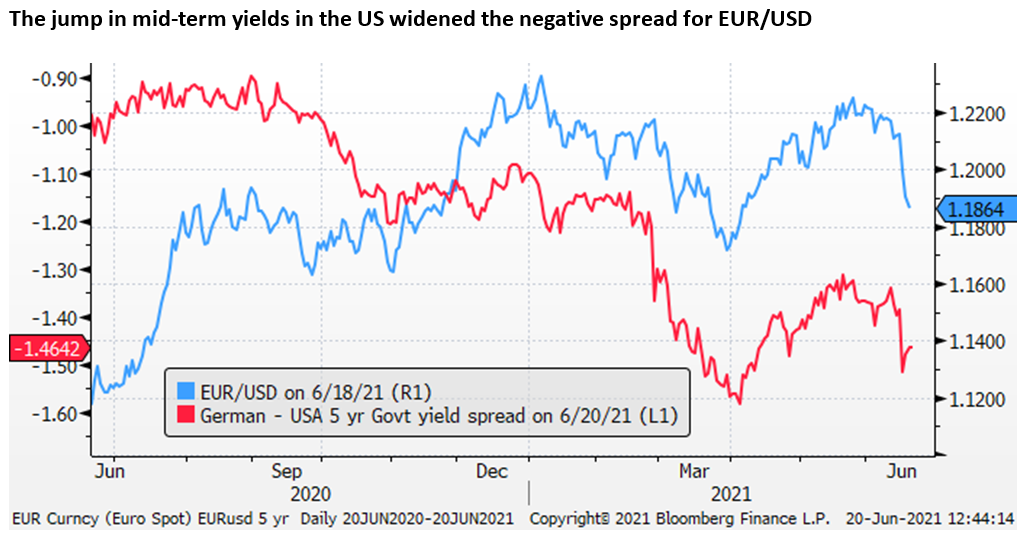 Another way to understand the fall in the EUR/USD is the extent to which the market began to price in rate hikes just beyond the next year.  The market started to factor in significantly more cash rate rises in the US over the Eurozone just beyond one year.  The chart below shows the relative expected rate rises between the 4th and 8th 3mth futures contracts.  US rates are expected to rise by 37.5bp more than Euro rates in this 12month period in just over a year from now, up from 16bp a week earlier.

Commodity currency yields lift even more than in the USA

While relative rate moves might explain the fall in the EUR, the same cannot be said for commodity dollar bloc currencies.  Yields rose similarly but even somewhat further across the short to mid terms in Australia, NZ and Canada.  Yields rose across the curve in Australia and New Zealand last week, including on long-term bonds, despite the fall in US long term yields.

The rise in yields across these countries reflected strong economic data that suggests that the three countries are ahead of the USA is reaching pre-pandemic levels of full employment.  Australia, in particular, reported a massive lift in employment in May and is experiencing the lowest level of underutilization in its labour market since 2013.

The RBA has one of the most dovish policy guidances relative to the strength of its economic rebound.  The central bank’s liaison work points to limited upward pressure on wages despite the significant tightening in its labour market. It is seeking clear evidence that wages growth has accelerated before shifting rates policy.

In Australia, short end yields are anchored by the RBA’s 0.10% three-year bond yield target currently attached to the April 2024 government bond.  However, several market economists have brought forward their first rate hike calls ahead of this date.  The latest was Westpac’s closely watched Bill Evans that released a report on Friday predicting a hike in early 2023.

Even if the RBA holds out to April 2024, the market predicts a faster pace of hikes after that.  In May, the RBA said it would decide in July whether to roll forward its 3yr yield target to the current benchmark three-year November-2024 bond.  Yields on this bond jumped sharply last week, suggesting any thought that it would extend its yield target had dissipated. 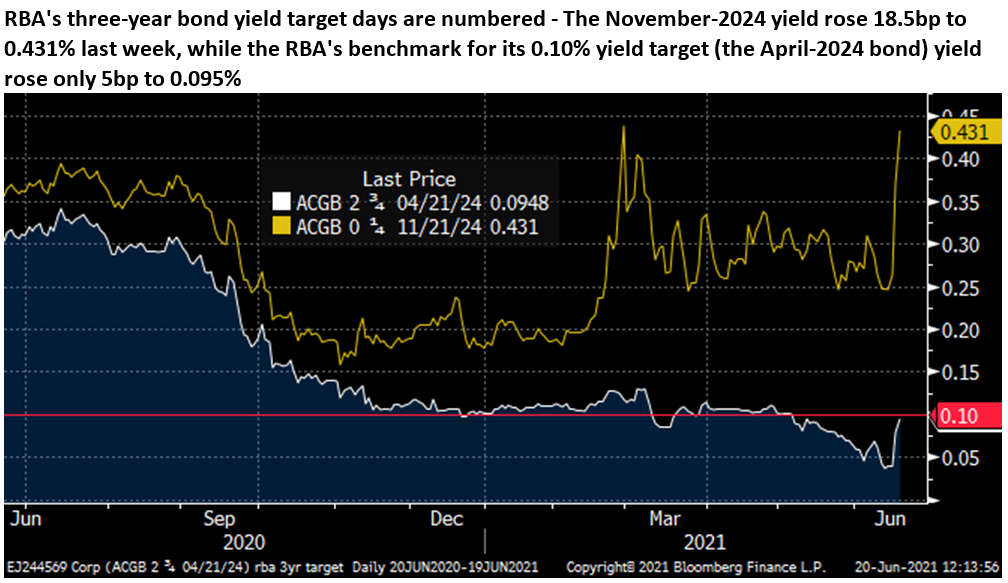 Risk appetite down but not out

Commodity and EM currencies were routed along with the EUR last week in a broad rebound in the dollar.

Some of this appears to reflect fears that global monetary conditions might tighten via both higher US interest rates and a stronger USD.

However, a good part of the jump in the dollar and correction in equity markets may reflect excessive positioning.  Sharp moves may have triggered stop losses in positions in commodity currencies and cyclical equities that have performed well over the last year.  A good deal of the post-pandemic recovery trade may have already been priced into the market.

There have been other developments that have taken the heat out of commodity and EM markets this year.  Commodity prices have fallen sharply from multi-year peaks in May, reversing steep rises earlier in the year.

Chinese policymakers stepped up their efforts to contain commodity prices last week, announcing that it would release supplies of base metals from its strategic reserve.

This year, China has also worked harder to contain exuberance in its stock market and address excessies in its credit markets.  Chinese growth momentum has slowed somewhat this year.

As such, commodity and EM currencies were perhaps vulnerable to a correction and reacted more significantly to the shift in tone by the Fed last week.

However, the Fed and other central banks are still highly focused on underpinning strong economic rebounds to heal their economies from the pandemic recession.  Governments are providing more stimulus through increased spending on infrastructure and supporting business investment while gradually removing pandemic relief spending.

The dollar may have firmer underpinnings as the Fed shifts its policy guidance, but the lift-off for rates is still some time off and highly uncertain.  The Fed is likely to taper QE policy cautiously and is yet to set a date and strategy for doing so.

The recent correction in commodity prices has cooled inflation expectations.  It may also reduce the fear that the central banks may overreact to the recent spike in inflation outcomes.

While attention on Fed policy increased sharply last week, dollar bloc commodity countries’ central banks, particularly the BoC and RBNZ, have moved their rate hike guidance into potentially 2022.  The RBA is lagging their moves, but its labour market is flashing clearer signals that wage pressure may develop soon, and its housing market is white-hot.

As such, we may see these currencies recover from losses last week against the dollar, and they may be well placed to rise vs the EUR.