The Bank of Canada has significantly downshifted its guidance on rates to one that resembles the US version of patience, and a long pause.

Its policy guidance (last) paragraph began with the “Governing Council judges that the outlook continues to warrant a policy interest rate that is below its neutral range.”

On 9 January it led off with the “Governing Council continues to judge that the policy interest rate will need to rise over time into a neutral range to achieve the inflation target.”

Arguably a significant shift in emphasis.

It continued today with, “Given the mixed picture that the data present, it will take time to gauge the persistence of below-potential growth and the implications for the inflation outlook. With increased uncertainty about the timing of future rate increases, Governing Council will be watching closely developments in household spending, oil markets, and global trade policy.”

This suggests they retain an expectation that rates are more likely to rise, eventually, but are expected to remain on hold for an extended period.

In January, the Bank had softened its tone but remained relatively optimistic that rate hikes were likely in 2019.

In its statement today, the Bank noted that the Q4 growth “slowdown” was “was sharper and more broadly based”  than it expected in January.  It said, “After growing at a pace of 1.8 per cent in 2018, it now appears that the economy will be weaker in the first half of 2019 than the Bank projected in January.”

The Bank was firm in its view that US-China and broader trade tensions were “weighing heavily on confidence and economic activity”, and “global economic prospects would be buoyed by the resolution of trade conflicts”

But also noted that, “progress in US-China trade talks and policy stimulus in China have improved market sentiment and contributed to firmer commodity prices.”

Softness in the domestic economy included “Consumer spending and the housing market were soft, despite strong growth in employment and labour income”

Not unlike Australia, Canada may be facing some spillover from a weaker housing market and tightening credit conditions, related to regulatory measures, to softer consumption, despite strong employment growth.  This appears to be adding to the increased uncertainty and less confidence from the Bank of Canada that it should hike further.

The market is now pricing somewhat more chance that the Bank of Canada cuts rates over the coming year from a policy rate of 1.75%, rather than hikes further. 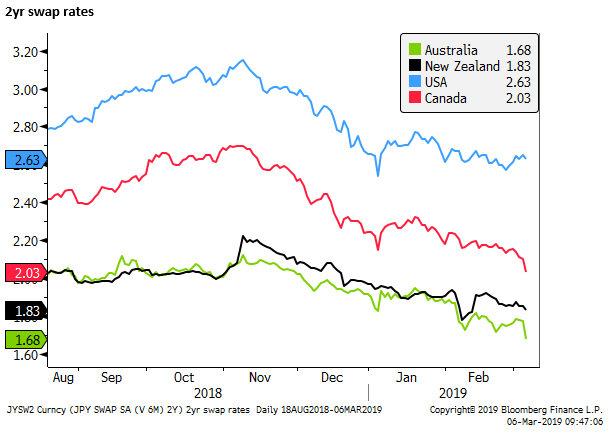 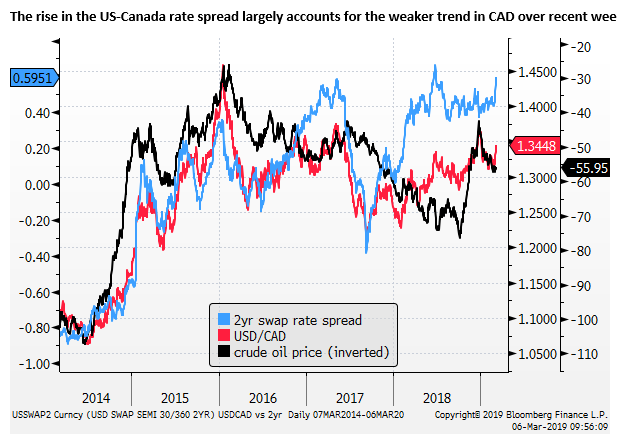 The USD/CAD has broken up out of its range over the last two months and may continue trade with a weaker bias.  However, with evidence that the US economy has slowed significantly in Q1 and the risk that US policy has also peaked, it is hard to say we should see a substantial further slide in the CAD.

There is a range of two-way risks.  Nevertheless, the outlook for the Canadain economy, like several major economies, has deteriorated significantly in the last month with a run of weaker than expected economic reports, resulting in a significant shift in Bank of Canada tone.