Commodity markets are leading some recent weakness in global asset markets.  Oil and iron ore are sitting near key supports and how they perform around these levels may be important for near term direction in global markets and commodity currencies. Market sentiment remains mixed and asset prices are not clearly out of line with the global economic outlook or policy developments.  As such, we are adopting more short term nimble trading strategies at the moment.

Market wants to hear something dovish from the ECB

Ahead of the ECB meeting tonight, the market appears to be expecting some dovish tones in the press conference from Draghi.  Most analysts expect further policy accommodation either in December or early next year. The risk is that Draghi chooses to offer few hints on the policy outlook, disappointing dovish expectations and generating modest gains in the EUR.  The currency has shown little direction lately, consolidating in the 1.13s after pulling back from a test of key resistance near 1.15 early last week.

The Bank of Canada maintained a neutral policy outlook, with a hint of an easing bias creeping in.  Seeing its role as balancing an inflation targeting objective and financial stability, it said, “The Bank judges that the current stance of monetary policy remains appropriate.”

Previously it said, “The Bank judges that the risks to the outlook for inflation remain within the zone for which the current stance of monetary policy is appropriate.” As such, they were less descriptive on Wednesday and arguably less committed to maintaining policy unchanged.

It noted risks to the outlook related to market volatility at its previous meeting on 9-Sep, but these were more clearly articulated on Wednesday in a lower forecast for GDP that does not see the economy returning to potential for almost two-years.  It also said that in the near term, growth was “more likely to be in the lower part of the Bank’s range of estimates.”

While the BoC sees policy as accommodative with strengths in non-resource sectors and exports to the US, the risks are high that inflation undershoots its objective for the foreseeable future. It said, “The Bank judges that the underlying trend in inflation continues to be about 1.5 to 1.7 per cent.” (Below the Bank’s 2% mid-point target)

The Bank of Canada said, “Lower prices for oil and other commodities since the summer have further lowered Canada’s terms of trade and are dampening business investment and exports in the resource sector. This has led to a modest downward revision to the Bank’s growth forecast for 2016 and 2017.”

“The Bank projects real GDP will grow by just over 1 per cent in 2015 before firming to about 2 per cent in 2016 and 2 1/2 per cent in 2017. The complex economic adjustments to the decline in Canada’s terms of trade will continue to play out over the projection horizon. The weaker profile for business investment suggests that, in the near term, growth in potential output is more likely to be in the lower part of the Bank’s range of estimates. Given this judgment about potential output, the Canadian economy can be expected to return to full capacity, and inflation sustainably to target, around mid-2017.”

Governor Poloz was careful to remain balanced on the rates outlook, currency and influence of possible fiscal expansion from the new government in his press conference.

The weaker oil price trend, the downward revision in the Bank’s GDP forecasts, more risk that GDP lands in the lower half of these forecasts in the near term, and a below target core inflation trend has contributed to a weaker CAD.

Both oil and iron ore prices are at key supports and how they perform around these supports may provide an important guide to asset and currency performance in coming weeks.  Equites in these sectors have also led recent falls in global markets and reports from China that a state owned steel company is delaying interest payments on its corporate bonds has contributed to downside risks.

Global markets have lifted in October after significant weakness in Q3, but have stalled in the last week.  It appears that investors may seek value in times of stress, perceiving global central banks’ policy as still very accommodative, but the ‘search-for-yield’ that has been an enduring feature of global markets since 2009 appears to be more permanently diminished.

It may be the case that we are moving into another bout of weaker global asset market performance.  However, we fail to see a clear theme developing.  Market sentiment remains mixed and asset prices are not clearly out of line with the global economic outlook or policy developments.  As such, we are adopting more short term nimble trading strategies at the moment. 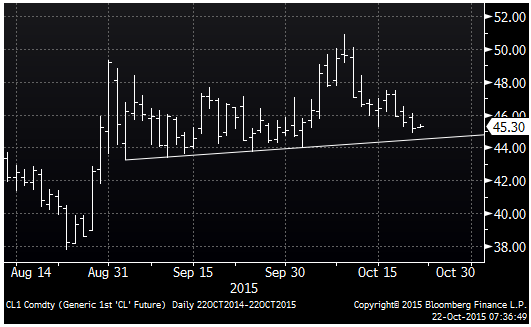 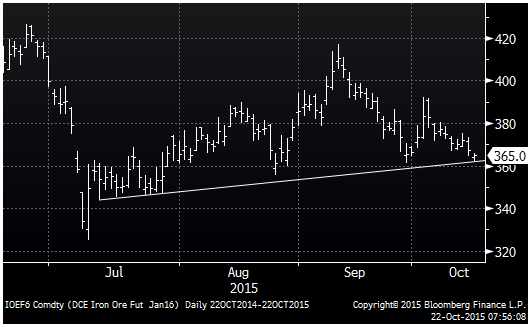 The chart below of Exchange Traded Bond Funds illustrates the diverging nature of different risk segments of global bond markets.  In particular high-yield corporate bond prices have been falling since mid-2014 (around the time talk of higher US interest rates and a stronger USD trend took hold).

After a period of reprieve from mid-Dec-2014 up to around June this year, high yield bond prices have fallen more rapidly in the second half of this year, at the same time as US Treasury prices have been rising (yields falling), accentuating the rising spread between the two and thus rising risk premium.

This period is noticeably different from the 2013 taper tantrum.  At that time, all bond yields were rising (prices falling) and in fact high yield bonds out-performed US Treasuries.  Risk premia for corporate bonds were more stable, and most of the rise in risk premia occurred in emerging market bonds.

However, since around April this year there has been increasing divergence and rising risk premia for all segments of the bond market.  This has been most pronounced for high yield corporate bonds, although emerging market bonds have also experienced more significant weakness and investment grade bonds have significantly lagged Treasuries.  It appears that the ‘search-for-yield’ that had been an enduring feature of the markets since 2009 has faded on a broad and persistent basis since mid-2014 and more rapidly since mid-2015. 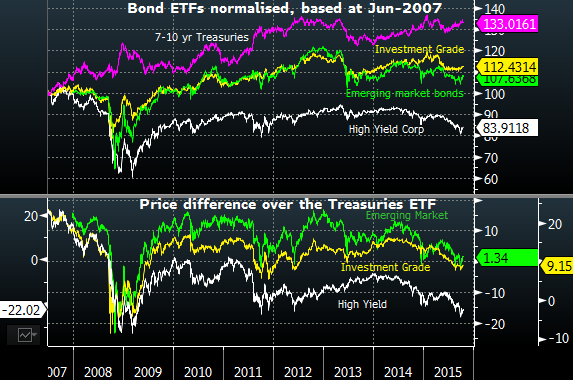 We have seen some bounce back in higher yield bond prices and narrower risk premia since around the end of September, around the time that the Fed decided to push-back its rate hike timing, but at this stage the trend in place for around 16 months has been widening risk premia and many sense that a return to the so-called ‘search-for-yield’ has suffered irreparable damage.  Higher risk premia may be here to stay.

The weakness in high yield bonds has been most apparent in the commodity space, undermined by what many see now as persistently lower levels of energy and metals prices undermining fringe companies in this space or those that leveraged up too much.  Higher levels of corporate and household debt ratios in emerging markets has also been highlighted by the IMF.

The ECB and Japan ramped up their QE programs in late 2014 and early this year and this may have contributed to a period of narrowing risk premia ealier this year, but the steady progress towards higher US interest rates and a stronger USD appears to have been a more powerful influence on global markets.  The presumption is that since the USD is the denominator for much international financing, a rising USD had a more substantial influence on global monetary conditions.

More specifically capital outflow from China, and other emerging markets, in part a response to a stronger USD trend against these currencies, has resulted in declining FX reserves in emerging markets, essentially tightening domestic monetary conditions in these countries.

China has been easing domestic monetary policy to counter the effective tightening that may have arisen from a stronger USD and capital outflow, but its economy is suffering the consequences of its own problems of high domestic debt levels and excess capacity in industrial sectors, as such its monetary easing has had limited capacity to support global asset prices and counter the effective policy tightening in the USA.