A reprieve for the EUR, but not a game changer

Stronger Eurozone Q1 GDP and German CPI suggest that the ECB need not rush to ease policy further.  However, these data points appear to be largely payback for weak previous outcomes.  More current business surveys suggest that there is no clear path back to above-trend growth.  The EUR downtrend may persist if the market continues to seek higher-yielding assets in an environment of stable or falling in global yields and credit spreads.

The most-watched measures of US inflation have fallen, but there is a divergence in underlying measures and the lesser watched, but perhaps more indicative measures, have increased. The US labour market still appears tight, and the market and the Fed might be premature in writing-off inflation.  However, the Fed would welcome higher inflation, and US rates are expected to remain stable for the foreseeable future.

Breathing room for the ECB

EUR received, on the face of it, some pretty good news on Tuesday; including stronger than expected Q1 GDP, a new low in the unemployment rate, and a sharply higher than expected CPI in Germany.

Comments from analysts were mostly along the lines that the ECB has been given some breathing room and does not need to lengthen its rate guidance further, lurch towards very favourable terms on its forthcoming TLTRO (III), or introduce rates tiering at its next policy meeting in June.

It appears that the market and the ECB perhaps became too bearish about the outlook for the Eurozone economy in recent months. However, the outlook still appears to be mixed.

The bounce in German CPI inflation appears to be largely a pay-back for a low March outcome, driven by the late arrival of Easter in April compared to a year earlier, causing a seasonal anomaly.  The other nations’ CPI in the region that have been released were close to expectations.

Nevertheless, it does lift the inflation outlook from recent months.  The Eurozone CPI data is released on Friday.  The market is expecting a rise in CPI headline from 1.4 to 1.6, and a rise in the core from 0.8 to 1.0.  After the German data, there appears to be upside risks to these forecasts. 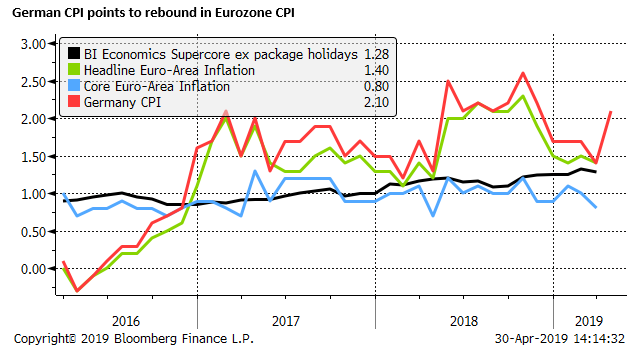 Rebound in GDP at odds with business surveys

The rebound in Q1 GDP in the Eurozone is at odds with business surveys for the region that have generally remained low; current condition indices made new lows in April.  The Q1 GDP in part reflects a rebound from a very weak H2-2018, consistent with a rebound in industrial production figures in Jan/Feb.  However, the survey data suggests that the bounce in Q1 will not necessarily extend into Q2.

In lesser data for the Eurozone on Tuesday, Portugal was the first country in the region to release its industrial production for March.  It is not necessarily a great bellwether for the rest of the region, but it dropped sharply to -7.6%y/y in March, suggesting that the recent rebound in regional IP in Jan/Feb may not have extended into March, pointing to a possible downward revision to Q1 GDP.

EUR/USD has been largely unresponsive to a narrowing yields disadvantage

The EUR/USD has not been very responsive to a narrowing in its yield disadvantage over the last six months.  In fact, it has largely continued to drift lower despite this narrowing. Nevertheless, the stronger than expected Eurozone data on Tuesday has helped further narrow the spread.

US yields retreat in recent weeks

Overall, the EUR/USD spread narrowing has been driven by a bigger fall in US yields, rather than rising German yields. And US yields have slipped somewhat further in recent days, including after the mixed US Q1 GDP report last Friday, and a lower than expected core PCE deflator inflation report on Monday.

The rates market is pricing in significant risk of a cut in the Fed’s rate target; almost a full 25bp cut is priced in by the end of 2019. 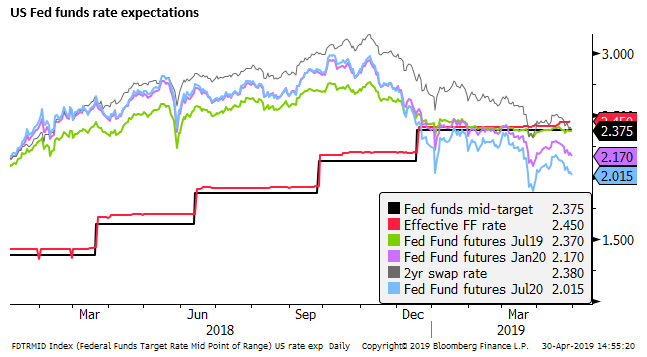 In general, lower US yields have not been that influential on currency markets, with the USD remaining stable to stronger.  Nowhere is this more evident than in the EUR/USD.

We have noted in recent reports that this may reflect a grab for yield in a generally declining yield and credit spread environment in recent months.  The high absolute level of US yields compared to other developed and many emerging market currencies is tending the support the USD.

EUR/USD more responsive to the level of German yields

We have noted that the EUR/USD has been more closely correlated with the level of German yields in recent months, rather than the yield spread to the USA.  A deteriorating economic outlook for the Eurozone has contributed to falls in German yields, albeit modestly as their downside is relatively constrained by the reluctance at the ECB to further push rates into negative territory. 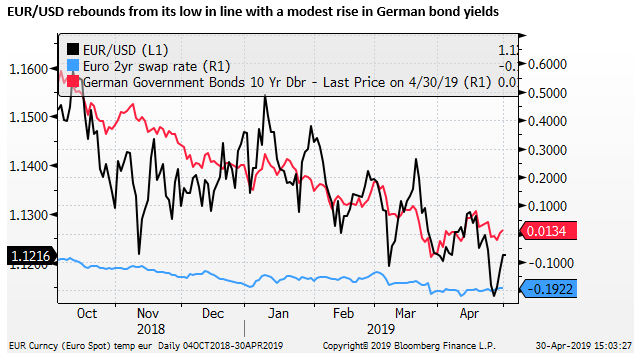 EUR fails in either a risk on or off environment

German yields fell this year as the exit from the ECB’s NIRP appeared further out of reach, encouraging the notion that the EUR might be considered a good funding currency for carry trades.

At the same time, the EUR has also appeared to be a risk-sensitive asset, falling as the Eurozone’s economic performance slumped in response to the weaker global demand for its exports.

As such, lately, it has seemed that the EUR had nothing going for it. It has weakened in a periods risk aversion associated with weaker global growth, and has continued to weaken in periods of improving global confidence and firming asset markets, attracting sellers seeking a funding currency for carry trades.

The slide in the EUR last week followed weak Eurozone business surveys and softer credit growth. There was also some widening in periphery sovereign spreads on political infighting in Italy and uncertainty heading into the Spanish election last weekend.  Turkish financial markets were under pressure, and Deutsche Bank and Commerzbank ended merger talks raising questions about the future of both banks, and the struggles of European banks in general.  EUR fell to a new low, adding to bearish momentum.

However, the strength in the USD, while apparent, has not been particularly powerful, and lacked clear new drivers as US yields drifting lower.

The US GDP report last week failed to impress with the growth in final demand for domestic producers (excluding inventories and net exports) falling to +1.4% q/q SAAR, even though GDP rose 3.2%q/q.

The Fed’s most-watched core inflation measure has slipped further below target (1.6%y/y in April).  The Fed is expected to retain a patient policy guidance on Wednesday. 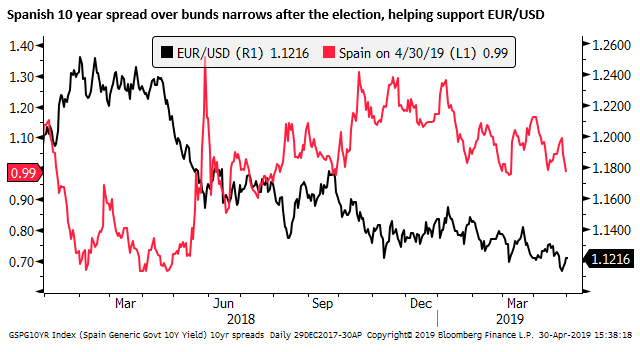 EUR upside may be limited

The case for higher yields in Germany remains low, the economic data may not be as dire as thought a week ago, but a return to sustained above-trend growth also remains elusive.  There is not enough in the recent data to suggest that the EUR should break up out of its downtrend.

However, that trend has been choppy and gradual, and it is quite possible that the EUR could rise further in the coming sessions.  In the low 1.12s, it appears about mid-range in a declining channel 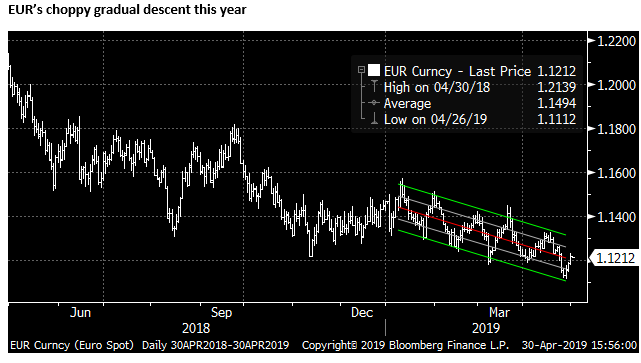 Key events on the horizon that may affect the EUR include the Global PMI data on predominantly Wednesday, including the US ISM, FOMC on Wednesday, US payrolls on Friday, Eurozone CPI on Friday.

We have no strong reason to expect the FOMC to move the market; although we can’t be sure how Powell will play it at his press conference.  President Trump has pushed again for rate cuts on the eve of the FOMC, and Powell will be certain to field questions on the President’s call for lower rates.

Powell may also be asked whether the Fed should cut rates to push up inflation and inflation expectations; especially in light if the recent fall in inflation data.

The Fed has already shifted its rhetoric to suggest that it is now more focused on addressing the persistent under-shoot of inflation.  However, the Fed is likely to remain quite confident in an outlook for solid, sustained growth in the economy and prospects for solid wage growth.  As such, the over-riding message should be that rates are on hold for the foreseeable future.

If Powell appears to remain comfortable with the current Fed-funds target, this may then tend to reinforce the high-yield advantage of the USD.  Over time, this could reinforce a relatively strong USD, in an environment where global yields and credit spreads are stable or falling.

As an aside, the FOMC may make a small cut to its IOER (2.40%) or discuss alternative arrangements to place some downward pressure on its target Fed funds rate that has crept above the IOER.

The recent former Fed member Dudley has suggested that the Fed ditch the Fed-funds target, and instead target the IOER itself.  However, these are more operational issues and should not have much influence over market interest rates, yields and FX exchange rates.

Some risk of a softer ISM report

The ISM manufacturing report may weaken and undermine the USD somewhat.  Recent regional manufacturing surveys have weakened as a trend this year.  The Markit flash PMI was stable in April, but only after falling through Q1, running below the ISM index.  The global trend has been towards weaker manufacturing PMIs this year, and we might expect some feedback to softer US manufacturing.

To date, the ISM has generally held up better than regional surveys and PMIs abroad.  However, this does probably reflect a more robust US economy.  The US economy overall may continue to appear on a more stable path than key economies abroad.

US labour report may project strength

There is every reason to expect that the US payrolls report continues to show tightness in the labour market, posing an upside risk for the USD; especially if this results in higher wage growth.

The four-week average of jobless claims has returned to around multigenerational lows in recent weeks. The Conference Board’s Consumer Survey showed a fall in the balance between “jobs hard to get”  and “jobs plentiful” to return to its lows since 2000, after a blip up in March. 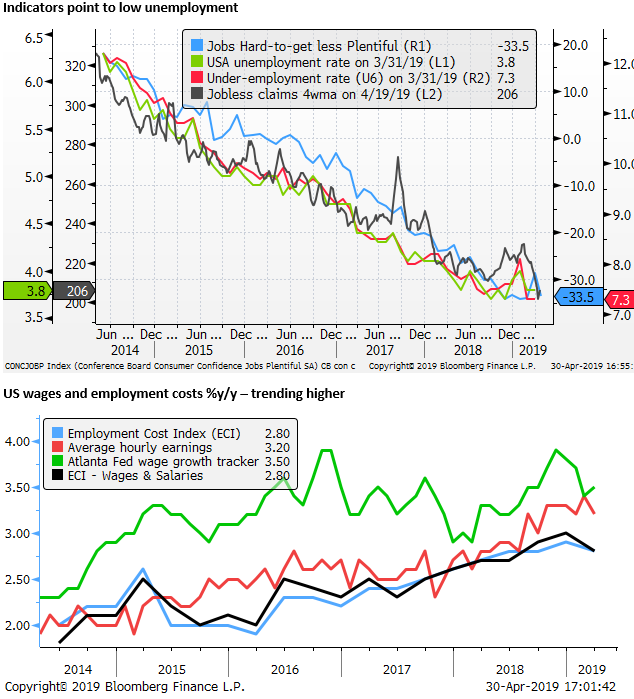 US inflation not as benign as it seems

While the recent US inflation data may appear to show declining inflation pressure, there is a clear divergence between the closely watched exclusion measures of core inflation and alternative statistical measures that extract outlier price movements. 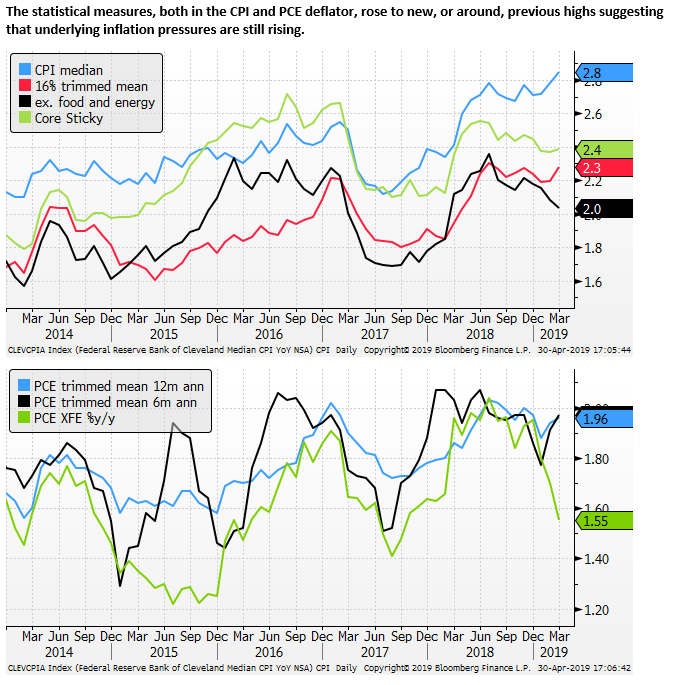 It is unlikely that the Fed will comment on this divergence since it has paid little to no attention to these alternative measures of underlying inflation at previous FOMC meetings.  But the data cautions against expecting the Fed to cut rates any time soon, and suggests there is a risk that the market is underestimating the risk that inflation rises above the Fed’s target over the coming year or so.

The University of Michigan survey of long-run inflation expectations fell in March to revisit its lows, and on a three-month moving average, it made a new low of 2.3%.

As such we see little chance that the FOMC will sound any concern over higher inflation risks in the near term. 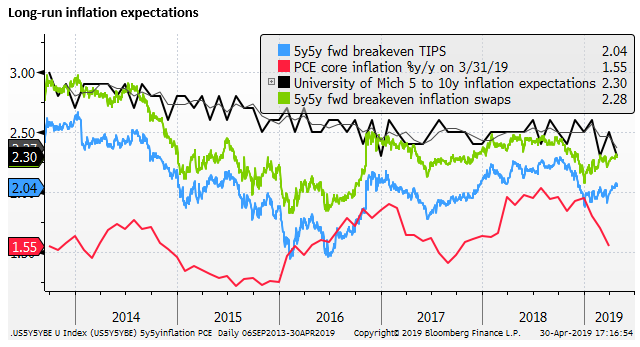