We have turned our attention to the EUR in recent days, watching it break a key support on Monday (falling through 1.1300).  Its performance has been undermined by surprisingly weak activity data, and uncertainty over the state of the Chinese economy and global trade growth.  However, the Eurozone had a run of bad luck in 2018; including the yellow vest protests, Italian political turmoil, auto sector disruption, weak close neighbour emerging markets, and a slump in export markets.  Heightened uncertainty over US-China trade relations, China economy fears, and Brexit has further dampened market sentiment. But on most fronts, the disruptions are diminishing and it is likely, in our view, that external demand will recover from its recent slump. We see upside potential for EUR in the coming months.

A number of key factors are expected to rapidly evolve over the coming week and months making for increased uncertainty.  These include the impact of fiscal and monetary stimulus in China, the progress in US-China trade talks (1-Mar initial deadline), Brexit negotiations (29-Mar deadline), a US government funding bill (15-Feb), and the possible rebound or otherwise in the Eurozone economy that has been hit by auto sector disruption, strikes in France and political driven market stress in Italy, and weaker global trade. 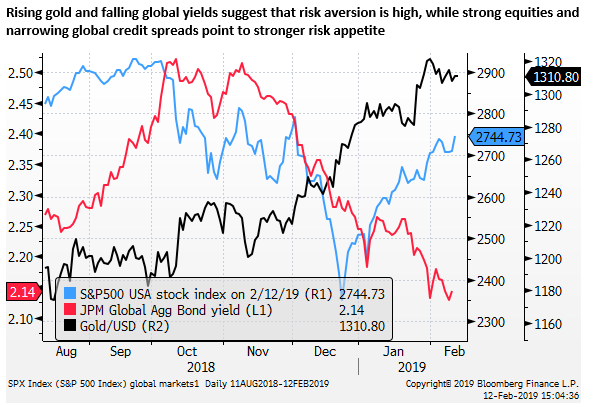 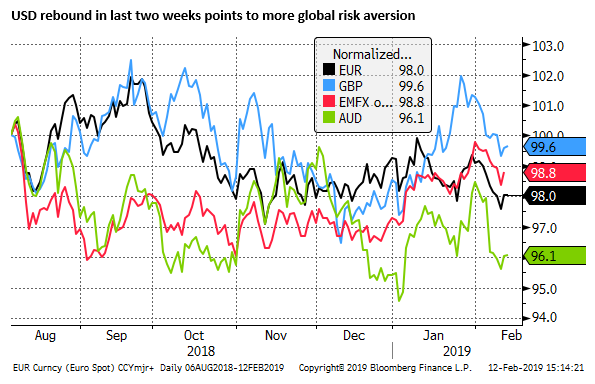 EUR and AUD barometers of economic and financial risks in China

Two important currencies for overall sentiment (EUR and AUD) have fallen more significantly than most, and are probably helping drag the USD up more broadly.  Both might be regarded as important barometers for the outlook for the Chinese economy and US-China trade talks.

The fall in the AUD may in part reflect a more rapid slowing in its domestic housing market and heightened fears that this is spilling over to household demand. It’s possible that this factor may overtake the influence of global factors in driving the currency.  However, we caution that Chinese equities have retained a rising trend this year and iron ore prices have surged; supportive factors for the AUD.

We suspect that the EUR may also be more highly influenced by Chinese economic and financial market conditions and the US-China trade talks.  Export growth in the Eurozone has fallen much more than expected, even more than might be related to weaker global trade growth, and this appears to reflect disruption to trade in China and its close trade partners in Asia. 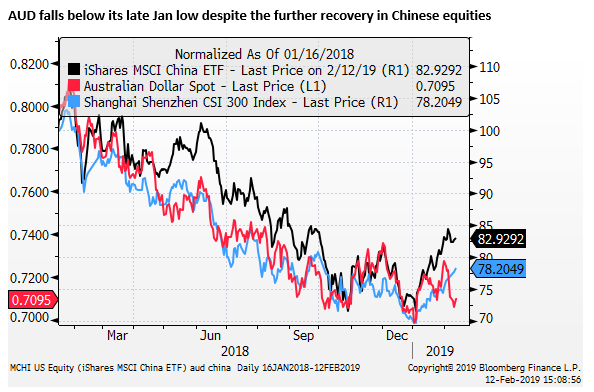 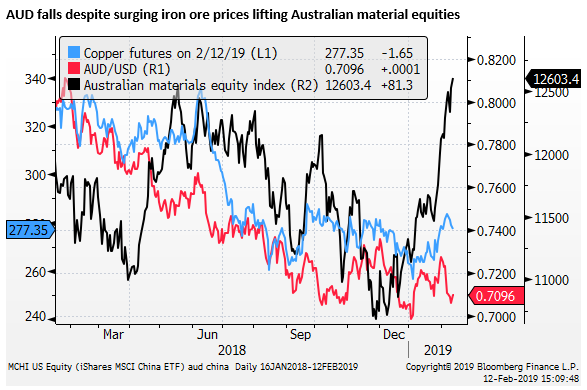 The deep and surprising slide in Eurozone economic activity appears to have significantly undermined sentiment for the EUR in recent weeks, in the environment of heightened uncertainty over the Chinese economy, US-China trade relations and weak global trade growth. 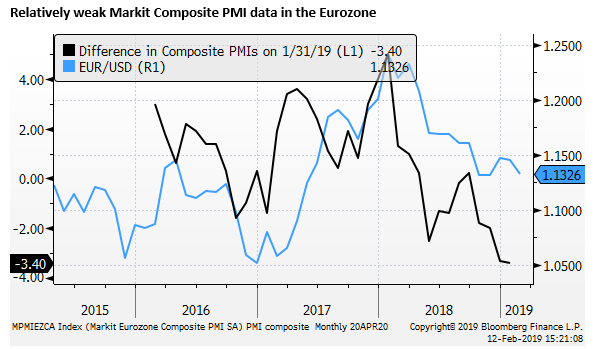 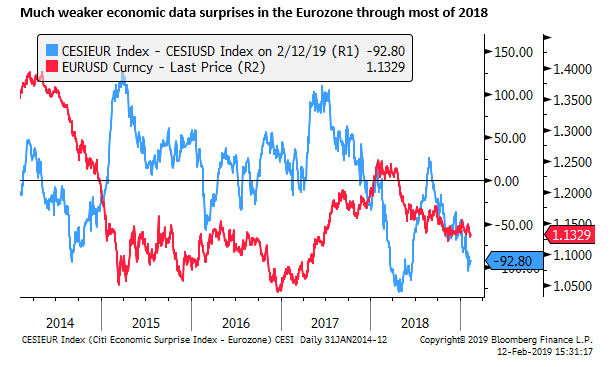 Eurozone economic activity has slowed more abruptly than expected with weaker export demand a key influence.  The European economy is more dependent on global trade volumes than other major economies, and it seems more influenced by disruptions to the global supply chain that might have resulted from the US-China trade dispute, and the slowdown in Chinese domestic demand.

However, in data released on Friday last week, German export value recovered to +1.3%y/y in December; rising 1.5%m/m seasonally adjusted; stronger than 0.4% expected.  Perhaps this was a sign of stabilisation in European export growth. 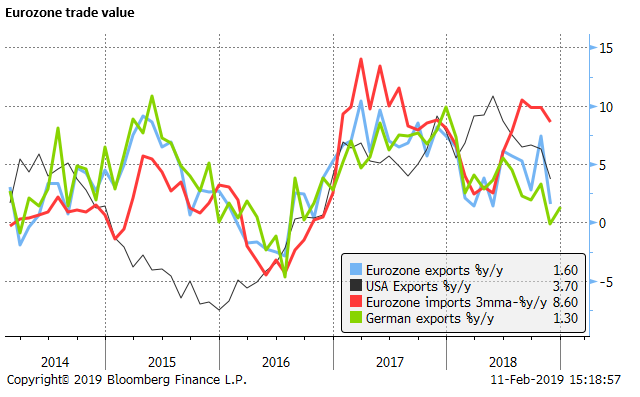 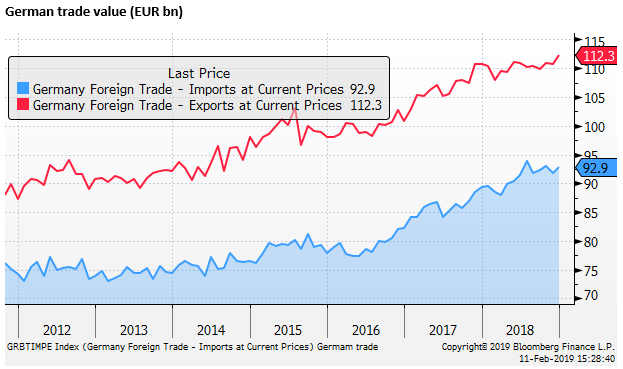 German imports rose 4.1%y/y in Dec, showing signs of regaining momentum over the last three months since September.  Overall Eurozone import growth has remained more robust than export growth; rising 5.0%y/y in November, shown in the chart above up 8.6% 3mth-yoy in November.  This suggests that domestic demand may be a source of stability for the Eurozone.

However, the PMI data point to weaker broad-based demand and activity through the first months of this year,  The Eurozone manufacturing PMI is close to stalling speed at 50.5 in Jan, a low in over five years, while the service sector PMI was somewhat stronger at 51.2 in Jan, unchanged from December.

Nevertheless, there are reasons to see the gloom in the Eurozone services PMIs as near its nadir.  Much of the weakness in the PMI data came from Italy (49.7) and France (47.8) where special factors may have unduly dampened activity and confidence in recent months, and might be expected to rebound relatively soon. 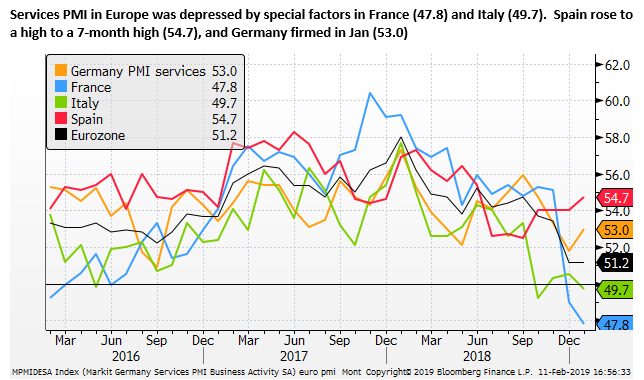 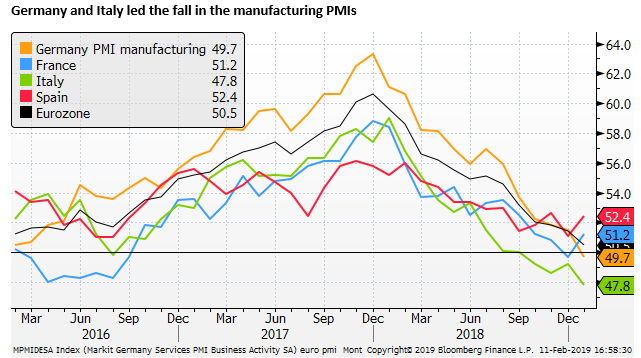 The Yellow Vest protests in France appear to have significantly weakened activity in the final months of last year and early this year.  They have forced the Macron government to reverse some policies to raise taxes and increased some social security payments, creating some increased net fiscal spending.  The Yellow Vest protests continue but are diminishing.  The peak of the disruption may have passed.

The weaker Italian economy may to a large extent reflect broader weakness in the Eurozone related to weaker export markets and the auto sector.  However, political uncertainty dampened activity throughout much of the year as Italy went through a long process of forming a coalition government with parties from the far left and right joining forces.  Negotiations over a budget and agreement with the EU were then prolonged and generated some Italian financial market turmoil. 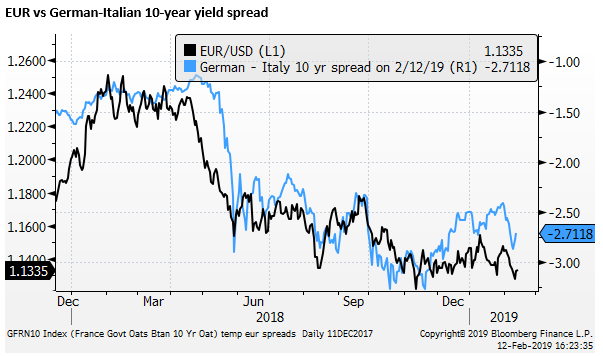 The EC was rather downbeat on the prospects for a recovery in Italy.  However, bond yields in Italy have eased from their peak, and the government is enacting increased fiscal spending that may support demand, even if it may not provide the incentive for stronger longer-term productivity growth.

As such, weak Italian economic growth in 2018 may relate to special factors that are diminishing, and give way to a better performance in 2019.

Auto and other disruptions to unwind

The auto sector that is significant, particularly in Germany, was hard hit in Q3, with lingering effects into Q4.  The EC forecast report said, “producers struggled to win certification under a new emission testing procedure (the Worldwide Light Vehicle Test Procedure), which became compulsory on 1 September. This led manufacturers to significantly reduce production in 2018-Q3.”

It is now more distant, but in the first half of the year, the EC report also notes that Eurozone economy was also affected by “unusual weather, strikes in some Member States, the timing of the Easter holiday and a wave of influenza related sick leaves.”

Disruptive events are a risk in any year, including the year ahead, but it does appear that the Eurozone had a run of bad luck in 2018, and factors that dampened growth have passed or are much diminished.  As such, the risk may be less tilted to the downside as many forecasters, including the EC may think.

The upheaval in emerging markets through Q2 and Q3, particularly in close neighbours like Turkey, may also have dampened export demand in the Eurozone.  This might be regarded as another of those special factors that less likely to undermine the Eurozone in 2019.

The biggest risk to the Eurozone economy is external demand.  It appears that this fell much more than expected in Q4 related to the slowdown in China and weaker trade volumes apparent among its close trade partners, Korea and Taiwan, possibly related to the imposition of US tariffs on most Chinese goods causing broader disruption to trade flows.

The EC European Economic forecast report released last week noted that, “Given the geographical orientation of external trade and its product specialisation, the euro area appears to be particularly impacted by the softening/deceleration of world trade growth.”

On this front uncertainty remains high.  The Chinese economy may be in the midst of a more sustained economic slowdown related to the fallout from tightening internal financial conditions as the country comes to terms with past excesses in its domestic financial markets and government efforts to control excessive and poor quality credit creation.

The US-China dispute over economic and trade policies may also have long-lasting impacts on business confidence in both China and the US and dampen global trade growth on a more prolonged basis.  This may continue to affect the Eurozone economy more than most other developed economies.

On the other hand, the US and China are negotiating a trade deal, and the Chinese authorities have implemented broad and targeted fiscal and monetary policy stimulus.

The disruption to global trade related to US-China trade relations is likely to ease, in our view, and demand in China may recover, at least moderately, from the weak phase through late last year.

It seems likely that the weaker export demand that has hit the European economy in recent months is moving through a low point, even if it may not fully recover and faces other longer-term restraints.

Other risks remain, including the possibility that US trade policy turns its attention to threatening tariffs on the European auto sector.  Something that was raised last year and has continued to simmer in the background.

However, the immediate focus is on resolving the US-China trade dispute, and it appears that the disruptive influence on global supply chains may already be playing out, and the worst phase for the European economy may be passed.  It is highly likely that the US and China come to some negotiated agreement that boosts global growth sentiment over the coming months.

European political risks, but no obvious path to hurt growth

European Parliamentary elections are scheduled for 23-26 May.  Bloomberg news reports that a study by the European Council on Foreign Relations expects that nationalist (typically right-winged) parties with anti-EU leanings are expected to gain a significant number of seats (perhaps a third of seats).  To the extent that they can work together, they may be able to have a significant influence on policymaking.

It is far from clear what common agenda right-winged nationalists might develop.  It may not extend to the extreme policy aimed at removing cooperation completely that might threaten the existence of the Euro, but they may disrupt efforts for greater unification of government policy and oversight.

Such an outcome might raise broader concerns over the drift in politics towards the right and anti-EU tendencies.  But there is not a clear path through which this may derail economic performance in the Eurozone in the short or medium term.

In fact, it might provide scope for weakening compliance to fiscal restraint and allow for more fiscal expansion in the short to medium term.  This may even provide scope for stronger economic growth and support the EUR.

The rise of populists in the EU may have implications for Brexit.  The shifting balance of power in the EU reflects the same forces that supported Brexit in the UK.  As such, the EU parliament may have more sympathies towards Brexiteers after the May elections.

Again, it is hard to see this significantly shifting EU policy on Brexit, but it’s possible that some UK MPs see an opportunity to achieve more concessions on trade relations and the sticky Irish border issue after the May European parliamentary election.  This could be seen as a reason to push out the Brexit date.

Brexit delay and uncertainty is dampening economic activity in the UK, and there may be some negative feedback to the European economy, particularly for export markets in the UK.  But on the other hand, more companies appear to be shifting operations to the mainland EU as Brexit uncertainty forces their hand to act sooner rather than later.  This should be providing support for the Eurozone.

The EUR to some extent may be drawn into the Brexit political drama and follow to the swings in the GBP.  The May European Parliament elections may appear to accentuate the risks to the EU economy, but there is no obvious path through which these elections or Brexit are likely to cause major Eurozone economic disruption.

Should the UK parliament develop a clear policy path towards Brexit around the 29 March deadline, this might support the GBP, with positive feedback for the EUR.