AUD/NZD is still languishing around record lows.  Pessimism over the AUD increased as the Australian economy stalled in the second half of last year, the Royal Commission into the financial sector unsettled confidence, the housing market downturn accelerated, political uncertainty peaked into the national election in May, and the RBA scurried to cut rates twice at back-to-back monthly meetings in June and July.  Now the regulatory, political and economic trends are moving in favour of the AUD and against NZD.  RBNZ is toughing capital requirements on NZ banks. The Australian housing market is stabilising, NZ’s is slowing.  The Australian political cycle is as positive as it has been for a decade, and tax cuts have been delivered.  Australian trade performance is much stronger, and its fiscal position has caught up to and over-taken NZ’s.  NZ is expected to cut rates in August and is largely pacing Australian rates lower.

Australia has gone through a reckoning of its banking and financial services industry through the Royal Commission last year and is coming out the other side of a period of significant tightening in credit conditions.    New Zealand, on the other hand, is now engaging a review of capital adequacy in its banking system and is heading into a period of a tightening in its credit conditions.

The RBNZ’s latest consultation paper “How Much is Enough Capital?” has been met with some consternation by the banking sector.  The RBNZ proposed setting a minimum regulatory capital requirement of 16% for Tier 1 Capital (6% minimum plus a 10% prudential capital buffer). Banks think this is onerous and will affect their capacity and willingness to lend.

Reserve Bank plan ‘has significant negative consequences for our country: banks; 20 May – Stuff.co.nz

The RBNZ’s final decision on the capital requirements and regulatory framework is scheduled to be published in November this year, implemented in April, with a proposed transition period for banks to raise capital of 5 years

Credit conditions had tightened during the Royal Commission in Australia and contributed to a weaker housing market and slower overall economic growth in the last year.

However, in the last week, the regulator APRA has removed the mortgage interest rate floor (7%) banks were required to use to assess borrowers’ capacity to repay their loans, leaving only a 2.5% buffer over the prevailing mortgage rate for assessing the serviceability of loans.

After the recent RBA rate cuts, standard mortgage rates are around the 3.5% level, pushing the serviceability test to around a 6% rate, and often lower for many borrowers, increasing the amount banks will lend for house purchases.   UBS estimates published in the AFR suggest that the changes would increase maximum loan sizes by around 13.8%, providing new ammunition for buyers to bid up house prices.

The Australian housing market appears to be stabilising after falling for around 21 months, reaching a peak rate of decline in the first quarter this year.  The CoreLogic national capital city daily index is down around 10.5% from its peak in October 2017.  It has not clearly bottomed yet. 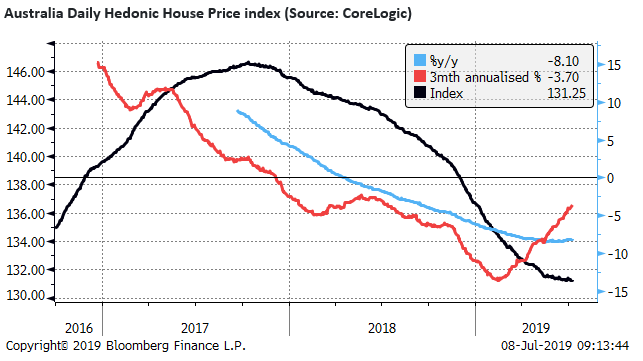 The auction clearance rate has recovered to 66.5%; its highest level since Apr-2018, consistent with past periods of moderate price appreciation. 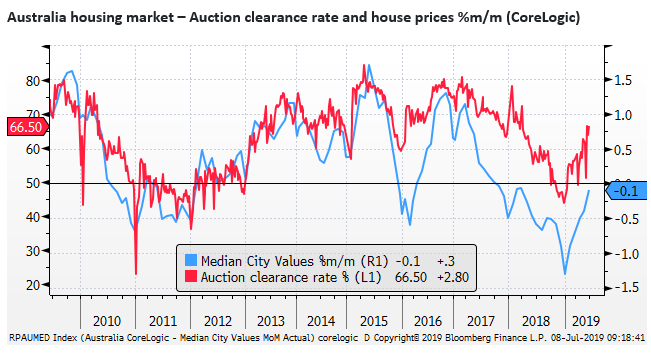 The housing market was under severe downward pressure early in the year partly on fears that the national election held in May would deliver a change of government to the Labor Party that had a policy of removing tax breaks on property investment.

This risk did not materialise. Furthermore, the returned LNC government went into the election in May with a policy to provide concessional loans to first home buyers with a government guarantee to allow them to qualify for a bank mortgage and purchase their first home. The scheme is expected to begin next year.

A rapid rebound in the property market is unlikely with excess supply still hanging over some parts of the market, slower population growth and less foreign demand than past cycles, and a tightening in credit availability over the last two years that is likely to remain in place, even if it has eased recently.  However, a range of factors have improved, and buyers waiting for evidence that the market is stabilising are likely to return to the market and provide more balance.

Overall, the New Zealand housing market has been more stable than Australia over recent years, prices rising at a modest overall rate.  However, price appreciation in the QV house price index has softened to a 2.0% annual rate in June, a low since 2011.  The volume of sales retreated 8%y/y in May. 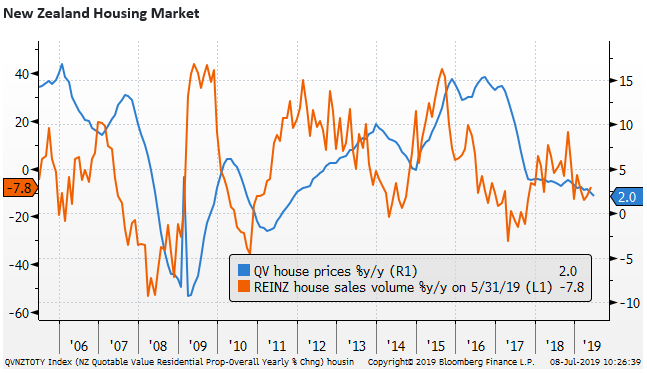 The RBNZ noted in its May Statement on Monetary Policy that slower population growth since 2016 was slowing the housing market and household spending.

After a prolonged period of political instability in Australia with infighting in the major parties in power, and the constant risk of a change of leader and/or change in government, the surprise victory by Scott Morrison as leader of the LNC appears set to herald a new phase of stability.  Furthermore, the balance of power in the Senate appears to offer an easier path for the LNC’s legislation through parliament.

The LNC was able to pass its tax cut policy that it took to the May election in the Senate without the support of the main opposition Labor Party or third largest Green Party, with the support of four out of six crossbench members.

The success in moving quickly forward with its tax plan, the strong position Morrisson now holds within his LNC, and the Conservative policy agenda should help boost business confidence in Australia.

The tax package has three stages, including a tax refund for lower and middle-income households in coming months after they lodge their tax returns for the year ended June.

Further tax cuts come in 2022/23 and 2024/25 when the government phases in changes in the tax structure that address bracket creep and flatten and simplify the brackets.  These later tax changes will benefit more middle to higher income earners.

In the pockets of lower income earners, the fiscal boost has more chance of being spent rather than saved, adding a modest boost to GDP in the second half of the year.

The government does not appear in a mind to consider more spending on infrastructure and retains a focus on keeping the federal budget in modest surpluses.

However, the RBA Governor, viewing limited scope and effectiveness of further monetary policy easing, is calling on the government to utilise record-low borrowing costs and further ramp up infrastructure spending.

Given the government is in a relatively strong fiscal position, it is possible that it will consider more fiscal stimulus at least ensure it is continuing a solid program of support for infrastructure spending.

Private sector investment has been weaker than expected in recent quarters, and the outlook is mixed.  Mining sector investment appears to be around a trough and may start to add modestly to business investment in the year ahead, supported by high iron ore prices in particular.  Dwelling investment, on the other hand, appears set for an extended decline after peaking in Q3 last year.  Non-mining business investment, now the largest share of private investment, has been supported (crowded-in) to some extent by government infrastructure investment and will be an important swing factor for the economic outlook.

Business sentiment has been depressed recently reflecting global trends, but we might expect some improvement in business sentiment from the improved political backdrop in the second half of the year 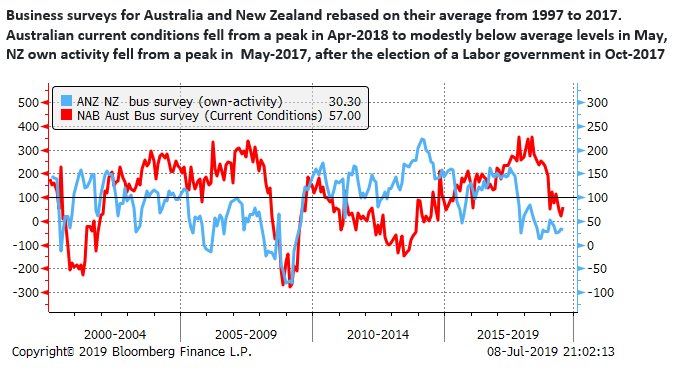 Australia and New Zealand both have relatively strong fiscal positions, projecting small surpluses in the coming year. New Zealand returned to surplus sooner than Australia in 2014, but Australia has caught up in recent years, supported by stronger commodity prices.  New Zealand’s surplus narrowed after the change in Government in 2017 resulted in some increased spending on programs to support families and affordable housing. 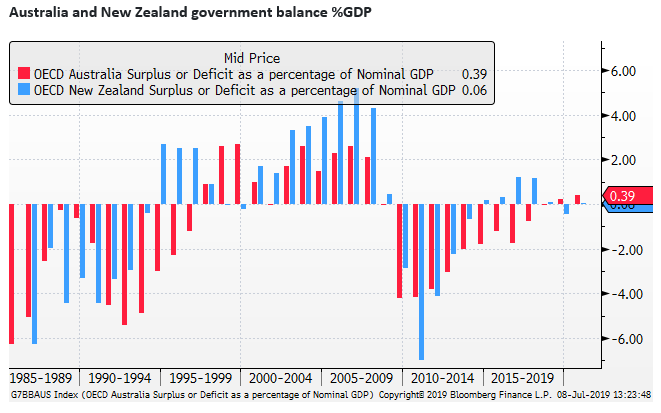 One of the clearest shifts in favour of the AUD over NZD has been relatively high commodity prices, and much stronger net exports and current account balance over the last year. 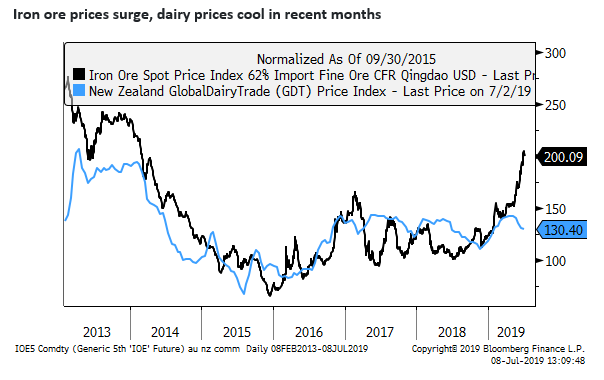 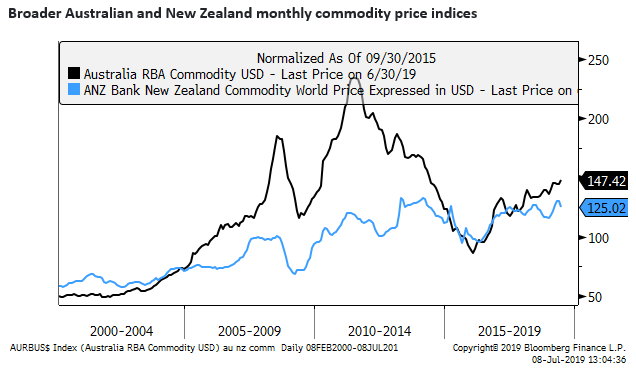 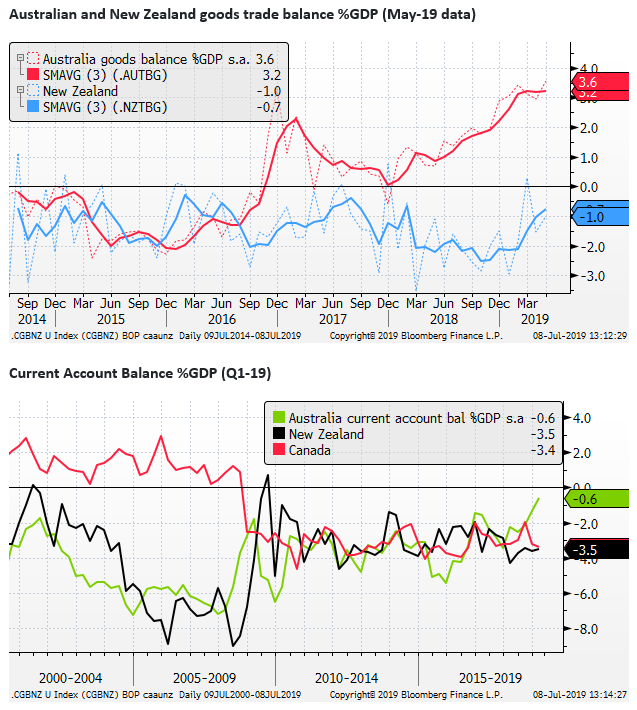 The RBNZ has been a bit more proactive shifting to an easing bias and executing a rate cut somewhat surprisingly in May (taking rates from 1.75% to 1.5%).  The RBA then played catch-up and over-took with back-to-back rate cuts in June and July (taking rates from 1.5 to 1.0%).  However, the RBNZ is widely expected to cut rates again on 7- August (85% priced to lower rates to 1.25%).  Both are expected to cut rates further still, although the market expects them to wait and watch for a time.

AUD/NZD is around historical lows since around 2014, trading in a sideways pattern, spending most of its time between 1.05 to 1.10, recently nearer the lower side of that range.

As the chart below suggests, the relative rates outlook does not account for the record lows.  AUD has typically had lower rates than NZD, with the main exception being during the mining investment boom in Australia between 2009 and 2013.

The rates spread between 2005 to 2015 appeared to be the key determinant variable for the AUD/NZD.  However, over the last five years, the rate spread has appeared to provide little direction for the cross, although AUD 2yr rates have fallen more than in New Zealand so far this year, and may be weighing on the AUD/NZD.

Relative commodity price indices have provided some guidance on AUD/NZD, and remained more consistent with the cross over the last five years than the interest rate spread.  As discussed earlier, recent commodity price trends and trade results should support a higher AUD/NZD exchange rate 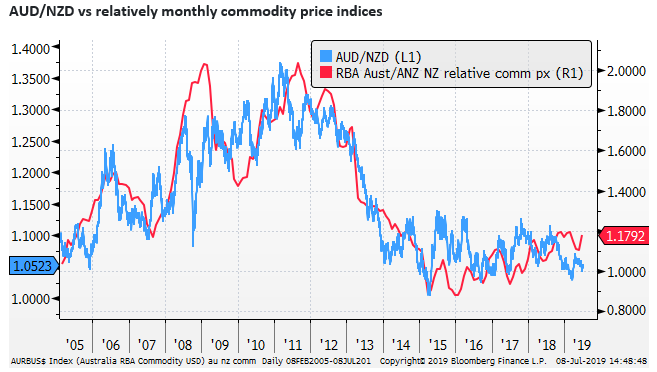 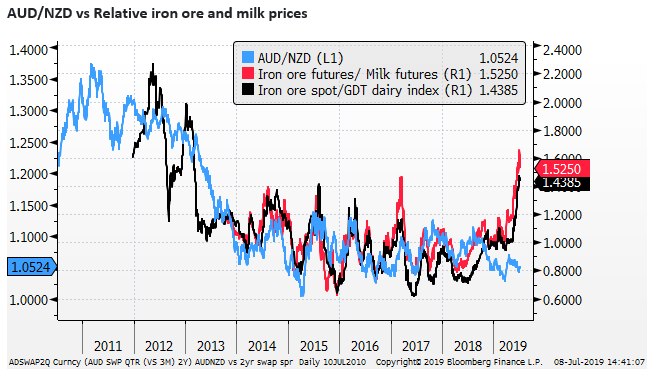 In seeking a reason why the AUD maybe struggling compared to NZD, perhaps the market views AUD as a proxy for confidence in the Chinese economy and financial stability.  Even though iron ore prices are much stronger in the last year, the market is less confident on the Chinese economic outlook. 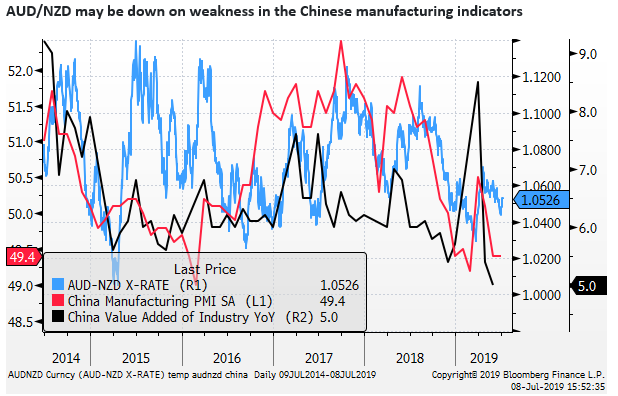