Chinese market sentiment at a crossroad

Chinese equities face a crossroad to start the year as the market mulls a more serious phase in the structural decline in China’s economy balanced against renewed efforts to stimulate growth in 2019.  The US-China trade dispute and broader US policy shift to contain China’s economic ambitions in high tech industries have contributed to fears of a Chinese led global economic downturn.  But these concerns may ease as China and the US progress through trade negotiations restarted amidst a truce on tariff policy through 1-March.  The AUD and copper prices have been highly correlated with Chinese equities over the last year, highlighting the broader market implications of trade talks this week and renewed Chinese efforts to restore economic confidence.

It seems more commentators are mulling whether we are in the midst of the big China slowdown; the major reset needed after years of excessive credit growth, overcapacity, a middle-income trap, and facing more international competition and regulatory push-back in global markets, including tougher US trade policy.

There are reports that business and consumer confidence in China have slumped to levels not seen in previous slowdowns over the last decade or more.  Private business is feeling the credit tightening more severely.  The crackdown on shadow finance, including troubles that have emerged in peer-to-peer lending and share-pledge financing, has had a significant and long-lasting dampening impact on private enterprises that are not likely to be easily reversed by government measures to encourage more bank lending to this sector.

There are concerns that state-owned enterprises remain bloated and inefficient and retain preferential access to bank credit. And the government efforts to contain shadow finance are disproportionally dampening the more dynamic private sector that has the best chance to drive future economic growth.

The weak Chinese December manufacturing PMI readings alarmed financial markets, suggesting that the economic slowdown this year deteriorated into the year-end.  Partly as a result of US trade policy uncertainty, the market fears that China has entered a more sustained slump or at least a tepid growth phase that it will struggle to pull out of in the coming year. 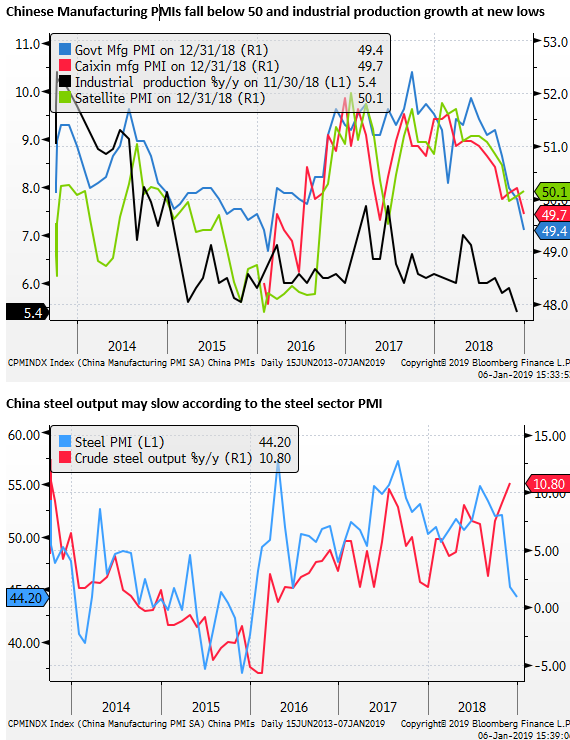 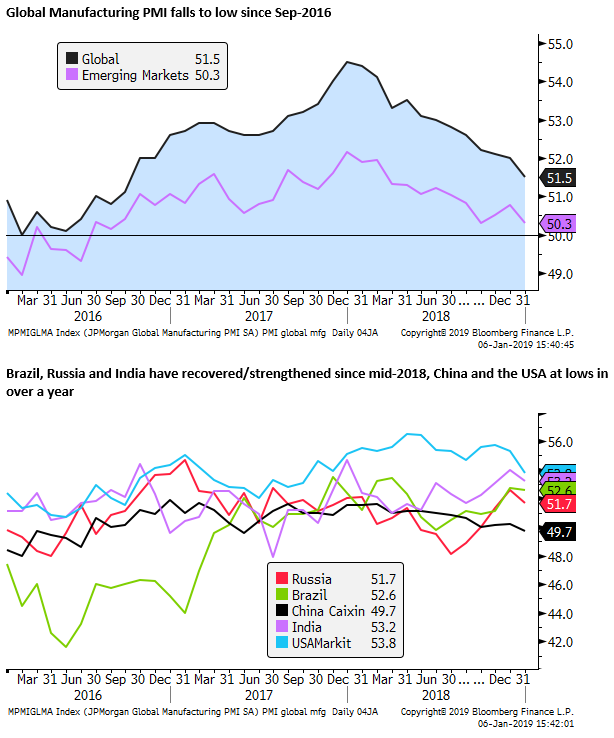 The Chinese equity market has probably contributed to the concern over the underlying strength in the Chinese economy.  It has significantly underperformed other major and developed markets in the last year. 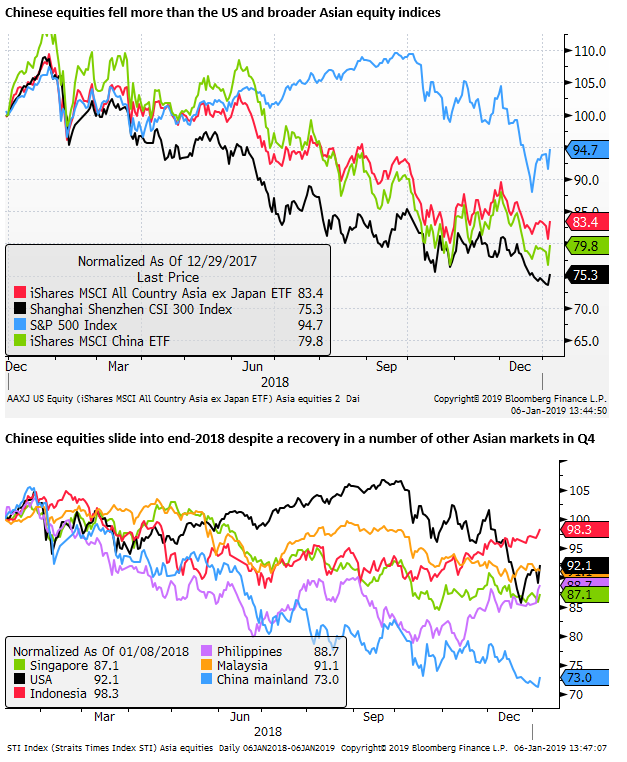 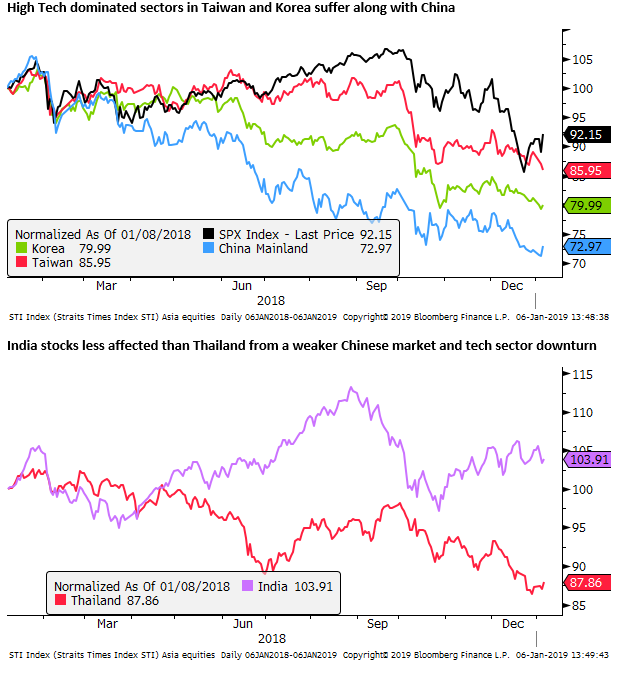 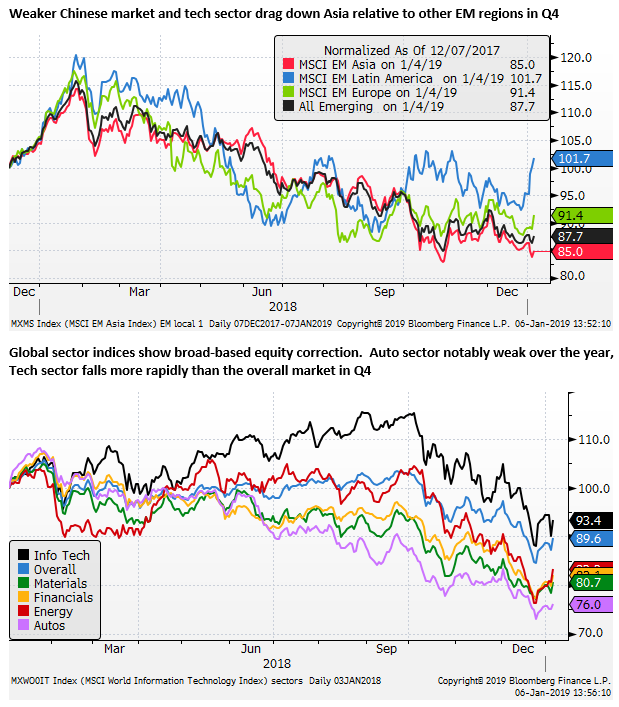 However, China announced a number of fiscal, monetary, and regulatory measures over recent months designed to shore up its equity market and consumer and business confidence.  It is also showing an increased desire to reduce trade tensions with the US.  This is likely to leave the market in two minds over whether to expect a recovery in Chinese asset markets and related global proxies, like commodities and the AUD.

The consensus developing on the street is that the economy may remain soft in Q1 this year, but it may start to show some rebound in Q2 or the second half of the year in response to the government stimulus measures.  Optimism may be further boosted if the US and China trade talks show meaningful progress.

The US has sent a delegation to China this week.  The market will be watching to see what statements are released in response to these talks. Trump and Xi met on 1 Dec and agreed to a 3mth truce on additional tariffs to negotiate a trade deal (to 1-March).

This timeline shows how the US-China trade war led to the latest round of talks in Beijing; 4-Jan – CNBC.com

However, the market is likely to remain sceptical that China can engineer a sustained economic recovery in 2019 or beyond.  The authorities have tried to tweak policy on a number of occasions through 2018 and have not arrested the steady slide.  The market is questioning the capacity of the government to act more forcefully and worries that structural economic and financial problems are coming home to roost. These doubts may prevent a significant or sustained rebound in Chinese equities (and proxies like the AUD and copper). 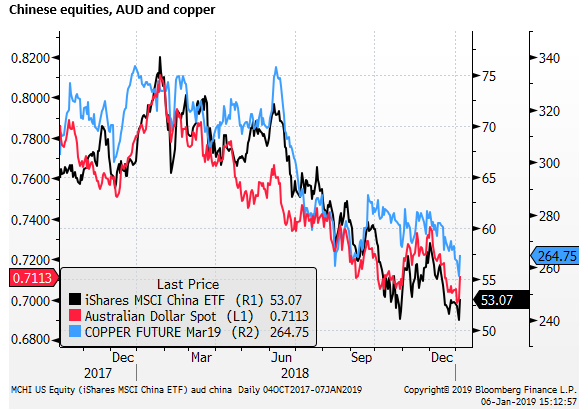