The multipronged stimulus policy announcement in China appears significant and should help Chinese investor and economic confidence recover.  The market is probably braced for weaker Chinese December activity reports next week and should look forward with some increased confidence in Chinese equities.  This is likely to contribute to a firmer outlook for the EUR that has suffered from a slump in its industrial activity that appears to reflect weaker demand from China.  The AUD has been highly correlated with Chinese equities in the last year, and it may also respond positively to prospects for some recovery in China.  However, its upside may be hampered by the increasing concern over more rapidly falling house prices in Australia, weaker construction activity and fears that households may have slowed spending.  RBA rate cut expectations have increased and Australian rates have lagged the recent rebound in US rates.

The multi-pronged stimulus policy announcement by senior Chinese government officials on Tuesday should bolster confidence in the Chinese economy.  The market has probably braced for more evidence of a significant slowing in the Chinese activity data due next week.  And it should at least start to see a case for growth stabilising and possibly improving over the coming year in response to these stimulus measures.

The press conference was held by:

There were a number of stimulus measures announced including tax cuts, rebates, and investment incentives for small private companies. They also announced plans to cut income tax but were less specific.

Xu said that the tax cuts were “larger scale” and “focused on reducing the burden of manufacturing and small and micro enterprises”.  He said that the scale of the tax reduction for the whole year would be about 1.3 tn Yuan (about 1.4% of Chinese GDP).

Furthermore, he said, “the scale of local government special bonds will be greatly expanded, and the construction of major projects under construction will be supported.”

Zhu said the central bank would launch tools to support financing for micro-enterprises.

There remains significant scepticism that these measures will turn around the Chinese economy.  China did implement tax cuts early last year and steadily eased monetary policy through 2018, and yet the economy continued to slow, slipping significantly towards the end of the year.

It appears that tighter regulatory pressure resulted in a decline in shadow bank finance and had a significant dampening impact on small and medium-sized private companies.  US trade policy has been an additional drag on economic confidence.

However, the stimulus measures appear significant in scale, are broad-based, and also more highly targeted on the smaller private companies that appear to have been a major drag on the economy in the last year.  As such, we expect them to help stabilise economic and investor confidence in China. 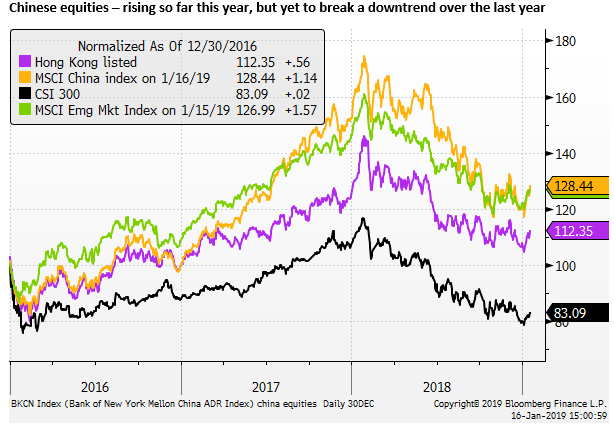 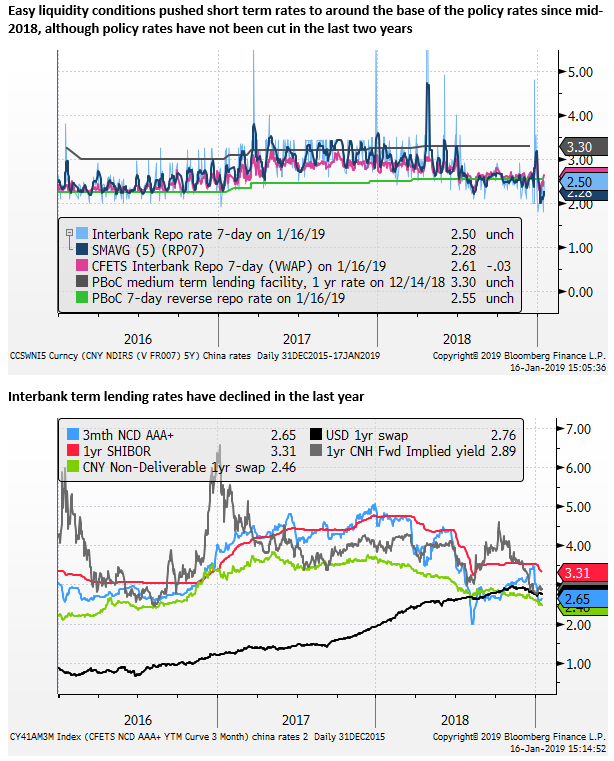 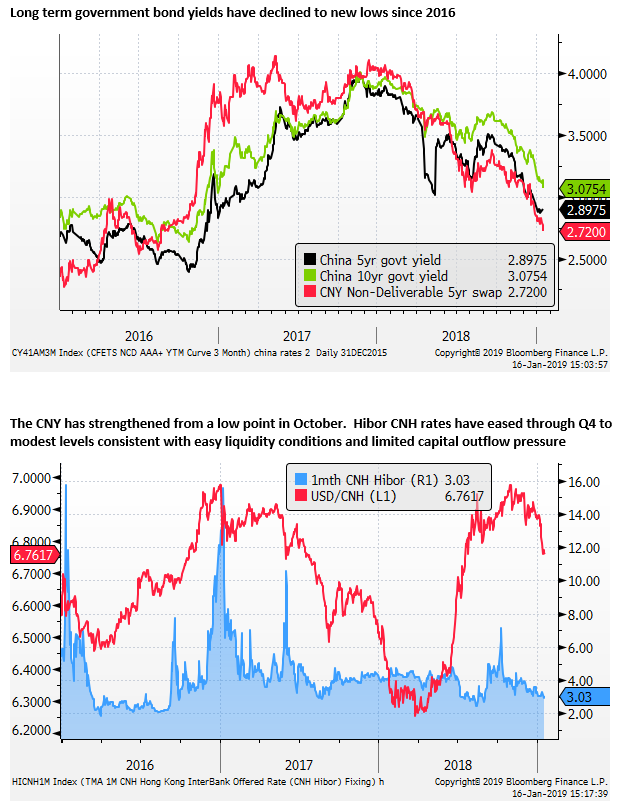 Chinese stimulus measures should tend to support global investor confidence; this includes for more export-driven economies that rely on global, and in particular Chinese, demand. The EUR appears to have suffered recently from a stalling in Eurozone export growth and the recent decline in industrial production.  The prospect of stronger demand from China should help support the EUR.

AUD has been a close proxy for China

The AUD has proven to be highly correlated with Chinese equities in the last year, acting as a proxy for economic and financial confidence in China.  The recent recovery in the AUD has matched the rebound in Chinese equities. 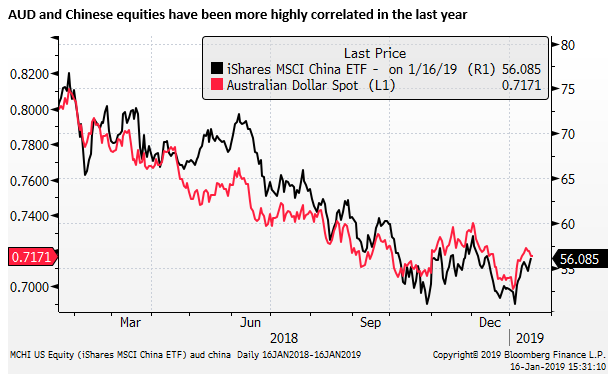 While copper and aluminium prices trended lower in 2018, consistent with weaker global industrial demand, Iron ore prices in China have been more stable, recovering from a recent low in November.  Firmer iron ore prices also help support the AUD and may reflect some recovery in fixed asset investment in China late last year and expectations that stimulus measures will support demand for steel in the year ahead. 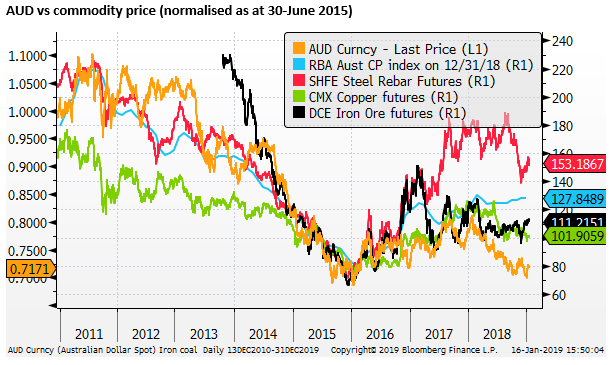 Diminishing Confidence in the Australian economy

With the AUD more closely aligned with Chinese equities in the last year, it is not clear if domestic economic and financial conditions (in Australia) have had a significant impact on the AUD.  However, confidence in the Australian economy has diminished since the release of weaker than expected Q3 GDP growth; including weaker household consumption growth.

The accelerating decline in house prices in the last year has contributed to fear that household consumption may slow further over the coming year.  Along with a peaking in construction activity, this may pull the economy to below trend growth; pressuring the RBA to consider rate cuts.

Reports on retail foot traffic and mixed results reported by a number of retailers in late December are contributing to concerns that household consumption may be slowing; although data in November were a bit stronger than expected (still only up 2.8%y/y). 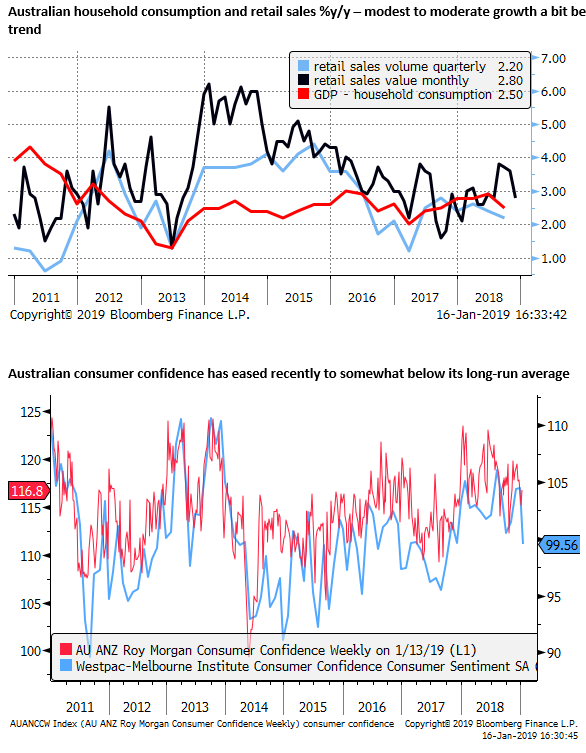 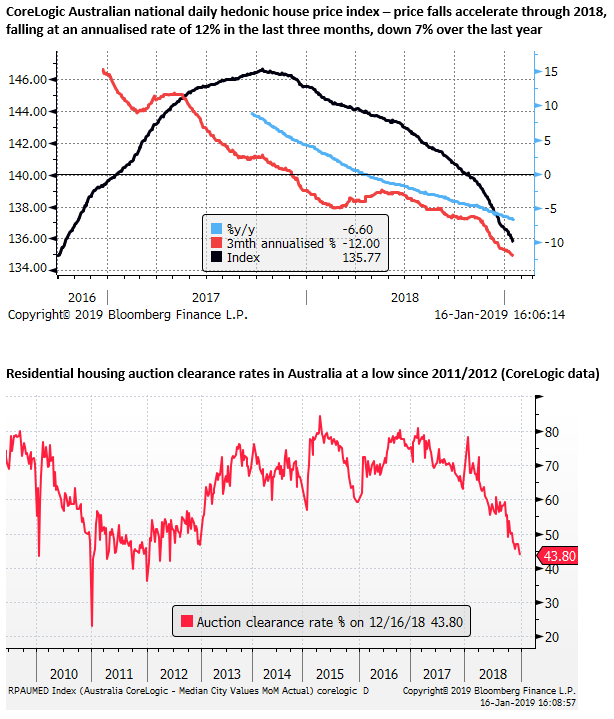 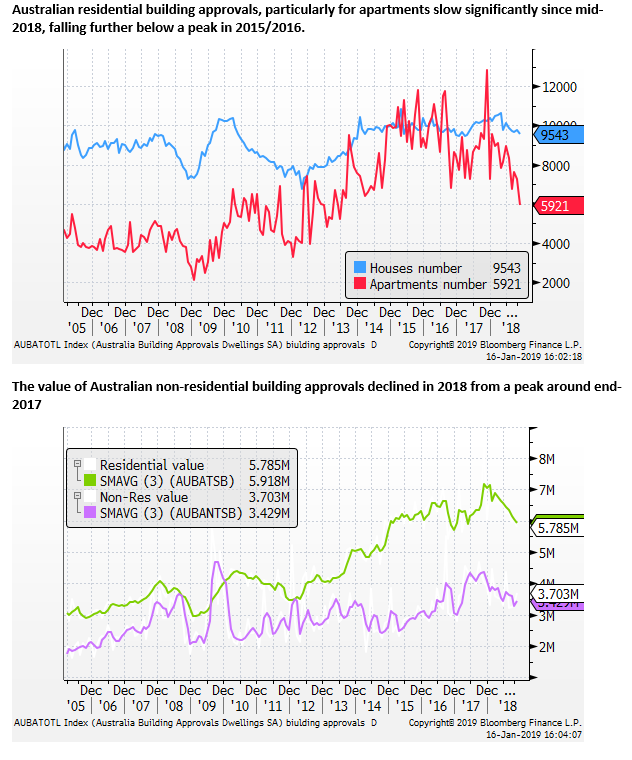 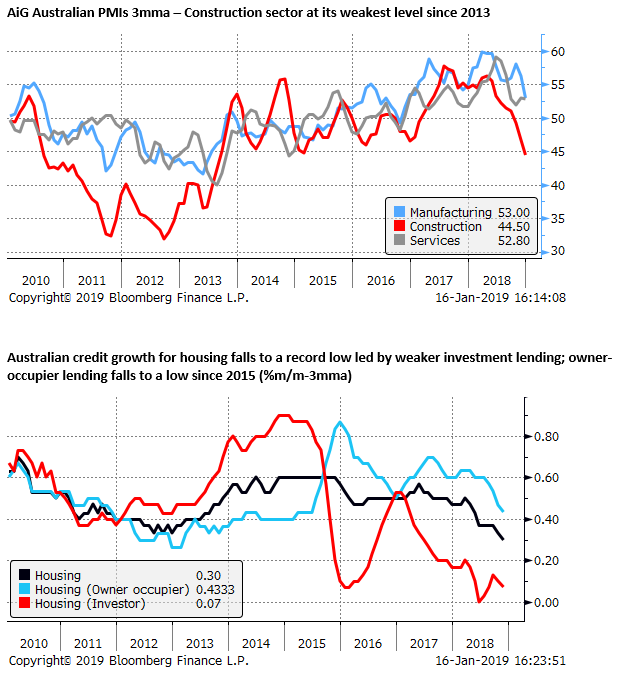 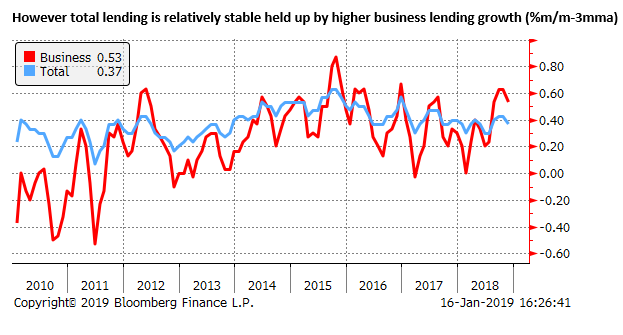 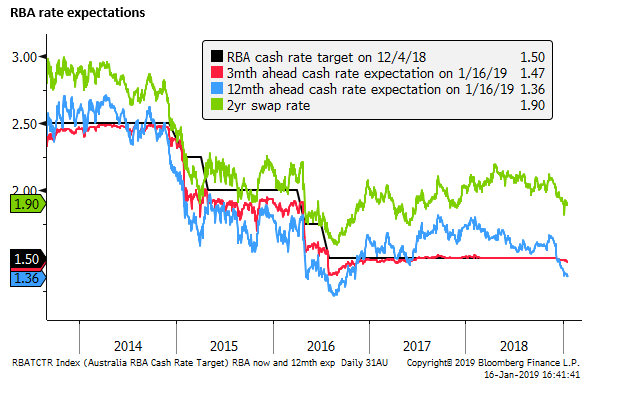 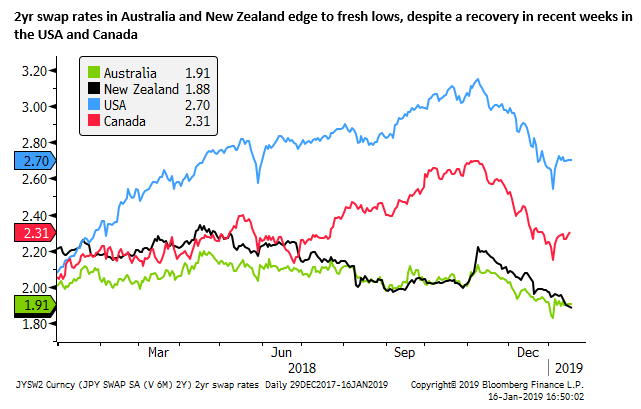 A factor contributing to expectations that the RBA may cut rates again is a renewed rise in bank funding costs over and above the RBA cash rate.  3mth bank bill rates have risen by around 12bp since November, and the AUD/USD cross-currency swap basis has also risen somewhat.

This has reversed the modest easing in funding pressure from the peak around mid-2018.  Three-month bank bill rate spreads over cash rates are around 35bp higher since 2017.  Futures pricing suggests that the market expects little easing in spreads over the coming year.

The spread widening has resulted in some increase in mortgage lending rates over the last year, although this has been modest in aggregate and has not provided a compelling case for the RBA to hike rates.  Nevertheless, banks have tightened lending standards over the last year in response to Hayne Royal Commission. 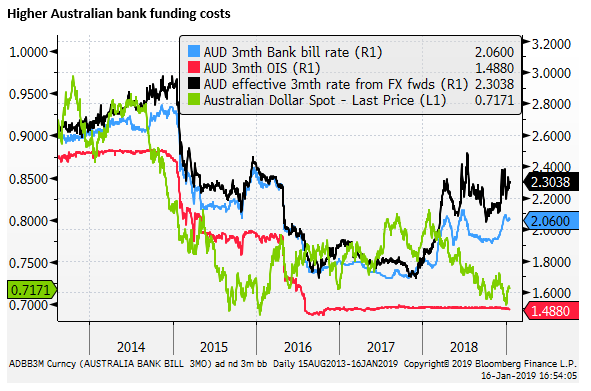 The shift down in Australian rate expectations to some extent reflects lower US rate hike expectations in Q4.  It does not appear that rate spreads have been a key factor in the decline in the AUD in the last year.  Its fall appears to have been more correlated with broader strength in the USD and weaker Chinese equity markets.

The outlook for Chinese and global equities has improved with broad policy stimulus in China, a less hawkish Fed that appears to have entered an extended pause in rates, and hopes for improved US-China trade relations as talks continue with a target date of 1-March for a trade agreement.  This has contributed to rebound in the AUD so far this year, and it may see further gains in the AUD.

However, domestic Australian conditions may be deteriorating with increased concern centred around an accelerating decline in the housing market.  This may weigh on Australian interest rates and yields and tend to cap the AUD exchange rate.