The New Zealand employment data released on Tuesday moved the needle in favour of a strong AUD/NZD.  Perhaps more significant is evidence that construction and the housing market in New Zealand appear to be peaking, while in Australia construction appears to be picking up, led by stronger non-residential building consents.  A lift in the non-residential building sector in Australia gels with broader evidence of rising business confidence surveys.  Housing market activity and prices are also more clearly slowing in New Zealand in response to its macroprudential measures, while the Australian housing market remains resilient in the face of its mild macroprudential measures.  Residential building approvals in Australia stabilised with gains in house approvals in recent months.  The AUD/NZD may also be supported by broad-based gains in industrial commodity prices, consistent with a stable and more solid global economic recovery.  The market appears to be under-estimating the potential for political and economic uncertainty related to the New Zealand national election set for 23 September.

New Zealand employment growth disappointed expectations with a fall in jobs of 0.2%q/q in Q2, against a forecast rise of 0.7%.  Annual growth slowed from a very strong 5.7%y/y to a still strong 3.1%y/y.

Nevertheless, hours worked still slowed from 6.6%y/y to 2.6%y/y in Q2, as the pace of employment growth cools from a supercharged 2015.

Surging immigration and participation rates have helped prevent the labour market from tightening.  However, in Q2, participation dipped from a record high (in 30 years of data) from 70.6 to 70.0.  As such, the unemployment rate fell as expected from 4.9% to 4.8%, a low since Q4-2008.

The RBNZ does not view capacity in the economy through the lens of the unemployment rate, preferring to express this in terms of an overall economy output gap, which is viewed as close to zero or neutral (but with a wide estimation error).    Unemployment fell much further in 2007, to 3.3%, but this was in an inflationary environment and appeared too tight.  The RBA Governor Wheeler in Q&A during a press conference early this year suggested 4.5% was perhaps a neutral rate of unemployment. 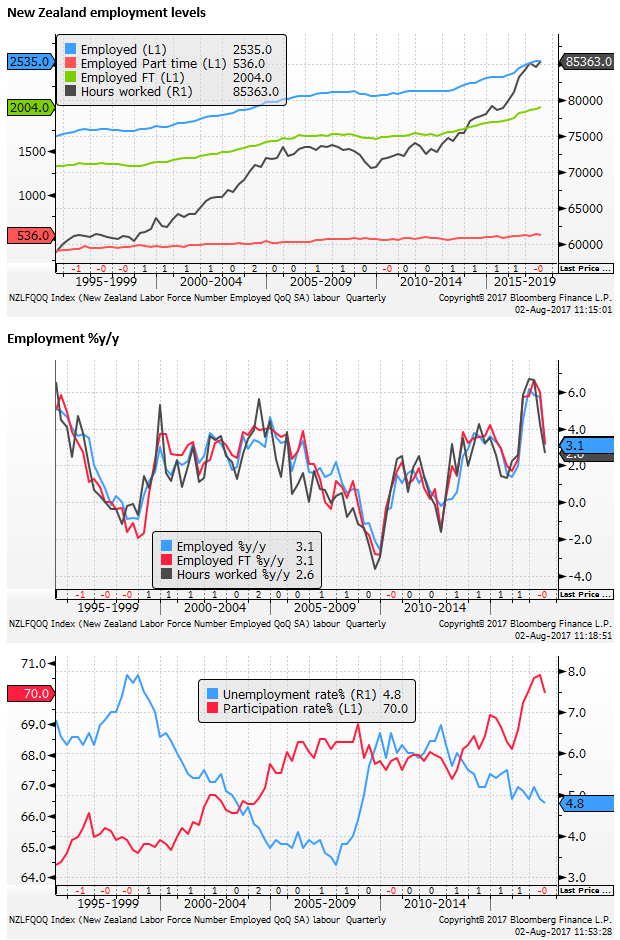 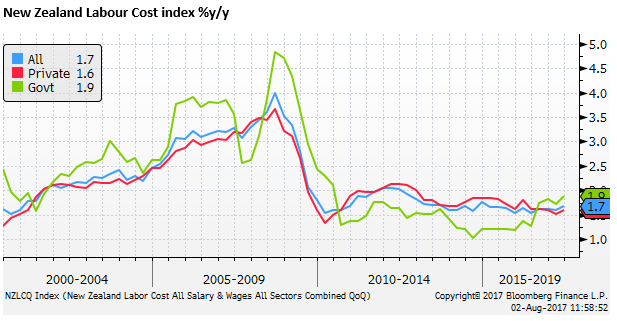 The data probably don’t add too much to the outlook for monetary policy in New Zealand. There was some tightening in the labour market, but the pace of jobs growth has slowed, albeit still quite strong from year-ago levels.  Wage growth yet to break out of its doldrums.

Construction activity has been a strong driver of the NZ economy since the 2011 Canterbury earthquake, but is showing signs of peaking.  Building consents appear to have peaked in 2016. 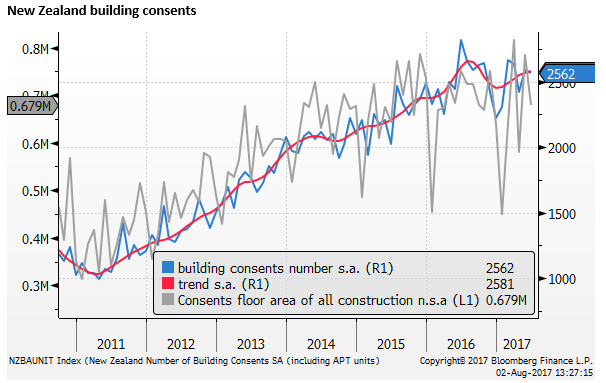 The construction components of the ANZ business survey fell sharply in July.  Some of this fall is a seasonal winter lull, but they were the lowest since 2015. 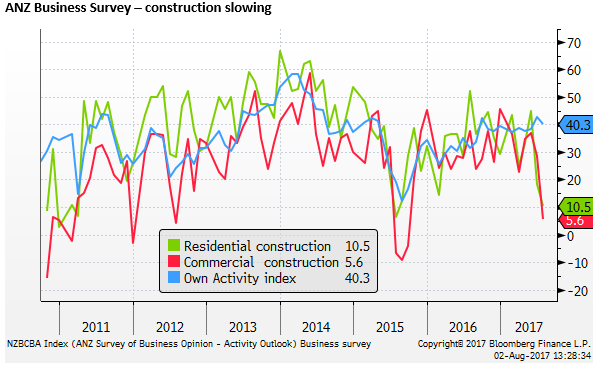 It may be related to RBNZ macro-prudential measures, but the housing market has slowed significantly this year.  House sales are down 25%y/y and house price growth has slowed to around 6%y/y, down from 13.5%y/y in January. 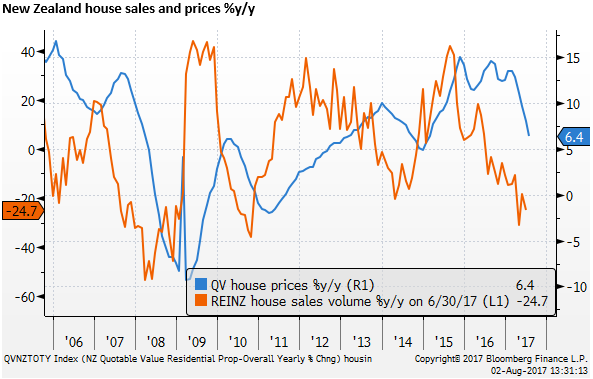 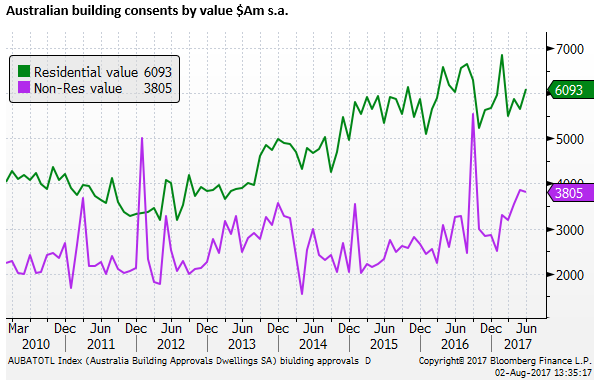 The Australian residential building sector may have peaked in 2015/2016, as apartment approvals have fallen from their peak in July.  However, the most recent approval trend has picked up in the last month, due to stronger house approvals. 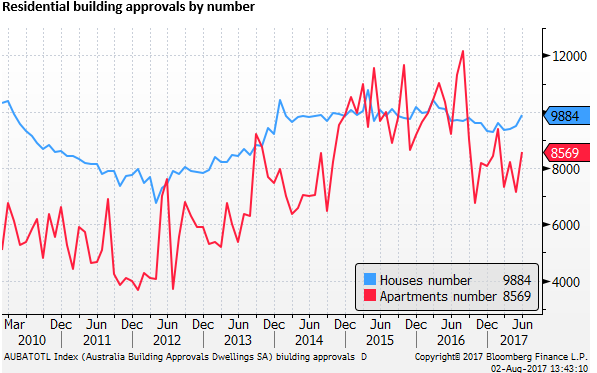 The Australian Industry Group PMI for the construction sector also appears more buoyant, at 54.9 3mma in June, a high since October 2014 (a July figure is due on 7 Aug).  This contrasts with the weaker construction components in the ANZ New Zealand business survey shown above. 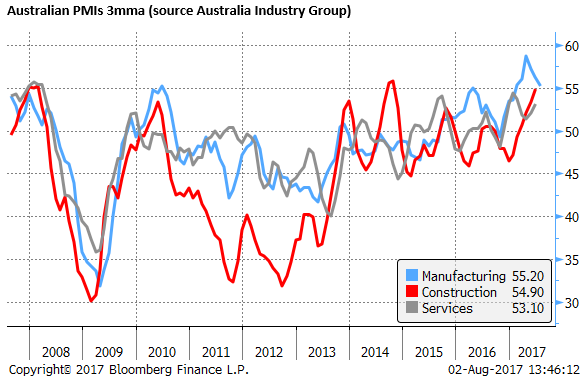 The RBA Governor’s speech last week, and the RBA policy statement this week suggest that the RBA sees slowing in the Australian housing market.  However, the most recent monthly data for July showed a 1.5%m/m rise in the CoreLogic median city house price index in July, up 10.4%y/y, re-accelerating from a dip to 8.3%y/y in May. 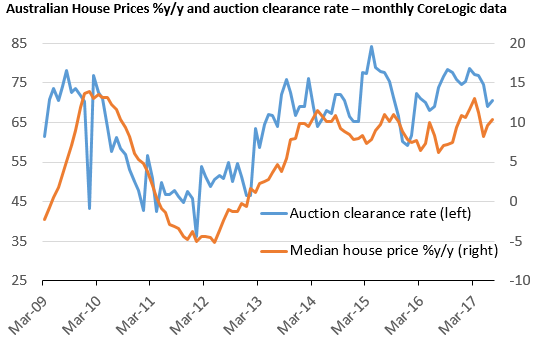 The relative trends in the construction sector suggest that the economic momentum is picking up in Australia, while it is ebbing in New Zealand.

Also contributing to the case for the AUD over the NZD is the resurgence in industrial commodity prices.  While there appear to be skeptics that the resurgence in Chinese steel prices can continue, the rise in commodity prices is broad-based.  Aluminum and copper prices are up solidly over the last month, and oil prices have also rebounded supported by a new record high in US gasoline demand, above the seasonal average over the last 5-years, and signs that excess US oil inventory is adjusting. 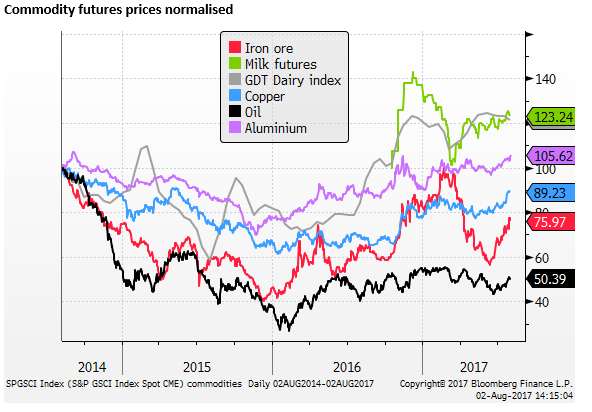 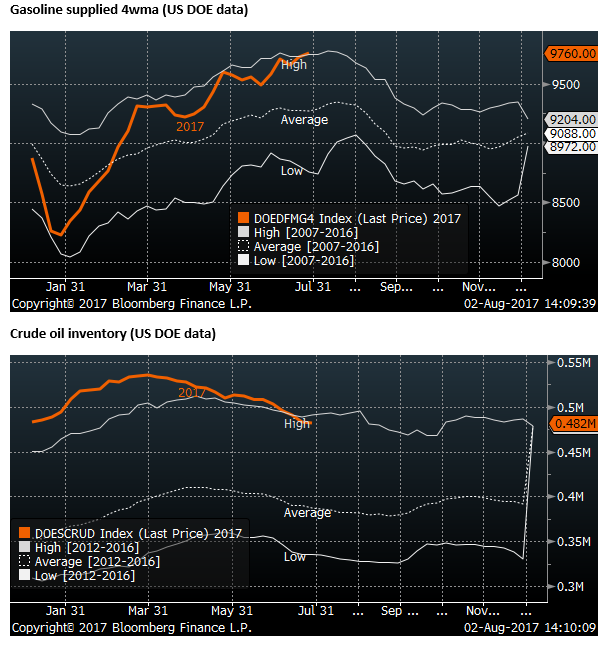 The breadth of the gains in commodity prices tends to suggest they are being supported by stronger global demand, rather than special factors. 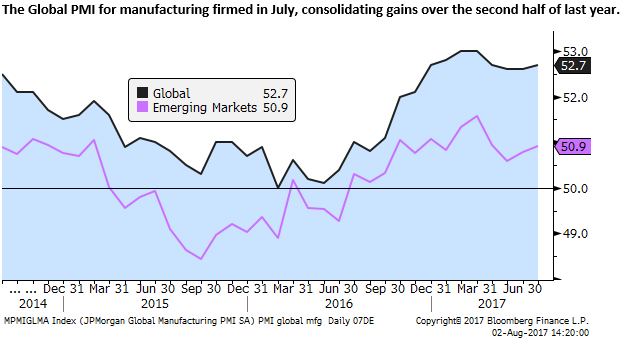 Political and economic uncertainty in NZ

The polls suggest that the populist NZ First party is gaining in the polls and will control the balance of power and be the kingmaker in the next government.  The hot button policy issues of rapid immigration and housing affordability are being exploited by NZ First. 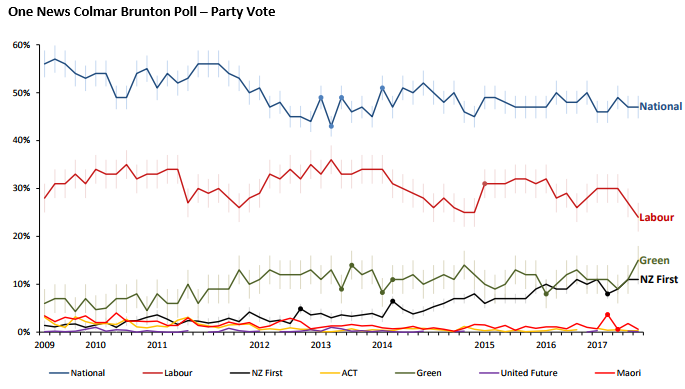 The ruling National Party has held government since 2008 largely on the back of its own vote, with close allies, single member parties, ACT and United Future.  The prospect of a National /NZ First coalition or even a Labour/Green/NZ First coalition does not appear to have been given much thought by the market yet.  However, one of these two outcomes appears more likely.

NZ First is likely to hold the balance of power and will demand inclusion of some of its populist policy agenda for its support.  This is likely to include tougher restrictions on immigration and on foreign investment into the domestic property market.

The Labour Party has responded to the fall in its polls by replacing its leader in favour of its younger and more popular former Deputy, Jacinda Ardern. She may succeed in further drawing support away from the ruling National Party.

All parties have shifted in the direction of less immigration, and restrictions on foreign investment in housing.  However, Labour and NZ policies are more severe than Nationals.  The potential policy shifts on the housing market and immigration generate significant economic uncertainty.