Global markets have the feel of corrective price action after a big run-up in recent months and blow-off top earlier this week. The market had been running up on news of re-openings from lockdowns around the world, and extreme monetary and fiscal policy easing.

The market had drawn hope from reports on progress on vaccines and ignored risks related to US-China trade relations.

The peaking in the market may reflect a return to considering the risks that the economic recovery from extreme depths will stall before returning to full employment in a world where people continue to live with the COVID virus risks for some time.

We continue to see reasons for the market to resume a rally, although we may move into a more gradual path for asset prices going forward.  We see the potential for markets to rise further as the year progresses on progress for vaccines and treatments, and more fiscal spending that will shift from financial support through lockdowns to boosting aggregate demand in recovery.

There are risks to consider including the tightening political race in the USA and US-China trade relations.  And of course the pace of growth in COVID.

The recent broad market rally was supported by news of the removal of restrictions and lockdown rules around the world.  This has generally continued, although in many cases it is occurring without clear progress in flattening the curve in new cases.  It appears that governments are moving from concerns over health risks to concern over the economic and financial damage from lockdowns.

It may be regarded as positive for the global economy that governments are willing to take more risks on health to restart their economies.  However, a limiting factor for the market, and one that may be contributing to the fall in risker growth-leveraged assets on Thursday, is that living with the virus may prevent a full return to normal activity, and the recovery may stall below full employment.

Global COVID cases daily change – the number of new cases per day globally is trending higher over the last month (127,775 on 10-June).  The number of outstanding cases is still rising but at flat trend (38,313 on 10-June) 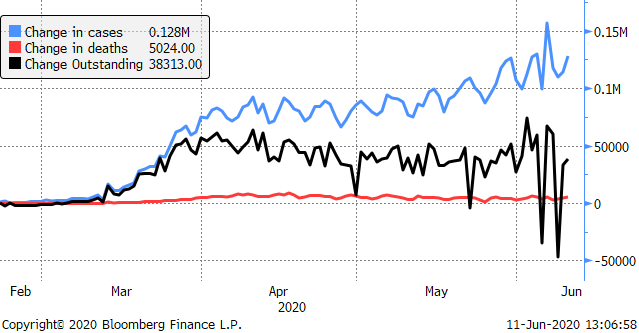 Germany recorded the fewest new cases since the end of Feb, and the infection rate fell back below the key threshold of 1.0.  Overall, in the Eurozone, it appears that the region has made significant progress in flattening the curve. Previous hotspots in Italy and Spain have significantly flattened their curves.  This might help support Eurozone assets and currency.  The EUR is notably holding up better than many other currencies on Thursday.

The UK is still experiencing a significant number of new cases, but the trend is declining.

The number of new cases daily in the USA is also declining, but slowly and it is still experiencing around 20,000 new cases per day.  There are increasing numbers per day occurring in some states; including California, Texas and Florida.  The rising numbers in several states contributed to weaker US equity markets on Thursday.  The recent protest movement on race relations may be contributing to nerves over fuelling new infections.

The fastest pace of growth in daily new cases in the world is occurring in countries in South America, Africa and the Middle East. Rapid growth is still occurring in India and Indonesia. Most other countries in Asia, Australia and New Zealand are recording low or no new cases. There is significant growth in Russia and the United States.

COVID daily new cases – curves flattened in Eurozone, and to a lesser extent in the UK 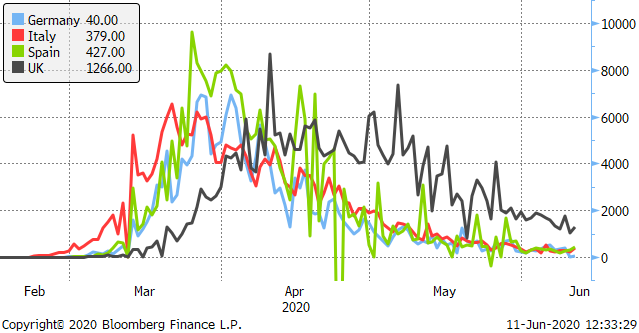 The number of new cases daily in the USA is also declining, but slowly and it is still experiencing around 20,000 new cases per day. It is rising in several large states 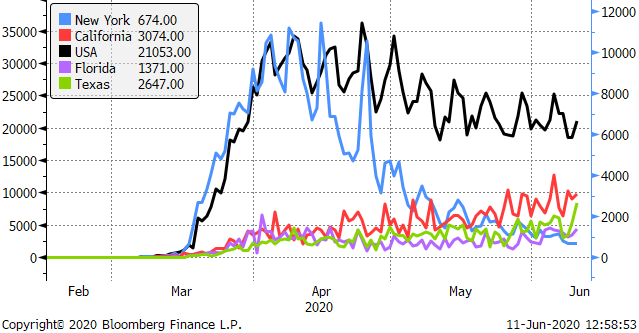 Map of COVID cases colour coded by rate of growth – growth rate is high in South America, Africa and the Middle East, India and Indonesia.  It is still significant in the United States and Russia (Source: NY Times) 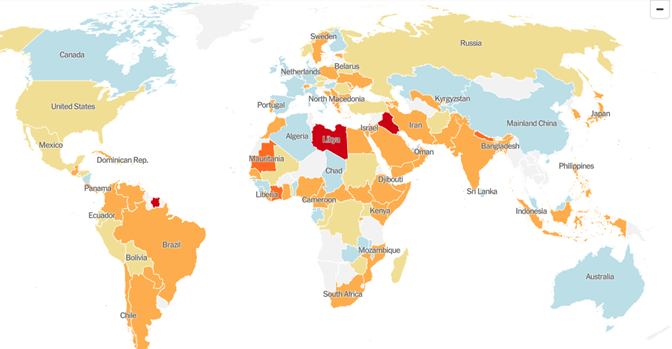 In the USA, COVID case growth has slowed in the earlier hotspot in the North East, but it is significant in several southern states including the Carolinas, Florida, Texas, Arizona, and California, and parts of the mid-West 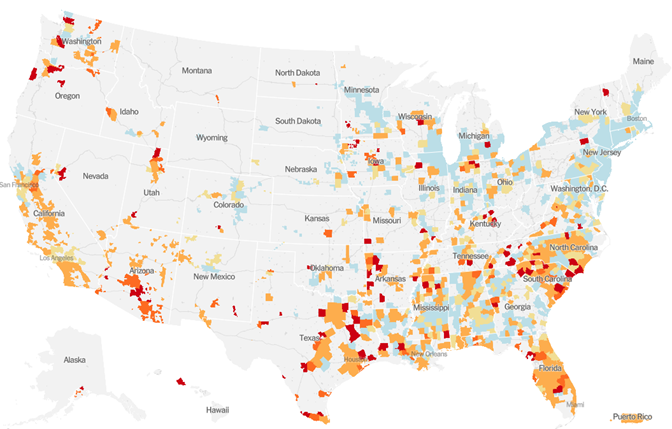 In the recent broad market rally, one of the factors supporting the market was hopes of a vaccine.  There was positive news on Thursday. The WSJ reported that –  The federal government plans to fund and conduct the decisive studies of three experimental coronavirus vaccines starting this summer, a lead government vaccine researcher said.  Moderna Inc.’s vaccine is set to be first, starting in July, followed in August by one co-developed by Oxford University and AstraZeneca PLC and in September by Johnson & Johnson’s, he said.

Separately, Pfizer Inc., which with partner BioNTech SE has one of the more advanced vaccine candidates, could begin its Phase 3 trial as early as July, a person familiar with the matter said.

In May, Moderna said its vaccine, codesigned with NIH researchers, was generally safe and induced immune responses in a small, early-stage study. The second phase of testing just began.

Researchers hope the trials will yield answers within six to eight months of their starts, Dr. Corey said. Some vaccine developers have said their shots could become available for emergency use on a shorter timeline, possibly as soon as the fall.

Bloomberg reported – Regeneron Pharmaceuticals Inc. said it had begun human trials of a new antibody cocktail for Covid-19, part of an ambitious clinical-testing plan that could lead to a new treatment option by the end of summer if all goes well.

“Our data suggests putting together multiple antibodies could really be the key to having a major impact on the virus,” said George Yancopoulos, the company’s co-founder and chief scientific officer

He said lab studies that Regeneron plans to publish soon show the coronavirus will quickly develop resistance to a single antibody-based treatment but that when multiple antibodies are combined the virus doesn’t fight them off.

If the study goes well, “by the end of the summer we might have data that might support more widespread use,” said Yancopoulos.

In its statement, Regeneron, based in Tarrytown, New York, said its antibody might be ready long before vaccines are widely available. And even if a vaccine works, antibody cocktails may still be useful long-term for elderly patients or those with weak immune systems, who often don’t respond well to vaccines.

Numerous companies, including GlaxoSmithKline Plc and AstraZeneca Plc, are working to develop coronavirus antibody treatments. Earlier this month, Eli Lilly & Co. said it had started human tests of an antibody treatment it developed with AbCellera Biologics.

A factor that has been a key support for the rebound in riskier assets is the aggressive fiscal and monetary response.  Record low rates and government bond yields are pushing investors into risky assets.  This should be a key factor supporting the market for some time.

A factor that may get more attention in the coming weeks or months is a step up in government spending on infrastructure and programs that are designed to support aggregate demand.  Spending to date has been focussed on financial support to underpin incomes and prevent bankruptcies during the lockdown.  Many governments are preparing a new wave on spending to support economic recovery.

The US government is also discussing more fiscal support, although this may be held up by the political progress.

A factor that concerned traders and had some impact on holding back Chinese and some other Asian assets in May is US-China trade and economic relations.  These concerns were, however, largely ignored by the global market in the recent resurgence in riskier growth-leveraged assets.  If the fall in riskier assets markets on Thursday heralds a sustained less bullish environment, difficult US-China relations may have a more significant negative impact on asset prices.

As the US election approaches, we need to be wary of rising tensions.  The race is tightening with Trump and the Republican Party losing support in recent weeks, and this may result in more desperate statements from the Trump administration against China.

Race relations and policing will be key election issues. A tight contest might increase pressure by the Administration to support the economy. An issue is whether one party or the other gains control of both houses on Congress.

Bloomberg reports that Democrats prospects are rising  – The fallout from the coronavirus pandemic and mass protests against police brutality have driven down President Donald Trump’s poll numbers and threatens to bring down GOP incumbents with him, as Democrats look to expand a political map already tilted in their favor.

Trump’s approval rating fell to 39% in a Gallup poll conducted May 28 to June 4, down from 49% in the most recent poll and the lowest since October.

The GOP is defending 23 Senate seats to just 12 for Democrats, with Democrats needing a net gain of at least three seats in November to take control of a chamber now divided 53-47 in Republicans’ favor.

Trump’s net approval rating has fallen sharply from a peak in March since 2017 to a low October last year, falling sharply since mid-May 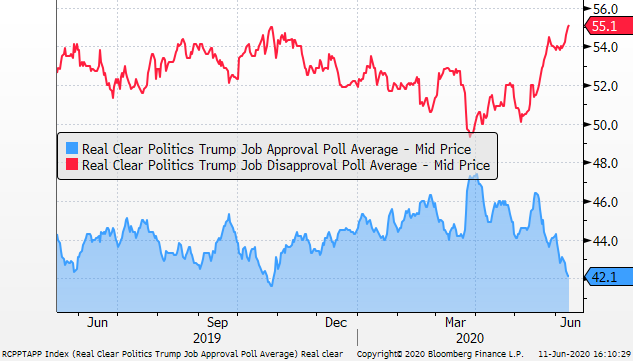 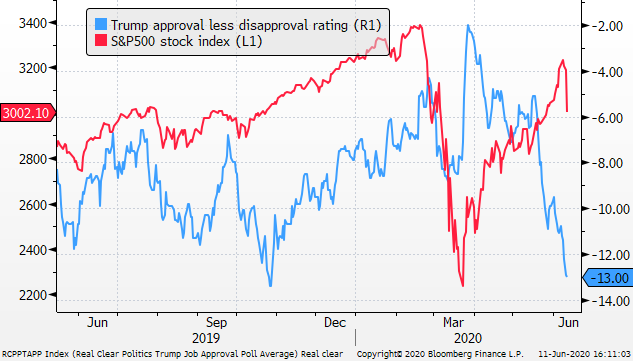 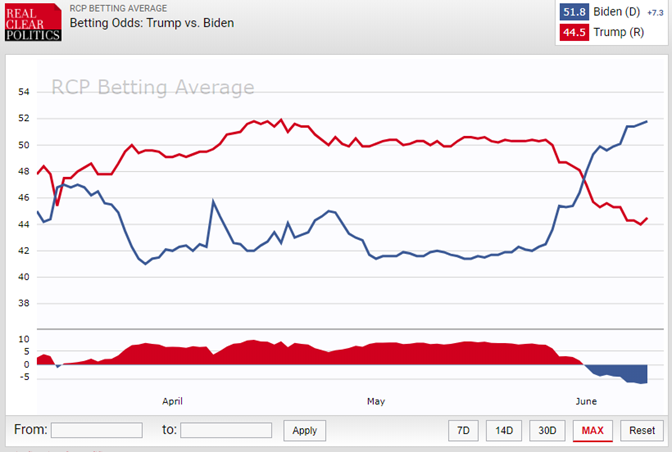 The fall in the equity market on Thursday was very large, but in the context of the rapid rebound in global equities over the last three months or so, it may be viewed as a correction from an overbought market.  The fall largely reverses the gains made over the last two weeks.  How long this correction lasts remains to be seen, but it will soon be into key support zones established in the recent recovery. 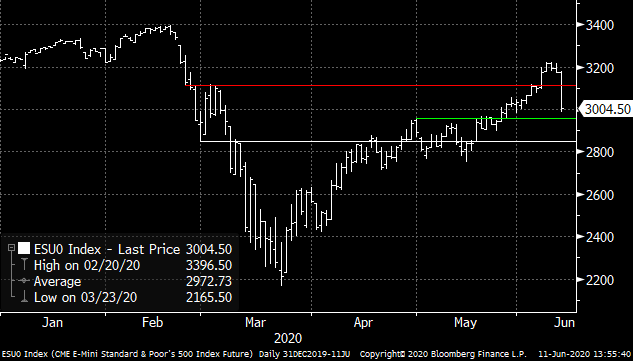 One of the weakest currencies on Thursday was previously one of the strongest – the AUD.  Both the AUD and equity market peaked on Monday.  Both peaked through key resistance levels earlier this week in what might have been a blow-off capitulation by some bears in the market.  The fall back on Thursday comes on the back of some increased volatility consistent with an over-bought market. 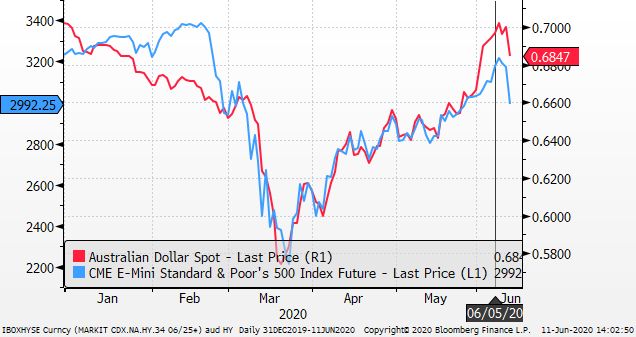 Asian currencies were generally weaker in-line with the stronger USD and risk-off market action on Thursday.  INR has been weakening for over a week since the first days of June, lagging other currencies in the region.  It is struggling to cope with its COVID outbreak and is facing ongoing stresses related to excesses in its financial sector over recent years.  Bloomberg Economics reported on the slowing bank and overall credit growth in recent months earlier this week.

IDR has been the weakest Asian currency this week, after being one of the fastest to rebound in the recent risk-on market that peaked on Monday

One currency that has managed to firm against the USD on Thursday is the THB.  It is still one of the weakest currencies in the region year-to-date, but it has been steadily rising since a low in March, and gains have accelerated somewhat this week.  Thailand has been one of the most successful countries in flattening the COVID outbreak before it became very large, reporting new cases per day are in the single digits for over a month, and has made considerable progress on removing lockdowns and restrictions.  It is expected to remove remaining domestic restrictions on Friday.

In a statement Thursday, the Bank of Thailand said the baht is moving in line with regional currencies based on dollar weakness and capital inflows. Much of the influx is from Thai investors and funds repatriating overseas investments rather than from foreign investors, it said. (Bloomberg)

The country’s Finance Minister Uttama Savanayana told reporters in Bangkok on Thursday that it’s the central bank’s job to make sure the baht isn’t an obstacle, adding the currency should move in line with the economic recovery. (Bloomberg) 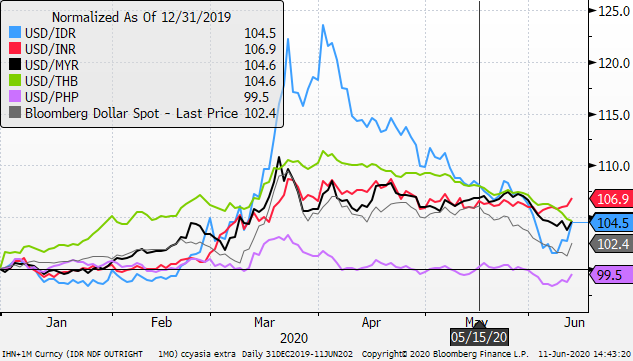