An important point to recognise is how broad-based the fall in the USD has been this week, extending across currencies and commodities priced in dollars.  A catalyst may have been the EU fiscal package, helping push the next most significant global currency (the EUR) higher, but it’s clear that the USD is the weakest link.

Broad dollar indices have broken below their June lows, extending the USD down-trend since May 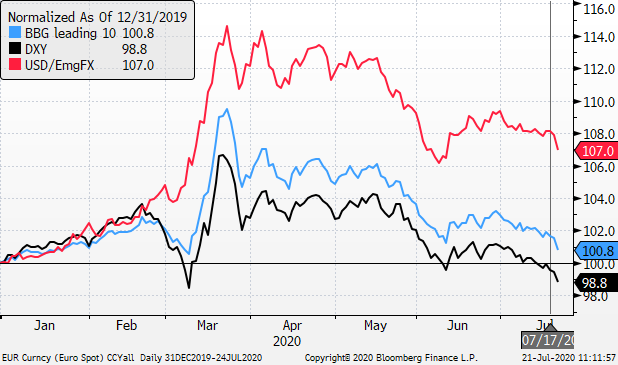 In reviewing the price action for the USD this year, it spiked in March as fear of the global economic fallout from the spread of COVID reached its peak.  This was accompanied by a crash in USD term liquidity and a spike in USD borrowing costs. The Fed responded with unprecedented quantitative policies, directly injecting liquidity and supporting credit markets.

The Fed actions dropped what had been relatively high US real yields to very low real yields, crushing the USD yield advantage to levels not seen since the response to the Great Recession.  This set the stage for a weaker USD.

A weaker USD has taken time to develop because the USD and US assets are the primary safe haven, and only as global investor risk appetite has improved have conditions become more conducive to a weaker USD.

USA 5-year real yield plunge in recent months to deeply negative levels, to a low since 2013 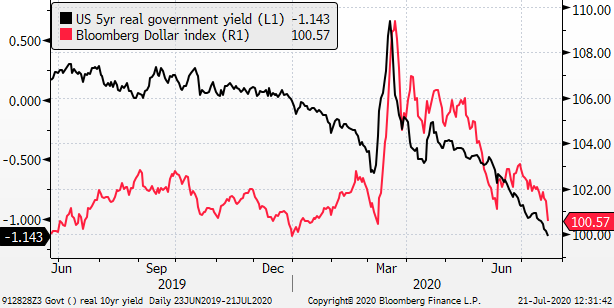 A catalyst for risk appetite

A weaker USD may then place more focus on weak USD fundamentals. Analysts may start to predict deeper falls in the USD based on political dysfunction, out of control fiscal spending, poor handling of the COVID crisis, and extreme low real interest rates engineered by the Fed.

AUD accelerates as it breaks above the June high and 2019 year-end high both around 0.700.  This has been a significant pivotal region for the AUD.  The AUD appears to have broken out of a downtrend over the last few years since Jan-2018 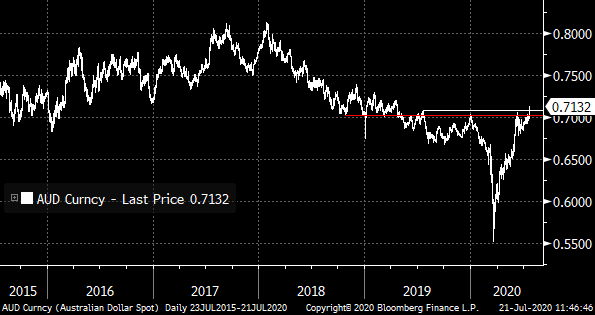 The EUR has broken above the June high and the short-lived spike high in March.  It has broken above 1.150, a pivotal level over recent years – around the peak during the early years of the ECB QE and negative rate policy in 2015/2016, and base (neckline) of the 2017/2018 peak.  The EUR appears to have broken a downtrend since Jan-2018 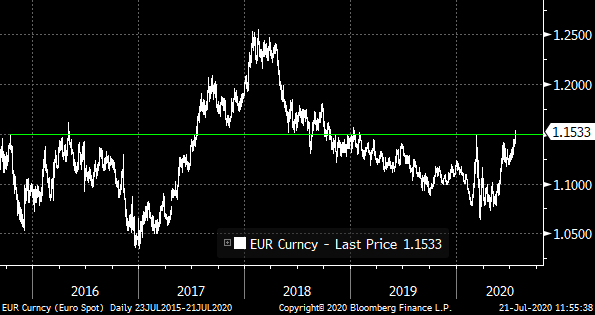 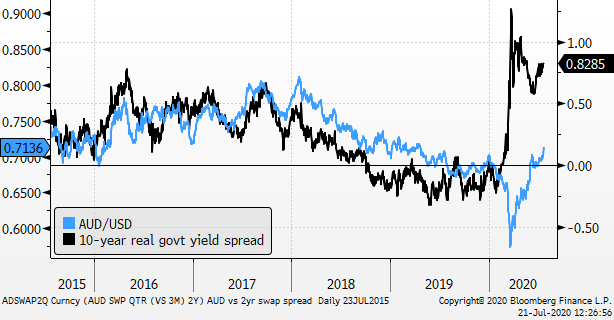 Investment Grade Corporate CDS indices fall to a new low in the Eurozone since Feb, widening the gap below USA indices.  This may reflect stronger expectations for the health of Eurozone companies and the relative strength of the central banks’ QE programs targeting private-sector assets 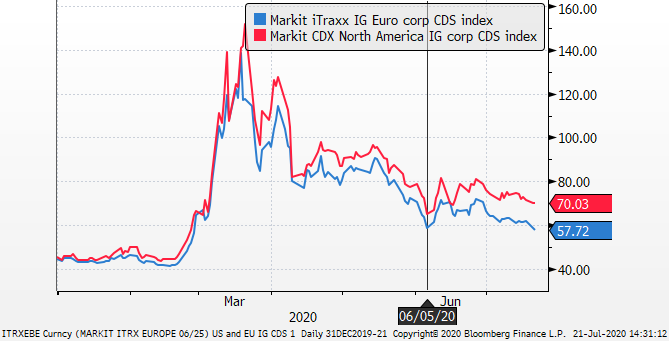 The AUD has been one of the most consistent gainers over recent months, including this week.  Key factors supporting the currency are strong gains in iron ore and energy prices in recent months.  As Brazil struggles to lift its iron ore output, Australian producers are benefiting from stronger demand from China.  Australia has established a solid trade surplus and persistent current account surplus.

The Australian economy is facing severe disruption as are all in the world from the COVID crisis.  A renewed surge in cases and restrictions reimposed on social activity in the state of Victoria is causing some setback in the outlook for economic recovery.  However, the RBA has indicated that it is in no hurry to expand its policy easing measures which it thinks are effective.  While these are significant with cash rates in the low teens and yield curve control centred on a 0.25% 3-year rate target, the RBA has rejected calls to consider negative rates or set a quantitative asset purchase target.

Furthermore, the RBA sees the AUD as consistent with its fundamentals and does not think intervention to cap the AUD or push it lower will be effective.

The AUD has been highly correlated with measures of risk appetite such as high yield and emerging market credit spreads.  These spreads have narrowed to a low since March.  However, the pop in the AUD in the last day may make it seem that it has moved ahead of the rebound in risk appetite 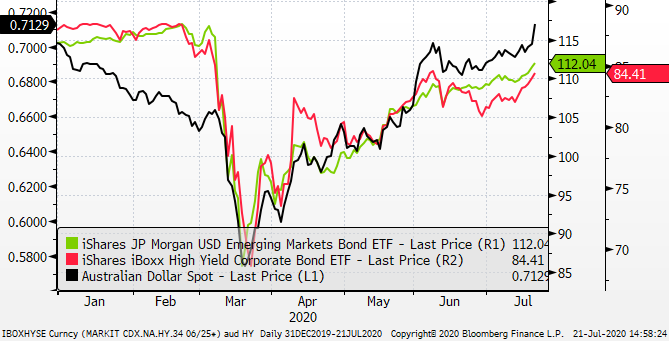 The rise in the AUD in the last day also looks a bit too rapid compared to a more moderate rise in US equities.  Nevertheless, US equities are at a high since Feb, and the move up in the AUD may reflect a clearer broad-based fall in the USD 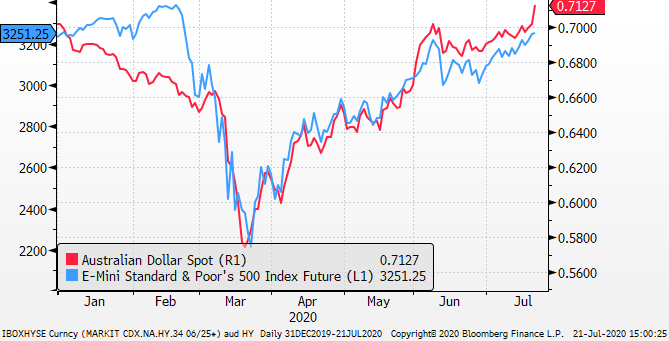