ECB was the last straw, AUD’s hold onto 70 slipping

While the downgrades to the ECB outlook may not have been unexpected, they appear to have been viewed as the last straw for EUR bulls.  EUR has failed to respond to lower US rates in recent months or a moderate recovery in global risk appetite.  An expectation that ECB rates policy normalisation may take much longer may be encouraging the use of the EUR as a funding currency for ‘carry trades’.  The AUD is flirting with key support (0.70), and widespread expectation that the RBA will capitulate on its long-held reluctance to cut rates below 1.5% is weighing on the currency. Labour market data may hold the key.

The lack of bounce in the EUR this year despite lower US yields and a shift in Fed policy outlook is discouraging for EUR-bulls.  Bloomberg reports that Goldman Sachs currency strategists have ended a call for a weaker DXY USD index, taken in early-Jan in on what they perceived as shift Fed policy trajectory, following the ECB meeting last week.

It seems they have not totally given up on a weaker USD view, instead proposing selling the USD against the JPY; a trade that seems to favour a view that global growth and risk appetite may continue to fade. 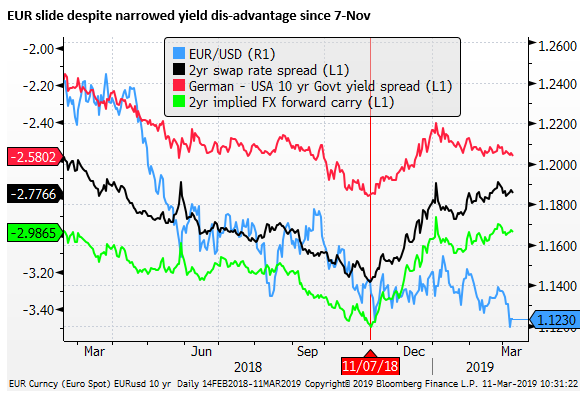 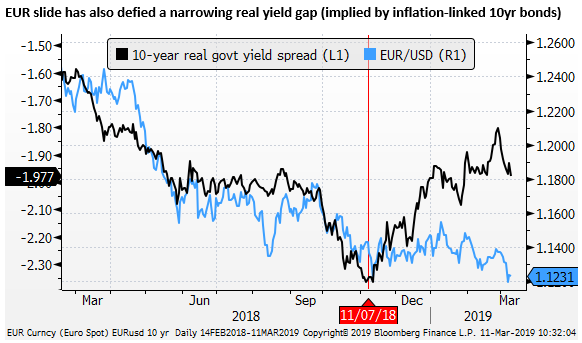 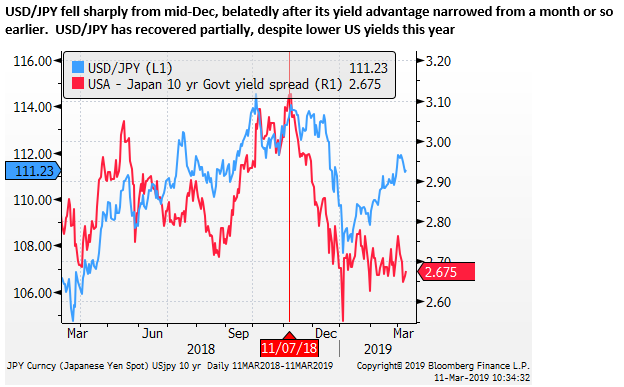 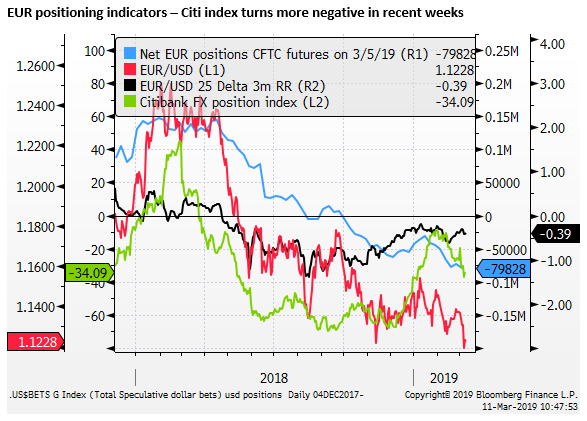 One might conclude that sentiment towards the EUR has moved into a funk that might take quite some time and improvement in the news to break out of.  This suggests that rallies will be sold into, and a downtrend may persist for the time being.

The events that weakened the EUR last week should have been arguably expected and factored-in to the EUR.  However, it seems instead they were the last straw for frustrated EUR-bulls, and only reinforced the negative views of EUR-bears.  Price action is an important determinant of sentiment, and the slump to new lows last week suggests that there may be significant underlying weakness in the EUR.

Even if the EUR-bulls may see a lower US rates outlook, the Eurozone appears much further from raising rates,  its rates are significantly negative, and the outright yield disadvantage is large and likely to remain large for the foreseeable future.

The Eurozone economy is flirting with recession and has experienced a much bigger slump in growth than the USA that highlights its higher dependence on global trade growth.

Uncertainty over the global growth outlook has increased, and if the slump late last year persists, it may leave the Eurozone operating below trend and slipping further away from the ECB’s 2% inflation goal.

Euro-Funded Carry Trades for Emerging Markets Are Back in Vogue; 28 Feb – Bloomberg.com

This is notably different from views in 2017.  At that time, when the EUR was in a rising trend, peaking around 1.25 in Q1-2018, even as the US was still raising rates, the market appeared to be unwinding hedges on Eurozone assets.

The market was seeing a sustained recovery in the Eurozone moving the ECB towards unwinding its QE and rate normalisation beginning within a year.  Even though the outright EUR yield disadvantage was large and not set to narrow much for some time, the market thought the EUR was already significantly below its expected long-run average level, and unlikely to fall further.

As such, with solid gains expected in European equities, there seemed little advantage retaining EUR hedges.  If the EUR did rise, it could detract from Eurozone equity returns, making the case to combine EUR and Eurozone asset exposure.

At that time (during much of 2017), In the context of synchronised global growth and buoyant global risk appetite, the EUR tended to rise with EM currencies, reinforcing a broad weakening trend in the USD.

However, if the EUR is now perceived to be a ‘funding currency’ for risk on trades, we might expect it to remain weak even if global asset markets, including EM currencies, are rising. As such,  it may struggle to regain positive momentum even if confidence in a global recovery builds over the year ahead. 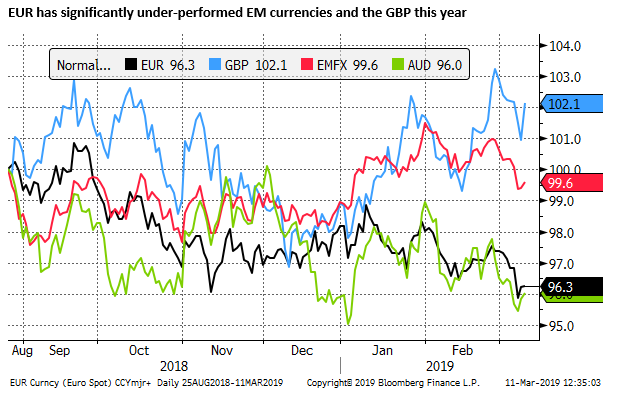 Considering that the European economy appears to have been significantly dampened by the US-China trade dispute and the fallout to Chinese import demand, one might have thought the EUR would also benefit from these same elements that appeared to lift EM currencies.

Certainly, the economic data from the Eurozone and China in the early months of this year has been surprisingly weak and may have countered any positive vibe from Chinese policy action and US-China trade talks. But the significant under-performance of EUR compared to EM currencies suggests that it may have moved into a more sustained underlying negative regime.  It is also notable that the EUR has benefited little from a recovery in the GBP this year on diminishing fear of a no-deal cliff-edge Brexit.

This negative regime may reflect a sense that normalisation in EUR rates will take much longer, EUR’s yield disadvantage will persist, and upside for EUR is limited, making the case to use EUR as a funding currency for ‘risk-on’ trades.

European equities no longer seem set to out-perform with issues overhanging banking stocks, Brexit risks, greater political uncertainty, and growing unease about the health of the auto sector globally.  There is no longer an urgent need for investors to consider unwinding EUR hedges on their asset holdings (as these Eurozone crisis era hedges were largely unwound during 2017), and the region does not seem to be a draw for alpha capital investment.

There are reasons to be restrained in setting EUR shorts.  Brexit may be moving towards a less disruptive outcome, Chinese policy stimulus may precede improved Chinese, global and European economic data.  The US may soon reverse some or most of its tariffs on Chinese goods, and trigger a rebound in confidence for European assets.  However, if the EUR has moved into a weaker regime over the last year; one where there is no overhang of Euro crisis era EUR hedges, and EUR is viewed as one of the best currencies for funding ‘risk-on’ or ‘carry trades’, then its upside may be limited, and it could retain a broader downtrend for the foreseeable future.

AUD has diverged from EM equities and commodities

As mentioned, the AUD has also been a laggard this year.  We have at times warned that the AUD might rebound on Chinese policy stimulus, moves towards a US-China trade truce, and recovery in commodity prices this year; not to mention a surge in iron ore prices on the Vale dam disaster in Brazil.  We had noted a high correlation in the AUD with Chinese equities over the last year, and the rebound in Chinese equities may have sparked a rebound in the AUD. 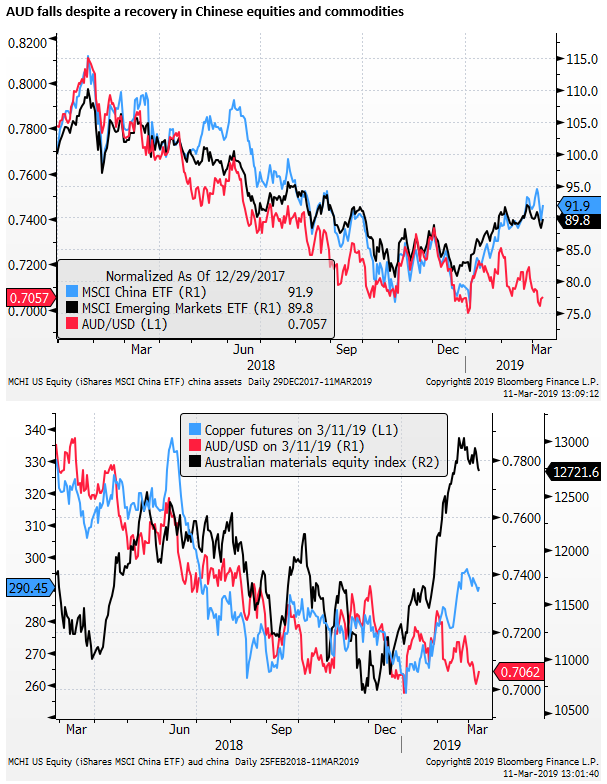 The lack of bounce in the AUD and EUR to some extent may reflect fear that the weaker Chinese economic outcomes over recent months are less to do with the US-China trade dispute and more to do with underlying weakness in the Chinese economy and financial system.

There are doubts that the Chinese economy will respond to policy stimulus, and that stimulus measures will be limited as China works to deal with the excess debt and capacity in the economy.

The Chinese equity market may not be regarded as a pure reflection of economic sentiment, but rather subject to manipulation by the Chinese government; via directing purchases by state-owned institutions, rule changes to margin lending, and media spruiking designed to support the share market.

The rebound in global equities may be largely seen as a rebound from oversold conditions at the end of last year rather than optimism in a sustained recovery in the global economy.  In other words, the market may have been reluctant to believe that the recovery in Chinese and global emerging markets are sustainable and translate into a stronger outlook for external demand for the Australian economy and the AUD.

In any case, the divergence in the AUD from stronger Chinese equities widened significantly in early-Feb after the RBA shifted from a soft tightening bias to a neutral bias, admitting that rates may need to be cut again.

Up to that point, for the last several years, the RBA had appeared very reluctant to cut rates further.   As such, while the shift to a neutral bias was a modest shift in policy guidance, it had a considerable impact on the market outlook for rates.

The key point of concern is that household spending may be slipping below trend and experiencing a negative wealth effect from low wage growth expectations and a weaker housing market.  The Q4 GDP report last week added weight to these concerns with considerably weaker than expected growth in household spending. 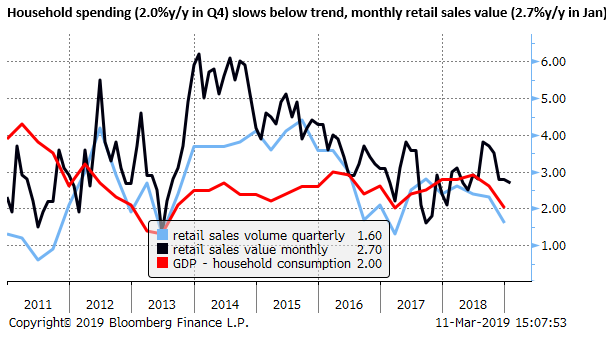 The residential construction sector also appears to have peaked and be facing a sharper downturn than the RBA may have cared to admit as building approvals have fallen rapidly from their peak over the last six months. 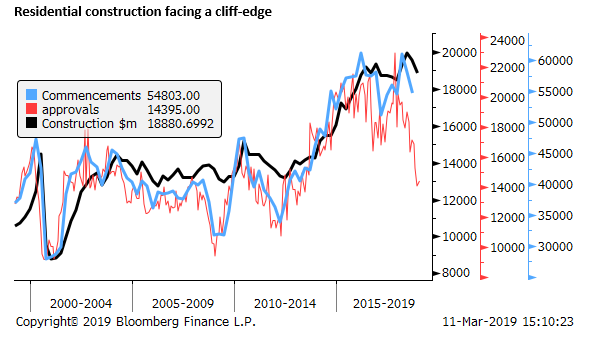 Notwithstanding the pressure for rate cuts, the RBA has expressed relative optimism that strength in the labour market that has surprisingly diverged from the weaker GDP data, will gradually lift wage growth, and sustain momentum in the economy.  It retained its neutral policy stance last week, projecting unemployment to fall from 5.0 to 4.75% later this year.

Crucially, Westpac, NAB, and most domestic analysts expect the unemployment rate to rise above 5.0%, weakening income growth, forcing the RBA to cut rates before too long. 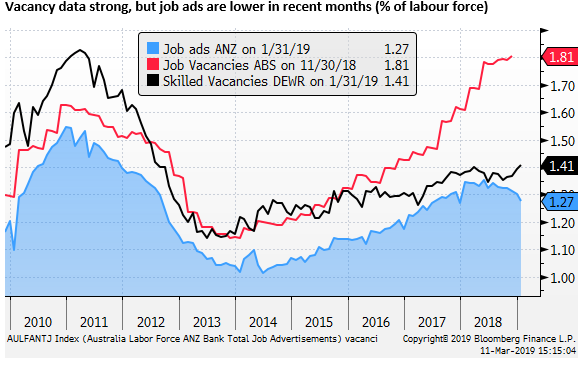 It is easier for many investors to conceive downside risk for rates in the midst of a sustained downturn in the Australian housing market, 18 months in duration, and little sign of abating in the near term.  This does appear to be contributing to weaker household spending and a faster fall from a peak in residential construction. 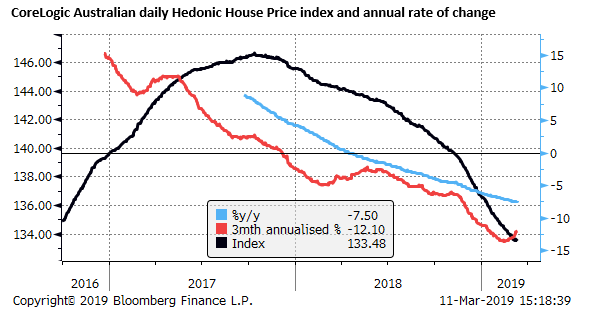 A national election is due in May, and polling shows a probable change of government.  This should not be viewed as a surprise and may not provide an additional reason to sell the AUD.  In fact, it might be regarded as supporting the AUD, as it will likely boost plans by both major parties to boost fiscal spending to buy public support.

Nevertheless, the conventional thinking is that the AUD tends to fall into elections,  reflecting increased policy uncertainty.  The probable shift to a Labor Party government will also allow it to implement its policy of removing most tax breaks for property investment that may prolong the downturn in the housing market.

The AUD has retreated to just above the 0.70 level for the third time since October last year (ignoring the flash crash in thin early-Jan markets.   A sustained fall below this level is likely to exacerbate negative sentiment towards the AUD.

Considering the widespread calls for lower rates, impending election, ongoing weakness in the housing market, lack of response to external factors, underlying doubts over the Chinese economy and financial stability, most commentators appear to think a break below 0.70 is only a matter of time.

However, much may depend on the labour market data.  The RBA has highlighted that it will be watching this data closely, and several analysts are expecting the softer activity indicators and business sentiment, and recent ebbing in job ads, to slow employment growth.

The RBA has noted that Australia is not alone in experiencing more sustained strength in employment data.  For instance, Canadian employment data was much stronger than expected on Friday, despite weak Q4 GDP growth.  Even the Eurozone has continued to display solid employment growth in recent data, belying the sharp retreat in GDP growth.  These trends in other countries caution against expecting a retreat in Australian labour data next week.