The market appears somewhat prepared for a dovish tilt in the ECB policy meeting on Thursday.  This may involve an acknowledgement of downside risks to their outlook.  It does not appear that the market expects any significant change in the key policy guidance on rates at this time, but it is possible that the ECB extends its expected period before a hike further to push rate hike expectations beyond this year.  The topic of TLTROs may come up in questioning.  The ECB may be mulling announcing a fresh series of TLTRO as soon as the March policy meeting.  This should be seen largely as extending the existing QE policy, but at first brush, the market could view such discussion as a further dovish tilt.

We were intrigued by a Bloomberg article written by their Euro-area economist David Powell on Tuesday that speculated that the ECB would announce a new round of Targeted Long Term Refinancing Operations (TLTRO) as soon as the March ECB meeting.

This suggests that the topic may come up in questioning during the ECB President Draghi press conference on Thursday.

We are concerned with how such speculation might be construed for the overall stance on monetary policy and the EUR.  At first glance, the market might view this as bias to ease policy in the face of weaker than expected economic activity over the last year, and weaken the EUR.

The ECB account of the 13 December policy meeting noted briefly that the topic of TLTROs had come up;  in that, “the suggestion was made to revisit the contribution of targeted longer-term refinancing operations to the monetary policy stance.”

Firstly, it appears that the consensus developing for the policy meeting tomorrow is that the ECB will leave the instruments and guidance of policy unchanged, but adjust their balance of risks.

The ECB does not present new staff forecasts for GDP growth and inflation at this meeting, but many are already predicting a need for a further downward revision at the time of the March meeting to reflect the weaker than expected activity data since the 13-Dec policy meeting.  In particular, the sharp contraction in industrial production reported in November (-3.3%y/y).

Already, the ECB revised down its GDP projections in December (a third time in a row since June last year).

Tweaking the balance of risks

One of the first things the market will be looking for in the press conference introductory statement will be whether the ECB moves to state that the balance of risks is now assessed to be biased to the downside (not just moving to the downside).

We can see a high probability of the ECB tweaking the balance of risks statement, although we are not convinced it will change anything substantive in this statement.  A tweak to state a downside bias might be expected to weaken the EUR a bit, but it appears to be fairly widely expected and may already be reflected in a weaker EUR over recent weeks.

A more substantive shift in policy might be to lengthen the guidance of potential timing before a rate hike.  They could move from “at least through the summer of 2019” to “through the Fall/Autumn” or “through the end of the year.”  Any shift in this guidance might cause a more significant fall in the EUR.

As it stands, the market has only around 4bp of tightening in the policy rates by the December meeting this year.  As such, on the face of it ,it may seem the market is prepared for some lengthening in the guidance on time before a hike.  However, any lengthening in guidance would probably still be a significant dovish surprise for the market, in our view. 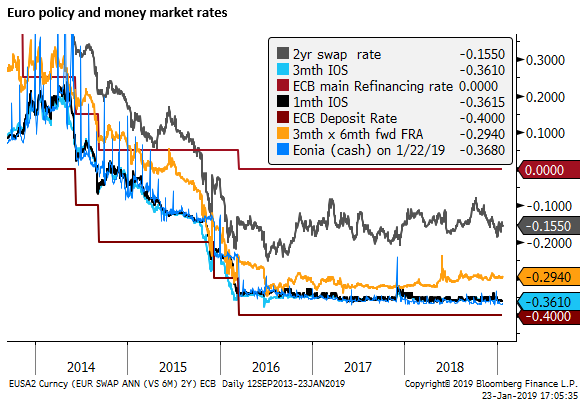 Another possibility is a ‘policy twist’ where the ECB states an intention to lengthen the average maturity of their holdings of bonds.  This was a policy adopted by the US Federal Reserve in late 2011 and 2012 to enhance the downward pressure on longer-term bond yields with the aim of boosting other financial asset prices and enhancing the effectiveness of their QE policy.   However, this seems unlikely given policymakers since 2016 have acknowledged that excessive flattening in the yield curve with negative interest rates can reduce bank profitability and dampen their capacity to lend to the non-financial sector, undermining the effectiveness of QE policy.

Some urgency to address TLTROs

As discussed up front the ECB may discuss a new round of TLTROs.  It may be somewhat premature to make an announcement at this meeting, between staff forecasts and still around 18 months before the previous TLTROs begin to mature, but it is a topic that could come up in question time, and might draw a response from ECB President Draghi.

As the Bloomberg article points out, there is some urgency to revisit the TLTROs; since by mid-year, around half of those outstanding will have a maturity of less than one year.  Therefore they will no longer count towards banks’ ‘Net Stable Funding Ratios’.  This is a prudential measure introduced in the wake of the 2007/09 Global Financial Crisis to require banks to maintain ‘more stable’ longer maturity funding. Banks would then be forced to access longer-dated funding in the money markets, placing upward pressure on market interest rates and bank funding costs.  This might be considered a tightening in financial/monetary conditions; something the ECB would like to avoid at this juncture.

If the ECB were to decide to counter the potential upward pressure on bank funding costs, it might want to announce a new round of TLTROs in March enacting operations in June this year, and quarterly over the next four quarters to March-2020, to allow banks to roll over their maturing TLTROs into new long term loans (before they become less than one-year to maturity).

The ECB could allow banks to repay all outstanding TLTROs early to allow them to shift funding into the new longer maturity series of TLTROs.

How should the market react to TLTROs

How would or should the market react to such an announcement?  Were the ECB to do nothing, the market might push up mid-maturity EUR swap rates (around the 1 to 4-year term range), see some downside risk to banks’ share prices (owing to higher funding costs), and some upward pressure on borrowing costs broadly in the Eurozone.

If the Eurozone economy was performing solidly and seen on a path to reaching the ECB’s inflation target, a decision by the ECB to let the TLTROs roll off the balance sheet might be seen as a reason to buy the EUR.  But that is not the case at the moment.

If the ECB decides to introduce a new series of TLTROs to replace the maturing series, it might be seen largely as maintaining the status quo, and thus not a material shift in policy.

However, to some extent, it might be seen as a dovish tilt, demonstrating a reluctance to let old policy measures roll off, and a degree of concern over the state of the economic outlook slipping below potential.

It’s not clear that the market has given a lot of thought to the potential for fresh TLTROs, especially as soon as mid-year that based on experience would be announced by March.

As such, they may well start to enter the discussion at the meeting this week, and Draghi may be prepared to elaborate significantly on the topic.  If so, it could generate some additional weakness in the EUR, although it should be largely considered an extension of current monetary policy rather than a fresh measure.

How big are the TLTROs outstanding?

To put this context, the ECB balance sheet component “Longer-term refinancing operations” are currently Euro 724 bn (as at 18 Jan-2019).

This represents 15% of the overall ECB balance sheet assets of 4,706bn EUR.  It is the second largest component after 2,651bn (56%) in “Securities held for monetary policy purposes”; ie. the bonds purchased as part of its QE program.

Around half of these TLTROs are scheduled to mature in June 2020, around another 15% are due to mature in the second half of 2020,and the rest (around a third) in March-2021.

Apart from the fact that letting these TLTROs move into sub-one-year funding should start to tighten monetary conditions (from June this year), by mid-2020 their maturity without replacement would significantly reduce the ECB balance sheet.

They provided financing to banks for up to 4 years.

The first series included eight operations conducted quarterly from September 2014 to June 2016, with all TLTROs maturing in September 2018.

The rate on the loans was initially set at the Main Refinancing Operations (MRO) rate prevailing at the time of take up, plus 10bp.

On 22-January 2015, the ECB lowered the rate on the remaining six TLTROs to equal the MRO rate at the time of take-up (eliminating the 10bp spread over the MRO rate).

Banks had the option of paying back part or all of the loans after 2-years, on a six-monthly frequency.

There were limits set on how much banks could borrow using TLTROs, but they were generous with incentives encouraging banks to use the funds to lend more to businesses and households (excluding mortgages).

On 10 March 2016, with the end of the first series of TLTROs approaching, the ECB announced a further series of four TLTROs quarterly from June 2016 to March 2017.

These were similar but offered at a more advantageous rate to banks, linking the rate to the ECB’s deposit facility rate (the bottom of its policy rates corridor).  The deposit rate is currently -0.40%; at the time of the TLTRO II announcement on 10 March 2016, the deposit rate was -0.30%.  It was cut soon after to -0.40% on 16 March 2016, where it has stayed since for almost three years.

Banks paid a rate on the new TLTROs between the MRO (zero%) and deposit rate (-0.40%), with a lower rate applied based on the size and growth of their lending, incentivising banks to lend more.

Banks were also allowed to roll over all outstanding loans in the first series of TLTROs into the new series, allowing them to take advantage of the lower rate and new up to four-year terms.

The charts below taken from the ECB Bulletin Issue 3/2017 show the take-up in the TLTROs and the break-down in outstandings according to the operation in which banks borrowed the funds. 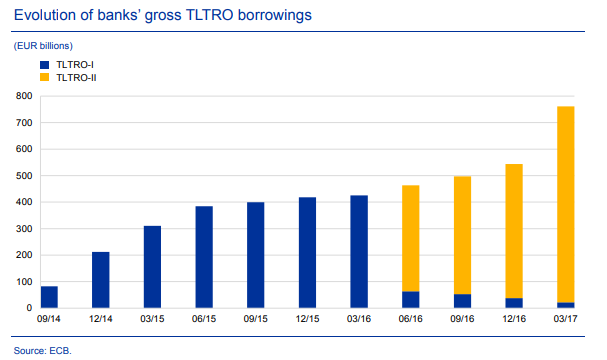 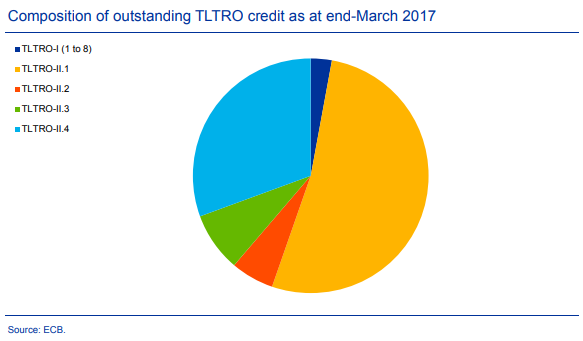 If the TLTROs are held for the full four-year term, around half of outstandings would be due to mature in June-2020, although banks had the option or repaying partial or all amounts after two years on a six-month schedule.

The component of the ECB’s balance sheet statistics that appears to include these loans suggests that the bulk of them are still outstanding, and around half will mature in June 2020.

To the extent that the size of the ECB’s balance sheet is the standard by which we might assess the degree of quantitative policy easing, an approximate 7% reduction in the balance sheet currently scheduled for June-2020 and a further 7% by March-2021 would represent a significant tightening in ECB policy.