EUR and GBP fortunes may diverge

Both the EUR and GBP have taken a beating in the last month.  The EUR is near key support and may recover somewhat as risk aversion related to Italy eases and Q2 economic reports recover.  However, we see the bounce as limited with Italian political risk set to linger and the potential for growing trade and political tensions with the US.  Higher oil prices should also boost confidence in the US economy over the Eurozone.  We have more confidence in a recovery in the GBP.  PM May is likely to resist the latest bout of political turmoil and progress has been made in Brexit planning and negotiations.  BoE rate hike expectations are likely to come back into focus.

EUR rebound may be limited

We are not convinced that this is the right time to turn risk-averse on Italy.  After the initial shock of a populist Italian coalition government that wants to increase deficit spending on social handouts and challenge EU fiscal rules, it remains to be seen how far it will go.

They have complained of being “blackmailed” by the selloff in Italian assets.  And indeed the weaker equity and bond markets should convince them to proceed cautiously with policies that may threaten euro membership or ongoing support from the ECB’s Asset Purchase Plan.

As such, it is possible to see a rebound in Italian assets and the EUR if the new government does proceed cautiously. Furthermore, to the extent that there is capital flight from Italy, much of it may go to other European assets, resulting in little net outflow from the EUR.

The Italian 10-year yield spread over bunds has risen to a high since mid-2017, when Italian yields were retreating from the political uncertainty generated by the failed Constitutional referendum in December 2016. 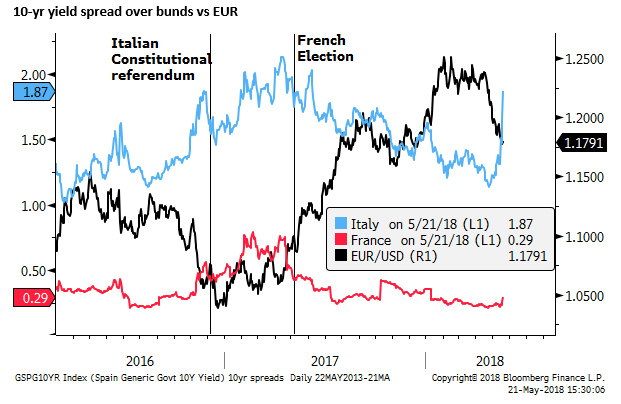 Overall Eurozone STOXX equity index has remained stable during the recent decline in Italian assets.  Weaker Italian equities have been offset by gains in French, German, Portuguese and Irish equities.  Greek and Spanish equities have weakened 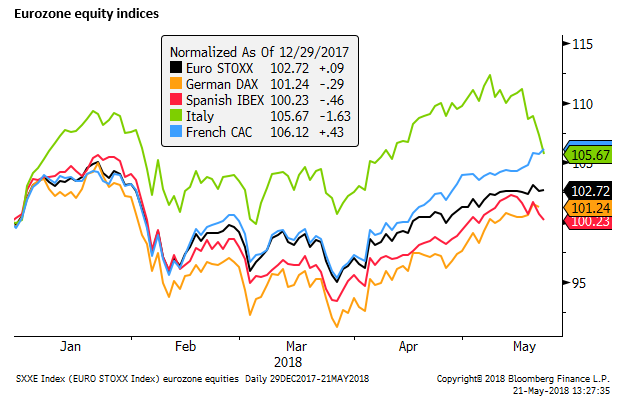 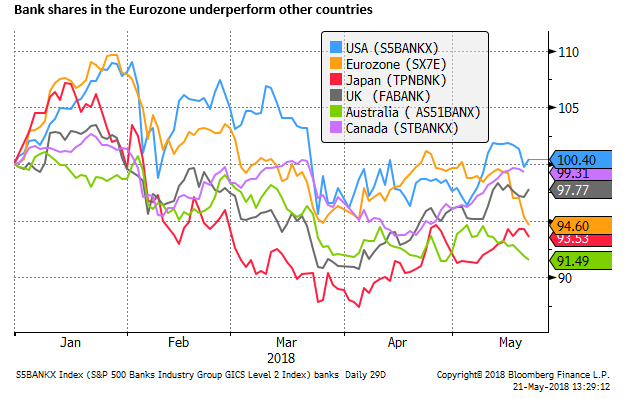 However, we should also expect a higher level of risk premium to remain in Italian assets, which feeds through to somewhat lower business confidence and less certain expectations that the ECB will exit QE from September.  As such, if there is a rebound in the EUR, it may be limited and short-lived.

Rising risk of EU – US political and trade tensions

Another issue that may dampen a quick or full recovery in the EUR is the risk of increasing tension between the US and the EU over Iran sanctions and trade.  EU companies will face sanctions from the US if they continue to do business with Iran.  And disagreement over the Iran deal may exacerbate a brewing argument over trade.

Now that the US administration has extracted some concessions from China on trade and moved negotiations onto a more extended timeline, it could turn its attention to pressuring Europe to reduce its trade surplus with the US.

The ECB has highlighted a possible trade war as a downside risk for the Eurozone economy.  Any increase in tensions between the US and the EU may be seen as undermining business confidence and delaying ECB QE exit.

Another factor to consider is the impact of higher oil prices on the EUR vs the USD.  The US economy is in a better position to benefit from higher oil prices due to its growing energy sector.  Already it seems business investment in the sector will help support overall US manufacturing.  Recent US regional manufacturing surveys have been strong.  We should expect this to play out in the Richmond Fed and Markit PMI this week.

We might also see improvement in the Eurozone PMI after its fall over the first four months of the year. As Draghi noted in his April press conference, some of the decline appears to be driven by temporary factors – cold weather, strikes, and the timing of Easter.  This may help the EUR recover in the near term. 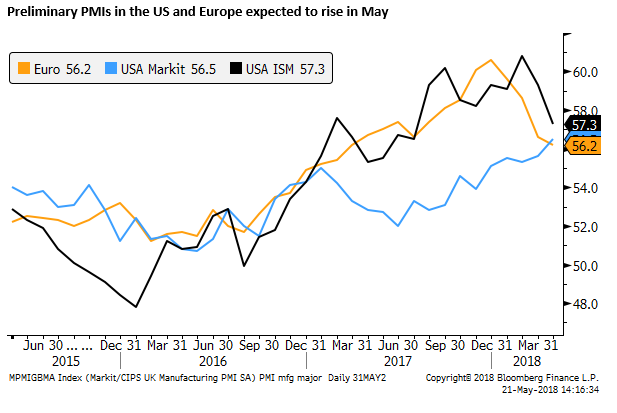 The Eurozone is increasingly dependent on oil imports and thus may see higher oil prices as a factor dampening economic confidence.  Higher oil prices will add to inflation, but the ECB is likely to view much of this impact as transitory and thus not a reason to speed up QE exit.

However, the EU’s efforts to retain trading relations with Iran may result in the use of EUR in the place of the USD to trade in oil.  At the margin, this may result in demand for EUR over the USD.

Another consideration is the fall in the TRL.  Safe haven flows from TRL may see some additional demand for EUR (more so than the USD, considering its proximity and closer economic relations between Turkey and the EU).

Overall it may be the case that investor enthusiasm for Eurozone assets, equity and bonds, may remain weaker than it was earlier in the year when the market was seeing a strong recovery, lifted by global demand.  At that time political stability in the Eurozone was not questioned, and there was little concern over trade relations with the US.  A rising EUR was considered an essential component of the return from Eurozone assets, and there was much attention on progress in ECB policy towards QE exit.

The outlook for Eurozone assets may no longer appear to be so robust.  And there are risk elements that point to a possible extension of ECB QE policy, and/or concern that an end to QE policy could unsettle assets in Italy and the periphery.

As such, we are more inclined to sell into rallies in the EUR for the time being. 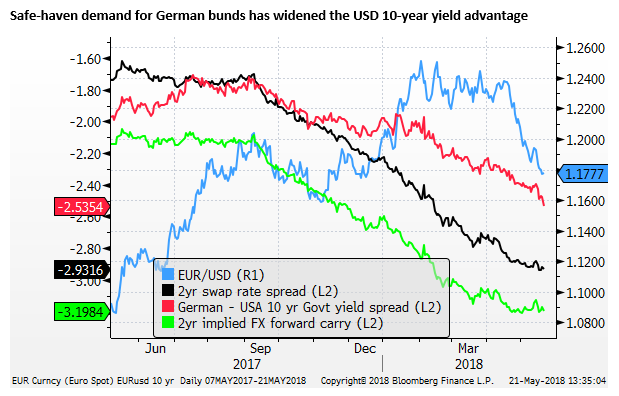 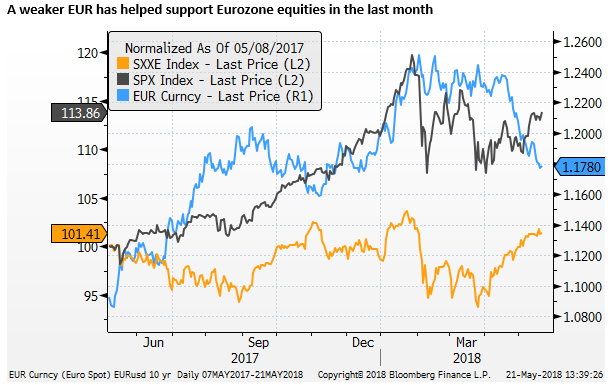 GBP more likely to rebound from its setbacks

GBP has also been relatively weak in the last month.  Firstly the GBP has fallen since mid-April as BoE rate hike expectations for May were extinguished.  The decline was in line with the weaker EUR and broad gains in the USD.

In recent days, GBP may have been dragged lower by the weaker EUR related to Italian political risk.  However, it also appears to have been undermined by some homegrown UK political risk related to an internal Tory government Brexit debate.

We sense an opportunity to buy the GBP brewing on the basis that domestic inflation pressure is building and is likely to bring BoE rate hikes back on the agenda, and home-grown political risk may fade.

Like the ECB, the BoE viewed much of its recent economic weakness as driven by temporary factors, like the Beast from the East weather storm.  If so we might start to see better than expected economic reports in the weeks ahead. Attention may turn to the retail sales on Thursday.

Already the labour data report last week showed strong employment gains in Q1 and a rise in wage growth, consistent with the record lows in unemployment. 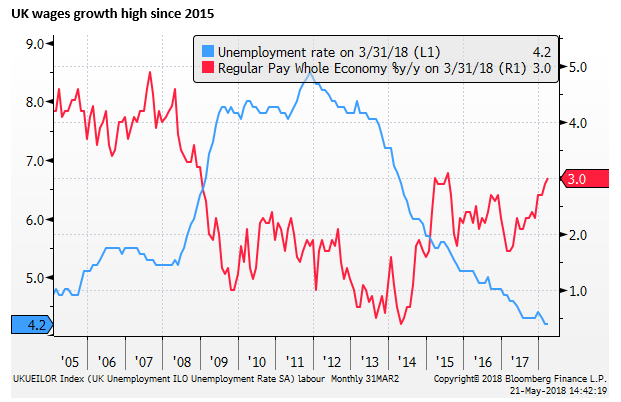 The GBP is reported to be down on Monday on snap election speculation.  As with previous news about political turmoil in the Tory government, this appears to be more hype than fact.

PM May’s government has survived since the July 2017 election, delivering so far on a Brexit ‘Divorce bill’, a transition period, and now there is debate over the Tory position regarding the thorny issue of trade relations and how it could work with the Ireland/Northern Ireland border.

The stability of the government is always in question when there are disparate views in the UK parliament.  But May represents the balanced view trying to find a working solution to Brexit with the EU Remainers to her left and the Hard Brexiters to her right.

There are no clear alternative leaders that could pull the Tories together to take on the Labour opposition. The Hardliners to her right risk losing to Labour and control of parliament if they rebel and force a split in the Tory party. In which case ,a soft Brexit or no Brexit outcome comes into play.

The more likely scenario is that Tories move forth led by May and find a way forward to negotiate a deal with the EU.  As such, any bouts of weakness in the GBP related to fear of a collapse in government are probably buying opportunities.

The GBP is still historically cheap, bearing the scars of the Brexit vote; we view it gradually clawing its way back.