The ECB has shocked the market suggesting a large further expansion of its stimulus plan including a deeper dive into negative interest rates is likely at its next meeting in December.  This will put intense pressure on the BoJ to up its policy easing measures, intensifying the focus on its policy meeting next week, at which most have anticipated no action.  EUR is sitting on three key supports and a break lower is likely after the market has spent six months, especially the last few, squaring up shorts.  USD/JPY is also threatening to break up.  China has been easing policy recently and increasing finance for infrastructure spending. The results are likely to help offset recent bearish trends in commodity assets.

EUR is testing several key supports – an uptrend from the lows in Mar/Apr that comes in around 1.1080, the lows in September around 1.1080/90, and the 50% retracement from the low to the high this year at 1.1085.  A break below this region almost feels inevitable after the shock to the market from the ECB news that will have left many scrambling to get on short EUR positions after spending much of the last six months squaring them up. 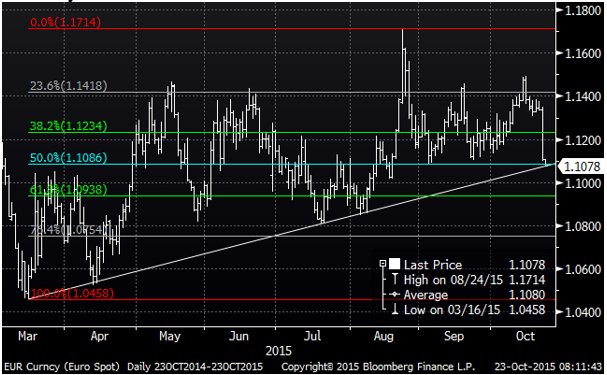 The ECB more-or-less said it plans more easing measures in December and said all measures were on the table including cutting its already negative interest rates further. There will be much written analysing what was said and what is possible, but in this fast moving market I will leave that to others for now.

The market will be thinking what does this mean for the BoJ.  The pressure will indeed be intensified on the BoJ to not be left behind.  USD/JPY is also close to a significant break up out of a narrowing stable range since the August market upheaval.

The news was generally positive for emerging market currencies that are mildly firmer than the USD in most cases since the ECB press conference.

Not that the market will have paid much attention, but the signs from the US data were also encouraging. There was weakness in the Chicago National Activity Index and leading indicators that are likely to have been dragged down by the uncertainty in global markets over recent months.  However the arguably harder and more current jobless claims data set a new long term low in the four-week moving average, existing home sales were at a high three-month average since 2007 and the Kansas City manufacturing index suggested the region is bouncing back from the energy sector slump.

The Fed will be trying hard to stay in-doors and away from the press in the wake of the ECB surprise to avoid questions on whether they still expect to hike rates later this year.