Fatigue in risk-on trades as Fed holds the line

Fed commits to low rates and QE at the current pace

Overall the Fed lived up to expectations that it would present an outlook for an unchanged commitment to existing extreme policy easing measures.

The dollar and equities moves leading up to this meeting have been relatively rapid and are exhibiting risks of being over-done in the short term.  They are starting to exhibit volatile price action, which raises the risk of a more significant correction of the recent run-up in equities and fall in the USD.

Meeting expectations, the FOMC Summary of Economic Projections, the first since December last year, projected a near-complete consensus that the Fed-Funds target would remain at zero to 25bp for the next two years to 2022 at least. Only two of 17 members had higher rates in 2022.  This is consistent with current market pricing. 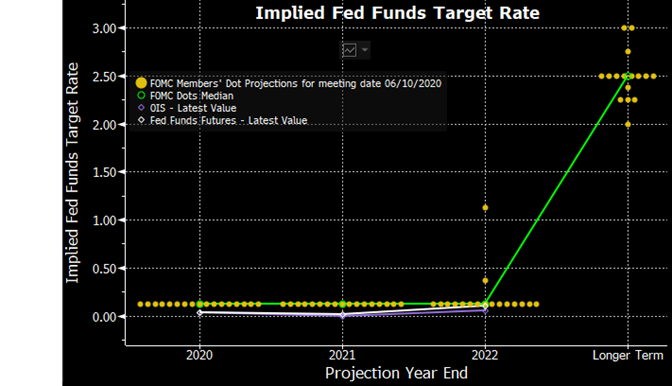 Separately the New York Fed released a statement clarifying what “the current pace” meant.  It said that it was “approximately” $80bn Treasuries per month,  $40bn Agency MBS per month, and  $250 to $500mn per week of agency CMBS.

The FOMC does not state how long this asset purchase plan will remain in place.  It says, “The Committee will closely monitor market conditions and is prepared to adjust its plans as appropriate.”  This might be regarded as somewhat less dovish than the ECB that places a minimum time frame out to mid-2021.

There was considerable discussion in the market about whether the Fed might adopt a yield curve control policy.  The announcements today appear aimed at keeping real yields down but fall short of yield curve control.  In questioning, Powell said, YCC” remains an open question”.

The Fed may adopt YCC if it thinks current policy settings lack teeth in keeping real rates low.  But at this stage, it may see the policy as creating unnecessary confusion when the current agenda is largely delivering the intended monetary conditions.