We see higher US and global yields developing.  Global equity market confidence may be returning, supported by conciliatory moves on US trade relationships with China, stability returning to the USD after a recent rebound, and a likely rebound in global economic reports in Q2.  Oil and broader commodity prices remain elevated and are indicative of higher demand.  They may further boost global inflation expectations.  Wage growth is rising more clearly in the major economies experiencing tightening labour markets.

Global equity markets have firmed over the last week and may continue to shake off the recent negativity that arose as a result of angst over threats to global trade. 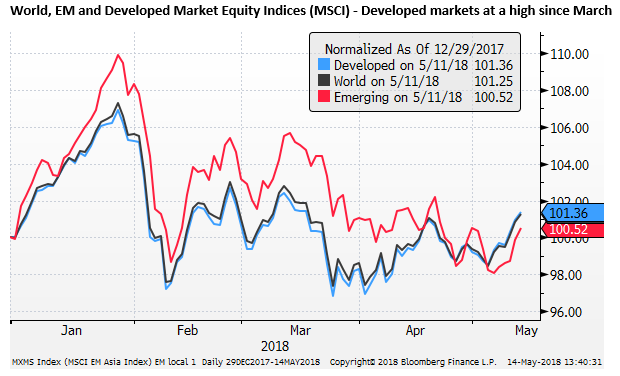 While the Trump administration is expected to keep agitating on trade relations with China and Europe, negotiations are expected to drag on. In the meantime, market nerves may ease, and investors may take solace from ongoing solid global growth momentum.

The immediate news that the Trump administration plans to remove restrictions on Chinese tech firm ZTE Corp may help buoy confidence in global equities this week.  The move raises the chances that China will pave the way for Qualcomm to acquire NXT.  And it generated speculation that China may not impose tariffs on US Soybean imports.

The market may also see potential gains to EM markets in preparation of the inclusion of mainland Chinese equities to MSCI benchmark indices on 1 June.

China’s Stock Market Is About to Burst Onto the Global Stage – Bloomberg.com

Q1 economic data in Europe and the USA are thought to have been depressed by weather disruptions.  If so, we should see improvement in indicators over coming months, helping buoy confidence in the sustainability of the global recovery.  China has also eased monetary policy to underpin growth.

The USD rebounded sharply over the last month in line with higher US rates and yields and more volatile global equity markets.  The pace of the move, after months of range trading, coming off a persistent downtrend in the last year or so, caught the market by surprise and probably contributed to the weaker trend in EM markets.  In the last week, there has been a modest retracement in recent USD gains.

If the pace of the USD appreciation slows, or it moves into a range, we might see investor confidence in global equities and EM markets recover more easily.  If capital does return to EM markets, it is likely to help curtail appreciation of the USD more broadly, and be self-reinforcing.

If equity markets are moving into a more stable, potentially stronger phase, we should see upward pressure on global yields to resume.

We see the immediate outlook for the USD harder to call, but upward movement in global bond yields are likely to be led by the USA.  And these may tend to underpin the USD.

While higher oil prices threaten to undermine consumer demand, to date there is little evidence that consumers are excessively burdened.  Gasoline demand in the US continues to move along an above average path for this time of year. 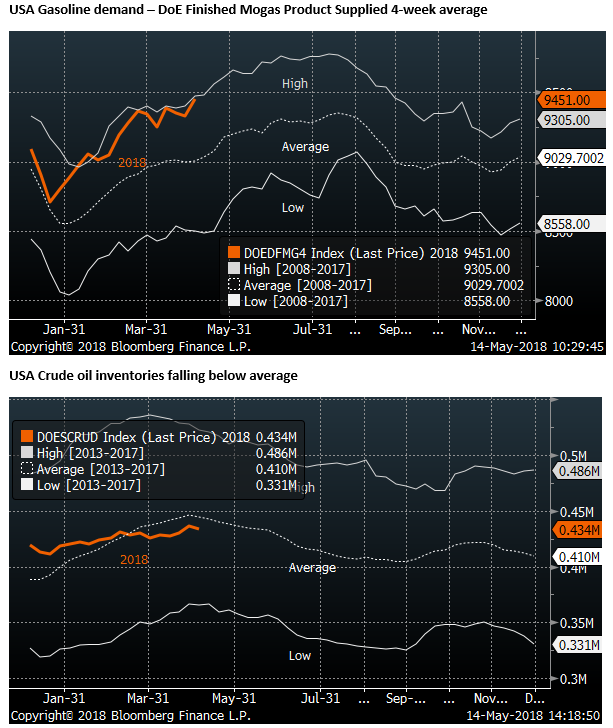 Oil prices have risen in part due to ongoing OPEC-led supply restrictions and political tension in the Middle East.  However, there is also signs of rising demand, contributing to lower inventories. More analysts are projecting higher prices.

All the reasons crude oil might go back to $100 a barrel – qz.com

The oil futures curve is moderately inverted (in backwardation), possibly indicative of expectations that the price of oil will fall from the recent more elevated levels.  However, the degree of backwardation might be considered the normal state. 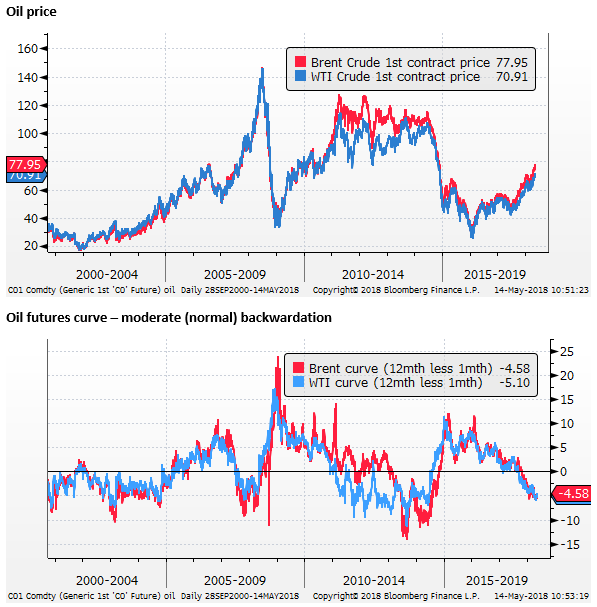 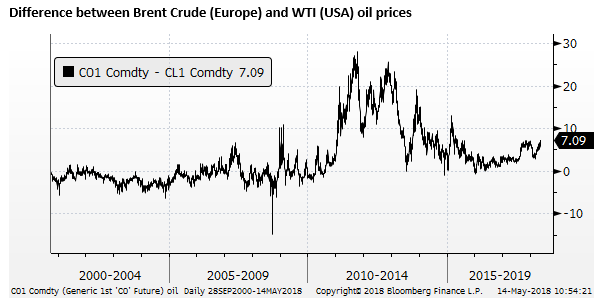 Higher oil prices are contributing to higher inflation expectations, and this may encourage a somewhat more hawkish stance from central banks, particularly if they see the rise as coming from higher demand; implying the recent price rises may be sustained. 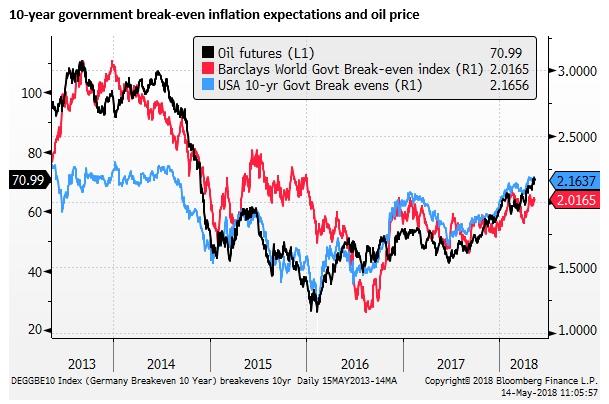 Long-term inflation expectations in the US and Eurozone between 5 and 10  years ahead are less likely to be influenced by oil prices, and have not changed much this year, as measured by inflation-linked swaps.  But Eurozone expectations have increased from their recent low in March/April. 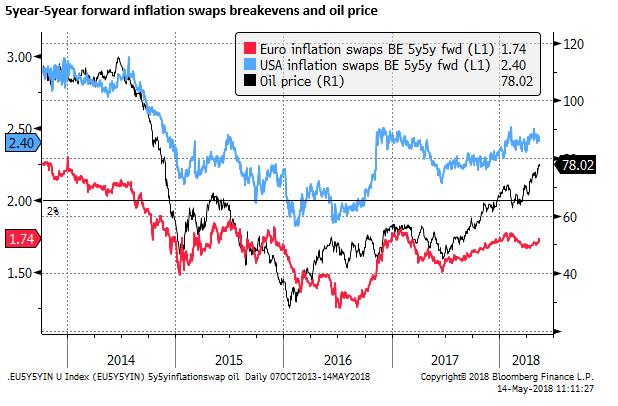 Apart from energy prices, there has also been a broader more sustained increases in other commodity prices over the last year, helping contribute to rising inflation expectations. 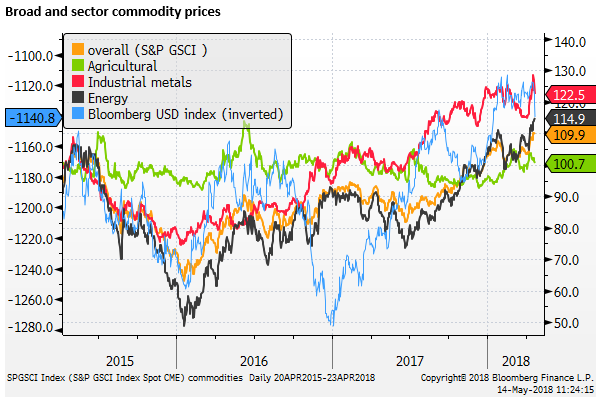 Over the last year, it appears that global bond yields have been more connected to the rise in global commodity prices. 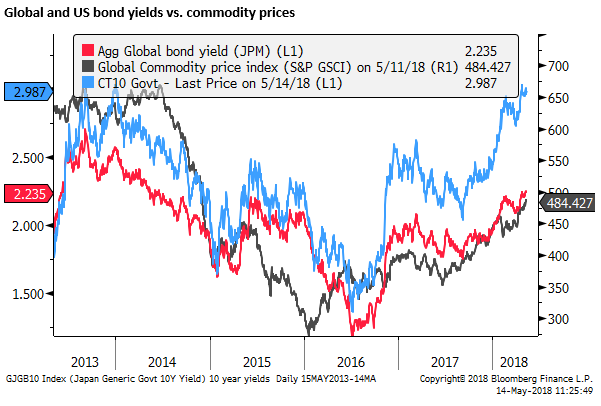 In the major economies, labour markets are tightening, and this is starting to show through in higher wages.

Wages globally have tended to underwhelm expectations, and the widespread perception is that Phillip’s Curves have flattened out.  But we might be on the cusp of acceleration in wages that surprises global investors.

One of the bigger surprises in global economic data last week was the surge in wage data in Japan. Regular time (core) earnings rose 1.3%y/y in March, a high rate since 1997.  This is consistent with the record highs in the jobs-to-applicants ratio at 1.59, and the lowest unemployment rate since 1993. 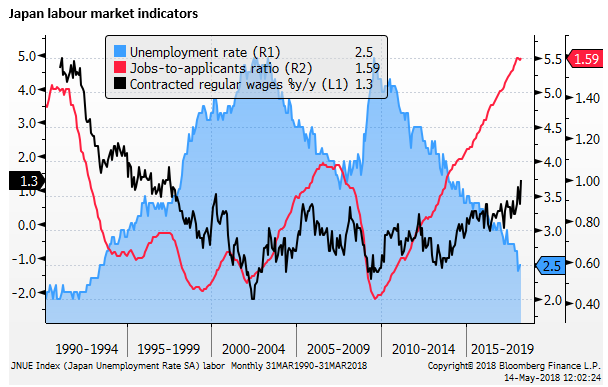 So far, the wages acceleration has had little impact on BoJ monetary policy expectations.  But this trend suggests that Japan is making genuine progress towards sustainable inflation

Attention will turn to the UK labour report on Tuesday. The unemployment rate was 4.2%, a record low in the three months to February.

The Bank of England Inflation Report, released last week, noted a number of factors that may have reduced the equilibrium unemployment rate and held down wage growth in recent years.  Nevertheless, it sees broad evidence of tightening in the labour market.  It said, “The unemployment rate is projected to fall further to 4.1% in 2018 Q2, a little below the February projection and its assumed equilibrium level [4.25%]. That is consistent with other signs that the labour market is tight. Along with the rise in vacancies, survey indicators suggest that recruitment difficulties are somewhat elevated. And, having fallen during the crisis, job-to-job flows have gradually returned to pre-crisis rates.”

While UK wage growth has been up and down in recent years in a range between 2 and 3%, it has been rising in the last year to 2.9%y/y in February for regular pay (core) wages; a high since 2015. 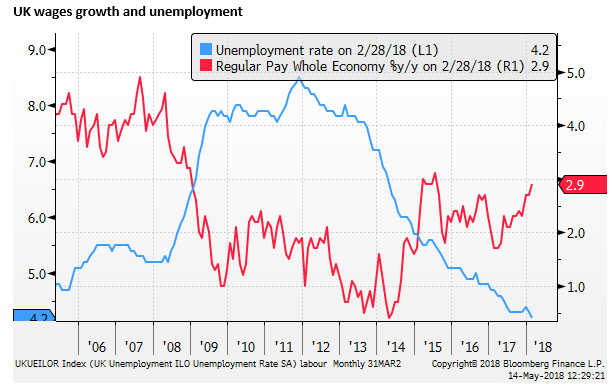 Lower than expected wages and CPI in the US in April, reported in the last two weeks, helped to hold down US yields.  However, it is notable that US yields held most of their gains over the last month. 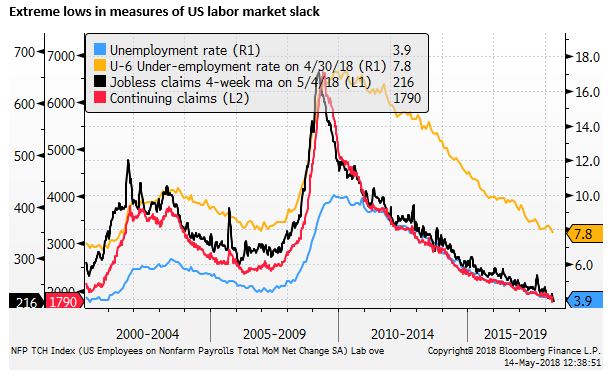 The job openings rate rose to a new record high in March since the series began in 2000; the number of job openings is now equal to the number of unemployed. The quits rate is equal to its highest level since 2001; an indicator that suggests people are willing to quit for better and potentially higher paying jobs. 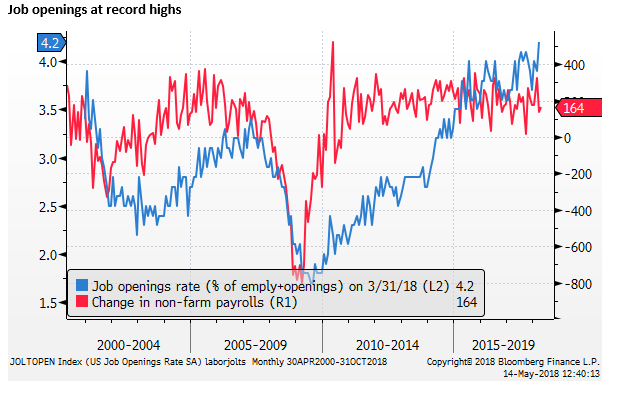 The NFIB small business survey has reported that its “Job Openings Hard to Fill” is at its high on a three-month moving average basis on record in the series that dates back to the 1970s.

Average hourly earnings have been stable around 2.6%y/y for two years, but the quarterly Employment Cost Index has risen to a high rate of 2.7%y/y in Q1 since 2008.  The risk is building for a faster pace of wage growth. 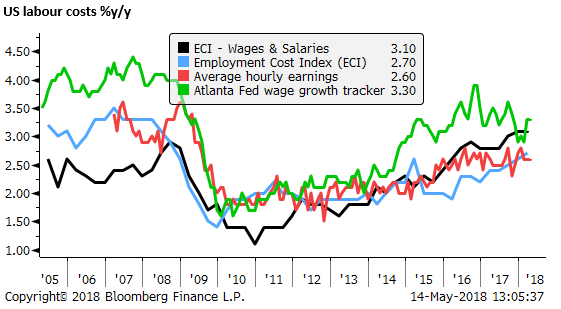 Even in the Eurozone, which might be regarded as behind the labour market cycle in than the other three major economies, wages growth is developing.  In April, the ECB said in its Account of the monetary policy meeting, 7-8 March, “Recent developments had confirmed a gradual upward trend. This increase was mainly attributable to higher contributions from wage drift, which usually reacted to cyclical developments with a shorter lag than negotiated wages. According to the March 2018 ECB staff projections, growth in compensation per employee was expected to pick up from 1.6% in 2017 to 2.7% in 2020.