High stakes Huawei gamble a weight on US and global equities

The Huawei Entity Listing appears to be a high stakes gamble by the US administration to counter the rise in Chinese economic power in an industry that is critical to the global economy.  It is evidence that the broader economic and trade dispute will be hard to resolve, and makes it harder for China and the US to resume trade negotiations.  This suggests that punitive tariffs may remain in place for much longer than expected and indeed may be expanded further.  Global trade and manufacturing activity appears to have been undermined by the trade dispute, and hopes of a recovery later in the year may continue to fade.  China is likely to retaliate; weakening the outlook for US companies.  It may also weaponise its exchange rate, allowing it to weaken further, adding to strength in the USD, dampening US equities. The market might assume that the Fed will cut rates to support the equity market, but this is unlikely until US financial conditions deteriorate further.  As such, we see a high risk of a weaker global equity market, and under-performance in EM and commodity currencies against safe havens, gold and JPY.

The Huawei ‘Entity Listing’, restricting US companies from selling their products to Huawei, and Huawei product sales in the US is widely seen as a significant escalation of the dispute between the US and China over trade and economic policy.  It raises several questions on the motivation of the US administration and increases uncertainty for the global economy.

Addition of Certain Entities to the Entity List (final rule), effective May 16, 2019. – BIS.doc.gov

The big question is: does this represent an effort by the US administration to contain the growth and influence of China in high tech industries; i.e. to contain its economic power? Is it designed specifically to hurt Huawei’s capacity to be the main global supplier of 5G network equipment, to prevent China becoming perhaps the most important economic power in what many see as the key driver of the future of the high tech industry?

The US has based the Entity Listing of Huawei on its concern that the Chinese government has and will use Huawei as a conduit for espionage.  Is this the whole reason? Or is it an excuse to contain Chinese power in key high tech industries?

Executive Order on Securing the Information and Communications Technology and Services Supply Chain; 15-May – WhiteHouse.gov

News reports, mainly from US-based media, suggest that Huawei relies heavily on a range of US chip, other hardware, and software providers for a range of its products.  As such, banning sales to Huawei, on security grounds does clear damage to these US companies, and also Chinese companies, causing steep falls in US high tech company share prices.

Google cuts off Huawei after Trump administration crackdown; 20 May – WashingtonPost.com

News reports, from Asian-based media,  suggest that Huawei is well ahead of competitors in providing equipment for 5G networks.  Ericsson and Nokia are cited as possible alternative suppliers,  but they are believed to be significantly behind Huawei in the level of technology and cost of equipment.  As such, it is not clear that US actions to curtail Huawei will succeed.

These reports suggest that European countries’ officials will continue to allow Huawei products to be used in the development of their 5G networks, and believe they can implement other measures to mitigate security concerns.

Other reports suggest that Huawei has been working on developing semiconductor chips to replace those it buys from US companies, and it has been stockpiling US chips and other parts for some time; since the US placed a ban last year for a time on Chinese company ZTE.

The effective ban on US product sales to Huawei may accelerate Huawei and other Chinese company efforts on R&D to replace and compete with US high tech products.

Huawei’s chip unit says it prepared years ago for doomsday scenario of US tech ban; 17 May – SCMP.com

Huawei does not need US chips: CEO on Trump export ban – Asia.Nikkei.com

As such, it is not clear how successful the US efforts to ban US commerce with Huawei will be in containing the company.  It may, in the end, do more harm to US companies.

It is clear that the US administration measures hurt US companies, at least in the short term.  A question is how far is the administration willing to go (hurt its own companies) in pursuit of its goals?  Does it see this as short term pain to achieve longer-term strategic advantage over China in high tech sectors?

The US government and US companies may already think that China is advancing in high tech sectors, and will soon replace or take market share from US companies.  In which case, it may sense it will lose anyway if it does not move now to seek to block the advancement of China.

If these are the motivations, then we may be moving into a long term strategic battle between the US and China in high tech industries.  This could be perceived as part of a new kind of cold war between the two superpowers.

A still worrying, but less threatening, possibility is that the US administration is using the Huawei ban as a negotiating tactic to extract a better deal from China in its trade negotiations, or greater cooperation with US efforts to contain Iran.  If so we might expect the ban to be lifted before too long.

Perhaps it is just a message to China that the US will use tough measures if it continues to compete too aggressively in the high tech sector and over-take/replace US industry.  It might be prepared to lift the ban if China offers to slow R&D in competing sectors.

However, the US has been expressing its security concerns over Huawei for a number of years and pressuring its allies to avoid business with the company. It is hard to view this latest effort to contain Huawei as a benign development with limited broader implications for economic and political relations between the two superpowers.

Deteriorating outlook for a trade deal

The market should be bracing for retaliatory action by the Chinese government against US companies selling products and services in China.  A number of major US companies such as Apple and Caterpillar are experiencing weaker share prices on fears that China will use its persuasion or direct regulatory power to damage sales by these companies in China (and elsewhere).

The Huawei action suggests that it will be harder for the US and China to resume constructive talks on a trade deal.  This suggests that punitive tariffs will remain in place, and indeed may be increased further; the US administration has said it plans to extend 25% tariffs from 200bn of Chinese goods to all Chinese imports of around $500bn per year.

There are currently no plans to continue the trade negotiations.  The delay in setting a timetable suggests there is a stalemate.

Chinese economic data significantly disappointed in April.  There are few signs of a recovery in trade and manufacturing activity in the global economy from the abrupt slowing late last year and in Q1.  The risk is that the trade dispute prolongs and further dampens global economic activity for the foreseeable future.

The US removed the steel and aluminium tariffs in Canada and Mexico, paving the way for USCMA to be passed by Congress, and eased tensions with the EU and Japan, delaying auto tariffs.  While somewhat comforting, these developments suggest that the US is more serious in dealing with the economic and geopolitical threat from China.

The US administration appears to be digging in on its battle with China and may be looking for support from its allies, or at least wary of alienating them further at this time.

There is a long and wide tail risk associated with the Huawei ban, and we need to be wary of a significant fallout to global risk assets. 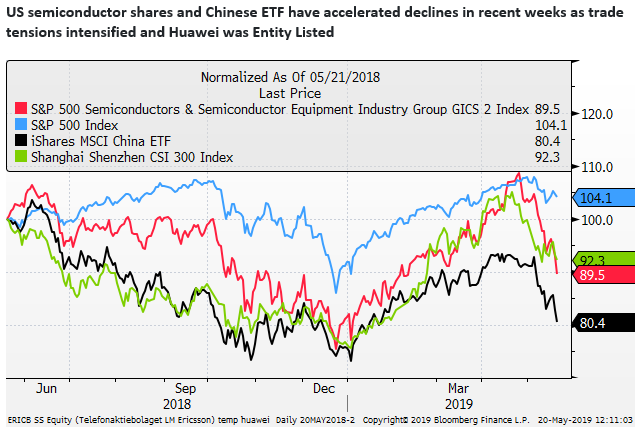 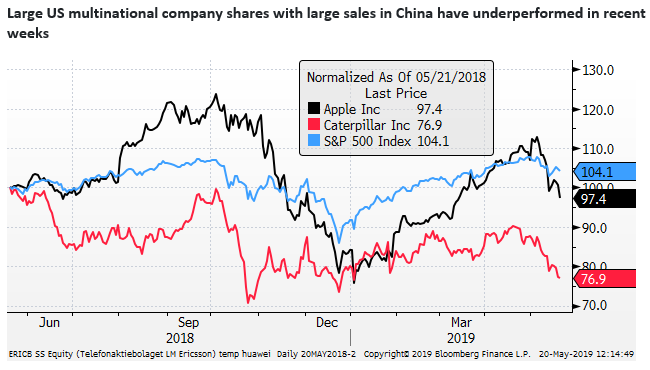 The currency impact in recent weeks of the trade dispute/Huawei action has been dominated by a weaker CNY flowing onto weaker Asian currencies.

As USD/CNY has approached previous highs near 7.0, the fall in CNY has slowed, helping slow the fallout to currencies in the region.

The USD has tended to gain broadly, but this may also reflect the deteriorating Brexit process and the conflicting political ambitions of European political parties ahead of the EU parliamentary elections on 23-26 May.

The trade dispute, in the early phases, is dampening global economic growth and generating weaker trends in riskier assets, including EM and commodity currencies, especially those with significant trade links to China.  This includes the EUR and AUD.

However, we have to be wary of the trade dispute undermining confidence in the US economy, and bringing forward rate cut expectations in the USD.  This may tend to weaken the USD at some point.  This is more likely to show-up first against JPY, CHF and gold.

The longer the USD remains resilient, and tends to rise against its key trading partners, the more downward pressure should develop on US equities, and contribute to global risk aversion.

We see a high risk that USD/CNY continues to rise as the Chinese economy shows signs of weakness and the trade dispute undermines economic confidence.  The Chinese government would be wary of letting the CNY fall so fast that it generates capital outflow and significantly tightens domestic credit conditions.  However, a weaker exchange rate would help ease monetary conditions and be seen as retaliation towards the USA.

The INR and AUD bounced on election results that provide specific reasons for these currencies to strengthen.  But they will not be immune from a weaker CNY and weaker Chinese economy.

While our reports are focused on identifying opportunities in FX markets, at this time, we see most signals pointing to the risk of a weaker US equity market.  At least until the fall in riskier assets is seen as sufficient to move the Fed to cut rates.  However, financial conditions remain relatively benign in the USA at this time, and the Fed is unlikely to respond until there is clearer evidence that the trade dispute is damaging the US economy. 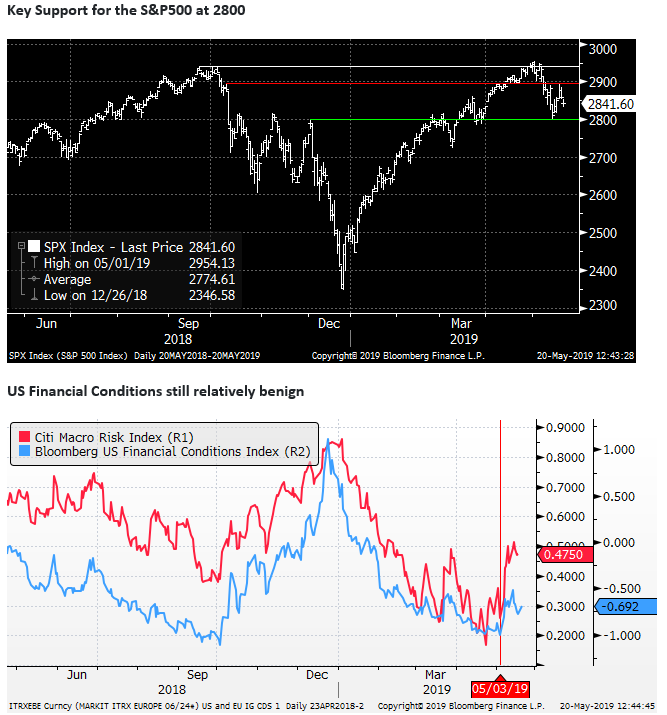