Italian leaders pose a new threat to the EUR

The EUR has been undermined in recent days by political risk in Italy.  The untested young leaders of anti-establishment populist parties in coalition talks to govern Italy have argued for freedoms from the rules of Eurozone monetary union.  Italian bond yields rose 16bp on Wednesday, with some contagion to other periphery government bond markets and European bank stocks.  The EUR has lost ground against a range of other currencies and may continue to languish should Italy’s new leaders propose significant new deficit spending that appears to flout the EU Growth and Stability Pact.

Political risk in Italy has added to downside pressure on the EUR this week.  The market has been largely viewing political news in Italy as a sideshow and ignoring it until now.  It had seemed that the economic and financial recovery in the Eurozone was advanced and more resilient to political developments in the region.

Italy has been dealing with political instability of varying degree for some time.  The recent phase of instability started to build after the failed constitutional referendum in December 2016, resulting in the resignation of the Italian PM and centre-left Democratic Party leader Renzi.

The latest election in March this year has sidelined the Democratic Party. The anti-establishment populist and leftist Five Star Movement and far-right Lega are in negotiations to form a ruling coalition; now two months after the election delivered a highly divided parliament. (Italian general election, 2018). The new young Italian leaders are Luigi Di Maio (M5S) and Matteo Salvini (Lega).

The previously stated policies of these parties in opposition were alarming and largely incongruous with the rules of Eurozone membership.  But the market had paid little attention to the risk of radical policy direction, hoping that, in government, policies would be toned down for the sake of maintaining EUR membership.

However, the details starting to emerge from the coalition talks suggest that the new government will challenge EU rules by vastly expanding fiscal deficit spending.  If so they may face threats from the ECB that Italy will be excluded from its QE Asset Purchase Program, and sanctions from the EU.

The Huffington Post in Italy published a draft version of a coalition policy agreement on Tuesday in which the two parties sought, “specific technical procedures” to allow countries to leave the euro and recover their “Monetary Sovereignty” (Source: League/Five Star want return to ‘pre-Maastricht’ era – FT.com).

The two parties later said this was an earlier draft and they had removed provisions that would question Italy’s membership of the euro.

They also denied that they would request the ECB to cancel the Italian debt it holds as part of its Asset Purchase Plan.

They clarified that they would request that debt held by the ECB not be included in the measurement of national debt. This might help them gain more leeway to expand fiscal spending. Either way, it is hard to see this idea flying.

The parties released a statement that calls for a rewrite of the rules that were set to support a stable monetary union.  They said, “The structure of European economic governance, based on the dominance of the market, and the respect for rules that are stringent and unfounded from a social and economic point of view, requires a rethink with our European partners,”  And, “The spirit must be to return to the pre-Maastricht setting in which European states were moved by genuine intents of peace, brotherhood, co-operation and solidarity.” (Source: League/Five Star want return to ‘pre-Maastricht’ era – FT.com).

The Maastricht Treaty signed in 1992 sets fiscal and economic rules for EU members designed to allow convergence in their economies necessary for a stable monetary union.

Part of the motivation of the new evolving Italian government coalition is to pursue significant fiscal expansion through income tax cuts, a universal minimum income, and reversing VAT increases and pension reforms.  The policies are estimated to blow the Italian budget deficit out by over 4ppt of GDP to 5.5%, according to Oxford Economics (Source: Is the euro’s Italian ‘nightmare’ about to come true? – FT.com).

The IMF Fiscal Monitor reported that Italy’s primary balance (before interest payments on outstanding debt) was in a surplus of 1.7% in 2017, rising to 1.9% in 2018.  The improving trend helping support Italian financial stability, at least until now.

It remains to be seen how far a new Italian government might increase public spending.  Some additional fiscal spending might be considered a positive for growth.  But given the size of its existing debt, the EU is likely to provide limited scope for Italy to expand spending under its Stability and Growth Pact (SGP).

The immediate concern may be that the market begins to build in a risk that Italy loses its support from ECB QE and faces sanctions from the EU.  This could cause Italian asset markets to weaken and undermine economic confidence in Italy.

This might be seen as delaying broader recovery in the Eurozone.  To the extent that it generates some contagion to other periphery debt markets it might lead to expectations that the ECB will extend its QE program for longer (beyond the current end date of September).

Given the proclivity of the Italian leaders to be free of the rules of Euro membership, the market may wonder if they might consider more radical action to expand deficit spending if it faces weaker Italian asset prices that threaten economic growth; such as threatening to introduce an alternative national currency.

The market reaction on Wednesday was relatively severe in the context of recent months.  However, it is much less severe than the era before the ECB’s Asset Purchase Plan compressed risk spreads in the Eurozone. 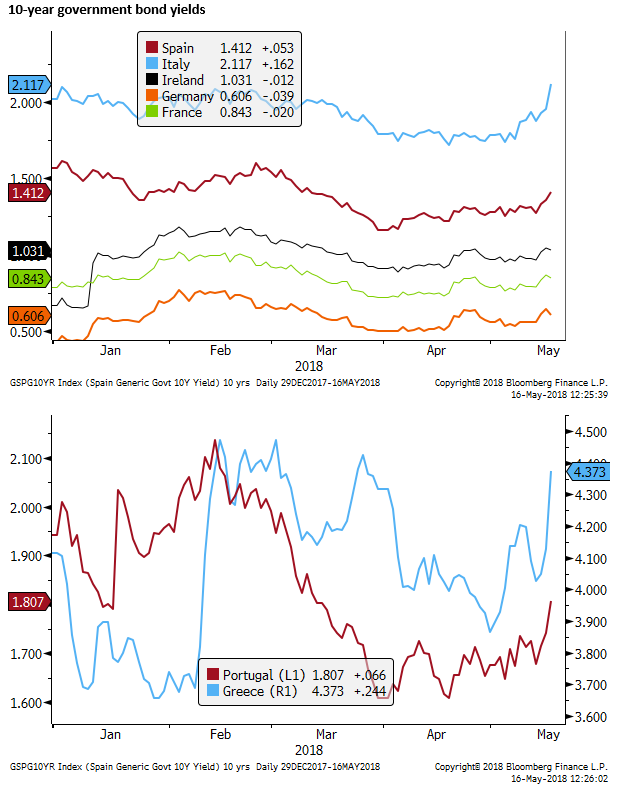 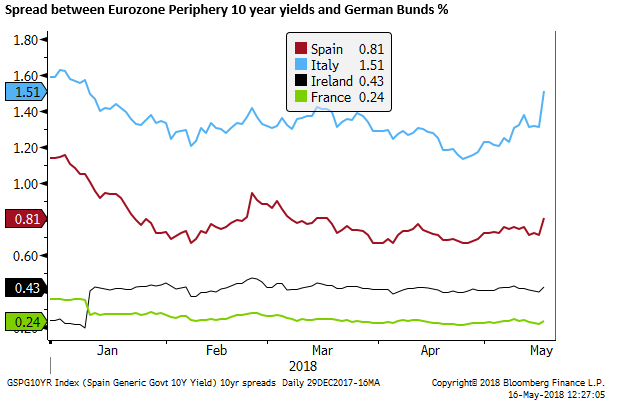 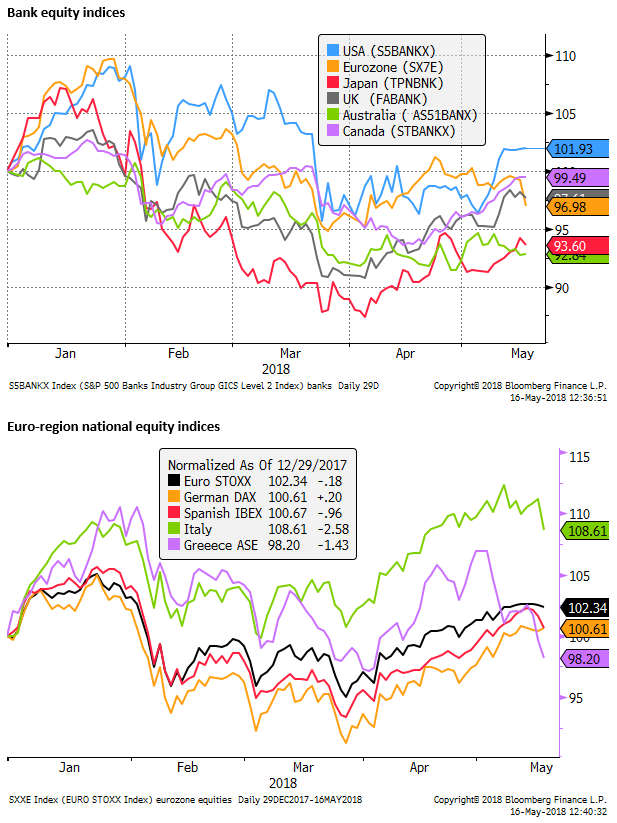 While the EUR/USD was weaker on Wednesday, it has recovered from its lows, and there has been little evidence of contagion to global markets.  Emerging market assets rebounded from losses on Tuesday, despite news that the US-North Korea summit may be derailed. US Yields continued to creep higher, notwithstanding lower Bund yields.

EM markets may be taking some support from signs that the US is taking a more conciliatory tone concerning trade negotiations with China; including news that hardliner Administration Trade official Navarro will not take part in negotiations with the Chinese Vice Premier Liu He, in the USA this week for talks with US counterparts.

The scope for contagion to global investor confidence appears to have been significantly lessened by the ongoing support from the ECB for Eurozone assets.

The Italian developments have placed more noticeable pressure on the EUR exchange rate, seeing it weaken noticeably against the CHF in the last two days.  It has fallen more significantly on Wednesday against a range of EM and commodity currencies. 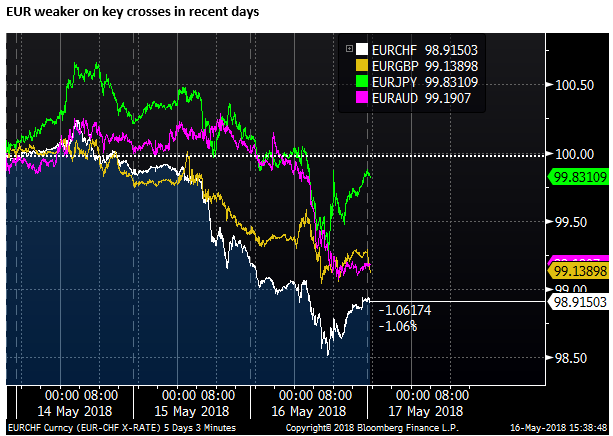