Today the RBA releases its latest policy meeting statement.  This is followed by a speech by RBA Governor Lowe on Wednesday, and the release of the RBA quarterly Statement on Monetary Policy (SoMP) on Friday, where it updates its medium-term forecasts.

A lot has changed

A lot has changed in the last two months since the previous RBA policy meeting on 4-Dec, and its previous SoMP on 8-Nov.  This is an important juncture for the RBA to set policy guidance after a tumultuous end to last year.

At the time of its last policy meeting, the RBA had not yet received the much weaker than expected Q3 GDP report ( 5-Dec), replete with downward revisions to previous quarters, shifting the message from an accelerating GDP and above-trend growth (3.4 %y/y in Q2), to below-trend growth (2.8%y/y in Q3), down from its peak.

As such, in the Dec policy statement, the RBA was still looking for GDP growth to “average around 3.5%” over 2018 and 2019, as projected on the 8-Nov SoMP. The RBA will surely need to revise down its projections for GDP growth given the weaker starting point.

Furthermore, most activity indicators have weakened in recent months.  Some of this may reflect a weaker global trend in activity and financial market volatility dampening sentiment.  As such the RBA may see scope for sentiment and activity to recover from a global weak patch towards the end of last year.  However, there are also increased local risks to the economic outlook from an acceleration in the slide in residential building approvals and house prices.

At the time of the RBA policy meetings late last year, the RBA retained a relatively upbeat view of the global economy.  Volatility in US equities had started around October, but was still fresh at the time of the RBA meetings.  The Fed had only recently lifted its rate hike projections for 2019 to a new peak (24-Sep), sending US rates and yields to their peak in early November.  In its 8-Nov SoMP, the RBA acknowledged risks to the global economy arising from the trade dispute,  but it continued to say “Global economic conditions remain robust.”

The global economy, led by China and Europe, appears to have decelerated rather abruptly in Q4, much more than expected.  The RBA will probably note stimulus policy enacted by China, a pause in Fed rate hikes, and hopes of a trade deal as factors that may support the global growth outlook. But the weaker starting point and surprising weakness in Q4, extending into sentiment indicators in January, significantly downshifts the global outlook from where it stood in the 8-Nov or 4-Dec policy meetings.

The fact that a number of central banks have sounded more dovish in recent meetings (including the Fed and ECB), suggests that the RBA may join the trend.

More positively for the outlook, the RBA commodity price index (monthly average data) rose to a high in January since 2012 in AUD-terms, reflecting a combination of a weaker AUD exchange rate and firmer commodity prices in USD-terms. This should generate a higher outlook for mining sector income growth.

Over the last year, the RBA policy meeting statement has offered little policy guidance other than a stable rates outlook.  It has said, “the Board judged that holding the stance of monetary policy unchanged at this meeting would be consistent with sustainable growth in the economy and achieving the inflation target over time.”

While the tone of the statement might suggest less confidence in the outlook, the RBA is likely, in our view, and it seems the market’s view, to retain this same final policy guidance.

However, there is a significant risk that the RBA signals a willingness to consider cutting rates at coming meetings.  If so, it might add a modifier like holding rates steady is appropriate “for the time being.” This would be a significant dovish surprise.

There is a significant risk that the RBA removes this reference to the next move in rates.  In fact, the market may be little surprised if it does.  Nevertheless, if Lowe refuses to repeat that the next move in rates is likely to be higher, it will be a significant break from RBA messaging over the last year; it would generate further speculation that the RBA may cut rates later this year, and weaken the AUD exchange rate somewhat.

Business activity and confidence indicators have deteriorated, and may no longer be described as above average. 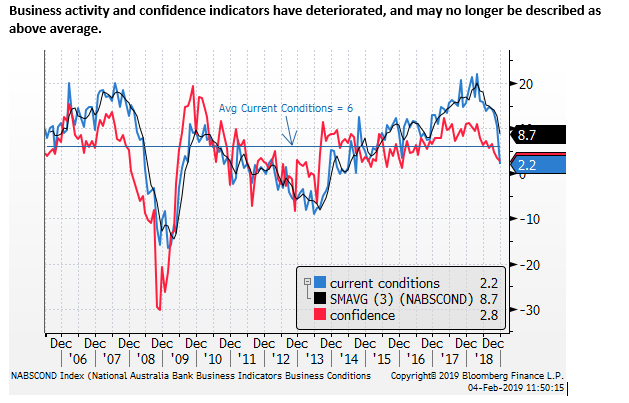 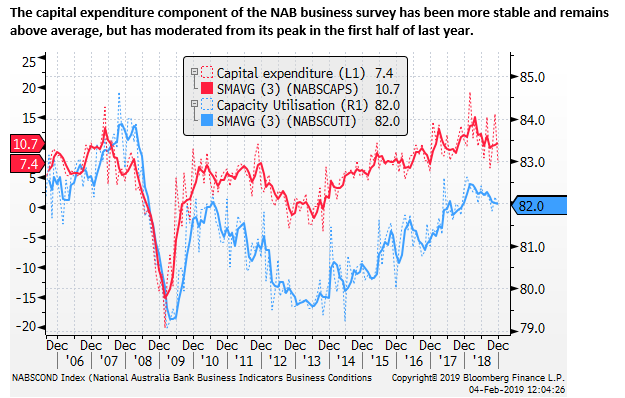 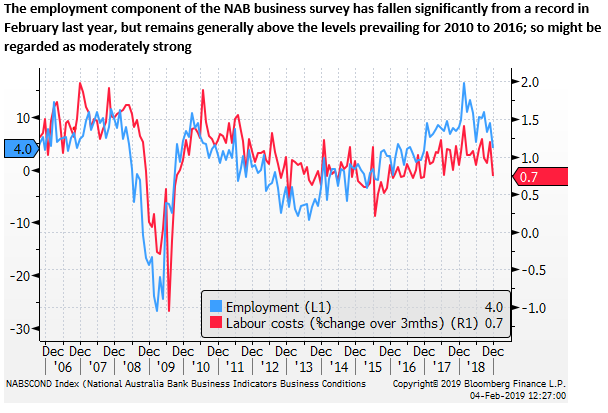 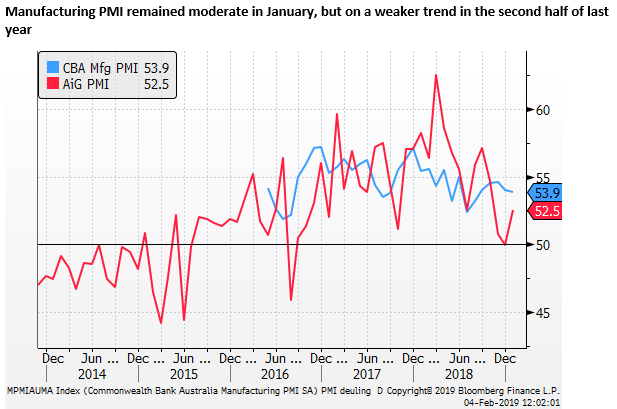 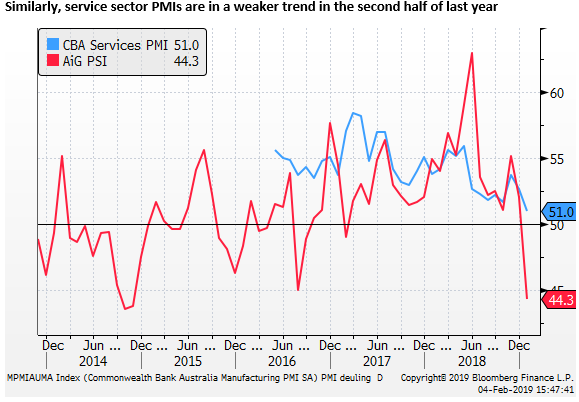 The construction sector PMI by AiG has fallen sharply since mid-year, painting a weaker picture than the upbeat views expressed by the RBA in recent statements; where non-residential and infrastructure construction activity was supporting activity. However, this series does not appear to be highly-regarded by the RBA. 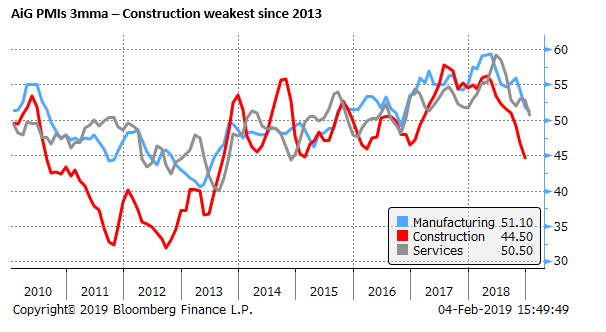 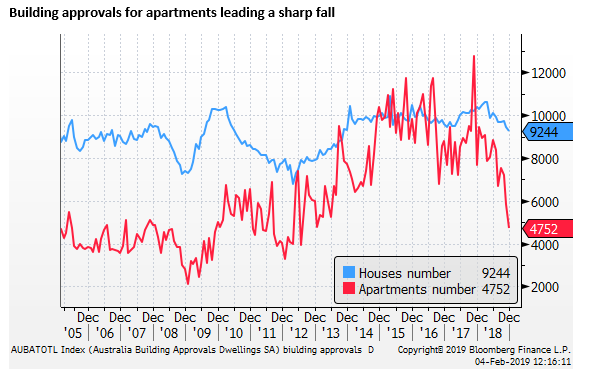 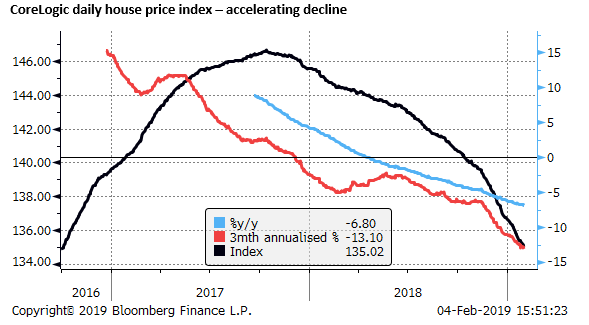 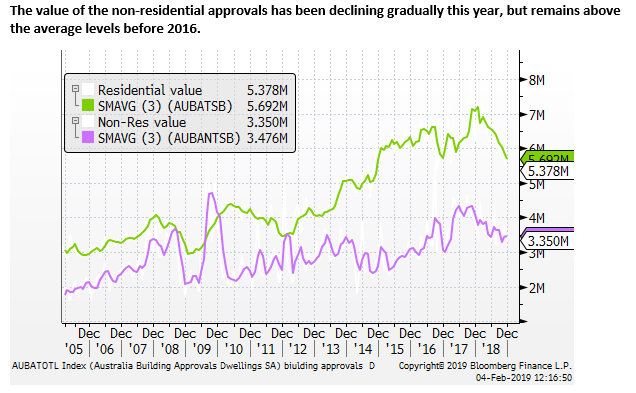 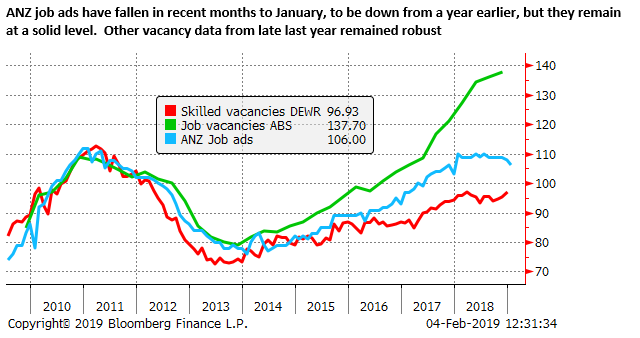 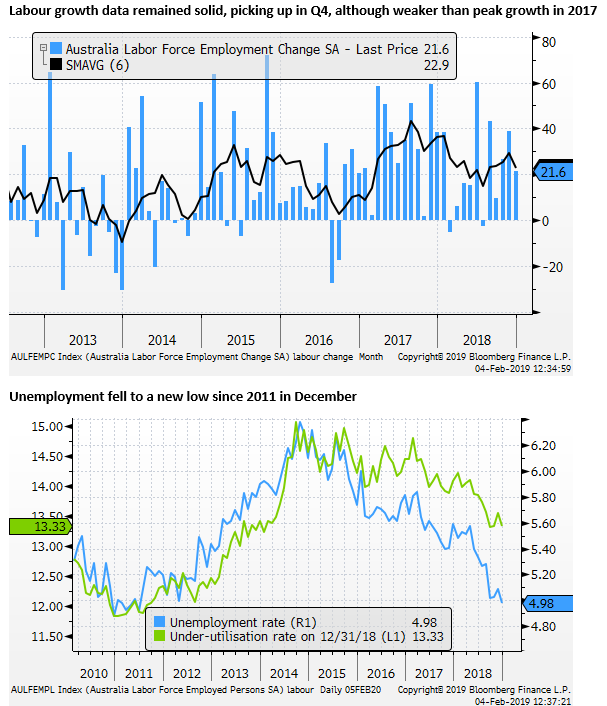 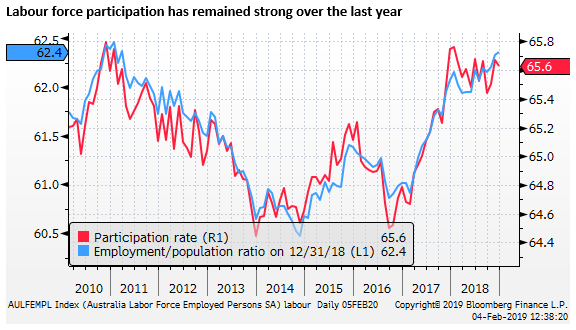 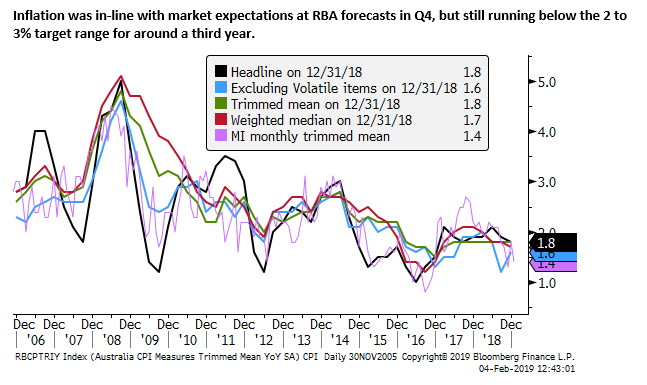 Some tightening in credit conditions

The Hayne Royal Commission final report released on Monday is not expected to further significantly tighten bank lending conditions. It does call for substantial cuts to established commission payments to mortgage brokers, which could throw some sand in the wheels in the way prospective mortgagees acquire finance, but the RBA and most analysts seem likely to view lending conditions to be stabilizing after tightening over the last year.

Australian bank funding costs have lifted since November to revisit around their highs reached in the middle of 2018.  At the margin, this may be seen as tightening credit conditions somewhat.  One of the major banks (NAB) did raise its mortgage rates by around 15bp in late-January, following the moves of other banks in September, reflecting the higher bank funding costs. 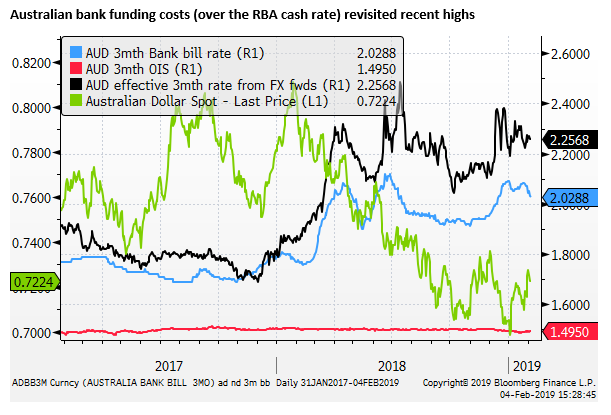 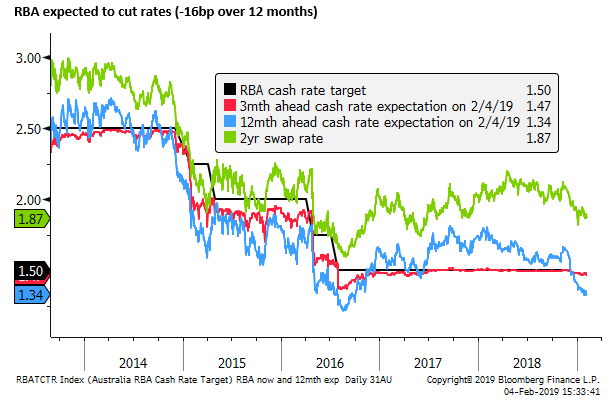 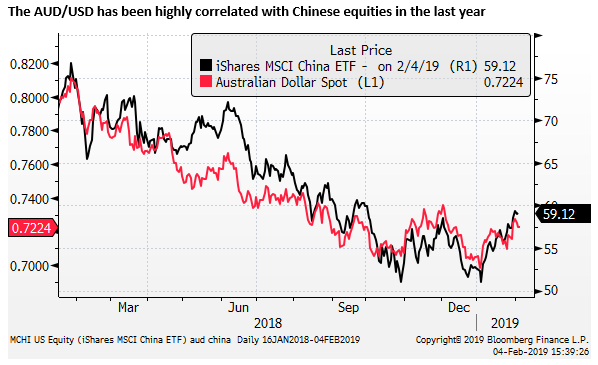