New Zealand rates plunged and the NZD dropped relatively sharply after the RBNZ said the next move in rates was more likely to be a cut.  The RBNZ appeared to be significantly influenced by the policy easing abroad and upward pressure on the NZD.

The RBA shifted from a mild tightening bias to a neutral bias in February.  Since then it should be much less sure that current policy settings will return inflation to its target.  We expect them also to acknowledge that the balance of risks to their forecasts have shifted to the downside.

The NZD and the NZ rates market responded aggressively to a shift in the RBNZ guidance from neutral to an easing bias. 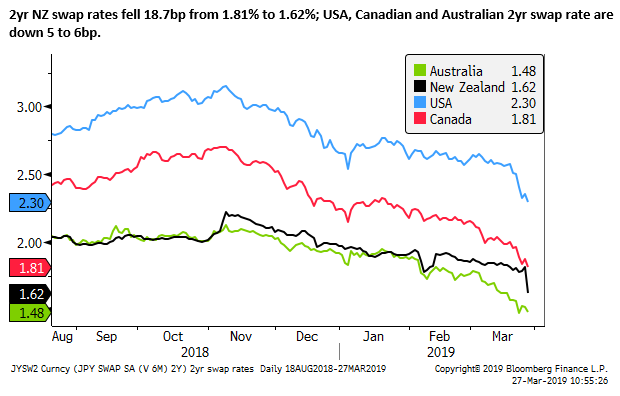 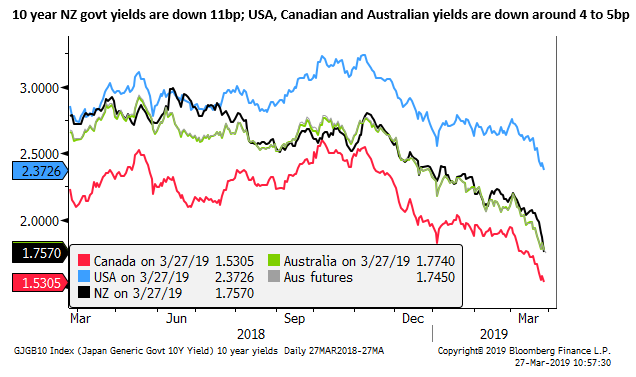 The NZ rates market moved from pricing in a 6% probability of a rate cut at the next policy meeting on 8 May to a 35% probability.  And has almost priced in 25bp of rate cuts by the 7 August RBNZ policy meeting. 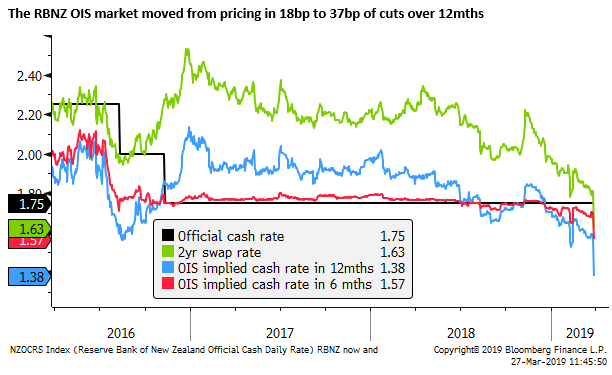 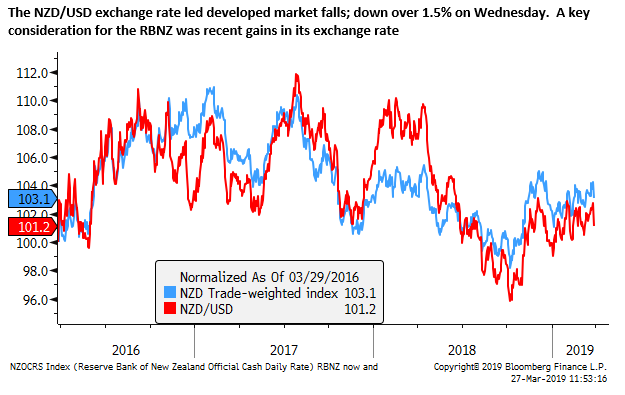 The RBNZ said on 27 March that, “Given the weaker global economic outlook and reduced momentum in domestic spending, the more likely direction of our next OCR move is down.”

A key consideration for the RBNZ was that the easier monetary policy stances by key trading partner central banks were “placing upward pressure on the New Zealand dollar”.

The RBNZ stated that the balance of risks to their outlook for inflation to rise towards its target had “shifted to the downside” (hence the easing bias).

However, it continued to conclude that, “We will keep the OCR at an expansionary level for a considerable period to contribute to maximising sustainable employment, and maintaining low and stable inflation.”

In previous statements, this appeared to convey a long period of stable rates.  But, now combined with an easing bias,  it does not preclude the possibility that rates are cut at any time.  It may suggest that the RBNZ is not in a big hurry to cut rates, but we presume the hurdle to a cut is relatively low.

The relatively new RBNZ Governor Orr is proving to be a flexible central banker, willing to adjust to developments swiftly, and appears to be making a more concerted effort to address the long-running undershoot of the 2% target than his predecessor.

The RBNZ is going through a transition to introducing a monetary policy committee, where Orr will move from being solely responsible for policy decisions to be the chair of a seven-person MPC, with three external members, by the time of the next policy meeting on 8 May.  He is arguably making his mark early to command more respect and control over the MPC.

The RBNZ explicitly stated that it has responded to easier monetary policy stances abroad; in particular “key trading partners including Australia, Europe, and China”.  This raises the stakes somewhat for the RBA policy meeting on 2 April.

RBA may now face up to a shift in risks

The RBA moved from a mild tightening bias to a neutral bias in early February.

It did not reveal as much in its 5 February policy statement; it retained its message that progress towards reaching its inflation target was “expected”, but “likely to be gradual”, continuing to say nothing that might hint of a change in rates in coming meetings.

Until February, over the last year or so, the RBA preferred to relay a mild bias to hike in its policy minutes and quarterly Statement on Monetary Policy (SMP), saying that that there was “no strong case for a near-term adjustment in monetary policy”, but that “the next move in the cash rate was more likely to be an increase than a decrease”.

However, in February, the day after the policy meeting, RBA Governor Lowe, in a speech, ditched this well-worn guidance saying instead “The probabilities appear to be more evenly balanced.”

This new neutral bias was conveyed in the SMP later that week on 8 February, and in the subsequent policy meeting minutes.

The RBA has chosen to give little guidance in its actual policy statements, probably because its tightening bias had been quite mild, something they expected they might exercise in a relatively distant and uncertain future, and since February there was no bias.

As a rule, the RBA tends to give minimal policy guidance in their policy statement unless it expects to move rates within a few months.

In the previous policy statement on 5 March, the RBA retained the “likely”, but “gradual” return to target, again saying nothing about the future direction of rates.  Its subsequent policy minutes confirmed the neutral bias.

As such, any shift in tone in the 2 April policy statement will be a significant surprise; it would suggest that the RBA can see a high probability that it may cut rates within a few months.

A key question RBA staff might ask themselves is: can they continue to say there is likely to be a gradual return to its inflation target centred at 2.5%? If not they may need to remove this assertion from their policy statement.  In its place, the RBA might note, as the RBNZ did, that the balance of risks to their outlook has shifted to the downside.

The RBA is unlikely to explicitly say, at least in its policy statement, that the next move in rates is more likely to be a cut, but the market will presume as much if the RBA notes that the balance of risks has changed.

We think that there is a good chance that the RBA makes such a shift in tone in its policy statement next week, and this will be meant to convey some guidance that rate cuts are on the table.

There is some room for Australian rates and the AUD to slip further in this event, although not as much as exhibited in New Zealand this week. 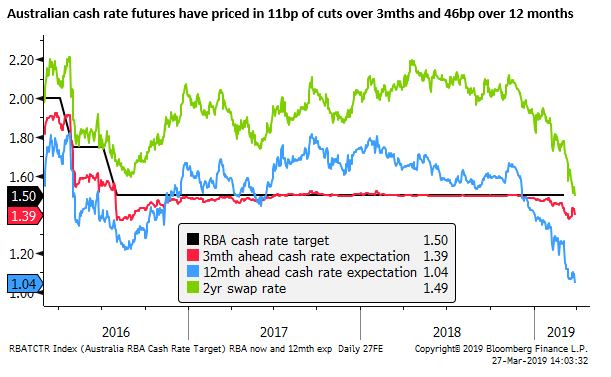 Rate cut expectations in Australia did ease back a bit after the labour data released last week, with unemployment falling to a new cyclical low of 4.9%.

However, a number of other survey and economic reports suggest that confidence and momentum in the economy have declined since last year, and the RBA may be more willing to acknowledge the increased risks to the global economy that have motivated actual policy or guidance easing by several other countries’ central banks.

The political cycle is now in focus with the national government set to announce its annual budget on 2 April, the same day as the RBA policy meeting.  And it is expected to follow within a week or two by calling a national election in May.

With the help of strong resource sector profits over the last year, the government budget position is in relative health.  The government is expected to announce significant spending increases and potential tax cuts and/or other social payments to aid their, albeit slim, chance of retaining power.

The prospect of fiscal stimulus might be a reason for the RBA to delay messaging rate cuts.  However, it probably should not preclude them from at least acknowledging that the risks of a cut have become material in their statement next week.