Recent news reports suggest that the Trump administration may be looking to cool its trade rhetoric towards Europe and NAFTA, while trade tensions with China remain high and may increase further.  European automaker share prices recovered significantly from beaten-down levels, while the Chinese share market and Asian equities more generally remain relatively weak.  This may tend to support the EUR and CAD while keeping Asian currencies under pressure.  The Bank of Canada appears set to proceed with its fourth hike this cycle next week and its labor report on Friday should remain upbeat.

Trump offering a deal with the EU

We may be seeing a switch in tactics by the Trump administration from pressuring trade partners on several fronts to concentrating its efforts against China.

This would make more sense for the US administration, lessening the potential fallout to the US economy. Trump has more supporters in Congress in pursuing tougher trade policy against China, and this might be viewed as a safer tactic going into the November mid-term elections.

The auto industry in the US has expressed its alarm at trade war with the Eurozone, and clearly European automakers would not like to face higher tariffs on their exports to the USA.

The US Administration has claimed that the existing 10% EU tariffs on US car imports is unfair, and their ultimate goal is to reduce auto tariffs.  If they could negotiate a cut in tariffs on auto trade with the EU this would be claimed as a political win by Trump.

The EU imposed a 31% tariff on Harley Davidson motorcycle imports (raised from 6%) and a range of other US goods imports worth $3.2bn in retaliation for the US’s 25% tariff on Steel and 10% tariff on aluminum imports.

Trump has threatened to impose a 20% tariff on car imports and his administration has opened a study into whether such tariffs can be justified on national security grounds; the same as that used to justify steel and aluminum tariffs.

The FT reports that Germany’s big three automakers met with the US ambassador to Germany, Grenell, on Wednesday to reaffirm their support for zero tariffs on EU-US trade in cars.  The German auto execs said that they would pledge to maintain levels of investment in the US, provided a tariff spiral was averted.

German news service Handelsblatt reported that US Ambassador Grenell invited the German car makers to a meeting to convey a proposal from President Trump; the “elimination of all tariffs on automobile imports on both sides and removal of non-tariff barriers, such as regulations on the size of rear mirrors.” 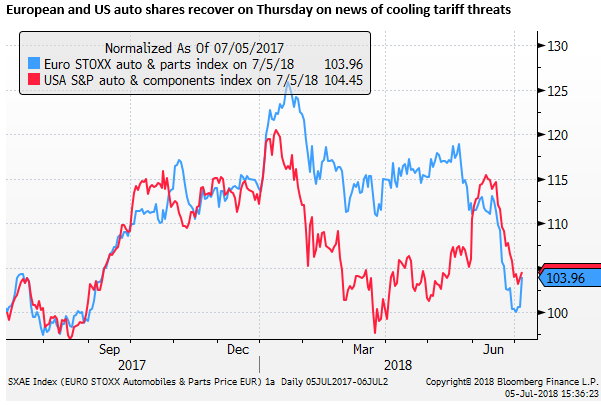 On the other hand, there does not appear to be obvious quick wins in the trade dealings with China, and the US is set to push ahead with its first round of tariffs on Friday (25% tariffs on $34bn of Chinese goods).  China is expected to retaliate, including by imposing a 25% tariff on a range of US goods including US soybean, chicken, pork, beef, and electric and sport utility vehicles.

Trump is awaiting public comment on a further $16bn of Chinese goods before imposing tariffs, and has requested his trade reps to identify a further $200bn in goods that might be used to escalate the trade war if China retaliates against the first round on goods (worth $34bn to $50bn), something China has already said it would.

US-China tariffs: What’s behind them, who stands to be hurt? – WashingtonPost.com

The tension between the US and China appears to be increasing with the two sides moving beyond tariffs to business dealings of major high tech companies in each other countries.

The USA National Telecommunications and Information Administration (NTIA), an agency under the US Department of Commerce, said China Mobile posed a security risk in its recommendation that the Federal Communications Commission (FCC) deny the Hong Kong-listed network operator’s application to build its own infrastructure and provide consumer and corporate telecommunications services in the US. (Source: South China Morning Post).

The USA will claim this has nothing to do with its dispute with China over protection of its high tech sector, but it is hard to disentangle these actions from the broader trade restrictions and increased scrutiny on Chinese investment into US companies.

Why the US government sees China Mobile as a national security threat; 4 July – SCMP.com

US semiconductor chip maker Micron Technology received a court order in China to stop selling certain products as part of a ruling in a patent infringement case brought by a Taiwanese chipmaker.

Again this is not necessarily related to the trade and investment dispute, but it may reflect a weakening in relations and point to ongoing sparring over the high tech industry. 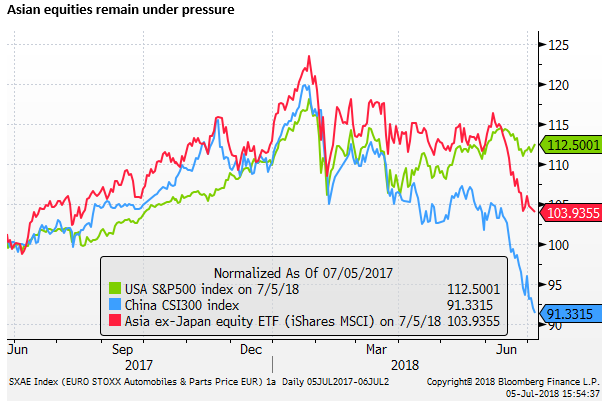 The Mooch suggests Trump may shift tactics on Europe and NAFTA

Former White House Communications Director Anthony Scaramucci gave an interview on Bloomberg TV on Thursday where he suggested it would be beneficial for the US economy and tactically for the Republican party going into the mid-term elections if the US administration toned down its rhetoric on trade issues.

He said that, “he was hoping that under the surface there’s hardcore negotiations going on right now, and hopefully there will be an announcement in 48 or 72 hours that we are going to abate a potential trade war slash battle.”

Scaramucci said he was writing a piece on this right now, “that the President would be well served to go to our traditional allies that have the same problem with China …  The combined forces of the EU and the US… that would be a better tactic.  Another tactic would be to resolve the NAFTA situation.  I think the President is close on NAFTA.  He expressed a reluctancy last week to sign a new NAFTA deal, but he is there, I think they could bridge that impasse; signing a NAFTA deal would strengthen the stock market, it would fortify our closest neighbours, it would calm down that system and that rhetoric, and then he could switch gears and focus on China.”

We don’t know if Scarramucci has any knowledge of developments inside the administration, but his comments appear to suggest he does know something, and they gel with reports of the administration reaching out through the US ambassador to Germany to its big car makers.

Similarly, if Trump is close to a deal on NAFTA, this may support the CAD against Asian currencies.

Bank of Canada expected to proceed with another hike

The Bank of Canada is set to decide on rates next week, and is likely to raise rates for a second time this year to 1.5%, after a 25bp hike in January, and lifting rates twice in Jul and Sep last year from 0.5%.

Canadian labor data is due on Friday and should remain upbeat.

The Canada Markit PMI manufacturing survey released on 3 July rose to 57.1 in June, a high in data available on Bloomberg since 2015. 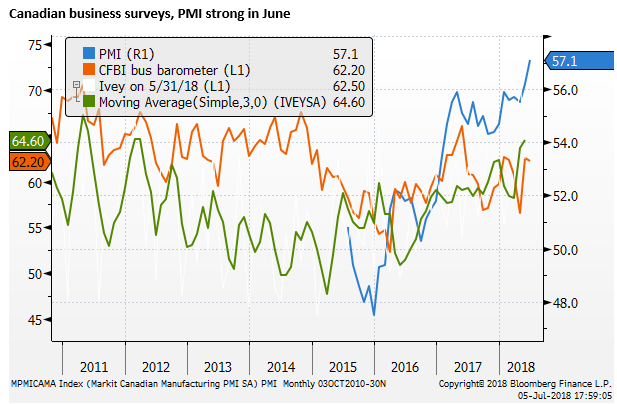 The Bank of Canada quarterly survey was released on 29 June.  The bank said, “Despite some expectations of a moderation in the pace of sales growth, firms’ sales outlooks remain robust, supported by strong foreign and domestic demand, and improvements in some commodity prices.” 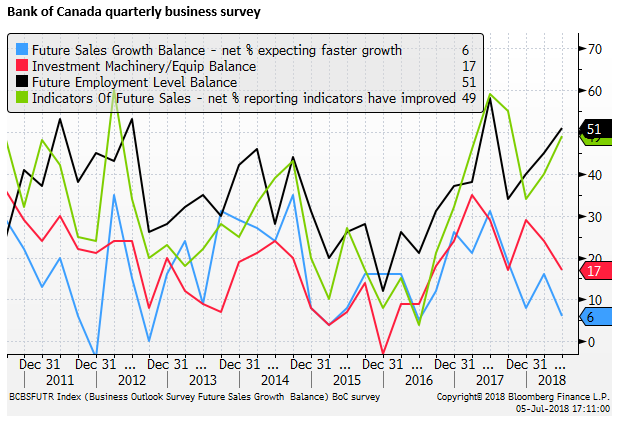 It further noted that, “Reports of pressures on production capacity and labour shortages are increasingly common, mostly outside the energy-producing regions.

And, “The Business Outlook Survey indicator moved up to near-record levels, in line with widespread business optimism. Note: Almost all interviews were conducted before the announcement of tariffs on steel and aluminum imports from Canada by the US administration on May 31.”

Oil prices should not be a big threat to CAD

Notwithstanding some fall in oil prices on reports that Saudi may be acting more forcefully to cap oil prices. The oil price remains elevated.  CAD has fallen in recent months despite rising oil prices and thus may have scope to recover even if oil prices retreat; especially if the BoC proceed with hikes and NAFTA trade tensions ease. 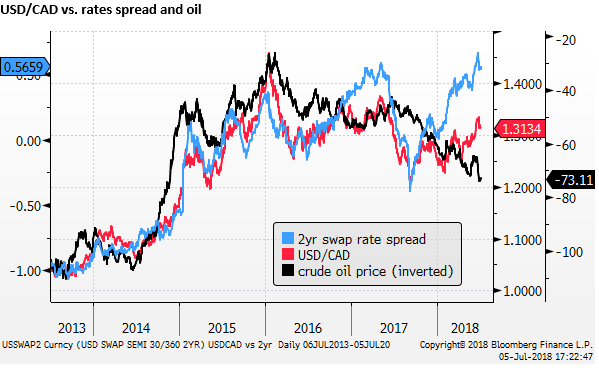