There are a few different themes to wrap your head around in the FX market.  We started today looking into trade rhetoric and its impact on markets.  Last week it appeared that trade tensions were easing, this week they are ratcheting up again.  Trump is willing to go to significant lengths to redress what he sees as long-lived and ingrained foreign policies to protect their industries. He wants to seek advantage for US industries and sees this as important for shoring up his political support and delivering on his election promises. The proposed auto tariffs are moves on the EU and NAFTA partners.  Sanctions policy on Iran and Russia add to trade tensions with Europe. Failing detente with North Korea may intensify US trade tensions with China.  We should continue to expect a stream of trade-protectionist threats from the US.  These are likely to be aimed at China, the EU, and its Nafta partners, but may have a much wider effect.  Early on, Trump’s trade rhetoric appeared to weaken the USD on fears that Trump would isolate the US, weaken US hegemony, and undermine the reserve status of the USD.  As Trump’s domestic political fortunes rise, strident trade policy is tending to boost the USD, lifting growth and inflation risks at home, dampening confidence in trade partners and global growth.

Trade risks ratcheted down after recent meetings between senior officials of the US and Chinese governments put off the introduction of tariffs.  Also, The US government reversed some of its actions against ZTE, allowing it to operate in the USA.  Chinese regulators restarted their review of the Qualcomm bid for NXP Semiconductors.  And Chinese negotiators said they would encourage more imports from the USA.

Trump tweeted three days ago, “China has agreed to buy massive amounts of ADDITIONAL Farm/Agricultural Products – would be one of the best things to happen to our farmers in many years!”

In the midst of some political tension between Australia and China, a Chinese newspaper suggested an easy way to trade more with the US would be to cut imports from Australia. (Time for China to cool Sino-Australian ties; 23 May – GlobalTimes.cn).

However, the negotiations are far from over.  The USA administration is still heavily focussed on reducing its trade deficits, preventing US technology transfers to China, and reducing Chinese state support for its high tech industries.  Most see China as unwilling to compromise on what is thought to be a core mission to upgrade its tech sector.

Why China Is Winning the Trade War, 23 May – NewYorker.com

Trump tweeted yesterday, “Our Trade Deal with China is moving along nicely, but in the end we will probably have to use a different structure in that this will be too hard to get done and to verify results after completion.”  It is hard to interpret this statement, but it points to a sceptical attitude and long, combative negotiations

Later the same day, Trump tweeted, “There will be big news coming soon for our great American Autoworkers. After many decades of losing your jobs to other countries, you have waited long enough!”

However, the implementation could take longer than ten months, according to a US government official, as basing tariffs on national security arguments require detailed studies.  It would be harder to establish a national security interest in producing autos than for steel and aluminium.  Nevertheless, just the threat of tariffs may encourage automakers to invest more in US production facilities.

In contrast two days earlier, China appeared to further ease trade tensions by cutting its tariffs on auto imports from 25% to 15%.

By looking to raise tariffs on autos at the same time as China is cutting theirs makes it appear that the US Administration is going beyond what is fair to support its own industry.

It appears to illustrate that Trump is willing to go to significant lengths to redress what he sees as long-lived and ingrained foreign policies to protect their industries.  It appears that the USA President wants to seek advantage for US industries and sees this as important for shoring up his political support and delivering on his election promises.

Pressure on NAFTA and the EU

However, Chinese auto tariff cuts and proposals to raise US auto tariffs are not at the heart of the US-China trade relations.  European automakers stand to gain more from China tariff cuts, and EU, Canada and Mexico stand to lose more from US tariffs.

Some commentators have concluded that the proposed US auto tariffs are intended, at least in part, to pressure Mexico and Canada to concede ground to the USA in NAFTA negotiations.  Both Canada and Mexico are highly integrated with the USA in auto production, and Trump wants to shift the balance towards more production in the USA.  Trump’s team argue that this is about making trading conditions fairer.

Trump said on Wednesday, of Canada and Mexico, they are, “very difficult to deal with”, “They have been taking advantage of the U.S. for a long time. I am not happy with their requests, but I can tell you in the end, we win.”

US Trade Representative Robert Lighthizer said of NAFTA, we “are nowhere close to a deal.”  There are no ministerial meetings scheduled; talks will continue at the staff level. Nafta Talks Stalled on U.S. Auto Demands; 23 May – WSJ.com

Entwined in trade dealings is the cancellation of the US-N.Korea summit.  Some commentators suggest that pulling back from these negotiations makes it less imperative for the US to concede ground in trade negotiations with China.

The US re-imposition of sanctions on Iran also feed into US trade dealings with the EU.  The sanctions open a rift between the US and the EU.  They set grounds on which the US may impose sanctions on European companies that deal with Iran; including restricting their trade with and in the USA.  The talk of tariffs on autos further threatens trade relations between the two regions. The US is set to move ahead on steel and Aluminium tariffs imposed on the EU.

US Sanctions against Russia, expanded in early April, can also be seen through the prism of economic and trade relations.  They have caused some disruption in aluminium trade from Russian company Rusal, and affect how the oil market sees the stability of supply from Russia and its ally, Iran.

How markets view the trade news

It is difficult to assess the impact of the various trade policy actions by the USA.  On the one hand, much of the US moves are threats or proposals that may be used as bargaining chips in long-lived negotiations.  During the negotiation phase there may be little net impact on global trade flows, and in turn global economic activity.

Market attention to the threat of trade wars may ebb, and investor confidence may be buoyed by ongoing solid global growth.

On the other hand, the difficulty in predicting the next moves by global leaders, in particular, the fast pace of statements from Trump and often conflicting views of his advisors may keep global investors on edge.  Companies around the world may slow their investment plans due to uncertain future economic and trade relationships.

It does appear that the US President has a high priority of increasing the US’s trade advantage.  We should continue to expect a stream of trade-protectionist threats from the US.  These are likely to be aimed at China, the EU, and its NAFTA partners.  But the fallout can be much wider.

These threats have had a mixed impact on global markets.  At times it has appeared to weaken the USD on views that the US is becoming more isolated, its hegemony is diminishing, it risks losing the reserve status of the USD, and other regions will seek stronger trade relations that exclude the USA.

At other times it has supported the USD on views that it will increase investment in US production capacity, boost US industry and dampen industry in countries that export to the USA.  It has raised inflation and rate hike expectations in the USA. And It has undermined confidence in global growth, especially for countries that have a high share of GDP dedicated to the traded goods sector; resulting in weaker emerging-market assets.

Political stability in the US interacts with Trade news

Part of the market impact may depend on the degree of political stability of the Trump administration.  When Trump’s approval rating was at its weakest, the trade rhetoric appeared to have a more negative impact on the USD, tending towards notions of US isolation and views that Trump’s opponents might use global and industry backlash to undermine Trump’s hold on power.

However, over recent months, Trump has been more effective in throwing a smokescreen over the Mueller investigation, and may be gaining traction with widening frustration over the investigation that has dragged on for over a year.  He also senses that he is shoring up his voter base and broadening his appeal to the left by pursuing a tougher trade policy.  As such he appears to be in a stronger political position and market reaction to trade-protectionist rhetoric is working more in favour of the USD. 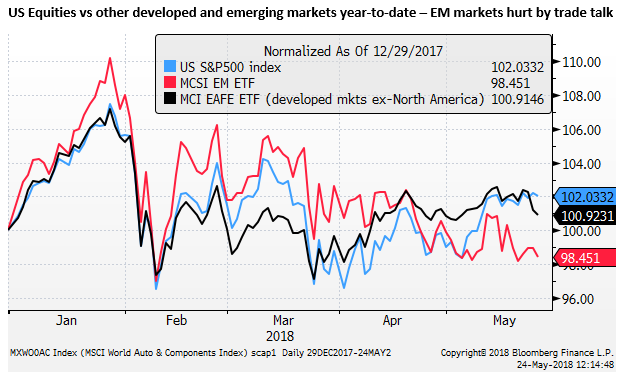 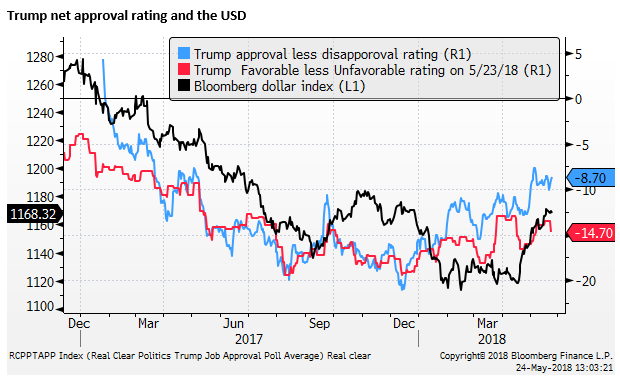