The market gives Powell a thumbs down

The Fed has displayed a lack of flexibility and is generating market fears that it will make a policy mistake.  The pundits continue to applaud Powell, but the markets have delivered a thumbs down; the US yield curve has inverted from 1 to 5 years, the US equity market has had its biggest correction since the global financial crisis, market-based inflation expectations have fallen significantly, and the USD is stalling notwithstanding higher rates and global growth risks.

The Fed delivered what was largely expected today – a hike with a one hike downward revision to the projection for rate hikes over the next two years.

However, that policy decision was expected simply because the Fed let the market interpret its recent comments as such.

Fed Chair Powell and other key members said that they were going to be more flexible, more data-dependent, more cautious now we are approaching neutral rates. However, this appears to have only meant they are going to tweak their projections.

The projections are the problem

The projections themselves are a problem.   The fan chart of possible rate moves over the coming years has widened.

These projections were introduced by the previous Chair Yellen to give the market a sense of certainty that policy would stay accommodative for a long time.  They were intended to send a message to encourage animal spirits in the economy.

The Powell Fed seems to miss the point that it needs to urgently down-play the projections.  Powell has tried to do that with words, but the best way, perhaps the only sure way, was to demonstrate that they do not have to follow them.  And that meant not hiking in December was the by far the best policy option.

The Fed is still operating under the framework set by Yellen.  She was a thought leader and could set a policy framework to suit the conditions she faced. Conditions have changed, But the Fed is not yet displaying it can change.

Yellen set the Fed on a path to gradually remove QE.  The idea was again to provide certainty to the market so it would not be unduly focused on the size of the Fed’s balance sheet.  However, we are seeing evidence of tightening in short-term money markets and increased volatility in global asset markets.  The market is looking for reasons and is worried that QT is a possible cause.

The Fed led us to believe that QE would be effective in boosting asset prices and reducing the price of riskier assets at all levels.  Clearly, the market is going to worry that QT will have to opposite effect.  In fact, it should, at some point, place upward pressure on credit spreads and tighten financial conditions.

The Fed is reluctant to accept that its QT could now be having a tightening effect on markets.  Even if this is debatable, it is a risk that should increase the Fed’s awareness of broad financial conditions that have tightened abruptly in recent months.

Powell has emphasised that the Fed will be more data-dependent.  He has also said that they will (and have) looked at financial market developments.  This appeared in their policy statement. However, even though financial conditions have tightened significantly, arguably to a high since 2016 when the global economy was experiencing significant upheaval, the Fed hiked rates anyway. 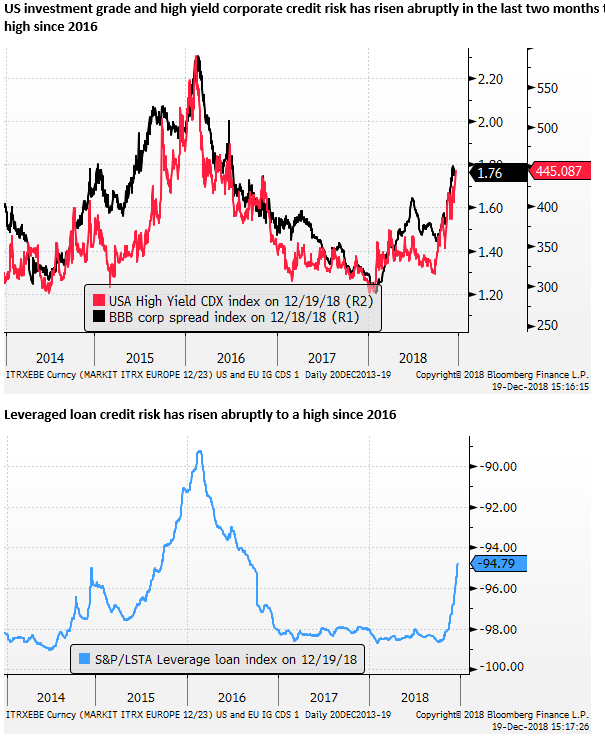 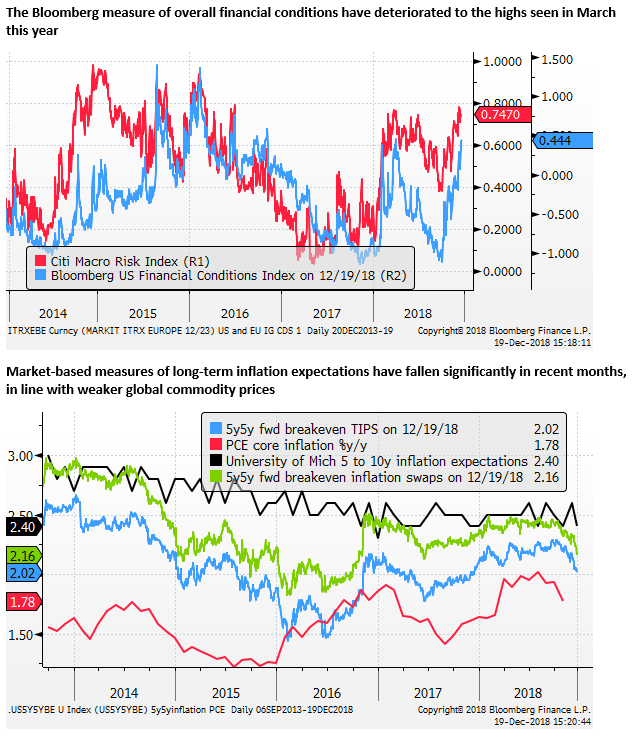 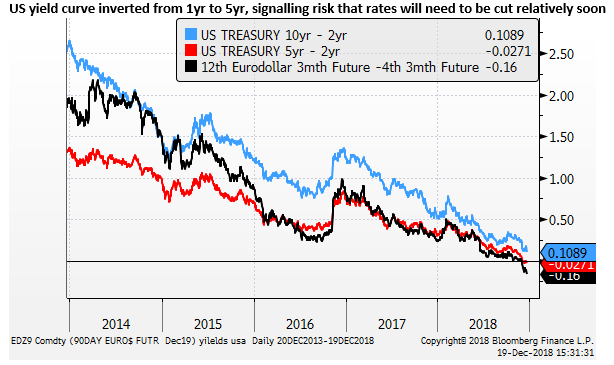 If the Fed was only looking at economic data, it could explain a hike in December.  So it does appear that the Fed has been economic data dependent.  But it has shown a tin ear when it comes to financial market conditions.

Powell said that the tightening of financial conditions made the Fed downgrade its growth and rates forecasts (i.e. projecting three hikes over two years instead of four hikes projected in September).

This is a rather ham-fisted way of attempting to calm nerves that the Fed is watching and considering financial market signals.  Hiking rates is a hard policy decision that is supposed to have long-lasting implications for the economy that will not have full effect for 12 months or more.

We are often told by central banks that monetary policy has long and variable lags, if financial markets are flashing a warning sign for the economy now, the obvious policy choice is to pause watch and wait.

Playing the wrong side of the odds

There is little that the Fed appeared to risk by waiting for one to three policy meetings, and possibly longer if required.  Inflation remains just below the target. After running consistently below target for most of the last decade, a period of above-target inflation might be helpful in anchoring expectations.  A point some Fed members have made.

The standard message of central banks is that their job amounts to mitigating risks of a policy mistake.  The obvious choice in December was to pause, wait and assess.  To do so provided only upside.  Choosing to hike again, demonstrating inertia and lacking sensitivity to current conditions, involves significant risk with questionable upside.

The market delivers a thumbs down 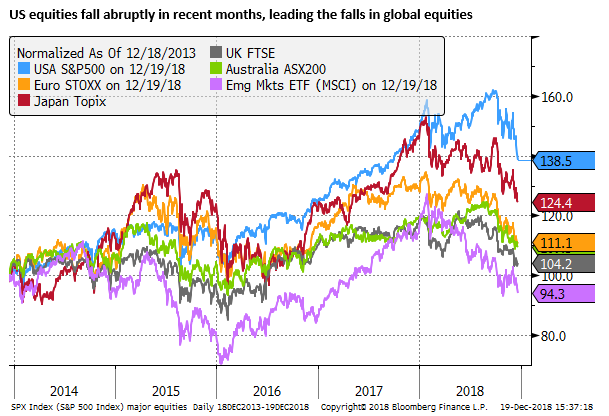 It’s not a good look for the USD

We do not think this is a good look for the USD next year.  But with higher short end rates and a lack of consistency in other potential safe-havens, the USD has strengthened today.

The USD may not sustain gains because the market will weigh the odds that a lagging reactive Fed may at some point have to cut rates to compensate for possibly raising them more than necessary.

But the path towards a weaker USD may be quite volatile as the market weighs the risks to global growth.  This close to year-end, investors will be reluctant to set bearish dollar positions.  Nevertheless, the fact is that the market has pushed down yields in the US (in spite of a Fed hike) may begin to weaken the USD. 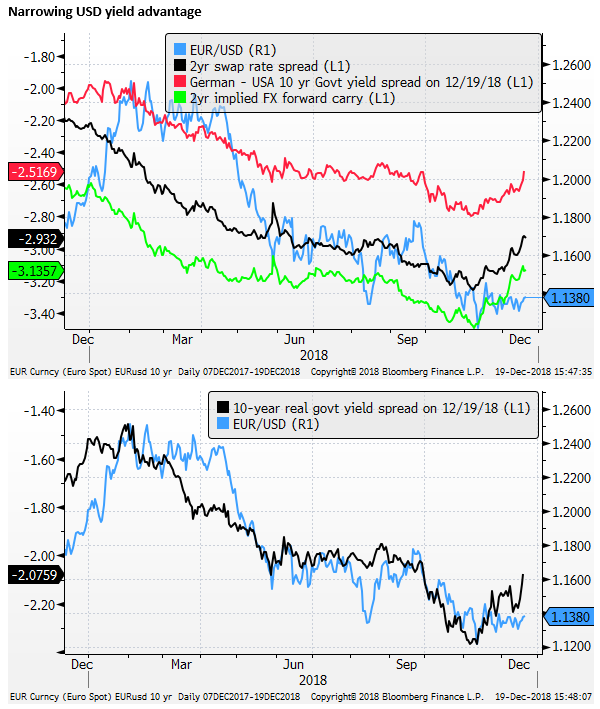 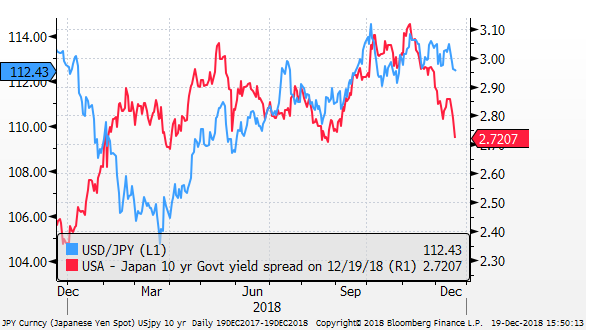 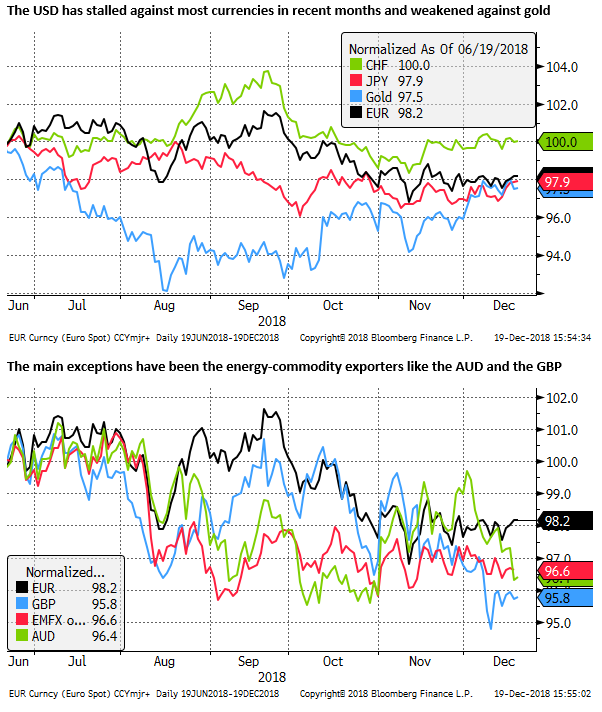