The JPY is down by about 1% on Tuesday against an otherwise broadly weaker USD.  While some of this reflects a move against safe-haven assets, the JPY also underperformed during the heightened risk aversion around March and April.  It failed to benefit from the collapse in US yields this year.

There appears to be an underlying weakness to the JPY reflecting structural changes to investment management and related capital flows in Japan.  There is much less kneejerk repatriation from Japanese institutional investors during periods of global risk aversion.  Japanese capital outflows seem to be more consistent and structural.  More generally, in a low global yield environment,  carry trades by Japanese and global investors using JPY as a funding currency are no longer a big feature of the market.  The long march of BoJ QE policy that continues to absorb domestic assets is working to crowd Japanese private sector investment into foreign assets.

QE has expanded rapidly and globally in response to COVID19.  The BoJ remains the world leader with the central bank lifting its assets from around 104% and end-2019 to 117% of GDP 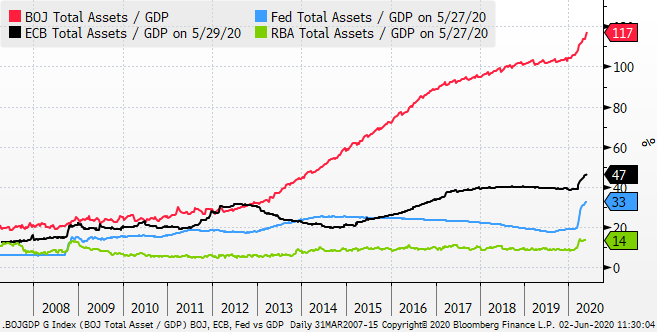 USD/JPY’s responsive to yield spreads has diminished in recent years.  The collapse in real yields in the USA, deep into negative territory, this year, did not cause much of a ripple in JPY 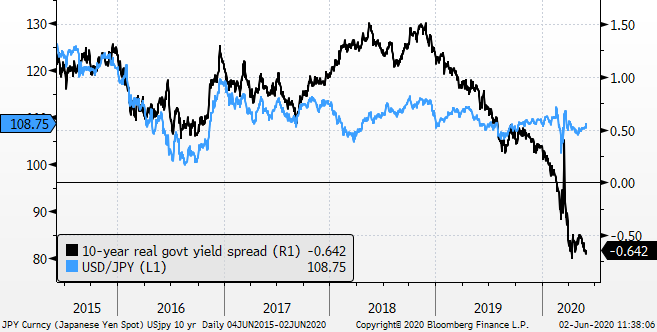 USD/JPY has had a dubious relationship with global equities.  Around mid-March, despite peaking risk aversion, USD/JPY rose sharply in response to a squeeze in USD term funding costs.  Its recent rise in May appears more related to recovering equities 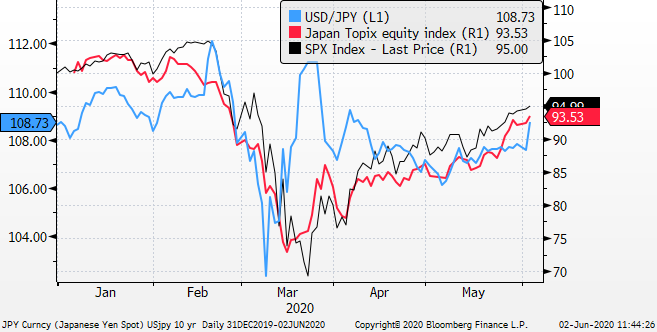 Despite significant risk events and lower US yields, USD/JPY has rarely and only briefly moved below 105 since 2016.

On the other hand, the peaks have also been lower in recent years.  Without a strong catalyst, it is hard to see USD/JPY rising above the 110/112 highs over the last year; especially if the USD is moving into a weaker phase. 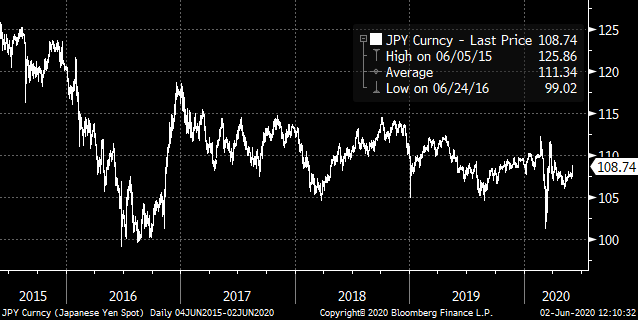 US equities lagging since mid-May 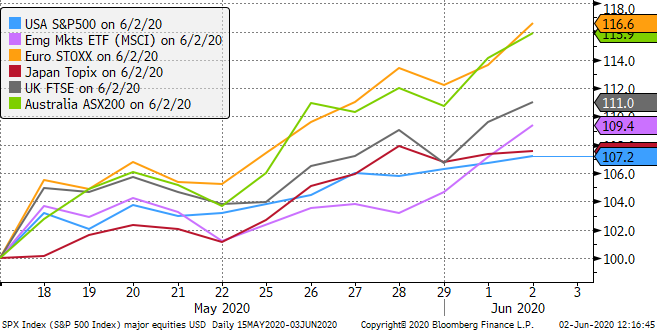 Over the year-to-date, the US equity market is still the best performer, supported by its marquee tech companies that were seen more resilient in the COVID crisis.  However, in recent weeks, sectors and emerging markets that were more vulnerable to lockdowns and tightening financial conditions, are bouncing back.  Capital flows to these sectors and regions are probably contributing to broad USD weakness.

It may also be the case in the last week that protests and political unrest in the US may be dampening investor confidence for US assets relative to other regions. 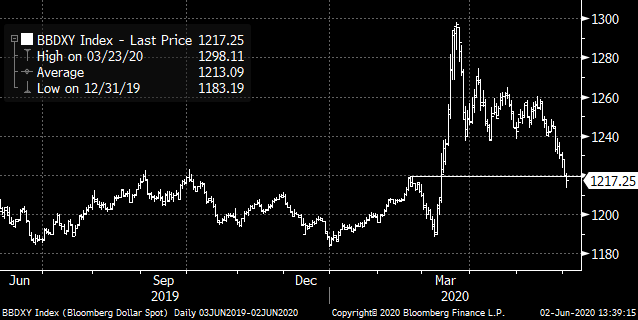 AUD and NZD surged for a second day on Tuesday.  Their gains are consistent with strong gains in other commodity currencies.  Nevertheless, the market may be finding reasons to buy on relatively good domestic economic news.

New Zealand has essentially wiped out COVID and is expected to fully remove domestic restrictions on people and businesses next week.

A story that speaks to the structural shift in Japanese capital flows discussed earlier, and points to relative strength in the NZ economy, is that Tokyo-based Shinsei agreed to acquire UDC Finance Ltd., owned by ANZ bank, New Zealand’s largest non-bank lender, in a deal worth $NZ 762m.

The RBA left policy on hold on Tuesday but said, “it is possible that the depth of the downturn will be less than earlier expected. The rate of new infections has declined significantly and some restrictions have been eased earlier than was previously thought likely. And there are signs that hours worked stabilized in early May, after the earlier very sharp decline. There has also been a pick-up in some forms of consumer spending.”

The median estimate for the GDP data is for a contraction of -0.4%q/q, which would be the first decline since Q1-2011.  Australia has not experienced two consecutive negative quarters since 1991.

The rise of Australia’s current account into surplus over the last year suggests that the AUD may sustain stronger levels on average with lower yields in future.

Korean Government Senior presidential secretary Kang Ki-jung said on Tuesday that the government plans to submit a 35.3 trillion won ($28.8 billion) third extra budget to parliament soon. That would be larger than the first two budgets combined, which totalled 23.9 trillion won. Adding in the third budget would bring the total to 59.2 trillion won, or 3.1% of nominal GDP.  (Bloomberg Economics).

The KRW has lagged in higher-yielding South East Asian currencies.  It has been held back by trade ties to China and fears of disruption in high tech supply chains.  Inflows into Korean equities have remained tepid. 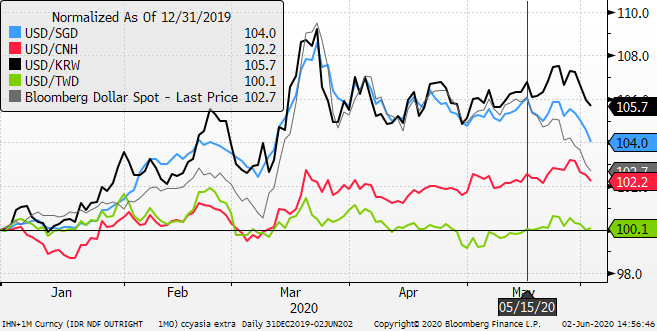 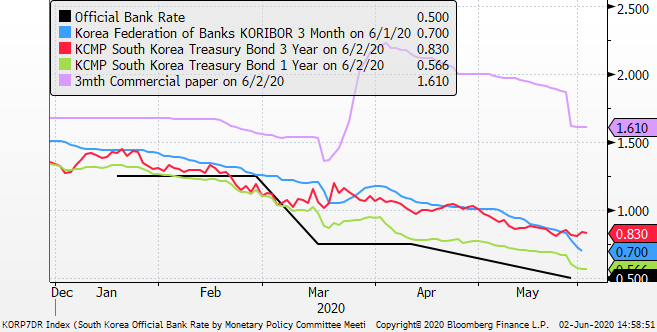 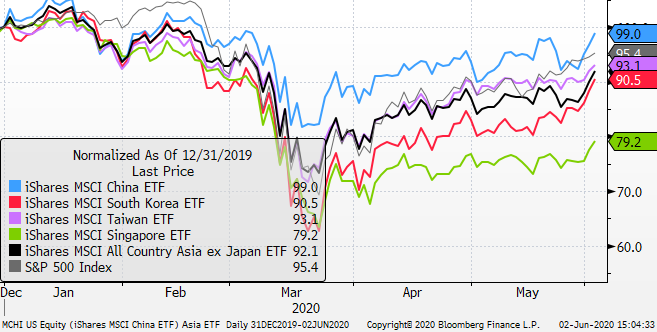