US Politics – More drama than risk

Political risk is driving down currencies in Turkey, Brazil, the UK and Australia. Politics is undermining Italian assets and poses a threat to the EUR.  However, US assets remain largely unmoved by the US political and legal troubles.  Trump has proven his ability to operate through chaos and combat controversy.  Even if Democrats take control of the House of Representatives in November and move to impeach Trump, it is very unlikely he will be removed from office, and he will probably only feel emboldened to carry on.  The USD has reasserted its strength but its yield advantage has slipped, and recent US economic reports have lost momentum.  US equities have proven relatively stable to date, but the risk remains that the US economy, assets and currency a pulled back to the pack.  A strong USD will eventually be self-defeating, tightening monetary conditions in the US and globally.

Politics is high on the agenda for several currencies.  Market doubts over the capacity of governments to establish a strategy for sustainable economic growth and financial market stability have sunk the TRL in the last month and are in the process of driving the BRL to new lows in the last week. GBP continues to languish under the weight of incapacity of the UK government to make a plan to deliver Brexit.  Italian bonds and equities are under-performing in the Eurozone, and in recent days the AUD has lost more ground than its peers on upheaval in the ruling party.

US Politics more drama than risk

The USA is not without political drama with the conviction of former Trump campaign manager Manafort and a guilty plea by Trump lawyer Cohen that has implicated the President in campaign finance violations.  These developments highlight the pressure that Trump is likely to face going forward by the wide-ranging Mueller probe including into what Trump knew about the Russian hacking of Clinton and DNC organisations.

The approaching November mid-term elections will be closely watched as a referendum on the Trump Presidency.  There is a risk that the elections dampen enthusiasm for the USD, generating uncertainty over the capacity of the Administration and Congress to provide leadership.

However, To date, the US political and legal drama has had limited impact on US asset markets or the USD.  Trump seems quite capable and willing to face-down all kinds of accusations that might once have been considered outrageous behaviour.  His administration may, in fact, be quite stable despite the high drama, and the market is not seeing recent events as a game-changer.

This may reflect the fact that Trump has proven over the two years of his presidency that he can operate through chaos and is not an easy target to knock-off.

His government has delivered on massive tax cuts, generating strong economic growth and record low unemployment.  His populist policies may be polarising, but by and large, he has cut through with his tough stance on trade policy.

Trump has had success in controlling the narrative by attacking the Mueller investigation and the media.  He has survived despite, and perhaps because of, an unapologetic double-down attitude to controversies.

Even if Democrats take control of the House of Representatives and bring on impeachment proceedings, Trump is unlikely to be much fazed. In the late 1990s, Democratic President Clinton was impeached by the House, but this failed to move to a conviction by the Senate (requiring a two-thirds majority).  The Democrats are unlikely to take control of the Senate, and even if they do, they are unlikely to gather two-thirds of Senate votes needed to convict the President and remove him from office.

Trump appears to be exactly the type that would dismiss, even draw strength, from the high drama of impeachment proceedings.  The worst that might happen is that Congress becomes distracted, more divided, and less able to pass new legislation.  However, this may matter little in the short to medium term as the economy continues to benefit from fiscal stimulus for the next year or so.

In the meantime, Trump could continue to pursue his agenda on trade and foreign policy with limited interference from Congress.

Our assessment is that political drama in the US is unlikely to have a significant and lasting impact on US assets or the USD, although it cannot be entirely dismissed as a negative risk.

Some negative feedback to US yields

The USD reasserted its strength on Thursday after a sizeable retracement in the previous week. Against most currencies, it appears to be establishing itself in a stronger range in recent weeks. 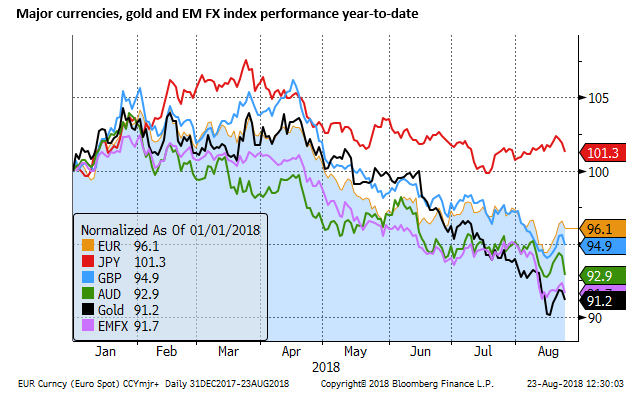 However, the recent rebound in the USD has not coincided with a fresh rise in US rates and yields relative to other currencies.  US yields have slipped, narrowing the USD yield advantage against several other low yielding major currencies; including the EUR, JPY and GBP.  US yields have fallen more than in Canada and in line with AUD and NZD yields.

This suggests that the market is seeing a greater risk that weaker global growth and tightening financial conditions abroad will have negative feedback to the US economy. 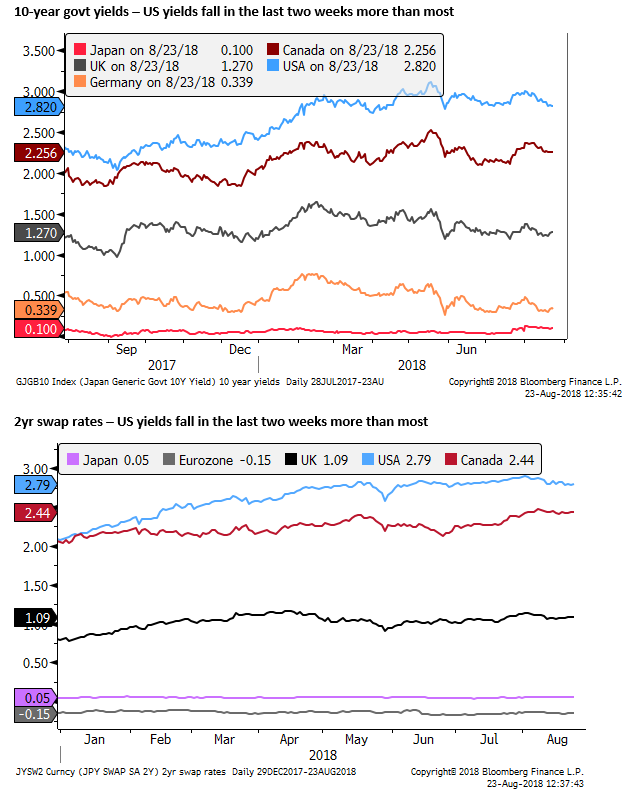 Perhaps the USD is able to retain its rising trend because of its still significant yield advantage, even if it has been whittled down a bit recently.

There may still be confidence that the US economy is able to withstand the risks faced by the global economy; in this sense, it is a relatively safe place to invest.  As discussed above, the US may have much political drama, but this does not necessarily lead to political risk.

Some of the risks to the global economy relate to US trade policy.  The market appears to sense, at least for the time being, that trade policy creates more downside risk for China, Mexico, Canada, and Europe than the USA. 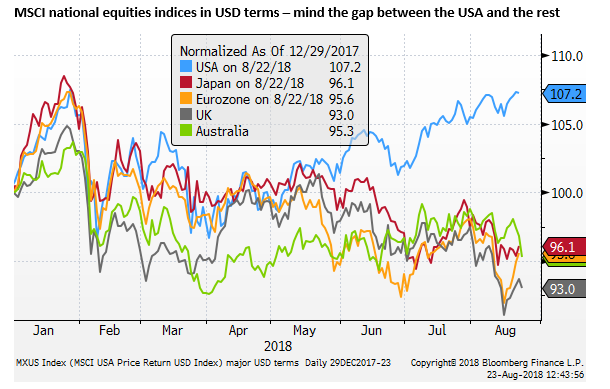 Some peaking in the US economy

However, there are some signs that the US economy may be losing momentum.  A risk we have highlighted in recent reports is that weaker global growth confidence generates more serious concerns for US asset markets, dampens expectations for Fed rate hikes and triggers a more significant correction in USD strength. 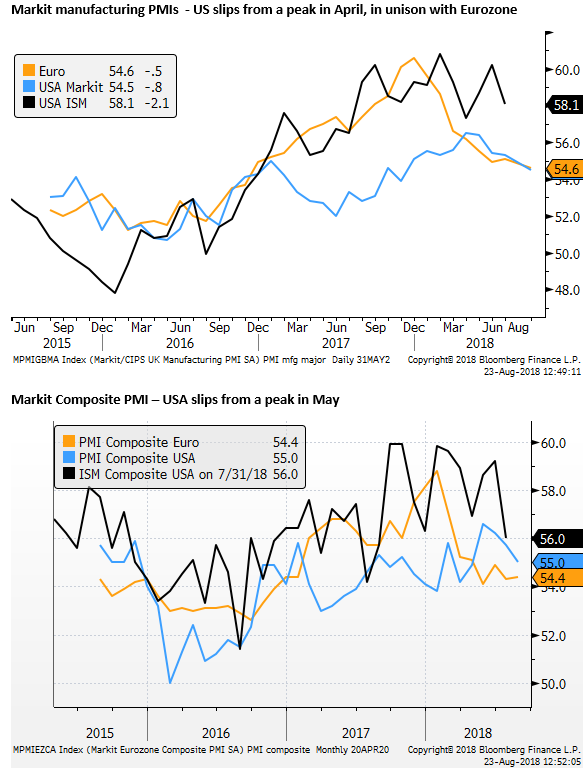 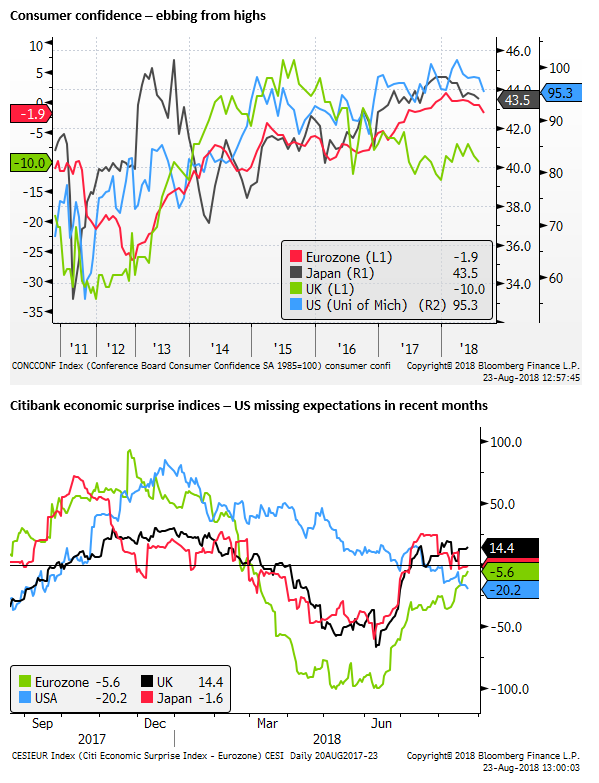 Eventually, strength in the USD would be self-defeating, tightening financial conditions for the USA and many emerging market economies that have liabilities to fiance in USD.  At some point it would more significantly undermine confidence in the USA and global economy to the point where US asset prices fall back to the pack, most likely bringing down the USD and US rates with them.