US real yields fall, and the Fed wants higher inflation

The surge in Chinese equities, leading a broader rebound in emerging market assets is significant and hard to ignore.  The AUD has significantly lagged the rebound in risk appetite indicators, including copper, other commodity and Asian currencies.  Fears over Australia’s housing market have dominated recent developments, but labour market indicators suggest the RBA will be in no hurry to cut rates.  US real yields have fallen significantly since their peak in November last year and may reflect recent evidence of weaker economic activity.  Prominent Fed members suggest the Fed may be moving to target average inflation, paving the way for lower US rates and a weaker USD outlook.

Chinese equities have shot higher on hopes of a trade deal.  The rally has been building since the beginning of the year and also reflects policy stimulus, both monetary and fiscal, and targeted measures to address tighter funding conditions for private companies in China.

Many commentators have expressed scepticism over the rebound in global and Chinese equities, and concerns over the capacity of Chinese to stimulate its economy, given high levels of national debt.  However, investors may be forced to consider an increasing possibility that policy efforts and signs that both the US and China want to end trade hostilities sustains a rebound in global risk appetite well into this year. 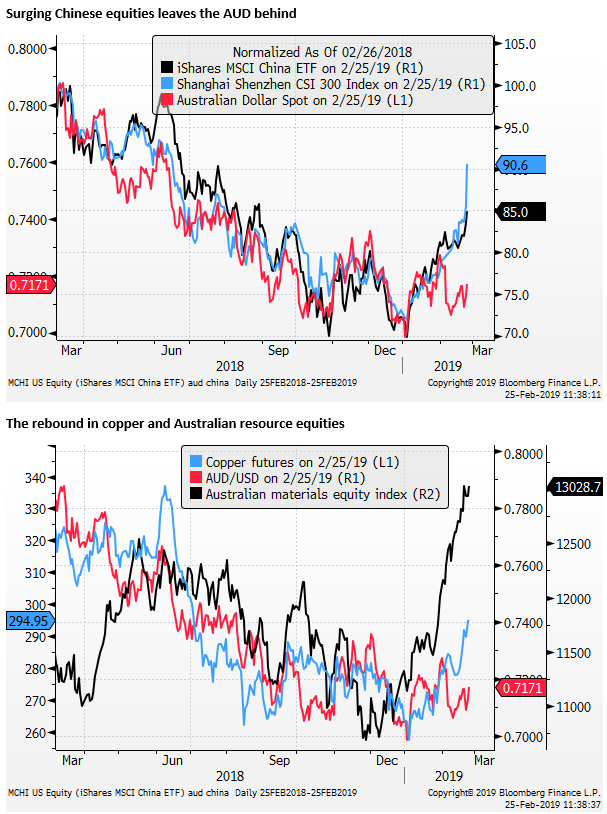 The AUD has underperformed most peers in Asia and other commodity currencies, which appears to reflect hand-wringing over the Australian housing market, resulting in the RBA moving from a soft tightening bias to a neutral bias in its February policy statements.  The local rates market has extrapolated the shift in RBA tone to price-in a significant risk of rate cuts over the coming year.

Notwithstanding strong labour market data, the high-profile chief economist of one of the big four Australian banks, Westpac’s Bill Evans, made waves by shifting his rate call to forecast two 25bp cuts in August and November late this year.

As many countries have, Australia experienced weaker economic activity indicators around the turn into 2019.  Its GDP profile was revised down abruptly in December; in particular household expenditure, raising the risk that the weak housing market is spilling over the weaker consumption growth.  The RBA highlighted this as a major risk to its projections for modestly above-trend economic growth and gradual progress towards lower unemployment and higher inflation.

It remains to be seen if the RBA will cut rates, or indeed if some further policy easing succeeds in further weakening the AUD if global risk appetite recovers further from its recent lows.  From where we sit, it appears that the AUD has factored in heightened concerns over the weaker housing market and the risk that it spills over to the broader economy. 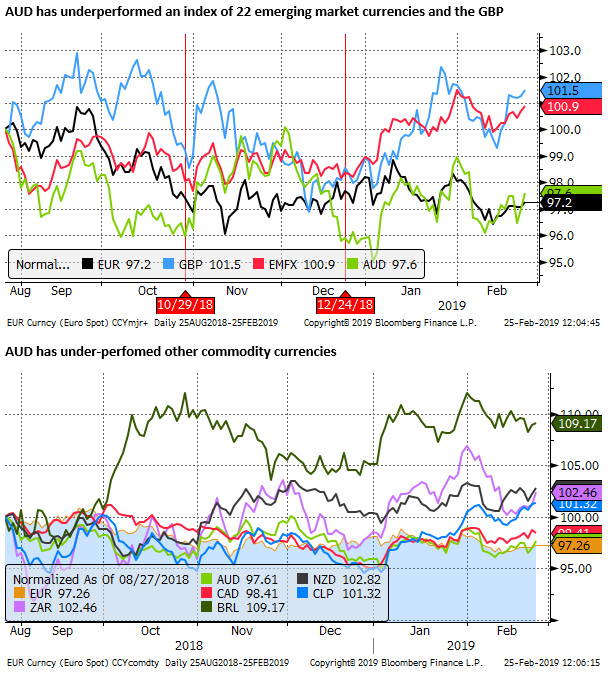 We caution that higher resource sector profitability, government infrastructure spending and recent signs from vacancy data that the labour market retains solid momentum support economic activity.  The pace of the housing market decline may moderate and household spending, supported by strong employment growth, may remain reasonably immune to what may be viewed as a healthy correction in house prices. 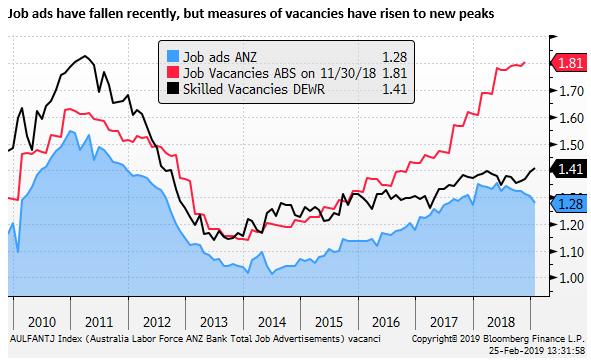 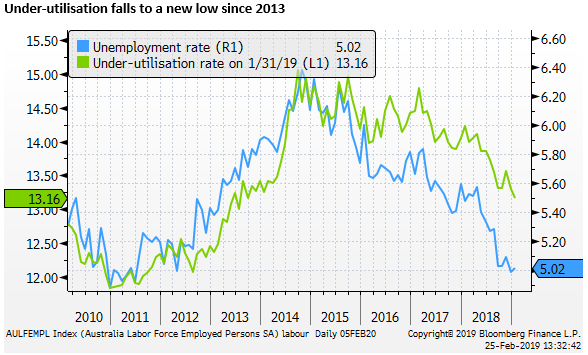 The weaker housing market certainly makes the Australian economy more vulnerable to external shocks that might arise from the trade dispute or a debt crisis in China, but the recent evidence suggests that these risks have eased for the time being.  As such, we see scope for the AUD to recover some of its recent underperformance of other Asian and commodity currencies, and indeed global equities and commodity prices.

Real yields declines in the USA

Another development that may influence currency markets is a decline in real 10-year yields in the USA, as inferred by inflation-linked bonds. 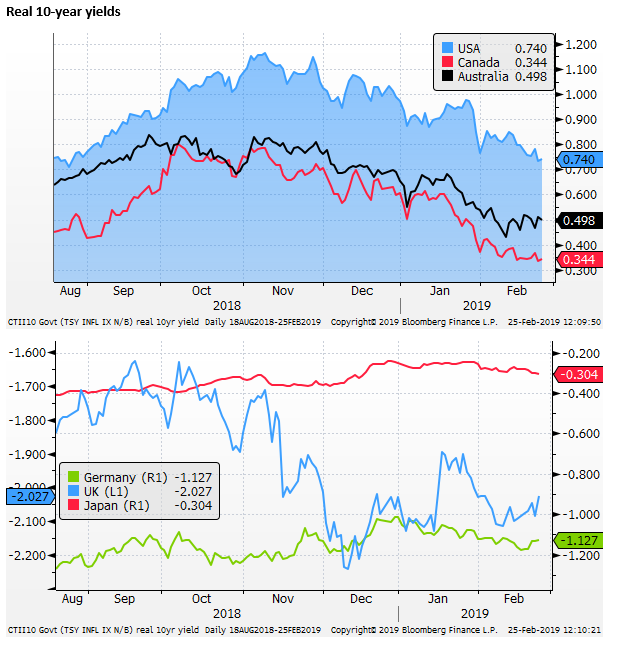 US real yields peaked in November last year at 1.16%, falling to 0.74%, a low since August last year.  This has led a fall in a number of other countries’ real yields, including Australia and Canada. However, yields in the USA have fallen somewhat further in recent weeks, whereas they have stabilised in other countries.

Notwithstanding the weaker economic reports in the Eurozone in recent months, German real yields have been relatively stable (albeit in negative territory), highlighting the fact that yields are already depressed in Germany and there is little capacity for monetary policy to press them yet lower.

Lower US yields suggest that confidence in the US economy has faded, and the outlook for Fed policy is towards easing.

Recent US economic reports have underwhelmed expectations, increasing fears that the US economy is entering a weaker growth phase. 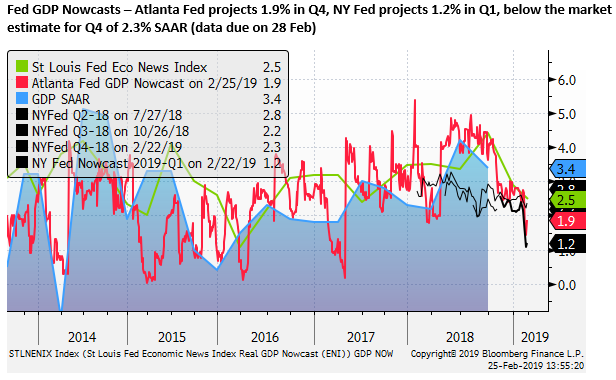 10-year real-yield spreads have been more correlated with exchange rates than short or long term nominal yield spreads over the last year.  The recent fall in USA real yields points to downside risk for the USD. 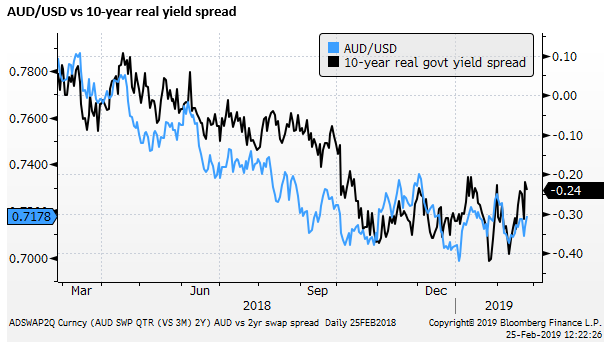 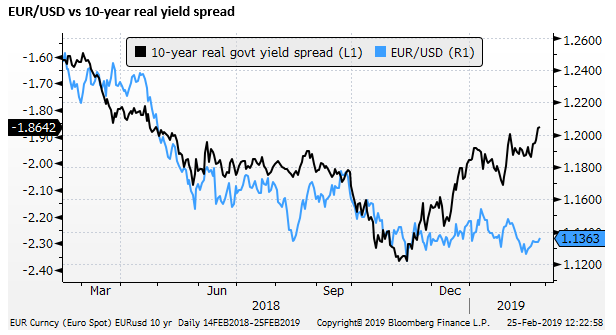 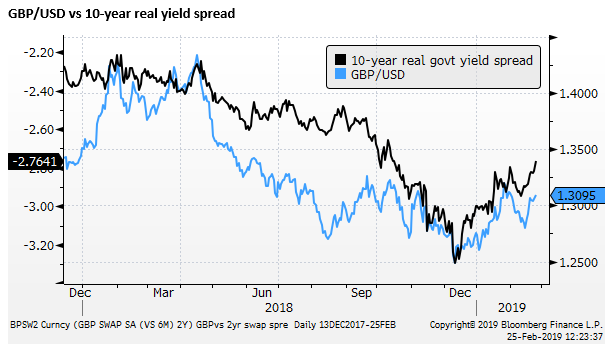 The EUR, like the AUD, has been depressed in recent months, dragged down by much weaker than expected economic data.  Both the AUD and EUR appear to be undermined by concern over the state of the Chinese economy and trade talks.

As the chart above shows, the EUR/USD has significantly underperformed a narrowing in its 10-year real yield disadvantage.  We see upside risk developing, especially if trade tensions between the US and China continue to ease.

UK policymakers appear increasingly focused on averting a no deal Brexit, and this may also tend to ease fears of fallout to the UK and Eurozone economy.

Another interesting development is the comments by prominent Fed members, NY Fed President Williams and Vice Chair Clarida on Friday that suggests the Fed is considering moving to a framework where it targets inflation averaging around its 2% inflation target; requiring periods of above-target inflation to compensate for periods of below-target inflation.  This would suggest a shift towards a more dovish Fed than has been experienced over recent years.

The Fed is embarking on a comprehensive review of its policy framework this year, and these comments suggest that the Fed is relatively close to implementing a policy of targeting a period of above 2% inflation to compensate for the recent history of sustained below 2% inflation.

The comments increase the probability that rates in the US have peaked and, in general, lower rate expectations moving forward.