JPY continues its confounding behaviour, one of the strongest currencies to start this week, even though equities continued their rise to fresh highs since the crisis lows.

JPY was surprisingly weak last week and remains within well-worn ranges that should continue to be respected (105 to 110).

Gold also rose against a weaker USD on Monday, retracing some of its modest falls last week to remain in its recent ranges around its highs since 2012. And Treasury yields edged off their highs last week. This may reflect expectations for a relatively dovish FOMC meeting on Wednesday.

Yields rose last week as the equity rally gained momentum.  The Fed has slowed its emergency purchases of bonds recently (it bought $21.6bn Treasury bonds in the week to Wednesday).  Higher yields might support the USD and may have helped capped the rapid rise in EUR on Friday last week.  But yields have failed to extend their rise this week, even though equities have risen further. The dip in yields suggests that the market expects the Fed to contain the rise in yields sufficiently to sustain a rally in stocks.

Capped US yields and strong equities are a bullish combination for EM and commodity currencies.  This may limit demand for safe-haven JPY and gold, but the USD would tend to be weak in such a risk-positive environment, and these safe-havens might be mixed or range-bound.

As it stands, the Fed has set the IOER at 10bp and is targeting a Fed Funds rate between zero and 25bp. The effective Fed funds rate was 0.07% on Monday.

It has not set a specific target for securities purchases but has been buying in amounts “needed to support the smooth functioning of markets for these securities”.  And it has been conducting or has plans to begin a wide range of quantitative easing measures direct to the private sector.

The consensus developing appears to be for no material change to current Fed policy settings.  Although some analysts are looking for the Fed to set a specific target for its asset purchases or introduce some forward guidance to help reassure markets that their easy policy measures are likely to be in place for several years.

There are reports that the Fed is considering adopting a “Yield Curve Control” policy along the lines of Australia, which has set a target for 3-year bond yields.  However, most analysts appear to think this is a policy step that will not be unveiled until later in the year.

On Monday the US Federal Reserve expanded its Main Street Lending Program. 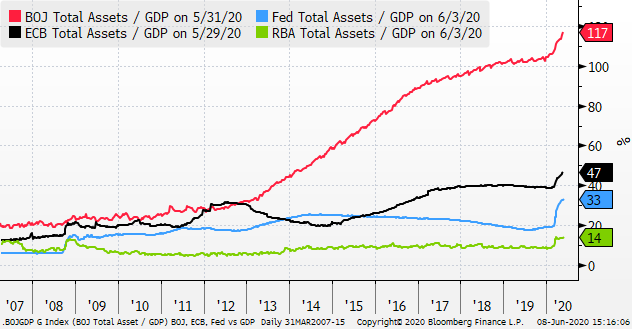 Both the AUD and NZD breached key psychological levels (0.70 and 0.65 respectively), showing little pause in their relentless rally over recent weeks.  AUD is flirting with its previous high on 31-Dec-2019 (0.7032).  Both are supported by the risk-positive mood in global asset markets.  Both may also have benefited from improved trade balances and relative success in containing the virus outbreaks.  New Zealand declared itself COVID free on Monday.

Iron ore prices rose through $100 per metric tonne for the first time since August 2019.  Brazil iron ore producer Vale also suspended operations at one mine after workers contracted COVID19.

After touching a low since 2008 on 27-May, CNY has recovered significantly, helping support further gains in the AUD and NZD, and supporting Asian currencies, in particular KRW and TWD.

The low in CNY coincided with the reports that the USA Administration would no longer certify Hong Kong’s political autonomy from China, a week after China declared its intention to impose a new security law in Hong Kong. At the time, US Congress also voted to impose sanctions against some Chinese officials for human rights abuses against the minority-Muslim Uighur people in China.

On 29-May, Trump gave a press conference where he said that he would take steps to remove Hong Kong’s favoured trading status. This process remains a risk to US-China trade relations and global risk confidence.  But the CNY and global asset markets rallied on this press conference because Trump did not announce concrete steps at the time.

In May, US-China trade tensions were rising. Trump’s administration was criticising China for its handling of the COVID crisis in what may have been an attempt to distract domestic attention away from the poor handling of the outbreak in the USA.

More specifically, the USA Administration upped its long-standing pressure on China’s Huawei by requiring producers of silicon chips using US technology to obtain approval from the US government before selling them to Hauwei.  The move appeared to raise fears of disruption in the high tech sector supply chains and contributed to weakness in CNY, TWD and KRW which lagged gains in other EM and commodity currencies in May.

There was increasing fear of break-down in US-China trade relations including both sides breaking their commitments made during the phase one trade deal agreed late last year.

The protest movement in the US over race relations in recent weeks appears to have shifted attention away from US-China trade relations.

The China trade data showed a significant increase in Chinese imports of Soybean in May, presumably from the USA.

On Thursday, US Trade Representative Lighthizer said China had done ”a pretty good job” of sticking to the phase one trade deal.  He said China had bought $185m worth of Soybeans in the last week.