The accelerated broad fall in the USD cannot be ignored and is consistent with recent moderation in USA activity. It may be a bit oversold near term, but the focus should be to sell rallies for the time being.  The Australian employment report was ho-hum and the RBA may see November as an opportune time to give the economy another shot in the arm and prevent a rally in the AUD.

The USD Bloomberg index against 10 leading global currencies fell sharply breaching recent lows, the low in Sep, and closed at a low since July.  It is down 2.4% from recent highs only two weeks ago, after making a double top. It may feel a bit over-sold on a short term basis, but this does not look like the time to be dipping the toe to buy USD.  The chart pattern may be exhibiting a significant turn of trend and the mood on the street is probably not bearish enough to assume the worst is priced in for the USD. 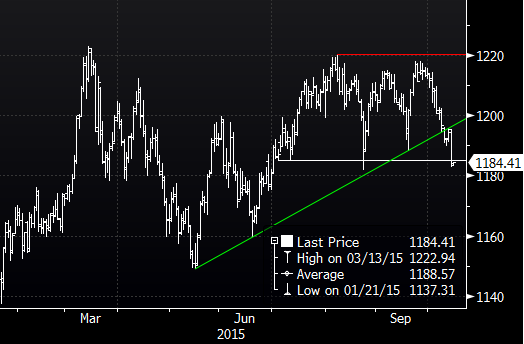 The US rates market also capitulated overnight with weak retail sales and PPI and a profit downgrade from an economy bellwether, Walmart.  The US Beige book was also less strong that the previous one, consistent with an economy that has lost some broad momentum, albeit still growing modestly.  That does not appear to be enough to regenerate thoughts of US rate hikes.  The labour market still appears to be tightening, according to the Beige Book, and there still are some nascent wage pressures.  But the risk is that these ebb and take the pressure off the case for higher rates for a more sustained period.  The bias on the street now may be to sell USD rallies against most other currencies.

Even though the US economy appears to have lost momentum, emerging market currencies were broadly stronger, apparently getting more solace in recent weeks from the prospect of a longer delay in a potential rate hike in the US that then may help sustain its modest USA recovery.

There are a multitude of US housing data out next week.  This part of the economy appears to be performing solidly and the Beige Book concurred.  So we might expect this data to show better results.  But at this time it is hard to see housing triggering renewed expectations for a rate hike within the next three to six months. As such, it may do less to support the USD than EM and commodity currencies.

RBA may see November as opportune to cut rates

The Australian labour data today was unimpressive, suggesting at best that the trend for unemployment is stable over the last year, but stuck significantly above neutral.  This may start to put pressure on the RBA to increase efforts to boost growth again.

Even though domestic activity has shown broad signs of improvement recently, the news that Westpac plans an independent hike in its standard variable mortgage rate suggests that macro-prudential guidance over the last year is starting to pay-off, and may open the door a little wider for the RBA to lower its cash rate again in coming months.

The fact that the evidence in the USA is leaning against a hike for the next few months may encourage the RBA to move ahead with a cut of its own to prevent the AUD rising.  It would probably prefer the currency to remain in the low .70s and would not fret below 70 given the low wages pressure.

While recent momentum in the economy does not pressure the RBA to cut next month, November would be an opportune time, coming after the Q3 inflation data, and in the same week as its quarterly Statement on Monetary Policy.  If the RBA sense that the economy could do with another shot in the arm there is no better time to proceed.  The market will look to the RBA financial Stability Report on Friday for any possible hints that it may cut in November.

On the other hand, recent trend in New Zealand suggest they should hold steady for the time being.  Its housing market has resumed extraordinary strength, suggesting macro-prudential steps taken around mid-year are not biting, and recent data releases have generally improved.  However, the RBNZ Governor is likely to jawbone for lower rates and a lower currency after its recent rebound.