FX markets are meandering with no clear trends, and it seems investors have little market conviction.  This appears to be resulting in choppy price action influenced mainly by short term technicals rather than macroeconomic developments.

We have noted that in recent years the FX market has appeared to be less pre-emptive, and often responds surprisingly sharply after the event.  As such we remain wary of a reversal of recent USD strength if, as it seems increasingly likely, a negotiated trade and Brexit deal might be found relatively soon.

FX markets fail to be impressed by trade and Brexit negotiations

FX markets are meandering with no clear trends, and it seems investors have little market conviction.  This appears to be resulting in choppy price action influenced mainly by short term technicals rather than macroeconomic developments.

Similarly, the EUR has failed to generate any discernible upward momentum from hopes that a trade deal might turn the tide for the Eurozone’s weak export performance over recent quarters, or that movement towards a Brexit deal may unlock more positive sentiment for the region.

On both the US-China trade and Brexit negotiations there remains a positive risk for global growth and European growth sentiment, which may yet generate upward momentum for a range of currencies against the USD.  But there appears to be limited willingness of the market to pre-empt these events.

FX market may want clear evidence and react after the event

We have noted that in recent years the FX market has appeared to be less pre-emptive, and often responds surprisingly sharply after the event.  As such we remain wary of a significant reversal of recent USD strength if, as seems increasingly likely, a negotiated trade and Brexit deal might be found relatively soon.

However, the market has reason to doubt the potential positive impetus from these events, and this may indeed be preventing it from becoming more enthusiastic about progress in negotiations.

In particular, the drop in global trade and manufacturing activity through the end of last year and into this year has been surprisingly sharp, and many are wary it reflects deeper underlying weakness in the global economy, not just related to the US-China trade dispute.  This may include underlying weakness in the Chinese economy and financial system, and a weak outlook for the auto sector.  Even though the Chinese government is now stimulating demand across several fronts, and temporary factors in the European auto sector may be unwinding, the market is wary to project a significant recovery in the global economy.

Just as the market is reluctant to pre-empt positive news from trade negotiations and Brexit, it is reluctant to believe that global trade is set to rebound from its Q4/Q1 slump.  We may have to see clear evidence that a recovery is taking hold before the market will move to buy the EUR and a range of EM and commodity currencies against the USD. 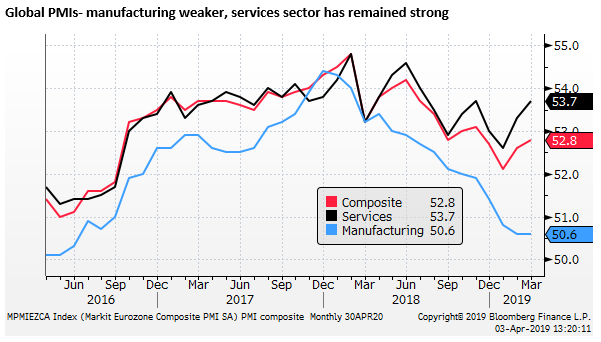 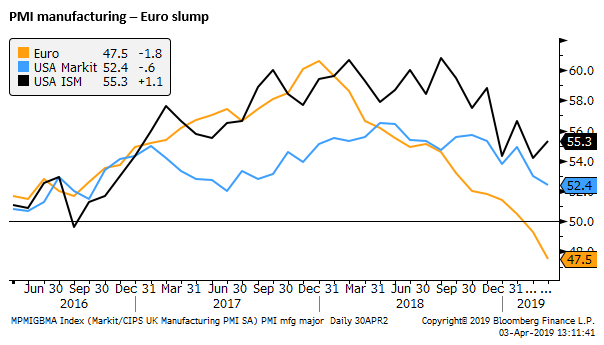 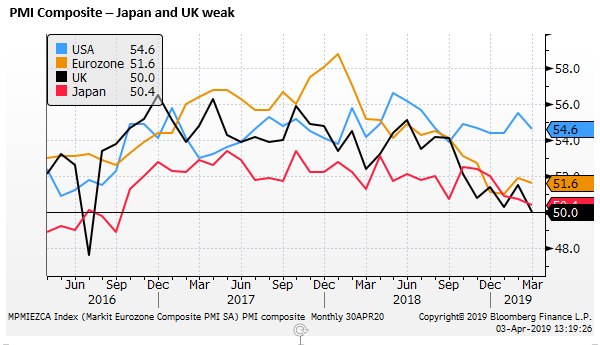 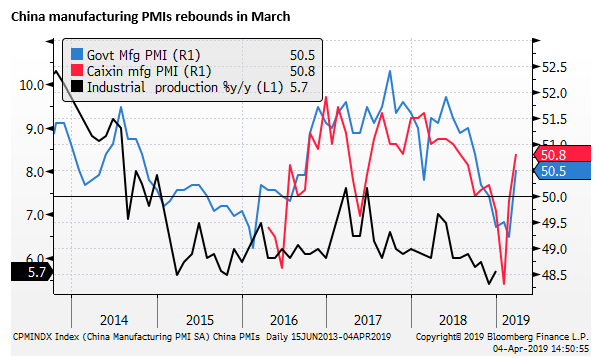 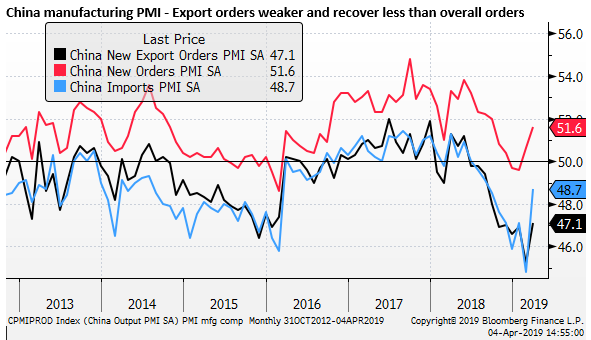 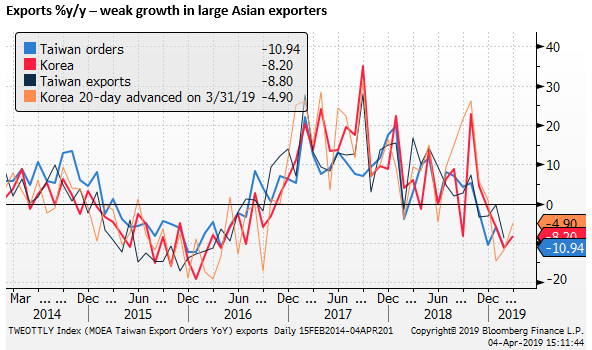 US president Trump continues to talk tough on trade.  Today he threatened tariffs on Mexico autos to pressure the Mexican government to do more to stop immigrants and drugs coming across the border.  Trump continues to play politics on border security and appears willing to risk dampening economic confidence for domestic political means.

While the rapid fall in the US equity market through Q4 last year appeared to hone the administration’s focus on resolving its trade dispute with China, the recovery in Q1 may again embolden the president to make unsettling threats on trade policy.

The prolonged trade negotiations with China and the media reports that the US is seeking to retain tariffs or the capacity to reenact tariffs to ensure China enforces its commitments to open markets and protect intellectual property rights may be generating fears that trade relations will remain strained even after a trade deal is inked.

EUR is the weak link 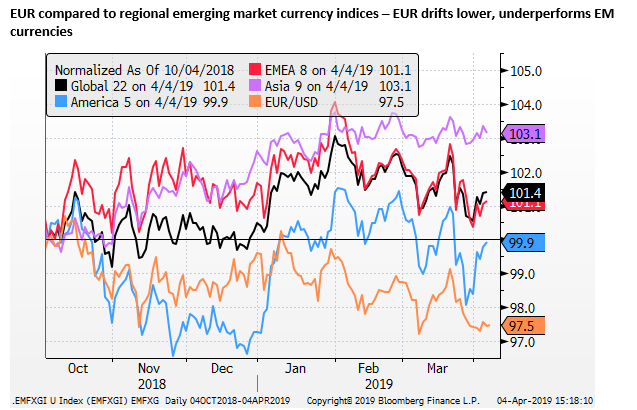 Japanification fears for the Eurozone

The EUR failed to benefit over recent months from a significant fall in US rate hike expectations and lower US yields across the curve, narrowing the EUR yield disadvantage.

The lengthening in the outlook for no change in ECB negative policy rates appears to be a key factor weighing on the EUR.  The absolute level of yield spreads, rather than the movement in the spread appears to have become more important over recent months.

Even though the EUR yield disadvantage has narrowed, it remains historically large and appears more likely to persist for the foreseeable future.  The market is weighing some odds that the next move in US rates is lower, but they appear most likely to remain stable for a long time.

Similarly, the ECB moved out its guidance for no expected change in rates until the end of this year.  Furthermore, the account of the  6-7 March ECB monetary policy meeting (released today), notes that some members preferred to extend that period to March -2020.

The market may indeed be wondering if the Japanification of the Eurozone is occurring and wondering if negative rates will persist seemingly indefinitely.

Certainly, it appears that the ECB is willing to keep rates low and negative and keep extending its forward-guidance if the inflation outlook remains subdued. 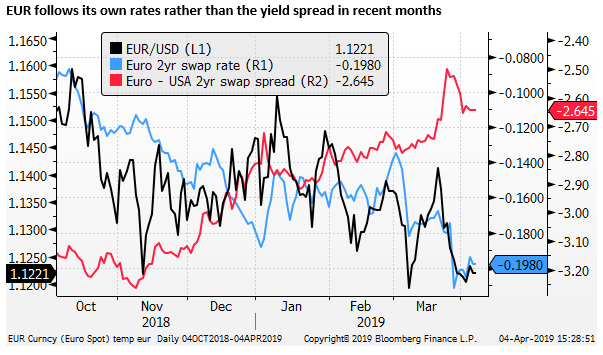 One reason why the absolute yield spread might matter more than the change in the yield spread is that global yields have fallen sharply this year, credit spreads have narrowed, and global inflation expectations have declined.  As such the market may be moving into a yield-seeking mode.

This environment generally arises when the market is not all that confident in global growth, but not so bearish that it is moving to cash and safe-havens.  This may well be the case at the moment.  US economic growth may have peaked, but it retains significant momentum.  Inflation expectations globally appear to have eased and no central banks are expected to hike rates any time soon.  Policy easing in China and a number of countries might be expected to support the economic outlook, so investors are not so unsettled to seek safe haven assets. 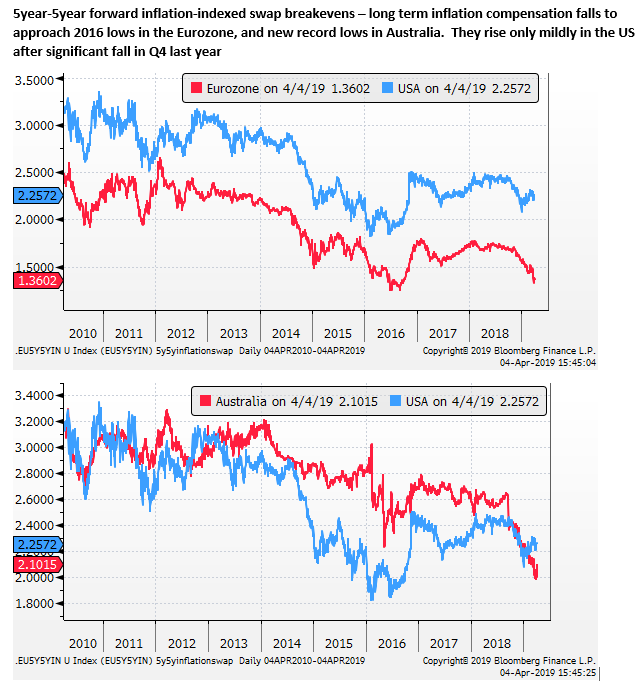 From our perspective, the decline in inflation expectations apparent in inflation-linked bonds looks excessive in light of the rebound in oil prices this year, firmer industrial metals prices, and rebound in equities.  Furthermore, wage growth has picked up in major economies as labour markets have tightened.  As such, we are not so sure that inflation risks have diminished.

Nevertheless, the ECB has downgraded its inflation outlook, inflation outcomes have continued to be muted around the world, the year-ended oil price change will remain negative through to Q4 this year, and global growth momentum has dropped in recent quarters.

As such, for the time being, the market may be less focused on pursuing high-beta growth assets and their related currencies, but more focused on locking down higher-yielding assets.  Often the two overlap and growth assets may appear to perform well, even in a moderate growth environment.  In this respect, the USD may appear to win out, especially against negative yielding EUR.

Yield grab now a negative for AUD and NZD

The same argument might be used to explain the weakness recently in AUD and NZD.  Central banks in both countries have moved to an easing bias from rates that are already well below the USD.

The AUD has drawn little support from the rebound in Chinese equities and relatively strong commodity prices.  It has failed to benefit from a projected return to government budget surplus or a record trade surplus.  It would seem to have much to benefit from Chinese policy stimulus and a trade deal between the US and China.  However, it has remained range-bound this year, dampened by increasing expectations that the RBA might cut rates in coming months. 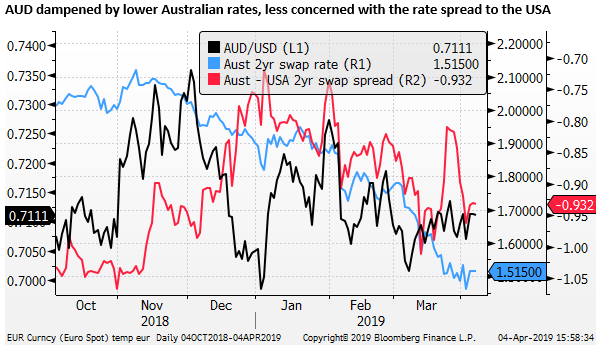 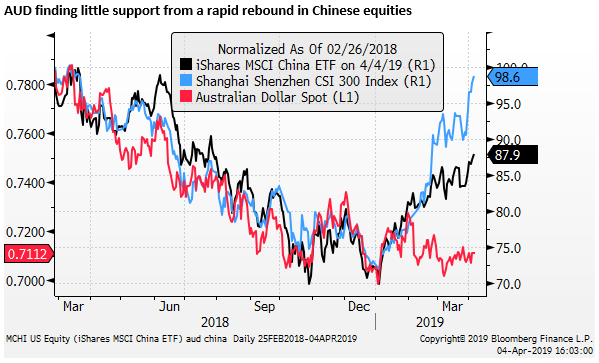 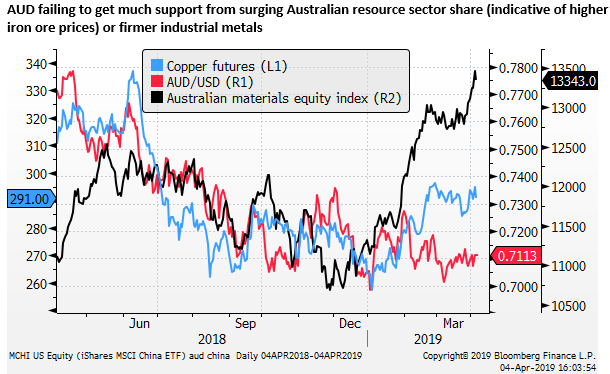 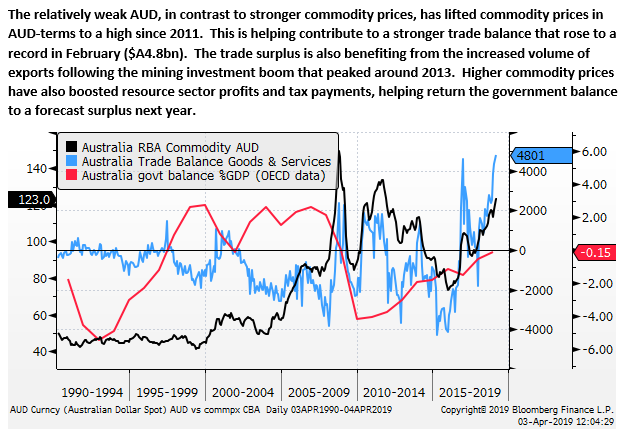