Bond yields rope-a-dope and fight back

The market absorbed more negative news on the global economy last week, including the IMF forecast downgrade, pessimistic ECB, trade threats by the US towards Mexico and Europe. However, by end week, bond yields, risk assets and the EUR were stronger, suggesting the market has built-in a quite negative scenario and may respond more to positive news in coming weeks.

Global bond yields reaffirmed a recent rising trend from a low in late-March.  Equities and bond yields may have ended an extended and wide period of divergence and entered a period of convergence or co-movement.  Yields now look relatively low compared to the rebound in equities and commodities this year.

There are latent signs of improved economic activity in China, and the US and China may agree on a trade deal relatively soon.

In the last week, the market absorbed further negative global growth news, pushing yields and risk assets lower mid-week, but yields ended the week higher.  At least for the time being, we may have seen global growth pessimism reach its worst levels, and the market appears now placed to build in more optimistic scenarios.

The first half of last week saw pessimistic views get a fresh airing; including the IMF World Economic outlook, downgrading the global growth forecast for the current year, and the ECB policy meeting press conference, highlighting downside risks for the Eurozone economy, related mostly to a weak outlook for its export markets.   Also, the US made trade threats against Mexico and the Eurozone. 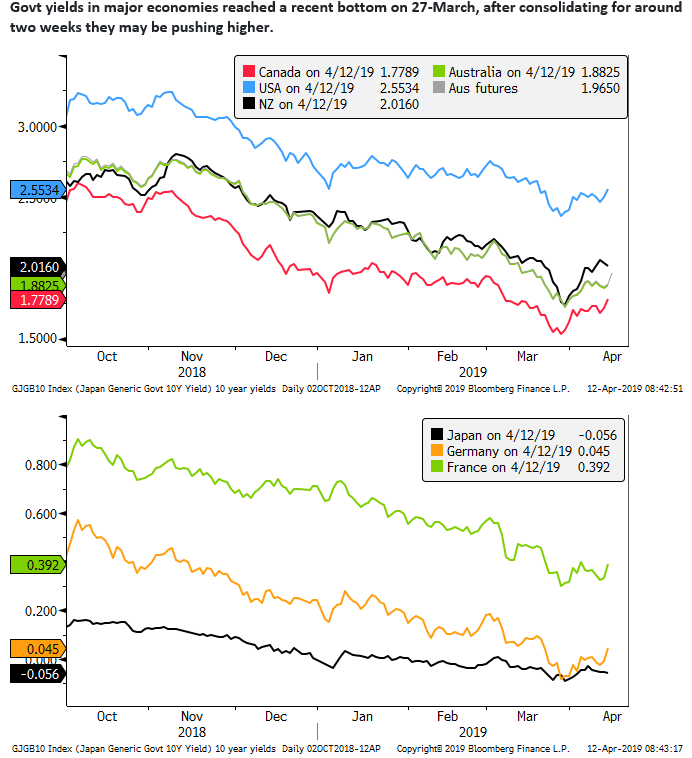 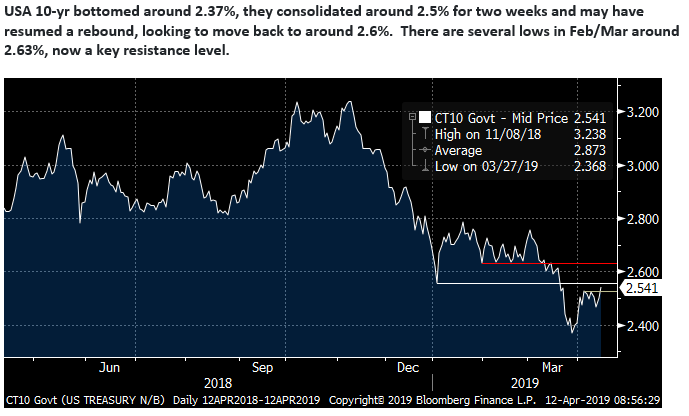 Yields have fallen this year in part because the Fed and several other central banks have moved their policy guidance to a less hawkish/more dovish stance. Inflation expectations as measured by inflation-linked bonds have declined significantly in some countries, including in the Eurozone and Australia.  For the most part, this reflects weaker economic activity data particularly in the manufacturing sector and global goods trade.

However, in comparison to the rebound in equities and oil prices and some strength in industrial metals prices this year, the fall in yields looks excessive.  There appears to be a need for either equities and commodities to retreat or yields to rebound further.

The relationship between bond yields and equity prices is not a straight-forward one.  Policy easing and lower yields can help equities rise, and certainly, that has been the case, for the most part, this year.  However, rising equity prices at some point should reflect a recovery in economic growth and company earnings expectations, generating inflation pressure and causing bond yields to rise. 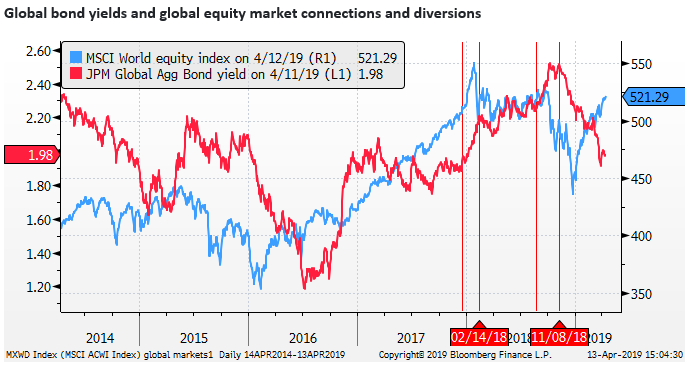 Lower bond yields in December helped the equity market rebound from what appeared to be oversold levels, but pessimism over the global economy has remained relatively high this year.  Economic data weakened further in most countries into Jan/Feb, central banks tilted more dovish, and yields continued to fall. The equity market has responded positively, reversing essentially all of its correction in Q4 last year, continuing to rally into March/April.

In the last two weeks, the tide in sentiment appears to have shifted.  Further gains in the equity market have helped lift yields somewhat from their lowest levels since around December 2017.

Having reversed all of their rise in 2018, yields now appear relatively low.  Equities are back to around record highs.  Yields appear to be at levels that should support a global economic recovery.

Equities may have already to a large extend factored in a significant economic recovery, or some rebound in yields that might temper that recovery.

Global commodity price indices that are dominated by oil, tend to be highly correlated with equities, as strength in both will tend to reflect stronger global growth.  They have been particularly highly correlated since 2015, with movements in oil, especially in 2016, indicative of financial stability risks.

Oil prices fell sharply in tandem with equities in Q4 last year, and have rebounded significantly this year, although not quite as much as equities.

Trade uncertainty may ease if the USA and China agree on a deal.

The market is still waiting on news from the US-China trade talks.  On Tuesday last week, the US administration also threatened to impose tariffs on $11bn of European goods over claims that Airbus SE has received subsidies.  This news might have further damaged confidence in European and global markets.  On Friday, the EU said it would retaliate with tariffs on $12bn of US goods.

In the first week of April, The Trump administration also threatened to impose tariffs on Mexican autos to force it to take tougher action on preventing immigrants and drug trafficking across its border with the US.  The action may be seen to threaten the USMCA trade deal that was agreed by heads of government in September last year, intended to replace NAFTA.  The USMCA is yet to be ratified by the US Congress.

Global policymakers have blamed the US-China trade dispute for undermining global trade and manufacturing activity over the last six months or so.  The uncertain trade environment is thought to be dampening business confidence globally and delaying investment decisions.

There are market doubts that a US-China trade deal will be durable.  The market also worries that even if the US and China resolve their trade dispute, the US administration will continue to use threats of tariffs against other trading partners, in particular, Europe.  Japan and the US are also expected to begin trade talks this week.

Nevertheless, it is possible that a US-China trade deal will be agreed soon, both parties have claimed to have made considerable progress.  On Wednesday, US Treasury Secretary Mnuchin said that, “We’ve agreed that both sides [the US and China] will establish enforcement offices that will deal with ongoing matters.” This may be a sign that details are getting agreed upon and a deal may be close at hand.

The announcement of a deal might be expected to give global growth confidence a boost and lift risk assets.

Weakness in the EUR over the last six months, which accounts for 58% of the DXY dollar index, and is a major component of the CFETS Chinese currency basket, has probably contributed to broader strength in the USD.

However, the EUR ended this week higher notwithstanding a more dovish than expected ECB Press conference on Wednesday.  This appeared to helped turn the tide against the USD against other currencies on Friday.

On Wednesday, The ECB statement implied that the ECB would consider measures to mitigate the negative side effects of its negative interest rate policy on European bank profitability; such as introducing a tiered rate policy.  It also suggested that it might set attractive terms for banks in their forthcoming TLTRO(III) operations.  The implication for the market is that the ECB might consider a longer duration of its negative rate policy, or even lower the marginal policy rate further.

ECB Draghi seemed to endorse the market’s dovish interpretation by applauding its reaction to his speech on 27 March where he first raised the prospect of introducing mitigating measures.  The reaction on 27 March was to push down Eurozone rates and yields, weaken the EUR and boost Eurozone bank equity prices.

In his press conference on Wednesday last week Draghi said, the market reaction [on 27 March] “showed that the market understands that the ECB has plenty of instruments to deal with a weaker inflation outlook, and fully understand the ECB’s reaction function.”

It appears that Draghi was trying to massage Eurozone rates, yields and the Euro exchange rate lower in recent weeks, including during the ECB press conference last week, to enhance monetary policy easing.

However, the EUR fell only briefly during his press conference and ended the week higher. 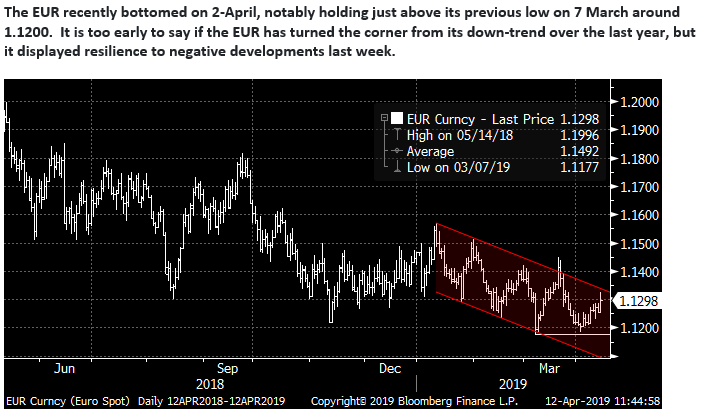 The ECB’s increased commitment to its negative rate policy is likely to weigh on the EUR for some time.  We wrote on 4 April that the market may be moving into a yield-seeking mode, most concerned with locking down yield, in a falling yield environment.  And this may be contributing to a weak EUR performance, and a stronger USD performance, even though US yields had fallen significantly further than EUR yields since November last year.

This may still be the case, and we would caution against expecting a sustained rebound in the EUR at this stage.  However, in the near term, it is possible that EUR rises if fears surrounding the global and European economy dissipate.  This may arise if Chinese economic activity is thought to be recovering and a US-China trade deal is agreed.

If the market moves from a yield-seeking mode to a high-beta-asset-seeking mode, capital may flow more readily to emerging market assets.  This may boost emerging market currencies, reinforce some broader weakness in the USD, and help drag up the EUR to some extent.

There is not a clear driver of the EUR.  On the one hand, it might be considered a growth asset, because its downturn over the last year has been driven by a weak export performance, and higher confidence in the global economy should translate into a rebound in Eurozone economic confidence.  On the other hand, it might be considered a funding currency for ‘risk-on’ trades due to a perception that the ECB is more committed to low rates for longer.

As such we do not see a big trend change in the EUR, but we note that it has held recent lows and may establish a more stable or firmer trading pattern in the near term.  A more stable to stronger EUR could help weaken the USD against other currencies.

Breaking the pattern of negative global growth news over the last week, Chinese trade and credit growth data on Friday gave risk assets a solid kick, contributing to the break higher in US and global bond yields from their recent range.  It boosted a range of currencies against the USD, including the EUR.

However, Chinese imports fell 7.6%y/y in March, below 0.2% expected.  So this should temper the positive vibe from strong exports, suggesting that Chinese businesses are not receiving a big pick up in orders from domestic and export markets to justify higher imports.  It suggests that the rebound in exports might overstate the underlying strength in global demand. 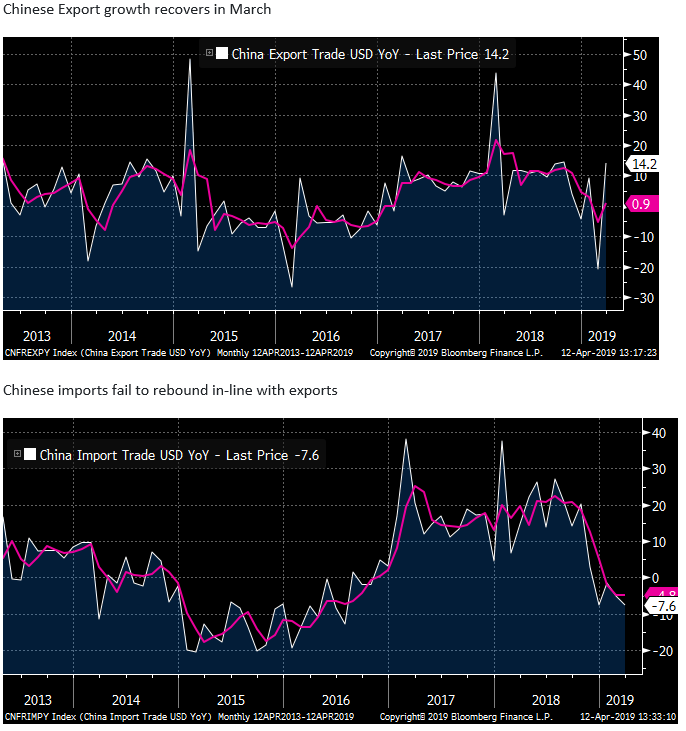 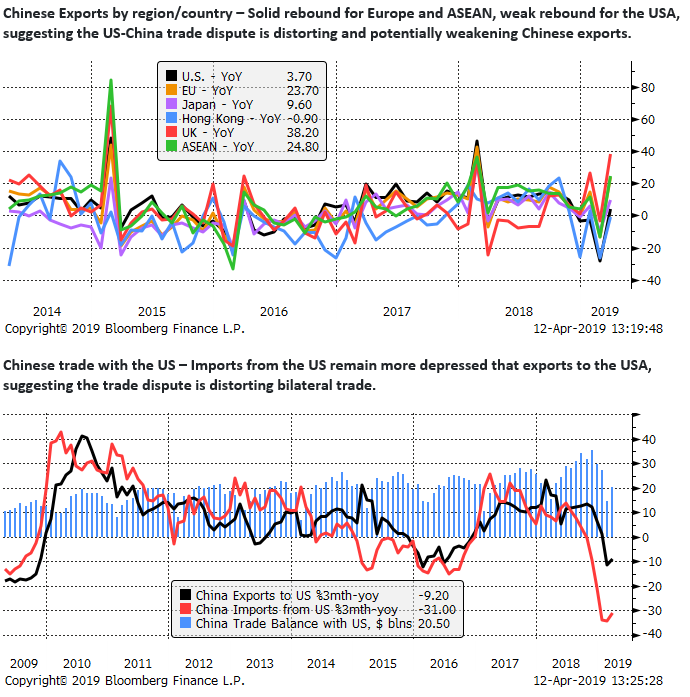 New total aggregate credit rose 40% 3mth/yoy in March; this follows a contraction of around 20% y/y in 2018 over 2017.  Note we are talking about the rate of change in new credit, not the stock of credit.

The data includes some modest expansion in the stock of shadow-financing sectors that had been contracting in 2018, and ongoing expansion in corporate bond issuance.

The data points to evidence that China has eased monetary conditions through the early months of the year to support economic growth in China; including easing off on its efforts to reign in shadow-banking sectors.  This is part of a broader stimulus effort including tax cuts and infrastructure spending. 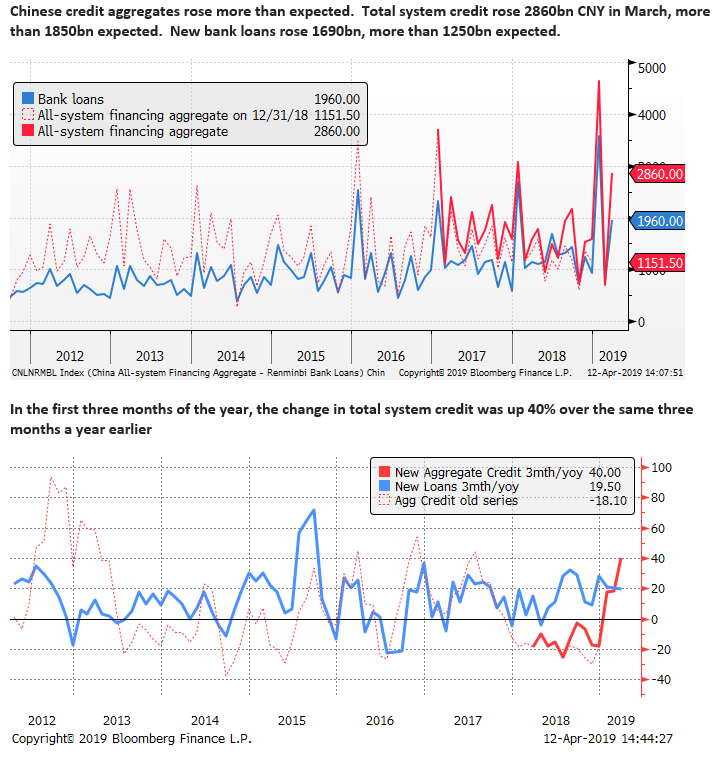 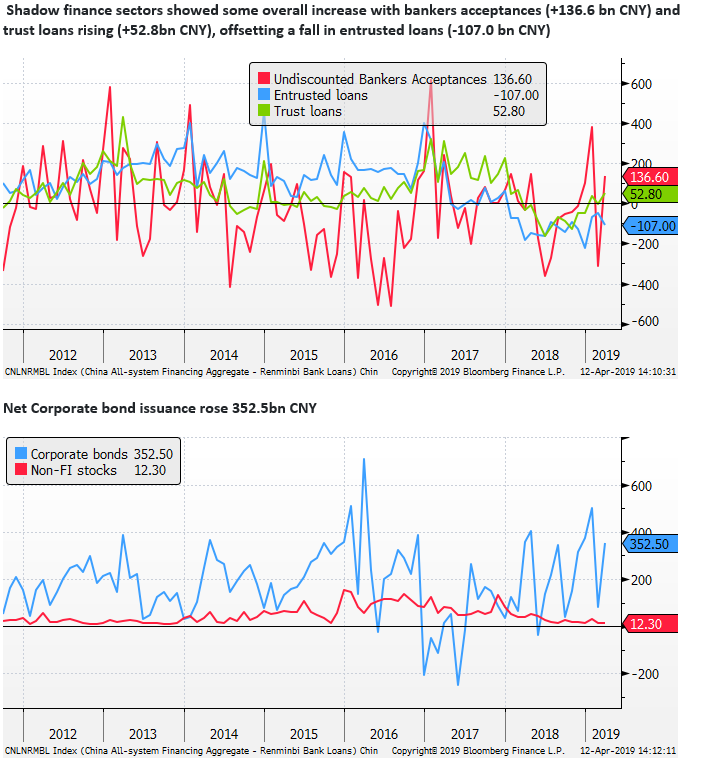 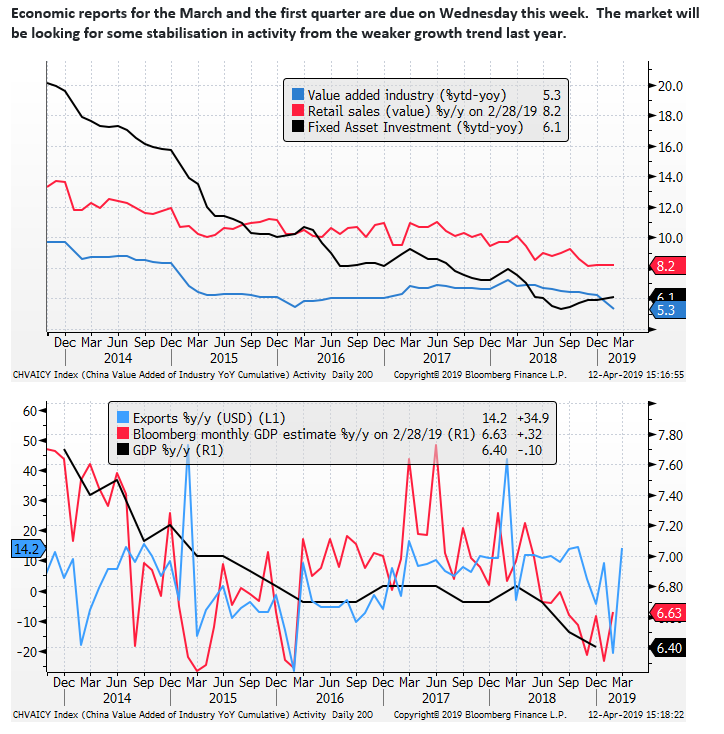 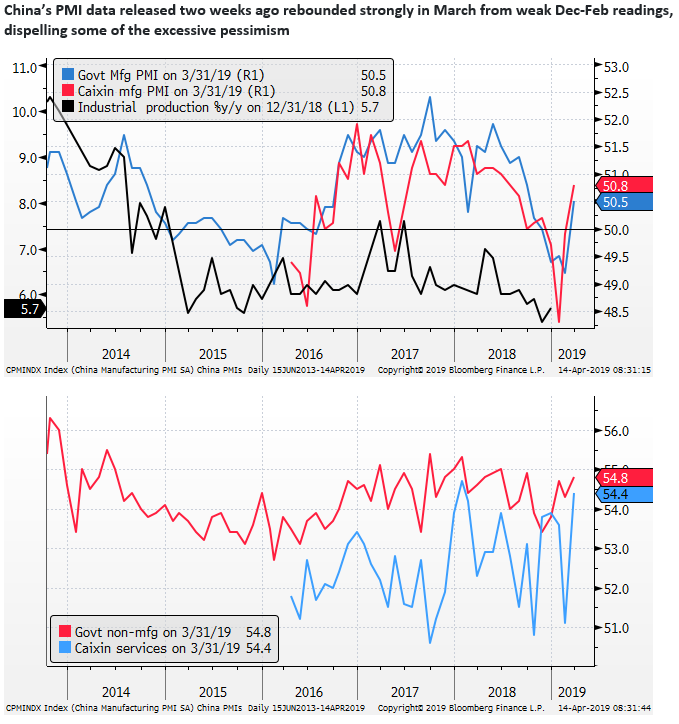