The USD remains mixed, but gold has developed a persistent uptrend.  This may reflect underlying weakness in the USD and doubts about the state of the global economy.  Its recent rise is at odds with the rebound in global equities, but consistent with lower global yields since the Fed moved to a stable rates outlook late last year.  Gold will face a significant test around its highs of last year, levels that have capped gold since 2013.  It may not be related, but it nevertheless noteworthy that Bitcoin may be showing signs of forming a base.

The relentless rise in the price of gold this year is a story in its own right that may be telling us something about the USD.

Gold was remarkable weak through August last year, despite widespread global asset market volatility, failing in its role as a safe-haven.  The USD was relatively strong through much of last year, which may have accounted for some of the weakness in gold.  But it should not have underperformed other safe-haven currencies like JPY and CHF.  At the time we wondered whether the demise of Bitcoin could have tarnished investor confidence in gold. (TRL for USD; exchanging one twin deficit and populist government for another; 15-Aug-18 – AmpGFXcapital.com).

Perhaps gold sank through to August last year because, despite steep declines in EM assets, the US equity market continued to climb until early-October.  Gold started to stabilize and show strength once the US equity market joined the rout.  It began to reverse its losses against other safe-haven currencies (JPY and CHF) in Q4. 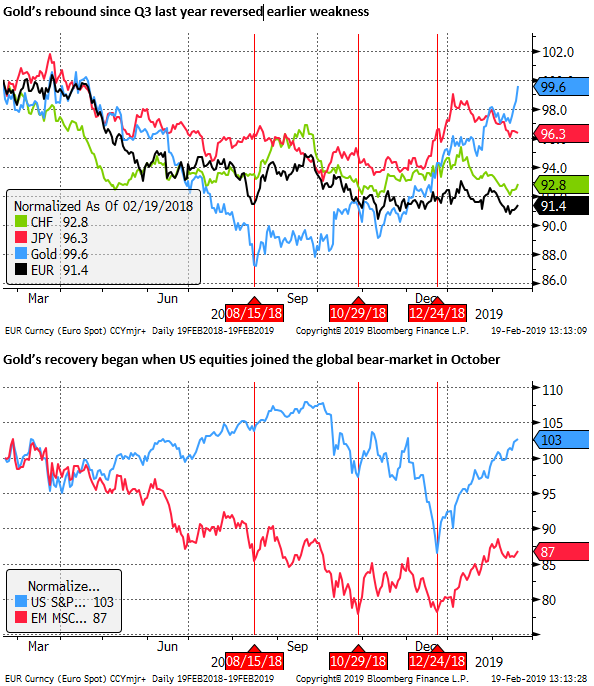 Gold has continued to rise this year despite the rebound in global assets; in fact, its gains have accelerated.  This seems at odds with its status as a safe-haven.  However, investor sentiment towards global growth does not appear to have rebounded with equities.  Many investors may view the rebound in equities as a correction from oversold levels last year rather than the start of sustained new bull-market.

Gold may be telling us more about underlying confidence in the value of the USD.

US yields peaked in November last year, about a month after the peak in US equities.  The Fed started shifting its tone on rates policy and continued to walk down its rates guidance through recent months.

This caused a modest correction in USD strength in January, but the USD has remained relatively stable given confidence in other currencies has also deteriorated.  However, investors may be expressing underlying concerns for the USD and switching more capital into gold.

Even though US and global equities have rebounded, US rates and yields have not.  Lower US yields, and less confidence in the USD, or any other currency, may be shifting demand to gold. 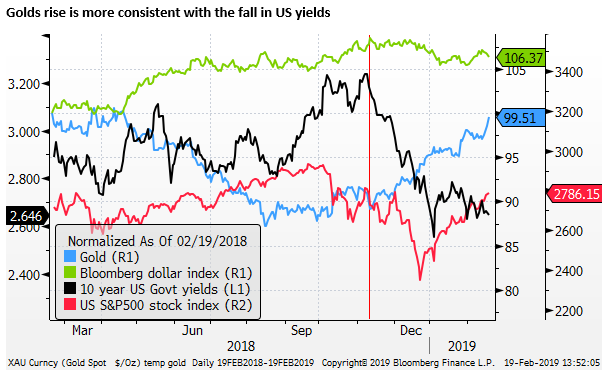 There are reasons to see a persistent rise in gold this year.  It has developed a rising trend that is bound to attract more investor interest.  The USD is likely to be challenged by a range of factors; including increased political uncertainty in the US, and concerns that fiscal stimulus in the US is past its peak impact on the economy.

A combination of lower global investor confidence and weaker confidence in the USD may continue to support gold, even if the USD overall remains mixed against other currencies.

Key resistance around the highs of last year

However, we also need to take a step back and acknowledge that gold was surprisingly weak between April and August last year, and its rise over recent months largely reverses this earlier decline.  We should expect Gold to face a key test of its recent gains when it returns to its highs last year around 1355 to 1365. 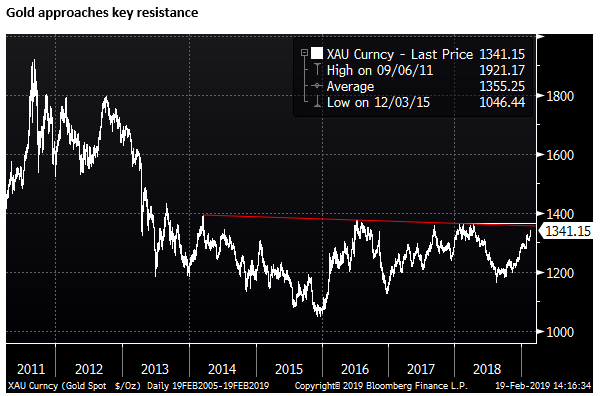 Cryptocurrencies have been showing signs of basing over recent weeks.  Cryptocurrencies have proven to be highly speculative instruments either highly maligned or enthusiastically touted.  We don’t want to get into a discussion over their evolving place in the financial world, but in the past, we have noted that Bitcoin has the potential to be viewed as a digital store of value, and thus exhibits many of the same attributes as gold. (Bitcoin – bubble or growing pains?; 30-Nov-17 – AmpGFXcapital.com).

As such, we retain an eye on its performance and note that has made a couple of steps up in recent weeks from a low in early-Feb that was above a previous low in December.  After its parabolic rise over 2016 and 2017, it has had a deep and lengthy correction over the last year. It may be ready to resume a rising trend that has been in place since its inception in 2009.  Time will tell, but we note that it appears to have broken a downtrend since November last year. 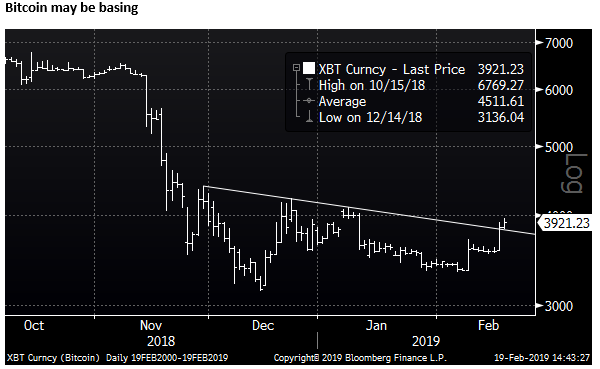 Taking a longer look at the chart, Bitcoin’s recent lows were close to a key level from 2017; the break-up level in August 2017 near 3000, a time when interest in Bitcoin started to really pick up ahead of the introduction of Bitcoin futures and a sense that the instrument might be entering main-stream financial world. That expectation has since cooled significantly, but it has not gone away.

We expect bitcoin to face significant resistance around 4920 its peak in September 2017, and then 5920 that was its base for much of last year before a significant further capitulation in late 2018.  More immediately, the market will be focussed on the highs in Dec and Jan in the low 4000s. 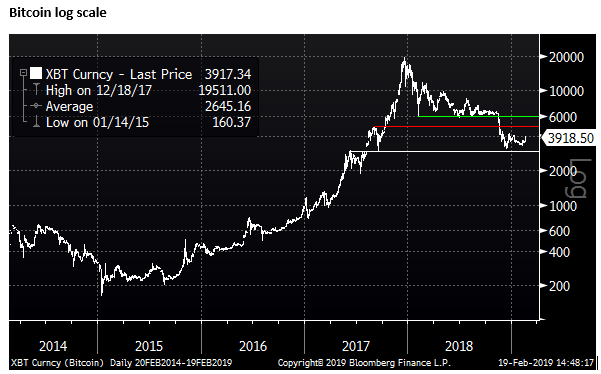