Pressure on the RBA mounts

The pressure is building on the RBA to cut rates as the construction data proves much weaker than expected in the second half of 2018; pointing to sub-trend GDP growth over the year ahead.  The RBA may cling to their outlook for stable rates, for the time being, citing recent strength in the labour market, and hopes of a rebound in infrastructure spending. But they will feel the heat as market commentators bay for their blood if the economy continues to struggle through the year.  The relatively weak AUD appears to be reflecting the heightened concern over the weak housing market, but it remains difficult to short, considering the potential for a US-China trade deal, Chinese policy stimulus, rising confidence that the UK will avoid a cliff-edge hard Brexit, dovish noises from the Fed, and stronger commodity prices and global risk appetite.

The chances that the RBA cuts rates sooner rather than later got a boost from much weaker than expected construction work done figures on Wednesday.  (-3.1%q/q in Q4, below +0.5% expected, revised down to -3.6%q/q in Q3 from -2.8%).

The data suggest that Q4 GDP data will be significantly weaker than the RBA’s implied projection and leave year-ended growth somewhat below trend.

The GDP report is due next week on 6 March, a day after the RBA monthly policy meeting and press statement.

GDP rose 2.8%y/y in Q3, down from 3.1%y/y in Q2.  The RBA February Statement on Monetary Policy (SMP) forecast 2.75%y/y in Q4. To achieve this result, quarterly GDP would need to rise by around 0.5%q/q in Q4.  This is looking like a tall order after the weak construction data reported on Wednesday.

In its February SMP, the RBA said, “Recent partial indicators point to firmer GDP growth in the December quarter resulting in year-ended growth of a bit below 3 per cent, which is a little above estimates of potential output growth.”

ABC News reported that, “UBS has cut it forecast to just 0.3 per cent — or 2.5 per cent over the year — but says that may still be optimistic the way recent data has rolled out.” (ABC.net.au).

Westpac economist Andrew Hanlan noted that “With the construction sector accounting for 14% of the economy, the 3.1% drop in Q4 subtracts around 0.4ppts from overall activity. However, these partials do not always translate to the national accounts estimates 1-for-1 (particularly when the falls are relatively large).” (FXStreet.com).

Economists will delve deeper into the data components to derive their projections, but the quick view suggests that it will shave a large chunk out of the GDP outcome (both in Q4 and the annual data via the revision to Q3); as much as 0.4% or even more, leaving the outcome well below the RBA projection and no longer running above the trend estimate for the economy.

RBA may hold the line for now

This might not immediately push the RBA to cut rates.  They may view some of the weakness in the construction data as a likely to reverse in coming quarters.  In particular, the sharp fall in public sector engineering construction (-10.3%q/q in Q4, -2.6%q/q in Q3), and the fall in private engineering (-1.3%q/q in Q4, -7.7%q/q in Q3), does not fit with the RBA narrative for strong infrastructure spending. 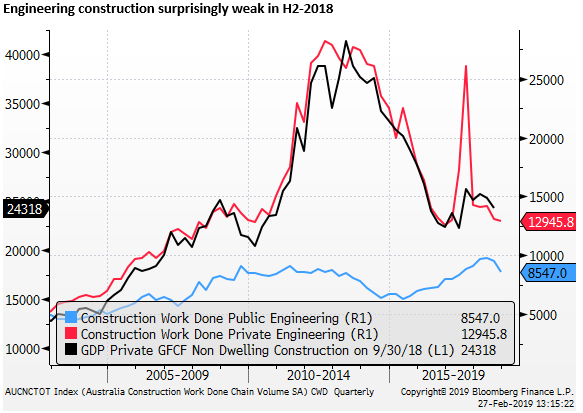 However, the market has become increasingly anxious about the state of the Australian economy, particularly relating to the risks in the housing market, and it is placing increasing pressure on the RBA to act by cutting rates; via bearish analyst calls and pricing in rate cuts.

A weak GDP outcome in Q4, will only reinforce market pressure to act and make it harder for the RBA to hold the line.  It must consider the broader risks to its forecasts, and the weaker starting point for GDP related to the construction sector will boost the case to move closer to easing rates.

The fall in residential construction (-3.6%q/q in Q4, -1.8%q/q in Q2), according to some analysts was also faster than they expected, although the RBA had acknowledged that the sector had peaked in the February SMP.

The RBA said, “A range of indicators suggest dwelling investment is around its peak for the cycle. The pipeline of work to be done remains very large, which should continue to support a high level of dwelling investment in the near term. However, the number of building approvals has been trending lower for more than a year to be around its lowest level since 2013.”

The RBA has often noted that work in the pipeline is high and the longer construction cycle in the apartment sector should help sustain growth for some time.  However, data suggests that the pipeline has peaked, construction has peaked, and approvals have fallen sharply, raising the prospect that residential construction is now declining and may accelerate lower in coming quarters, faster than the RBA appears to project. 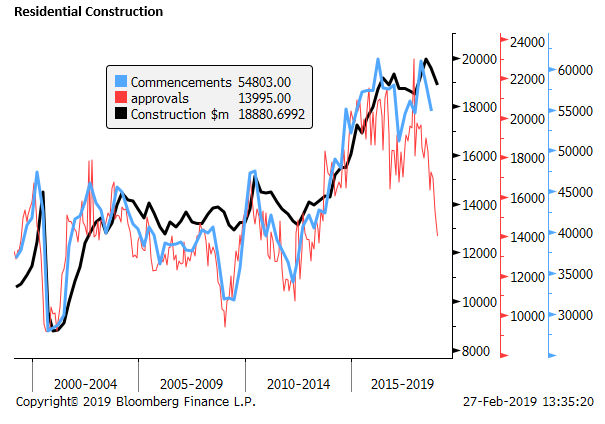 The RBA does not appear to hold much stock in the AiG PMI for construction, but it has deteriorated significantly from 57 in March last year to around 51 mid-year and around 43 in January this year.  The data may be warning that construction activity will remain weaker in the current quarter. 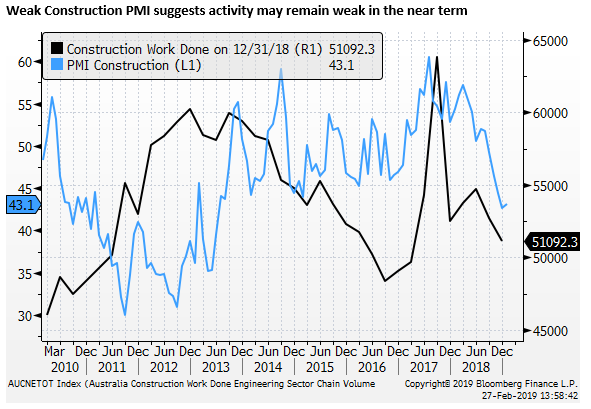 The broad-based weakness in construction in the second half of last year is one part of the story.  The bigger concern for the RBA and the market has been weaker household consumption growth over the last year. It was revised down significantly in Q3 GDP data (2.5%y/y in Q3), and the partial indicators for Q4 retail sales point to further weakness in Q4.  The RBA has acknowledged that the downturn in the housing market and ongoing below long-run trend growth in wages growth pose downside risks to their forecast for consumption. 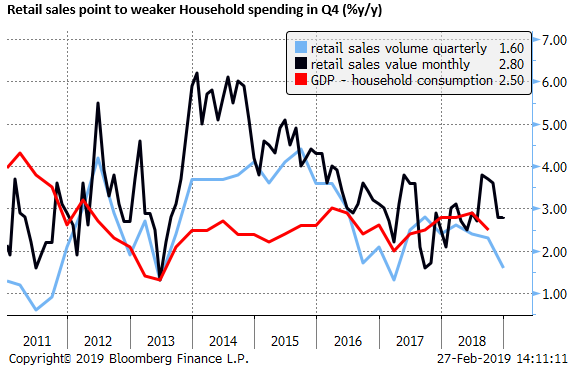 A factor that may keep the RBA from cutting rates soon is that the labour market data has remained robust, showing even some acceleration in job growth from the middle of last year, and a fall to a cyclical low in the underutilisation rate.  Job ads have ebbed from their high, but vacancy data remain elevated.  The data suggest that the underlying strength in the economy is stronger than recent softer GDP data may indicate.  Strong employment growth might also be expected to help underpin household income and consumption growth.

The capital expenditure survey that will supplement the construction work done data out on Wednesday will be watched for more clues on the outlook for business investment, including data on machinery and equipment investment and projections for investment over the coming year.

The weak construction data didn’t appear to place much additional downward pressure on Australian rates expectation.  But the market has moved to price-in 25bp of cuts over 12 months and 4bp on cuts over three months.

If the RBA does decide to provide more monetary stimulus, judging by experience, they are likely to be decisive and deliver two rate cuts over a few months.  As such, there is room for rates to fall significantly further in the event that the RBA signals an easing bias. 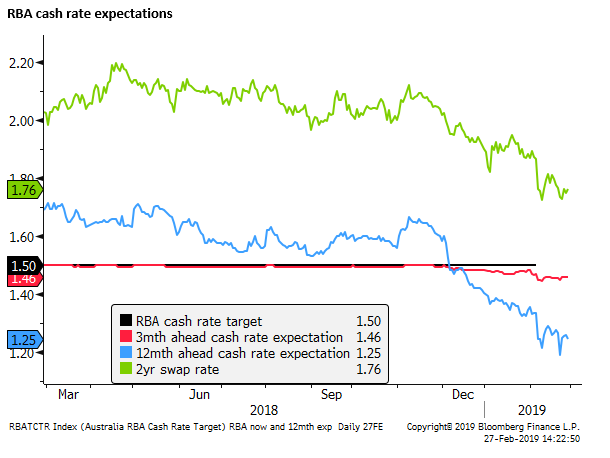 The AUD has responded to the higher odds of rate cuts, but it is hard to trade on domestic factors alone when a potential US and China trade deal, Chinese policy stimulus, rising hopes of a less-bad Brexit, dovish noises from the Fed, stronger commodity prices and global risk indicators may combine to push the AUD higher.

Nevertheless, the bearish sentiment around the Australian property market appears to be emboldening bearish calls for the AUD and rate cuts, and the AUD is indeed struggling to respond to global factors.