Trump’s tweets may be tactical, but his administration has demonstrated a willingness to use tariffs to reset trade relations and for broader domestic and geopolitical objectives.  Unless there is a clear backlash on the US economy and US equities, we should expect the Trump administration to keep pushing the envelope on trade relations.

The market is leaning slightly against an RBA hike later today.  We think the RBA should cut to send a clear message that its inflation target still matters and to address a sharp fall in inflation expectations in the last six month. As such we do expect them to cut.  In any case, they will probably express an easing bias.  We don’t see as much urgency for the RBNZ to cut on Wednesday, but if the RBA go, the RBNZ is likely to follow.  Either way, the pressure for lower rates, the relative strength of the US economy, and weaker global growth trends suggests downside pressure remains on both AUD and NZD.

Asset markets had arguably priced in a positive scenario for the US-China trade talks and were becoming more comfortable with the global economic outlook, even though several global economic indicators remain quite weak. 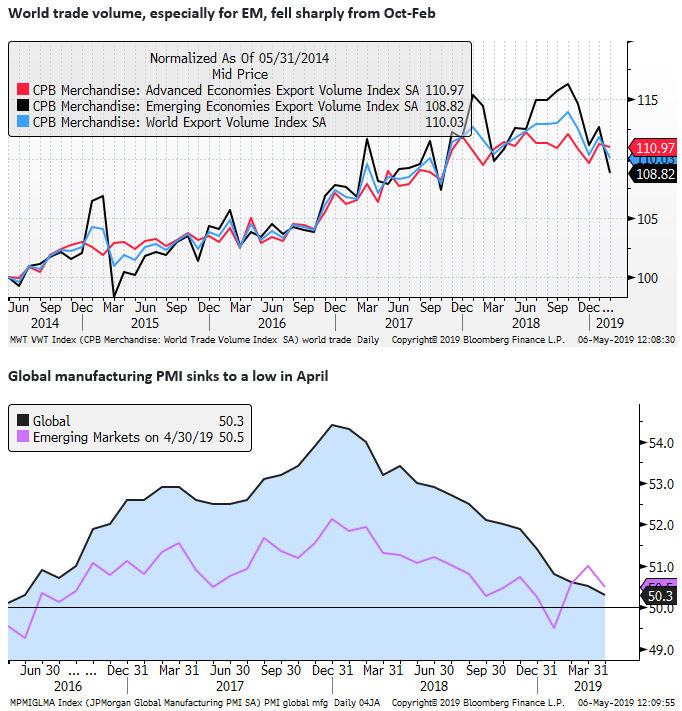 As such, there is a significant risk of a deeper asset market correction and a risk-off market response if the market feels that US-China trade negotiations will be delayed significantly, and in general, are more fraught with the US also in negotiations with Japan and Europe, and USMCA yet to be passed by Congress.

There is a suspicion that this is an eleventh hour Trump negotiating tactic, or grandstanding for the electorate, and a trade deal is still relatively close at hand.

There is none-the-less the possibility that there are sticking points that are preventing a deal from getting over the line.

Uncertainty remains high, and the risk of serious disruption to supply chains has increased.  This has trimmed global business investment and trade flows since last year.  An escalation of trade tensions may prolong the dampening on global activity.  In the worst case scenario where a trade deal falls apart, and tariffs are extended and increased, global growth confidence and asset market could fall sharply.

If the renewed tensions dissipate quickly and a trade deal is forthcoming within weeks, asset markets may resume their improving trend this year, but the upside potential is probably not as large as the possible fall in asset markets if tariffs appear set to be ramped up.

Currency market reaction to the Trump tweets over the weekend, directionally, are consistent with the risks to global growth and asset markets, but they are not all that large at this stage.  The kneejerk reaction has been to sell Asian currencies sensitive to global trade, and weaker commodity currencies sensitive to global growth.  EUR is also somewhat weaker, reflecting its high sensitivity to trade and uncertainty around US-Europe trade negotiations, and alternative safe havens, JPY and gold, are stronger.

The FX market has been choppy, and investors lack confidence in this space, generating a lack of conviction.  Price action may largely reflect short term trader activity that can be quickly reversed on headlines, making it difficult to interpret underlying themes. 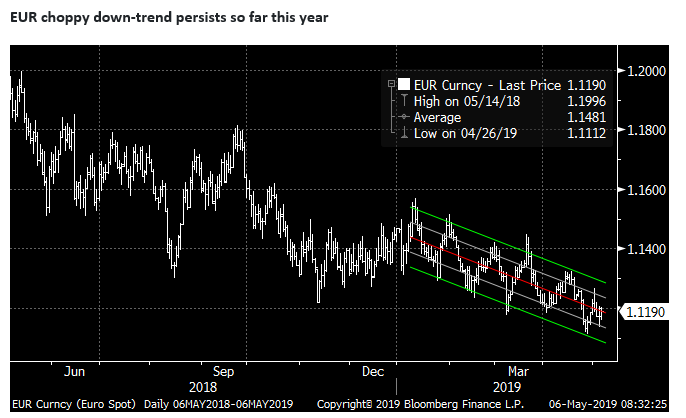 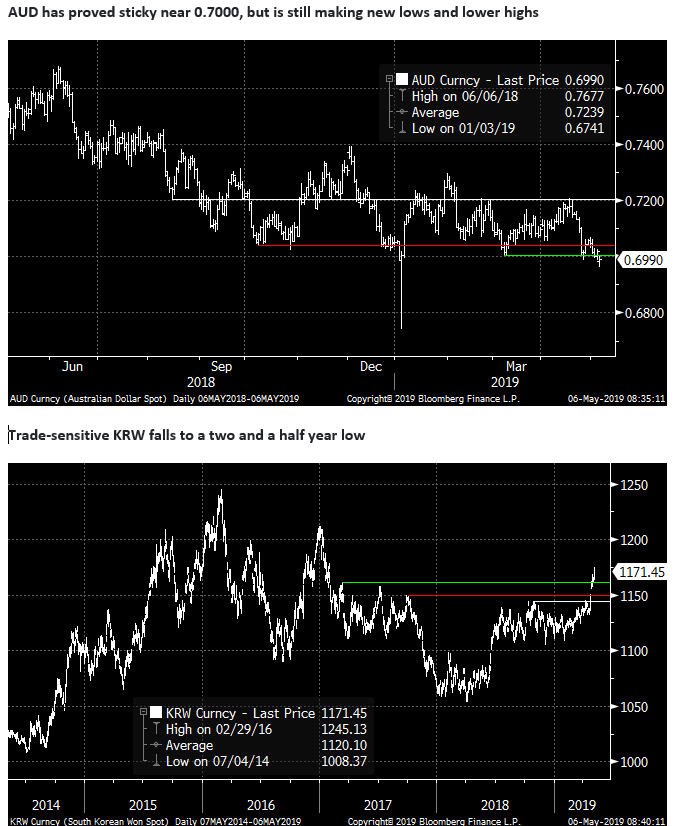 As yet there has not been a big negative reaction in most emerging market currencies and assets.  But two of the most troubled emerging markets, Turkey and Argentina, have been under renewed downward pressure in recent months.  They may be considered to be the soft under-belly of risk assets globally, and their renewed weakness suggests there is an increased risk of broader global risk aversion. 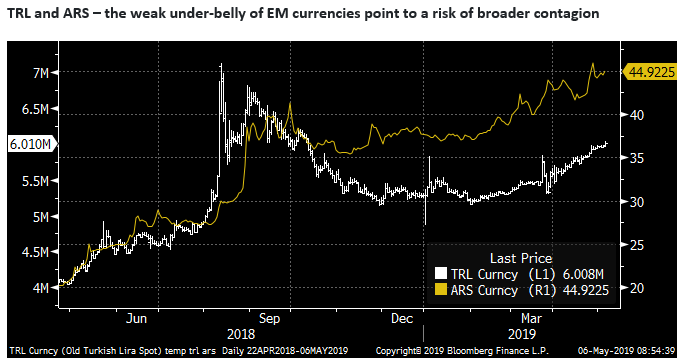 There have been 20-odd tweets by President Trump since the weekend covering a range of topics; several on the Mueller report and allegations of a Democrat/Obama/FBI conspiracy against the Trump campaign and presidency.  Politics in the US has become a very dirty affair of claim and counterclaims of deep state conspiracy.  This is largely being treated as a sideshow by the markets; entertaining, smokescreen, alarming, but the new normal and best ignored.

Within that Trump made three tweets on the trade negotiations with China.  The first two over the weekend combined for the one extended comment below:

“For 10 months, China has been paying Tariffs to the USA of 25% on 50 Billion Dollars of High Tech, and 10% on 200 Billion Dollars of other goods. These payments are partially responsible for our great economic results. The 10% will go up to 25% on Friday. 325 Billions Dollars of additional goods sent to us by China remain untaxed, but will be shortly, at a rate of 25%. The Tariffs paid to the USA have had little impact on product cost, mostly borne by China. The Trade Deal with China continues, but too slowly, as they attempt to renegotiate. No!”

This does appear to be something of a negotiating tactic.  Trump is making threats of significant tariff increases if a trade deal fails.  He also argues that the tariffs are “partially responsible for our great economic results.”  And that the tariffs have “had little impact on product cost, mostly borne by China.”

This sounds like the USA has nothing to lose from higher tariffs and China will bear the cost.  Many would disagree that the US economy has benefited from the trade spat; it may be true that the US economy has done relatively better than China and other trade sensitive countries, but its economic activity has appeared to lose momentum as well despite its large fiscal stimulus over the last year.

Perhaps the president has felt emboldened to make threats given the US stock market has rebounded to new highs this year.  However, the swoon in US equity markets in the final months of last year reflected in part fears of a trade war dragging the US economy down with the global economy.

This may be a negotiating tactic, but it is one that appears to be in response to a stalling in trade negotiations around contentious details.  Trump said, “The trade deal with China continues, but too slowly, as they attempt to renegotiate.  No!”  This sounds like the two sides are struggling with the final details.  If so, we should not expect a quick resolution.

Trump’s sound bites might be alarming, but the trend in past negotiations, including the USMCA and US-North Korea exchanges, suggests that the rhetoric can swing wildly from negative to positive.  If a trade deal is done it will no doubt be “historic, the best ever, and a great step forward”.

The market is getting used to cutting through the rhetoric, and not over-reacting to it.  As such, the market will remain cautious in both directions; both reluctant to price in a full break-down in trade relations, and cautious not to presume trade relations will improve on a lasting basis if the US and China agree on a trade deal.

The Trump administration did impose significant tariffs on China and strategic industries, steel and aluminium, washing machines and solar panels. Trade deals are proving slow and contentious to negotiate.  Trump’s rhetoric may be bombastic and hard to believe at face value, but his actions suggest that he is serious on resetting trade relations and using trade policy for broader domestic and geopolitical objectives.  Unless there is a clear backlash on the US economy and US equities, we should expect the Trump administration to keep pushing the envelope on trade relations.  As such, trade tensions might keep global business confidence contained, weigh on the global economy, and ensure the risk of a deep correction in global asset markets remains significant.

RBA and RBNZ in the hot seat

The market will closely watch the RBA rate decision later today and the RBNZ on Wednesday.  Both currencies opened this week lower on the renewed trade tensions.  Presumably, the staff recommendations to the boards are already printed and sent to board members.  So the trade spat should not make a big difference.  At the margin, however, the tensions should reinforce a sense of risks for global growth, and embolden voices for rate cuts.

The rates market is leaning slightly towards no cut in Australian today (45% probability of cut is priced-in to cash rate futures).  However, slightly more surveyed economists on Bloomberg expect a cut (15 out of 29).  Possibly leaning the betting against a cut, only one of the big four Australian banks (ANZ) is calling for a cut.

However, most anticipate that if there is no cut, the RBA will establish a clear easing bias in the statement.  Most of the reasons for not cutting at this meeting appear tactical (not willing to interfere with the election, not wanting to appear panicked about the state of the economy, still seeing strength in the labour market).

As we wrote last week, we think that the RBA should cut to send a clear message that its inflation target still matters, to respond to a significant fall in inflation expectations over the last six months.  A range of global and domestic indicators have lost momentum, and the housing market remains in a weaker trend.  As such, there seems little risk of moving ahead with easier policy at this juncture.

An RBA rate cut next week is the smart move; Fed firmly on hold; 2 May – AmpGFXcapital.com

As such, we lean towards a cut being delivered later today.  The AUD has been sticky around 70 cents, but a lower rates outlook, risks to the global and domestic economy, and renewed trade tensions suggests that the AUD should retain a falling trend for the time being.  Even if the AUD bounces on a no-rate move today, its upside should be limited.

The latest market pricing for the RBNZ rate decision is a 49% probability of a rate cut.  The Bloomberg Survey of economists shows a significant majority of 14 out of 20 calling for a cut.

The calls for RBNZ to cut are a little more certain mainly because the RBNZ policy statement in March had already stated a clear easing bias.  The RBNZ under Governor Orr has adopted a more dovish attitude than the RBA since last year.  It is perhaps less clear that the RBNZ needs to cut at this juncture, but after several years sub-target inflation, Governor Orr, that took the reins just over a year ago, appears more eager to lift inflation.

Underlying inflation trends are still rising, and the RBNZ target for inflation (mid-points of 2%) is actually a bit lower than for the RBA (mid-point 2.5%). 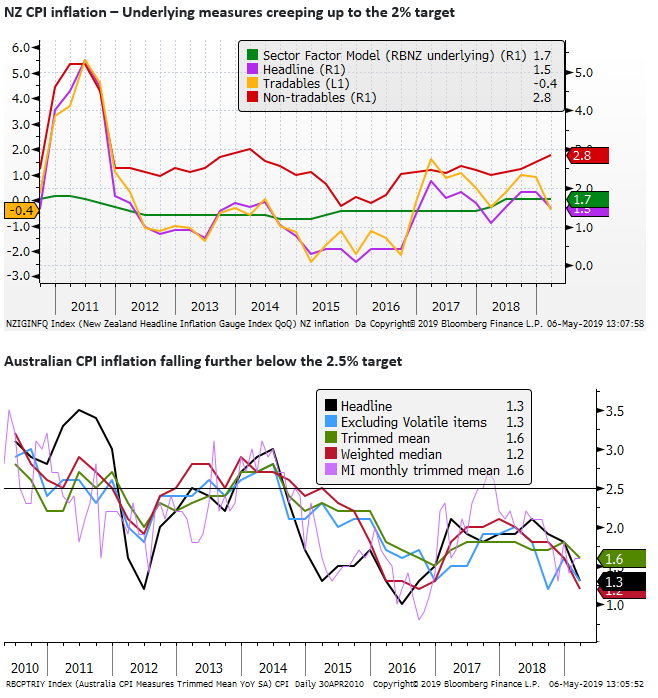 Nevertheless, momentum in the NZ economy appears to have slipped to at or below trend.  The most recent employment data for Q1 showed some weakness.  It is hard to say if this is a new trend, but the broader picture from global and domestic data is that activity has moderated and is not generating the inflationary pressure desired by the RBNZ.  Furthermore, private sector underlying wage growth appeared to lose momentum in Q1.

If Orr was in a mind to cut rates since March, the incoming data might have been just enough to push him over the line without demanding immediate action.  We are less sure that the RBNZ needs to cut rates, but the likelihood that the RBA will cut rates may be enough in itself to push the RBNZ over the line.

Perhaps Orr has been using back channels to the RBA to find out if they are going to cut rates this week.  If the RBA cut, it is likely to lift the odds significantly that the RBNZ follows.