The US equity market was running with an optimistic assessment that there is a Trump and Fed put, that a trade deal and Chinese policy stimulus would generate a recovery in the global economy and the US economy was largely immune to a slowdown in activity abroad. However, the tariffs have been increased, trade talks have stalled, and the US has rolled out bans on Chinese tech companies.  The evidence grows that there is a structural rift in US-China trade relations. The rebound in Chinese economic activity in March was not backed up by data in other Asian exporter nations or Europe through April.  Chinese activity data slumped again in April, and the latest PMI data in the Eurozone, Japan and the USA for May are weak. Oil and copper prices have turned lower, suggesting that industrial activity remains weak.  We continue to see downside risk for still elevated US equities.  The strength in the USD to date is contributing to downward pressure on US equities.  The gains in the USD may have become over-extended.  China may pursue a more stable CNY for a period and lower US yields should support safe haven currencies, JPY, CHF and gold.

High stakes Huawei gamble a weight on US and global equities; 21-May – AmpGFXcapital.com

The US equity market remains relatively high, after its strong rebound earlier this year.  Global yields have fallen significantly and more accurately reflect the weaker global economic trends since last year.  The Fed is unlikely to quickly react to weaker asset markets, with financial conditions still relatively benign and US economic activity holding up relatively well; this was consistent with the message from the Fed minutes.

The USD is relatively strong, in part due to the Brexit chaos and EU political uncertainty into the EU parliamentary elections.  The break down in trade negotiations between the US and China since early May sent Asian currencies significantly lower.  The strength in the USD further weighs on US equities. 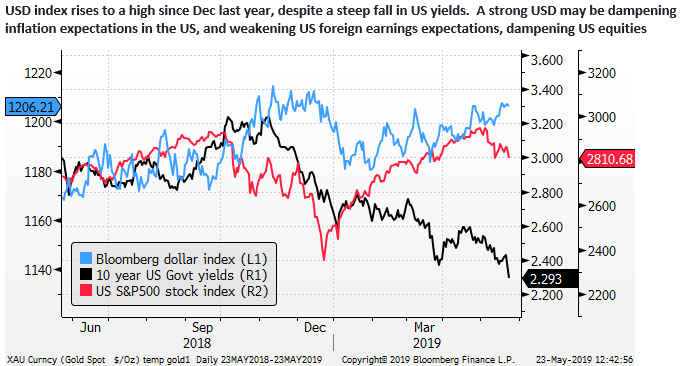 The equity market had been running with a relatively optimistic view of the trade dispute.  The narrative developing, especially after the rebound in March Chinese economic data was that a trade deal would be struck and Chinese policy stimulus was kicking in. This would generate a global economic recovery and drive further gains in equity markets.

There was also a narrative that the equity market had both a Trump and Fed put; whereby if the equity market fell, Trump would ease off off his harsh trade rhetoric and be more willing to strike a deal with China, and the Fed would be prepared to cut rates.

However, Chinese economic data soured in April.  It appears that the US tariffs already at 25% on around 50bn worth of high tech sectors and 10% on around $200 bn since last year were disrupting global trade, among other factors (weaker auto and IT demand).

Other Asian exporter trade and activity data, and European data did not match the rebound in Chinese economic activity reported in March.  The slip back in Chinese economic data in April was more consistent with the global trend and appears to reflect the true underlying trend of persistent slowing in the global economy, despite the Chinese policy stimulus. 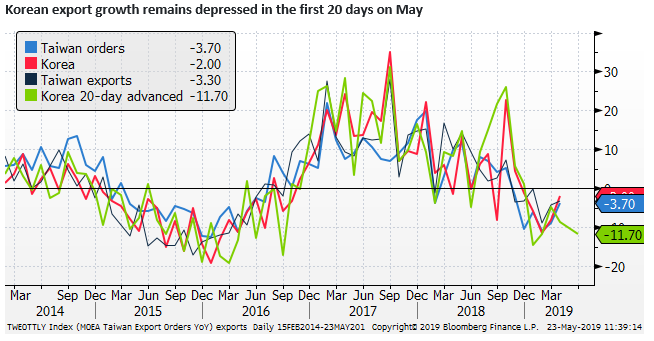 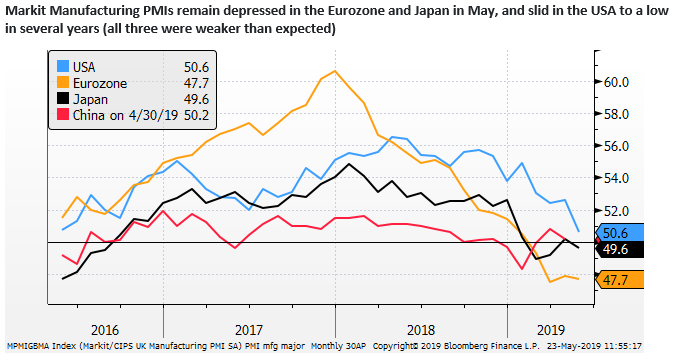 The market was over-estimating the evidence of recovery in the global economy.  The break down in trade negotiations in recent weeks has further increased tariffs on around $200bn of goods from 10% to 25%.  The tariffs in place are significantly broad and punitive and are having a real impact.  It is becoming much harder to look ahead to see a time when they may be removed and the global economy will rebound.

Arguably, already permanent damage has been done in trade relations between the US and China.  Even if trade negotiations resume, the market should doubt the durability of a possible trade deal, and there may be more permanent shifts in supply chains and Chinese demand for US products and services.

We would never doubt the capacity of the US equity market to rebound on any sniff of easing in trade tensions.  There are still hopes that a Xi-Trump meeting at the G20 summit on 28/29 June will reignite trade talks.  However, investors should remain more permanently cautious on the US, Chinese and global economy, and display medium term caution towards US and Chinese equities.

The viewpoint that it was in the interest of both the US and China to strike a trade deal, and therefore one will get done sooner or later is being more seriously questioned.  The break down in trade negotiations appears to be in the area of enforcement and the US demands for China to make changes to its laws.  This was a bridge that China was not prepared to cross and speaks to a lack of trust between the two parties.  As US officials said, a deal was 90% agreed, but the last 10% was the hardest part.

In the wake of the breakdown in trade negotiations, the US has launched tough restrictions on trade against Huawei and other Chinese tech companies on the grounds that it threatens security in the USA.  Reports from Bloomberg suggest that the US administration was holding back these moves because they thought they would disrupt trade negotiations.

Now that they have been launched they disrupt the resumption of trade negotiations and reduce the chances that a deal will be struck, and will lessen the trust in any deal if one is struck.

The fact that the US administration has taken these steps against Huawei suggests that they were planning to take them even if a trade deal had been struck.  They suggest that apart from the broader goals in a trade deal, the US administration is eager to protect its long term position in what it sees as the most important future industry for the global economy, and counter the rapid advancement on China in high tech sectors.

It is possible that a trade deal may be struck at some point in the future, but the US administration may have revealed its hand that it wants more permanent protection of its IT sector and to seek specifically to curtail the advancement in Chinese tech sectors in the global economy.  Trade deal or not, it is hard to not see the US and China in a more permanent adversarial position.

In the meantime, the risk has increased that a trade deal remains elusive and the US administration responds by further extending its tariffs to all Chinese imports as they claim to be planning.

The tariff policy is causing disruption in supply chains.  The uncertainty is dampening business investment.  It is likely to result in a backlash against USA companies with sales and operations in China.  It threatens to weaken demand significantly in the Chinese economy and reduce its demand for consumer imports.

The evidence to date is that global trade and manufacturing have weakened in response to tariffs, so in the near, to medium term, we should continue to expect weaker manufacturing activity to persist, and possibly weaken further.  We should also worry that this will filter into service sectors that have remained resilient to date, and broaden and deepen a global economic slowdown.

The US economy to be dragged into the mess

The US has been resilient but not immune to the slower global trade and manufacturing trends to date.  It is likely to be less resilient going forward, especially if US companies are directly affected by Chinese retaliatory action, and the US equity market turns down more decisively.

We are today seeing some negative feedback to the USD.  The FX market remains difficult to call.  It may be the case that strength in the USD has become extended and over-done.

USD gains extended in recent weeks as the CNY weakened dragging down other Asian currencies.  However, now that USD/CNY is close to previous highs near 7.0, the Chinese government is wary of letting it slide rapidly further.  It may fear to generate capital flight if it were to let it slice quickly above 7.0, resulting in tighter liquidity and credit conditions at home, something they want to avoid.

A more stable CNY, at least for the time being, should remove some of the broader upward pressure on the USD. 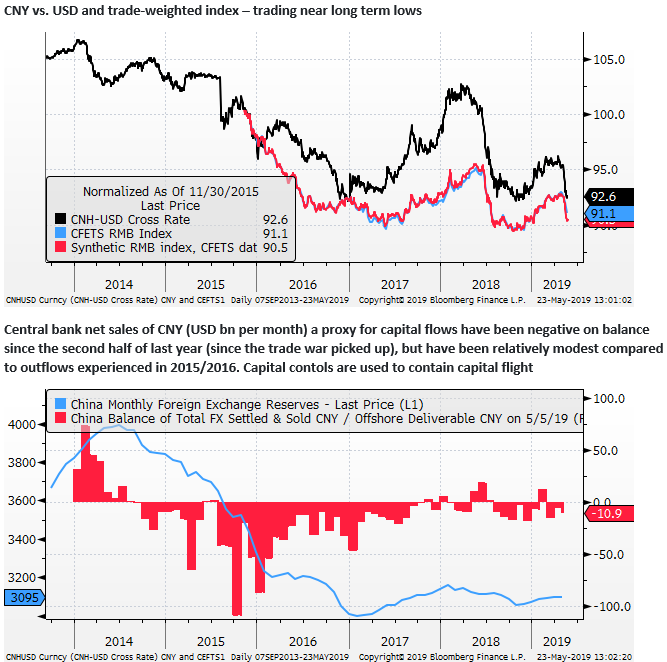 US bond yields have fallen more than most in recent weeks, reducing the USD yield advantage, especially against low yielding alternative safe havens, JPY, CHF and gold.  But also against the EUR which has some safe haven attributes, including a significant current account surplus.

The drag on GBP and EUR from Brexit chaos has probably also contributed to broader strength in the USD.  The outlook for GBP remains weak; it may slip further if a hard Brexiteer, such as Boris  Johnson, succeeds in taking the leadership of the Conservative party and becomes the next PM.

However, such a scenario is more fully priced into the GBP.  The market must also continue to weigh the odds that the thin Conservative hold on power and the majority view in parliament to avoid a no-deal Brexit will eventually force a fresh election and increase the likelihood of a new referendum.  As such, it is not clear that GBP will contribute to a weaker EUR and stronger USD.

We would be cautious of a counter-intuitive rebound in several key currencies against the USD (EUR, JPY, and CNY) driving a broader correction in USD strength.  The narrative that the US equity market and economy have more to lose from a trade war with China than first met the eye could take hold; especially if it is seen to bring Fed rate cuts more clearly into view.

However, the case for emerging and commodity currencies to sustain gains will be limited in a weaker scenario for the global economy.  The EUR upside may also be limited by its higher dependence on trade for economic growth.  The GBP retains significant downside risk.  As such, we largely remain ambivalent to the USD.

If the USD does begin to stabilise against CNY, Asian currencies and EUR, reflecting a more mixed outlook, we see greater scope for gains in JPY and gold on the basis that US yields have fallen and may fall further in a weaker equity market environment. 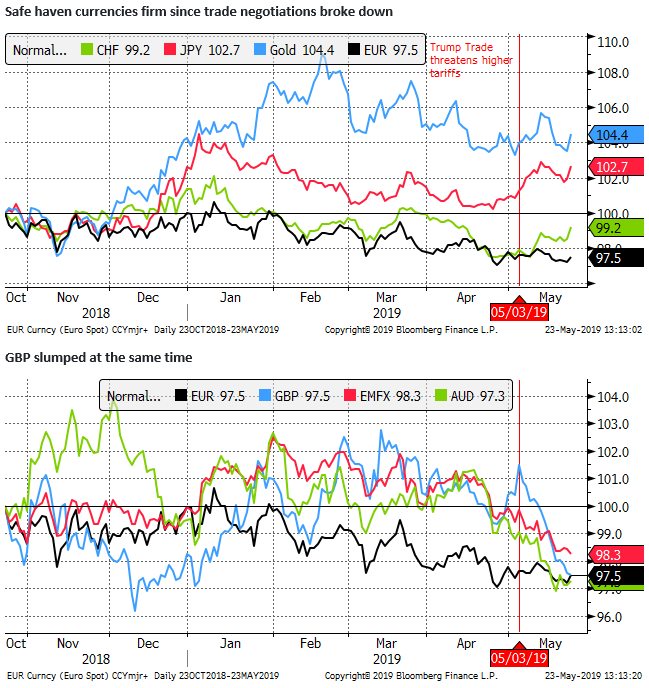 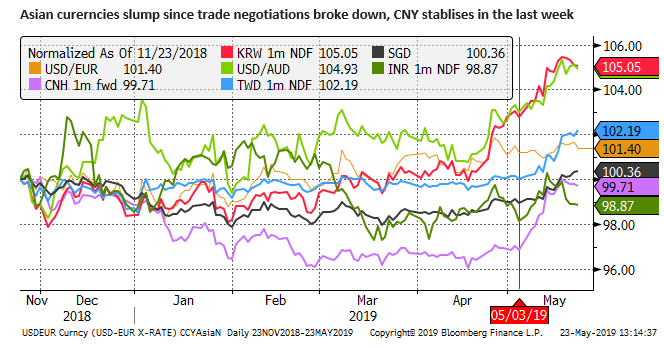