Time for a EUR reality check

The US economy has retained strong momentum, generally beating expectations, while the Eurozone economy has lost momentum and has consistently underwhelmed expectations over recent months.  The ECB said it has been monitoring strength in the EUR since January.  The evidence suggests that indeed EUR strength has contributed to weaker growth and is a problem for the ECB.  The EUR has fallen after the last four ECB meetings, as Draghi emphasised patience and warned of risks. The same appears likely this week. It may seem distracting to consider relative economic trends and rate spreads when the USD has suffered a big picture slump in confidence, but the background noise may no longer be drowning out the economic action at the front of the stage.

We have posited various reasons for the lack of positive reaction in the USD to US economic strength over the last six month.  Political uncertainty in the US has been one constant theme.  Another is stronger more synchronised global growth driving capital towards emerging markets.

A blowout in the US budget and twin deficits has featured in many analysts calls for a weaker USD.  The trade protectionist moves by the US administration have at times appeared to weaken the USD, perhaps on a notion that other countries could isolate the US from world trade.  A related thought was that a less globally engaged US could weaken the reserve status of the USD.

Through much of the last year, the market has been anticipating the end of QE in the Eurozone, and unwinding long held hedges of EUR assets as the region emerged from its crisis mentality. On the other hand, the market has been sceptical over the long-run growth outlook in the US, sensing that its policy tightening cycle might end within a year or so.

Several of these factors may continue to underpin some analysts longer-term bearish USD views.  However, on several fronts we see the tide, at least for now, turning back in favour of the USD.

The flow of capital into emerging market assets may have passed its peak.  Global growth indicators have moderated, and global asset markets have been much more volatile over recent months.  The ongoing tough trade rhetoric in the US, specifically against China, and a turn in sentiment in the high tech sector, are spreading uncertainty more clearly to emerging markets.

It may be the case that equity-related capital flows are now mixed and will play less of a role in overall currency direction.  This may shift focus back to interest rate differentials,  which have improved significantly for the USD against most currencies over recent months; accelerating again in the last week.

The market may have over-played its hand anticipating the end of QE in the Eurozone.  The ECB may need to extend QE again after September if the recent slowdown in the Eurozone economy persists.  Furthermore, the market may swing from seeing an end to QE as a positive for the EUR exchange rate towards a potential negative risk for EUR assets.

It appears that recent capital outflows from SEK, CHF and RUB may have supported the EUR, allowing it to divergence from weakening economic trends in the Eurozone.  SEK is now extraordinarily cheap, CHF is back to near the crucial 1.20 level, and the US has backed away, for now, from further sanctions against Russia.  These recent additional flows supporting the EUR may have peaked.  We discussed these themes in our report earlier this week.

Political risk in the US remains high and may increase towards the mid-term elections in November.  The Mueller investigation hangs over the US government.  However, Trump has appeared more decisive and confident in recent months, and this may be starting to pay dividends.  His poll numbers are still dismal, but his trade policy agenda appears to be gaining acceptance in policy circles in the US and cracking the doors open to more access to Chinese markets, even if the risks to global growth remain elevated.  He has made progress in dealing with North Korea.

Global leaders are still lining up to smooch with Trump, including Macron and Merkel this week.  The notion that the US is withdrawing and becoming more irrelevant, descending into an internal crisis of government, diminishing the reserve status of the USD, is no longer sucking confidence out of the currency.

Trump is more assertive in his global agenda, including toward Korea, Syria, Russia, and Iran.  This may, on one hand, appear to raise geopolitical risks, while on the other restoring some lost status in the USD as a safe haven.

With this in mind, we think the market may shift attention back to relative economic trends and interest rates.  These have improved markedly for the US in recent weeks.  This is perhaps surprisingly in light of the weakness in global equities but is consistent with still robust US economic indicators.

US manufacturing holds up as Euro and others falter

Hard data trends favour the USD.  US manufacturing production rose 3.0%y/y in March, rising above the pace of growth in all other major economies for the first time since 2016.  US growth hit a new cyclical high in March; others have slowed. 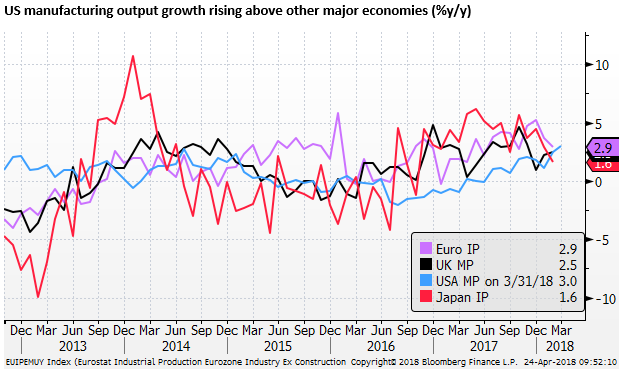 Some of the US regional surveys declined in April.  However, the Markit national preliminary index rose to a new high in at least the last three years (of available data on Bloomberg).  By this measure, part of the global suite of Markit PMIs, US momentum has moved above that in the Eurozone for the first time since 2016.  This also moves the USA (56.5) ahead of the UK (55.1), Japan (53.3) and Canada (55.7). 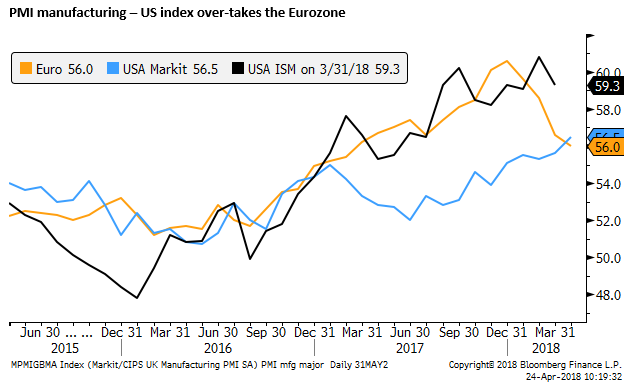 US Durable goods orders are released on Thursday.  The strength in manufacturing indicators suggests that this data should also be strong.  Core capital goods orders rose 7.7%y/y in Feb. 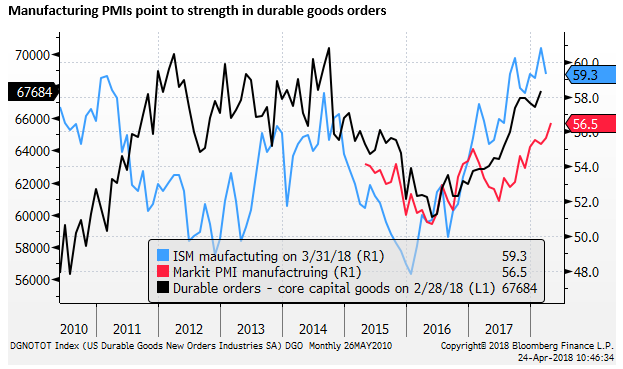 Services PMIs slow in Eurozone, hold up in the USA 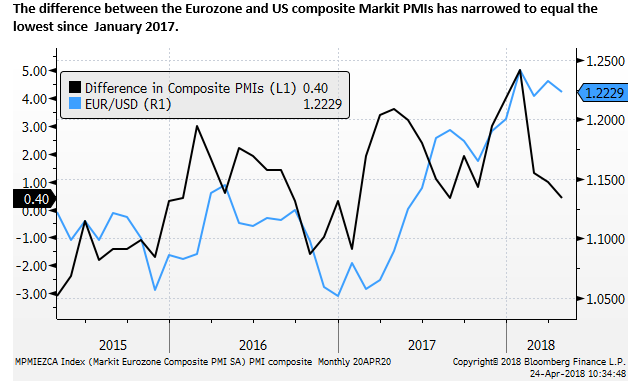 The Conference Board Leading indicator and Chicago Fed National Activity indices suggest US growth momentum remains well above trend, by around its highest margin since the 2010 (the initial bounce out of the Great Recession in 2008/09). 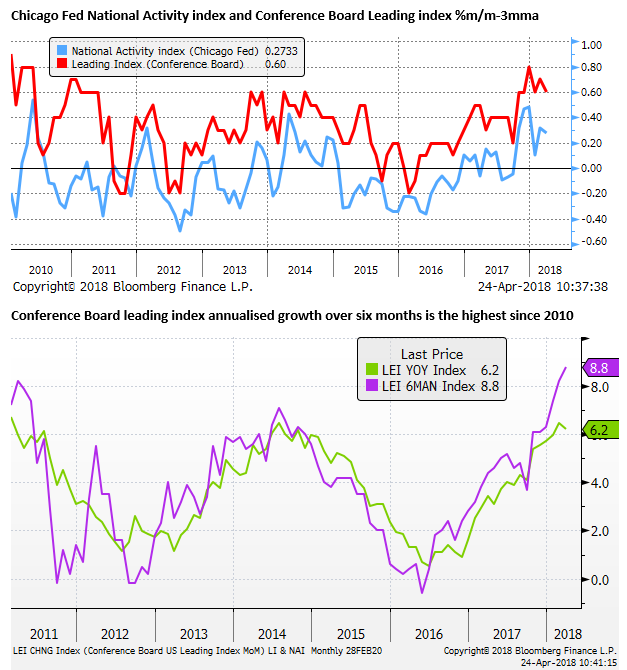 The German IFO survey released on Tuesday continued the recent pattern of weaker than expected survey data.  The expectations component has led the recent fall.

The US is one of the few countries that has been consistently beating economic forecasts over recent months.  The gap between Eurozone and US economic surprise indices is at its widest since 2008.  While there is barely a relationship between economic surprises and currency performance, it is surprising that such a wide and sustained divergence in the change in economic momentum has not done more to weaken the EUR/USD exchange rate.

On Friday, US Q1 GDP is released,  partial indicators point to a moderation in Q1 from the very strong finish to last year ( 3.2% SAAR In Q3 and 2.9% in Q4).  Q1 has been below trend in four out of the last five years and has been said to reflect “residual seasonality”.    It may also reflect more severe weather patterns that have battered part of the country in the winter.  The market forecast is for a 2.0% SAAR increase.

This is consistent with the Atlanta Fed GDPNow forecast of 2.0%,  However, ‘Nowcasts’ by two other regional Federal Reserves (The New York Fed’s 2.9% and the St Louis Fed’s 3.5%) suggest upside risk to this outcome.  The higher nowcasts from these other surveys reflect their inclusion of sentiment and business surveys (so-called soft data). 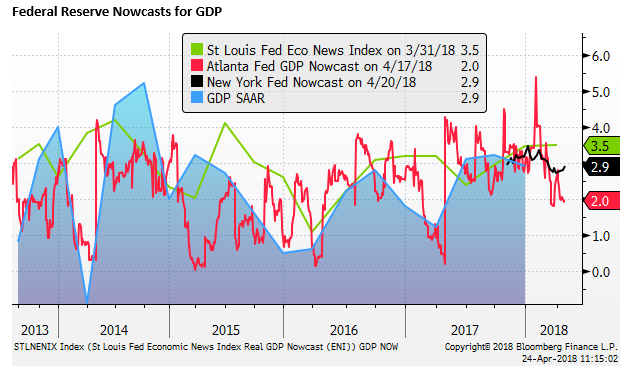 ECB to retain a dovish tone

With the ECB meeting this week, it is worth noting that the EUR has ended the day lower after each of the last four ECB meetings since October last year.  The ECB has been trying to cool the market’s heels eager to price-in the end of its QE policy and the beginning of rate hikes.  As such, the Draghi press conference has tended to emphasise dovish elements, while still expressing more confidence that inflation would return to target over time.

In January, the ECB first commented on the strength in the EUR generating risks for its inflation outlook.  It said, “The recent volatility in the exchange rate represents a source of uncertainty which requires monitoring with regard to its possible implications for the medium-term outlook for price stability.”

In March, Draghi said, “the Governing Council will continue to monitor developments in the exchange rate and financial conditions with regard to their possible implications for the inflation outlook.”

It should worry the ECB that despite the recent moderation in Eurozone economic performance, the EUR has largely remained unresponsive.  The evidence suggests that the EUR strength is contributing to the recent slowing in European economic momentum.

We should expect Draghi to highlight strength in the EUR as a risk that requires monitoring, if not something more pointedly linking recent moderation in the outlook to the EUR.

There is likely to be little change in Draghi’s introductory statement at the meeting this week; much will hinge on the tone of his press conference.  He is likely to give few hints on what policy intentions are after the current QE program ends in September.  He will probably also leave open the timing of when the ECB will make up its mind.

He may indicate that much depends on the developments over coming months.  In this context, he is likely to highlight the risks to growth from protectionist trade policies and the strength in the EUR.

The opportunity is there for Draghi to sound confident, but more cautious.  This may extend to five ECB meetings in a row that the EUR weakens on the day.  This time it could have a more sustained impact considering the EUR is testing key support.