USD peaking with the economic and political cycle

Out-performance in the US economy, as was seen in 2018, seems much less likely in the year ahead.  Lower oil prices and slowing high tech sectors will dampen activity and assets in the US more than many other developed and EM countries.  The boost to equities and growth from US tax policy has passed its peak.  US politics is set to become increasingly partisan over the next two years of the Trump administration.  US trade policy has softened in the wake on the sharp fall in US equities in Q4.  Several EM countries have resolved their deep political distractions, and their economies have improved since mid-year.  We can see the USD reversing more of its gains in the last year as the global economic outlook stabilises and the Fed enters an extended pause in rates policy.

The USD has turned down in recent weeks led by several emerging market currencies, following on from rallies in gold and JPY in the context of a swoon lower in US equity markets.  More recently commodity currencies are strengthening.  The laggards are some high tech export currencies like TWD and KRW. EUR and GBP have also lagged, but they too have firmed from lows. 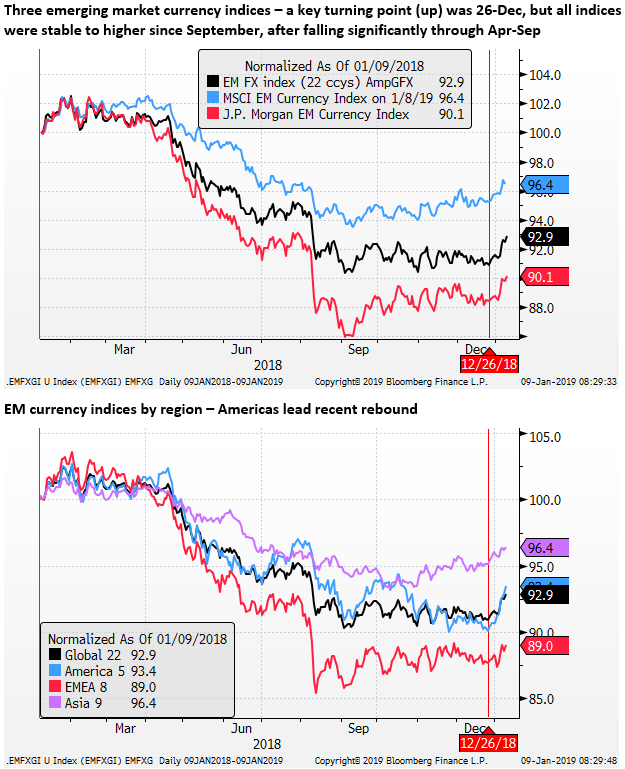 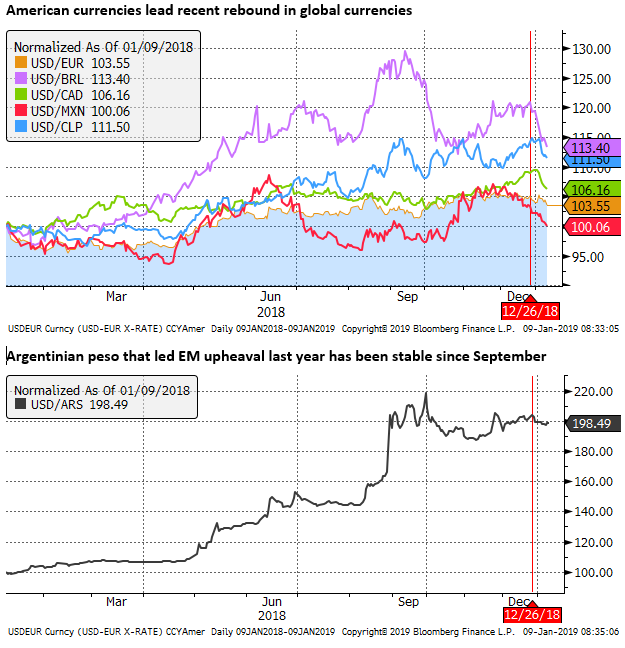 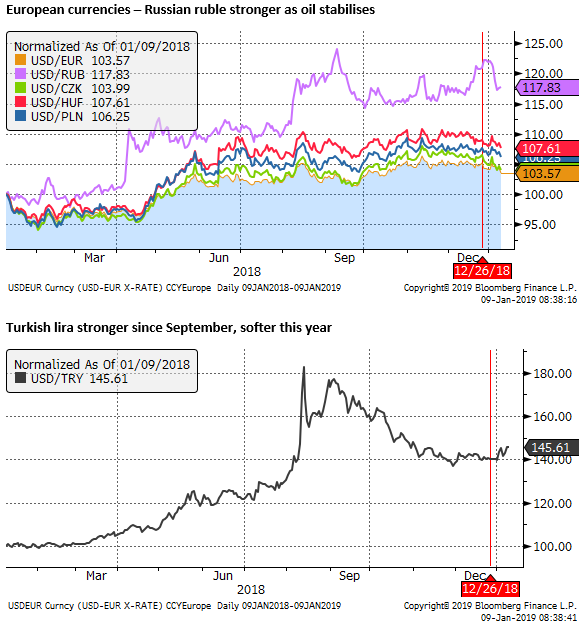 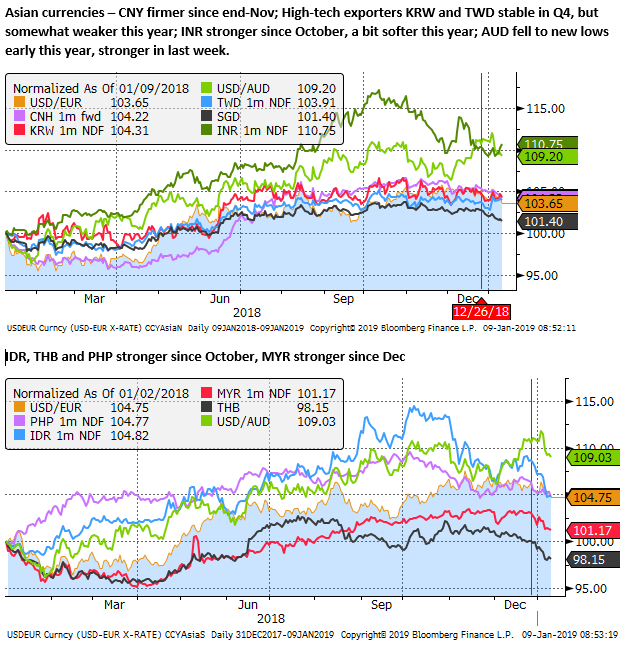 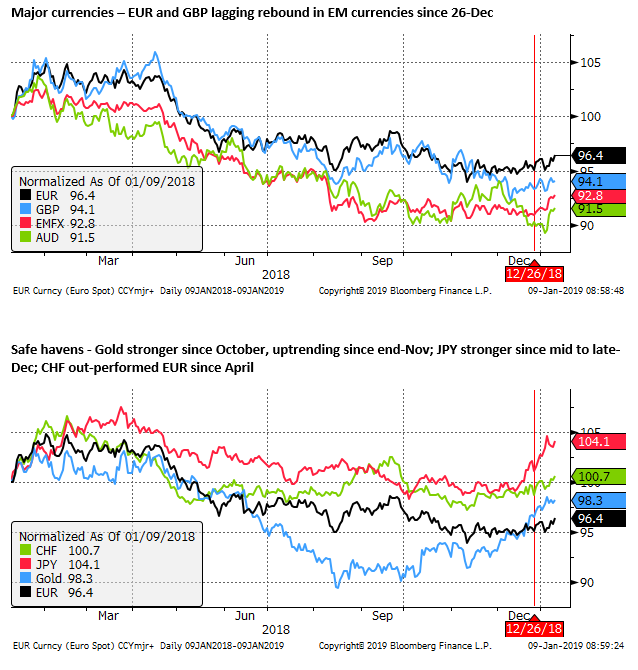 Emerging market financial market upheaval from April through to around September was a dominant theme in currencies.  Weakness in Turkey and Argentina were key elements, but also Brazil, South Africa and Russian markets experienced significant weakness.  Key factors were weak external and fiscal balances and domestic and geopolitical risks.

EM equities were notably weaker than US equities from around April to September.  US equities rose to a peak for the year in early-October, keeping the Fed on a rate tightening path, pushing up US yields and boosting the USD against EM currencies.

However, in Q4, the USA led global equity and credit market volatility.  EM markets were also volatile but were showing relative stability.  US equities slumped to a recent low on 25-Dec, while EM equities held above their lows in October. 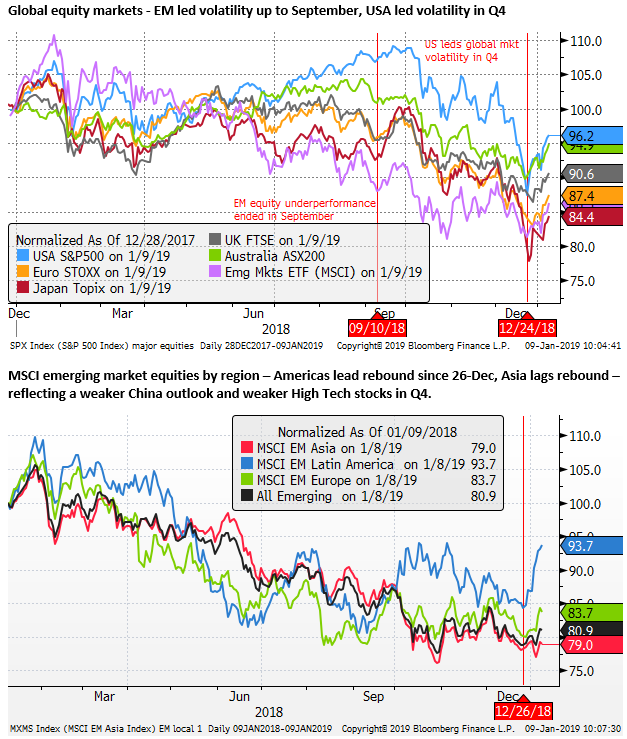 EM risk has dialled down, while political and economic risk rises in the USA

Investors had been forced out of long EM positions through the year to October. In Q4 the market started to see the negative feedback from weaker EM economies to the US economy and markets; forcing a shift in the Fed stance, albeit belatedly after hiking for a fourth time in 2018 in December.  The Fed is now largely seen in an extended pause.

Having exited EM assets and currencies, investors are in a position to cautiously return and do not necessarily need a rock-solid case for growth to increase their exposure.  As such, even though global growth concerns are more elevated than a year ago, they have improved in many cases in recent months, especially relative to the US economic outlook that has retreated in recent months.

Domestic and geopolitical risks have been significantly dialled down in several countries including Brazil, Russia, Turkey and South Africa.  On the other hand, political risk in the US has become more elevated as a government shut-down lingers and policy becomes distracted by border security.

Furthermore, while manufacturing PMIs have deteriorated in developed counties and China, they have shown strength in India, Brazil and Russia. 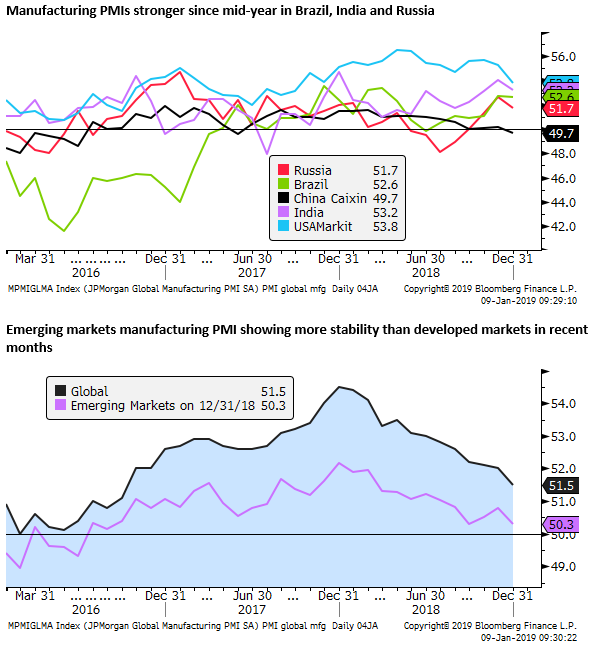 China has been a drag on global growth confidence

While many EM markets were showing relative stability in Q4, Chinese equities were relatively weak.  Confidence in the Chinese economic outlook has deteriorated.  A key issue is the US-China trade dispute that appears to have dampened economic confidence in China.  However, the decline in shadow-banking finance appears to have significantly tightened financial conditions for the private sector.

The Chinese equity market decline generated a negative feedback loop through Q3 on private sector finance via the forced selling of shares pledged as collateral for business loans.

China remains a key risk for the global economy.  Overall economic indicators have slowed to the lowest growth rates since the 2009 global recession.  The rate of growth still seems solid, reported above 6%, but the fall in global indicators of trade growth that have largely stagnated in a number of large export-led economies; including Germany, Japan, Taiwan and Korea, suggests that the slowdown in demand from China may have been more severe.

China has eased monetary policy significantly and announced tax cuts and fiscal spending plans for this year.  It has also introduced measures designed to support the stock market and improve access to finance to the private sector.

China is facing major structural impediments to reviving its economy.  High levels of corporate debt and over-capacity in some sectors dominated by state-owned enterprises suggest that China cannot afford to over-stimulate its economy and must remain focused on addressing structural and financial issues.

Both China and the USA appear to be more willing to negotiate a trade deal, motivated by the severe weakness in their equity markets through the year in China and in Q4 in the USA. 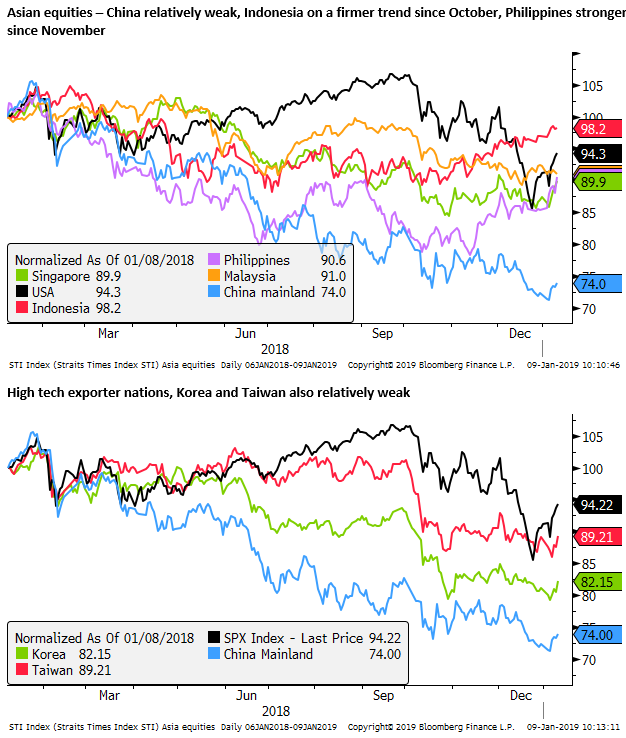 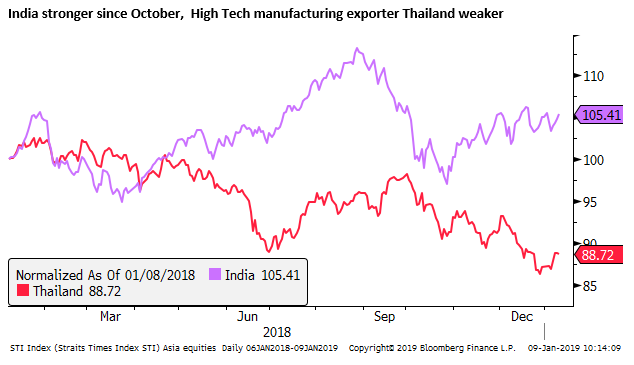 Tech Sector a drag on the USA and Asia

A factor weakening both the USA, Chinese, and several other Asian countries assets in recent months appears to be evidence of a peaking in long term growth in demand for high tech hardware, in particular smart-phones, and in turn, semi-conductors.

The big high tech and related consumer discretionary stocks that have led global equity markets over recent years; including the so-called ‘FANG’ stocks have been major contributors to the correction in global equities.  This has dragged down US, Chinese and Asian equities more than in other regions in Q4. 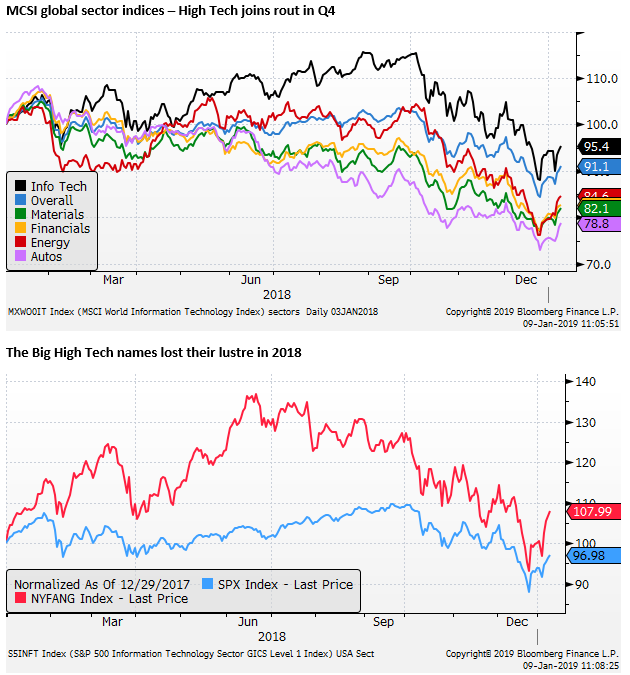 The energy and commodity sector came under significant pressure at around the same time as US equities and yields peaked in October. 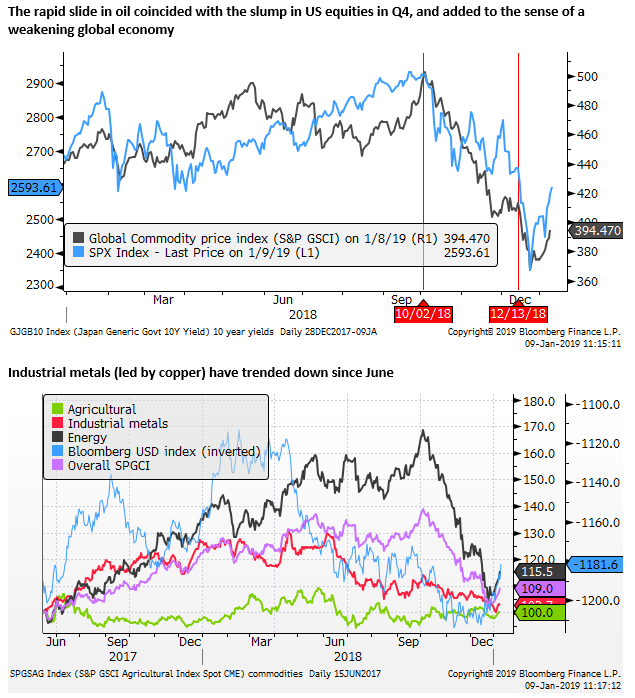 The fall in oil prices has contributed to a weaker outlook for the US manufacturing sector and weaker global inflation expectations.  This has probably been a significant factor in leading the market to see an extended pause in US interest rates. 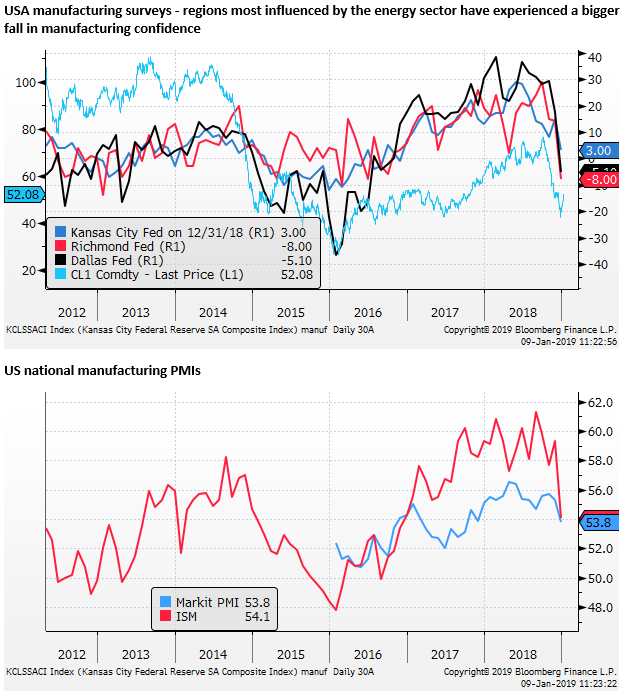 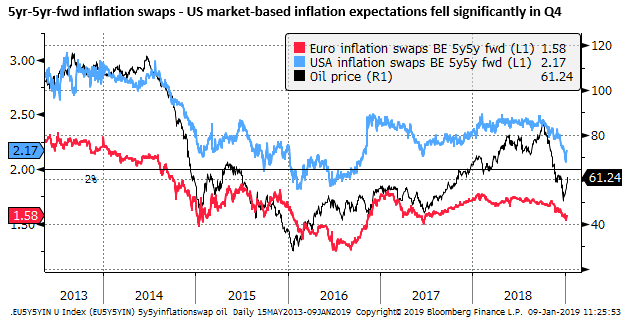 Fed fund futures are pricing in essentially no further rate hike through 2019, and risks are biased towards rate cuts in 2020.  This is a significant fall more than two further hikes in 2019 (in addition to the December hike) priced in at the peak in rates in November. 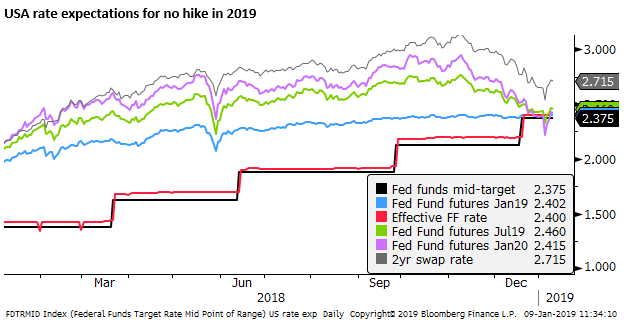 The Fed appears to have been shaken by the volatility in Q4 and the steeper fall in US asset prices and commodities following what now appears to be an ill-conceived further rate hike in December.  Their statements suggest that they are now in a mind to help stabilise financial markets and prevent a fallout to economic confidence.

This suggests that it will take a period of more stable and improved equity market performance and ongoing strength in real economic data before they hike rates further.  An extended pause in US rates now appears likely, and this may help support the recent trend towards stronger emerging market assets and currencies.  More generally we might expect further unwinding in the strength in the USD over the last year.

A peak in the US economic cycle

The US economy may have reached peak growth and equity market out-performance in 2018.  The corporate tax cuts supported equities directly, and the overall fiscal expansion boosted economic growth.  The positive effects of this stimulus are still playing out, but they are likely to be past their peak.  As such economic growth and activity indicators are likely to show weaker growth over the coming year.

Furthermore, the lower oil price and slowing tech sectors are likely to have more of a dampening impact on the US economy and equities than many other developed and emerging economies. 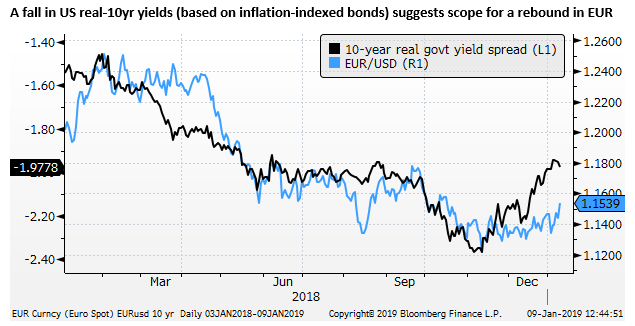 The political situation in the US also appears to be a potential drag on the US economy.  In 2017, the US economy and USD exchange rate were subdued in part because the Trump administration was focused initially on healthcare policy causing division in Congress and distracting policymakers away from tax reform.  In December 2017 tax reform was passed and the benefits for the US economy, equities and the USD were most apparent in 2018.

However, Congress is now more divided with Democrats in control of the House.  The Trump political agenda has shifted to border wall funding, and this has led to a government funding shut-down.  There is a risk that this issue continues to drag on for some time and distract policymakers from other policy that might otherwise do something to support economic growth; such as infrastructure spending. The shut-down, if significantly prolonged could also more directly dampen economic confidence in the USA.

President Trump remains a highly divisive figure in US politics.  It is possible to see partisan politics become increasingly poisonous over the next two years of Trump’s four-year term, with little substantive achieved in government.  This could undermine confidence as the economy loses momentum and fiscal balance worsens.