Watch out for dovish noises from the Fed and RBA

We see scope for dovish noises from the FOMC minutes and Fed speakers.  The Fed appears to be in the process of shifting towards adopting an average inflation target, which should make them more sanguine if inflation rises above the 2% target and more responsive to signs that economic growth may be slowing.  We expect no substantive changes in policy guidance from the ECB this week.  The RBA has opportunities in a speech and the financial stability review this week, and its minutes next week to flesh out what appears to have been a shift to an easing bias earlier this month.

Fed appears to be shifting to an average inflation target

We are sensing a round of relatively dovish noises from the Fed. On Wednesday, the 20 March FOMC meeting minutes are released.  The 20 March meeting was a dovish event where the FOMC median rate projection removed hikes for the current year and announced that it was slowing and then ending its quantitative tightening in September.  Chair Powell emphasized patience and noted that “we’re really ten years deep in this, almost ten years, in this expansion, and inflation is still kind of, I’d say not, you know, clearly meeting our target.”

This last point on inflation appeared to be a nod towards the debate in the Fed towards adopting an average inflation target; such that the Fed might in future actively seek to run inflation above its 2% target to compensate for periods of below 2% inflation and achieve 2% on average.  The argument alluded to by Powell in his 20 March press conference was that the Fed should adopt an average inflation target to ensure that long term inflation expectations, so important for anchoring inflation, do not slip below the 2% target.

It might be a stretch to expect this discussion to appear in the FOMC minutes on Wednesday, but it is certainly not out of the question.  It is an idea that was advocated by influential Vice Chair Clarida in February this year when talking about the Fed’s Review of Its Monetary Policy Strategy, Tools, and Communication.

Clarida is speaking today at a “Fed Listens Event”.  These events are scheduled as part of the Fed’s Review of its monetary policy strategy, and this might be an occasion where Clarida again floats this idea.

The bottom line is that the Fed may already be moving in this direction, and this may already be a part of its willingness to be more patient on rates policy.  It may also be quicker to ease policy should it sense that growth in the US may be slipping below trend.

The implication is that the Fed appears to be in the process of shifting into a more accommodative policy framework that should tend to raise inflation expectations and set the USD on a weaker path than it would otherwise follow.   The current relative strength in the US economy may be supporting the USD, but dovish noises from the Fed may be more prominent this week, potentially undermining the USD somewhat. 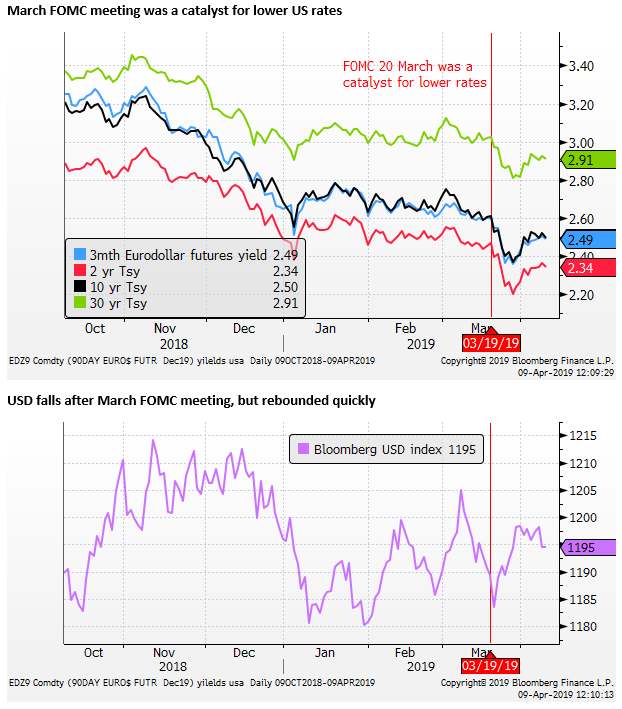 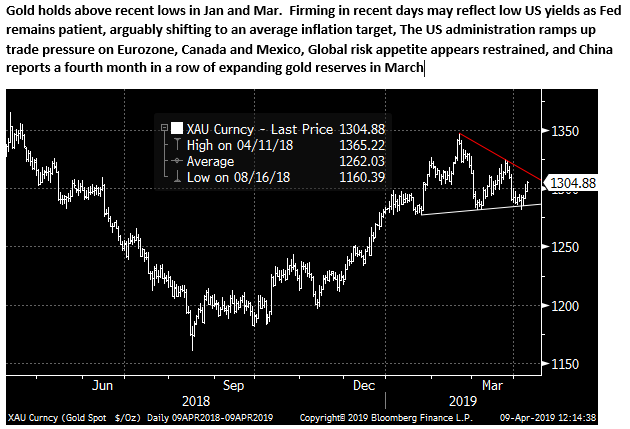 No change expected at the ECB meeting

The ECB meeting is also slated for Wednesday.  the EUR weakened after the previous meeting on 7 March.  At that meeting, the ECB lengthened its guidance on the period over which it expects to not hike rates out to the end of this year, announced plans to reintroduce its TLTRO funding operations for banks, and restated that the risks to the outlook are tilted to the downside.

Over the period since this downgrade, the outlook for the Euro region remains challenged, but there have been some signs of stabilization, in line with their baseline outlook.  As such we do not expect any new dovish surprises at this meeting.   It is possible that the ECB announces further details related to its TLTRO(III), but these are planned to start in September, and ECB might prefer to wait until its 6 June before finalizing these details. 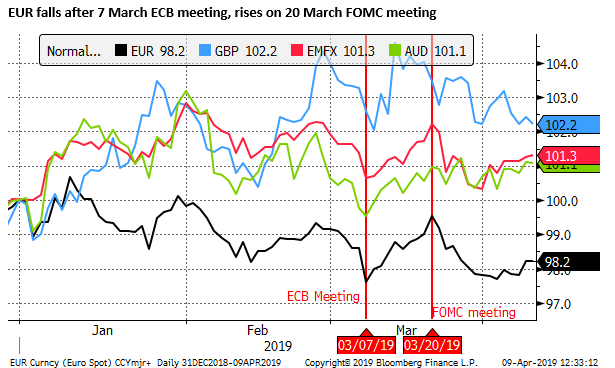 RBA may flesh out an easing bias

On Friday this week, the RBA releases its semi-annual financial stability report.  We see a risk that the RBA alludes to a shift to an easing bias, or emphasizes the downside risks related to a slowing housing market.

The RBA monthly monetary policy meeting statement released on 2 April alluded to a shift from a neutral to an easing bias.  As we discussed in our review of the statement:

We might learn more about the RBA’s views from the minutes for that policy meeting released next week.  However, if the RBA has shifted its risk assessment it might also discuss this in its  Financial Stability Report on Friday.

On Wednesday, RBA Deputy Governor Guy Debelle also speaks on “The State of the Economy”.  The topic opens up the prospect that Debelle also puts more flesh on what appears to be a recognition of a shift in the balance of risks for the economy towards the downside.

The IMF World Economic Outlook released on Tuesday downgraded its GDP forecast for Australia in 2019 from 2.8% made in October to 2.1%, in a year over year comparison.  For Q4 this year it projects GDP will be 2.3% higher than the last quarter of 2018.  However, the IMF sees growth rebounding in 2020 to 2.8%.

The Government budget GDP projection released on 2 April looks more like the IMF projections, although presented on a financial year basis for years ending in June.  It projected growth of 2.25% in 2018/19, recovering to 2.75% in 2020.

The market anticipates that the RBA will downgrade its 2019 growth forecasts in its 10-May quarterly Statement on Monetary Policy (SMP), incorporating the weaker than expected Q4 GDP outcome that it had not yet received before its February SMP.

Nevertheless, the size of the IMF downgrade to its 2019 Australian forecast is telling and might hint towards the extent that the RBA has tilted its outlook in the last month.  The IMF staff liaise closely with central bank and government departments when making their projections.  While they have their own mind, their views may be a hint towards the thinking at the RBA.

The AFR.com reported on its discussions with the IMF Australian economist, and the message was that the downgraded growth outlook in 2019 reflected a greater than anticipated downturn in the Australian property market. (‘Delicate’: IMF warns on property slide; 7 Apr – AFR.com)

This is a widely discussed drag on the Australian economy, and hardly a surprise, but it might suggest that the RBA too is seeing increased risks arising from the housing market, and is now more prepared to cut interest rates further than it was earlier in the year. 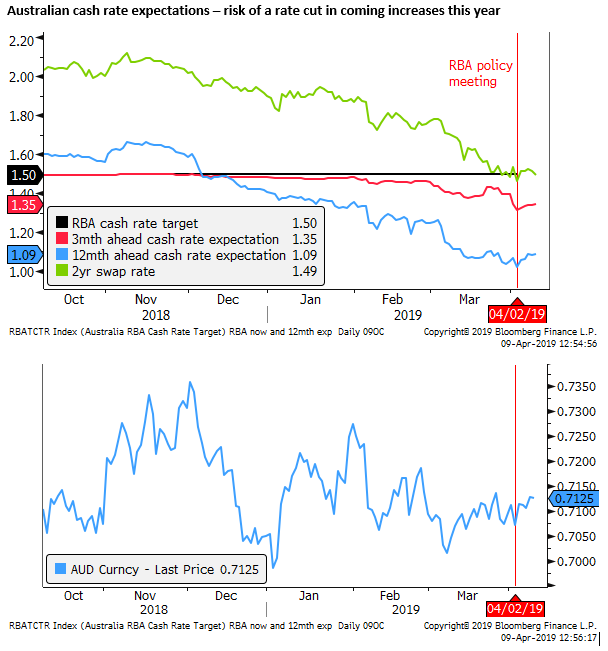